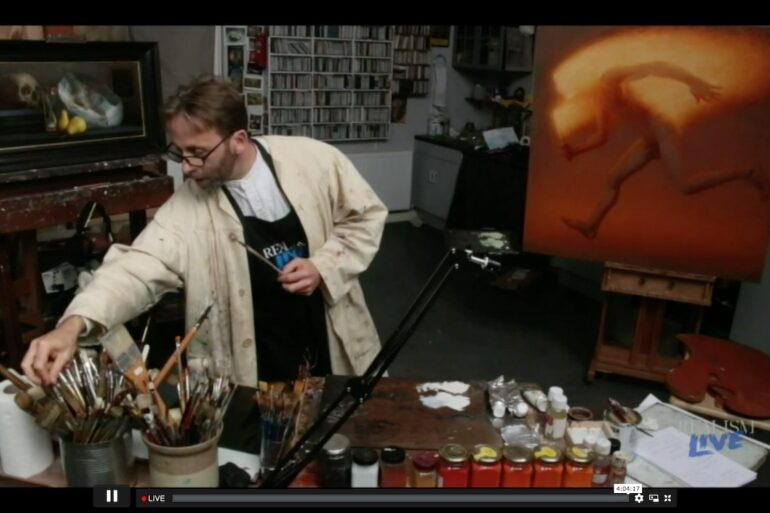 Realism Live attracts people from all over the world who connect at any time of the day or night – for good reason – to attend this extraordinary convention. It is the ambitious English landscape artist Erik Koeppel to inaugurate the second day of Realism Live, who on the occasion of the demonstration proceeds in the execution of a dramatic mountain landscape that is composed of layers on layers in a continuous comings and back that allows him to faithfully reproduce the image and feelings that the landscape has aroused in him. Erik Koeppel is an advocate of the revival of the techniques and philosophy of the Hudson River School and as he himself says: “for me painting is a conversation between me and nature (…) After years of drawing and painting live you can understand how you can represent the emotions that nature arouses in you through the experiences you have made from reality”. A conversation undoubtedly capable of arousing emotions – I add – and which manifests itself magnificently on his canvases: Turner’s search for the sublime, which reappears in the mountain image of the wilderness represented by Koeppel.

An intense conversation followed that between Peter Trippi and Daniel Graves. Graves is a character who needs no introduction: he is the founder of the Florence Academy of Art opened in the city of Medici about 30 years ago. The driving force behind the Florence Academy of Art, which has about one hundred full time members from 30 countries in the world, of which only 5 Italians (these numbers make Italians reflect), is based on the teaching of the basics of classical drawing, a subject that the well-known state academies of art no longer take care of properly and which is based on three simple rules: proportion-design-translate. A conversation but also a historical review among the greats who have contributed to make the study of canons and proportions, light -the shape- and shadows -the atmosphere- fundamental, because as Master Daniel Graves says “between the past and the present there is a thin thread that binds them in which everything is connected”. Thanking him for letting us “peek” into his studio we congratulate him on his latest work “Pygmalion” which reverently looks at Ovid’s Metamorphosis in the form of a splendid woman capable of continuous renewal in a century of great changes.

The Irish Conor Walton has left no room for real demonstrations by pointing the spotlight on the technical analysis of pigments, two in particular: black and white, the latter is defined by some as non-color and someone else praises its presence to obviate strange forms of scaramanic. Conor, a scholar, teacher at Conor Walton Summer School, but before that an artist, about black, which he considers fundamental among the colors, says that: “without black there would be two big problems: you could not achieve the most intense black and you could not get many other shades of color. In addition to demonstrating the three varieties of white (Titanium white, Lead white and Zinc white) and black (Ivory black, Mars black and the recent Spinel black, powdered) and their reaction to the drafting and their combination if mixed in equal proportions and in the presence of a solvent. Conor Walton as an excellent artist – his curriculum says it all – produces his own colors by finely grinding the material to a fine powder. A work that if well done can certainly be positive, however, we must remember that the process is long and laborious because it is done by hand, for hours, with a mortar.

We are all apparently allergic to critical sessions but their importance is all the more important if done by a professional. Realism Live also offers this opportunity.  From the analysis of the works subjected to criticism that Mortenson has however specified to define “great works” the major problems are found in the anatomical elaboration of the drawing, in perspective and in the variation of the color value. Canalize yourself: books, tutors in hand but above all a lot of practice: “Keep painting everyone”, as Mortenson says!

A big surprise is that of Stephen Bauman, originally from Tennessee, who moved to Miami where he actively participated in reviving the street art of the city with his brother. Bauman studied in Italy and now lives in Norway with his wife. His dialectical ability, generosity in dispensing advice is as remarkable as his technical ability. His palette is limited and “proportion, construction and lightness” are the guiding principles of his work. For those who follow him offers three tips: knowledge of the drawing; good organization of the palette and work materials and the third, a middle way between the notice and the advice the use of the materials he used in the demo are absolutely customizable and consequently he says:” dare and try: there is no guarantee if not that of his own production”.

It is with a gentle gesture that Juliette Aristides concludes the convention by representing, in sight-size, a charcoal classic by P. J. Proudhon, an artist studied in art ateliers. The world of ateliers is not unknown to Juliette Aristide because in addition to having studied as an artist she is also the founder of the Aristides Atelier at the Gage Academy of Art in Seattle, Washington. Both Proudhon’s work and the representation of a live nude for which the sheet has been dusted with charcoal, are a continuous running of reference lines and diagonals that intertwine to make room for the rounded lines, shadows and lights that define the shapes of the model. “In art there is an extraordinary opportunity to celebrate the nude, a custom that goes back to ancient times and that with wonder leads us to represent the nude still today discovering every time the beauty inherent in the figure” says Aristides. The sight-size process, is exactly the one proposed by Charles Bargue and studied in the atelier and requires time, accuracy and continuous control of measurements, angles and proportions because the foundaments of the drawing are the most important part of the artistic process.

A concept this repeated endlessly in these two days of convention that Realism Live allows you to put into practice both during the session and at the end of the daily convention in which all participants are invited to put into practice the concepts imparted and to move their work on the social media  taking care to attach the hashtag #realismlive.