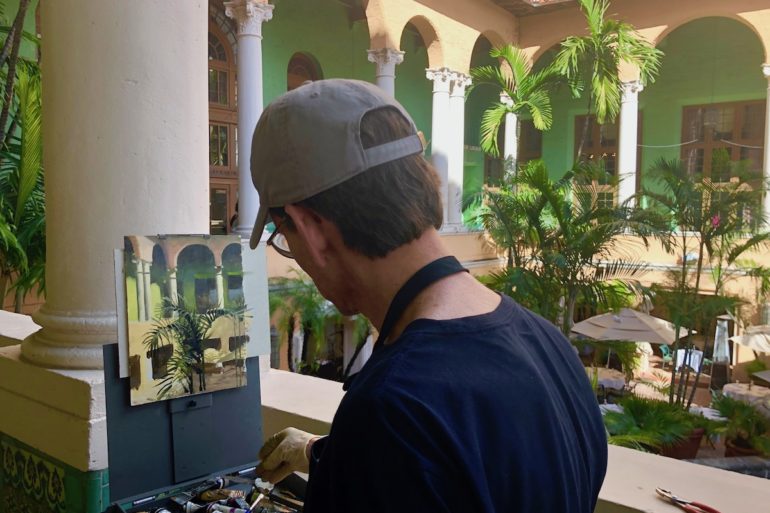 I got the opportunity to meet Sprick in the hotel lobby where I asked to have the chance of interviewing him and shortly after I was at his side to admire the unscheduled execution of a plain air work in the central court of the Biltmore Hotel between arches and palms: a silent soul that puts before words the gaze that spaces undisturbed between the landscape and the canvas while his hands become the visual extension of his artistic sensibility perfectly in tune with his extraordinary eye-manual coordination.

Daniel Sprick was born in Little Rock, Arkansas and lives in Denver, Colorado. His artistic dedication dates back to his early childhood when at the age of four he drew airplanes with his father. And it’s at the age of 20, after begging his parents to allow him to study art, that he enrolled at the AA-Mesa College Grand Junction, Colorado in 1973,

where he later continued at the Ramon Froman School of Art, founded by Froman himself, Sprick’s master, specialized in oil painting and winner of numerous prizes including the American Artists Professional, the Best Portrait award in New York City and the Gold Medal Award. Froman brings him closer to the cutting and illusionist lines of J.S.Sargent, and to the paintings of Van Dick, Frans Hals and Roger van de Weyden, combining the technique of sublime artistic execution of these painters and elements of modern nature. His other mentor, as well as master, was Harvey Dinnerstein, who in addition to exhibiting in the the largest museums in America and having received an honorary doctorate from the Lyme Academy College of Fine Arts in Connecticut, has been a very influential teacher for several generations of students at the National Academy of Design and the Art Students League.

Daniel Sprick’s favorite picture, the one he felt more in tune with because of  “The absolute intensity of intent and the pursuit of beauty and truth “ was, the Crucifixion and the Last Judgment, probably a diptych of small dimensions by Jan van Eyck, found at the Metropolitan Museum of Art in New York. 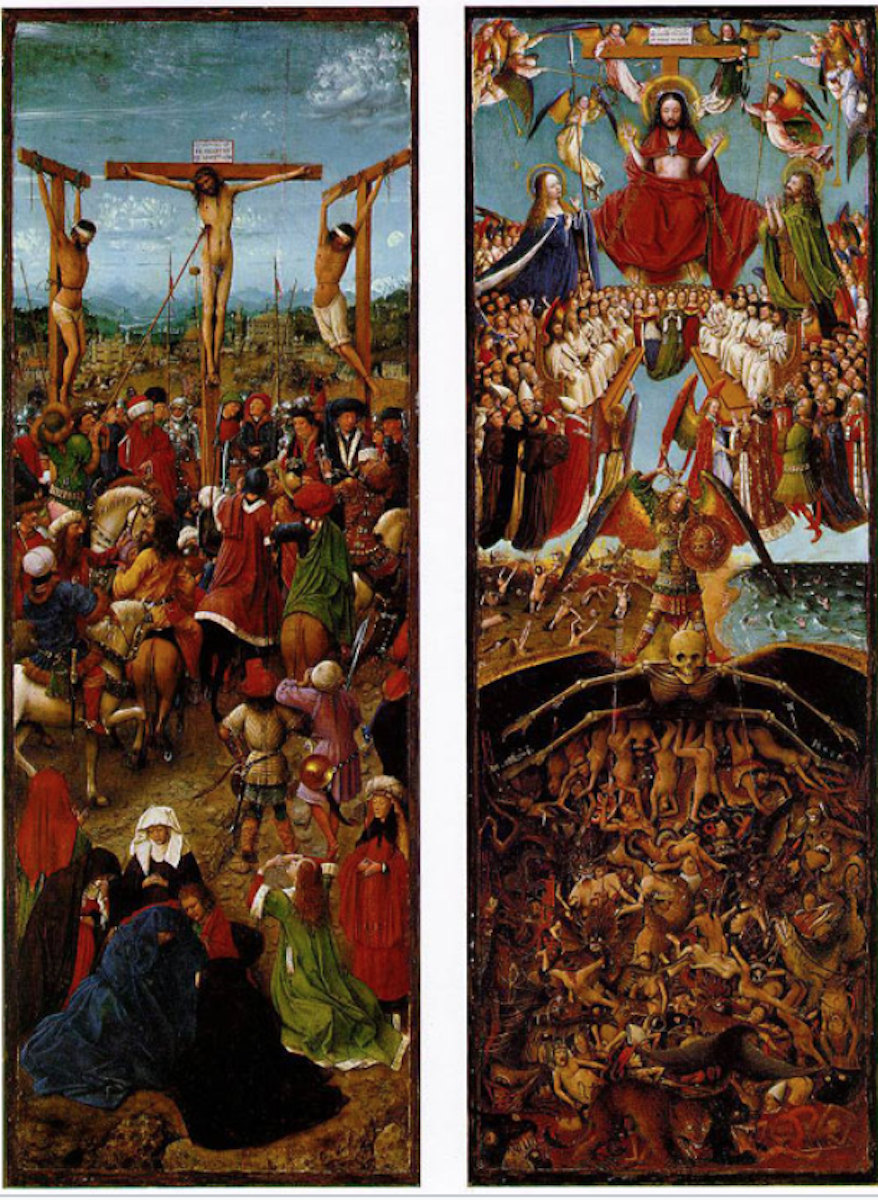 The art of Daniel Sprick passes, without ever lowering the level of intensity and magic, through the plain air landscapes that he studies based on the great classics of the past getting to building his personal style from South Western influences and that bring the individual to reconcile with his primitive instinct of primordial nature, portraits and still life in a way so sublime as to be able to find also in the domestic scene of a vacuum cleaner leaning against the wall, of forgotten eggshells or broken plates on the table, a sense of vitality that loads the scene in perfect antithesis with the term itself of “still life”: it is as if the objects painted by Daniel took life as we, spectators were there pick up the pieces. 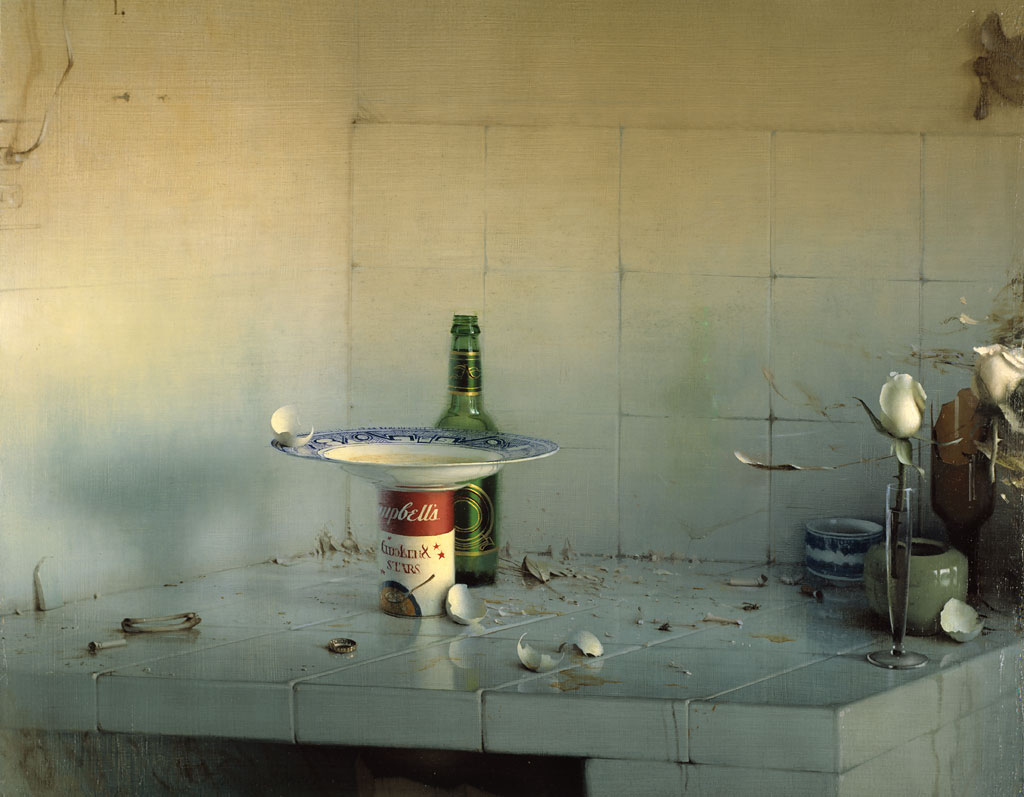 Static scenes from realism so pure as to seem alive.

In 1976 Sprick enters the National Academy of Design in New York where some of the most famous artists studied and in 1978 he graduates from the BA-University of Northern Colorado in Greeley.

He has several personal exhibitions in private galleries and museums including the Denver Art Museum, the Hunter Museum of Art in Chattanooga, the Aspen Art Museum in Aspen, as well as numerous private and public collections selected, appearing at the National Museum of American Art, and at the Smithsonian Institution in Washington DC.

In the 1970s he devoted himself to painting en plein air in New Mexico, living under the bridge wanting to grasp life at its extreme, in order to see life from the extremes in order to understand the middle parts” and that will allow him to understand that “there was nothing, and only then was something “, referring to the simple and undisturbed essence inherent in everything.

In the ’80s he devoted himself to botany with the same minuteness in the care of details.

He usually paints on masonite or plywood composed of wood fibers previously prepared with a polymeric acrylic primer and plaster, used for smaller jobs on which he squirts in pencil before starting to paint. While large works are studied with preparatory drawings: sketches over sketches as did the masters of the time, in order to have a global vision of the work.

Being an artist for Daniel Sprick means first of all breaking down preconceptions: only in this way it is possible to get to the essence of things allowing him to extrapolate subjects and objects from scenes or stories to put them in contemporary contexts. A wonderful example of this process is given by the study of the old Hebrew testament and of the new Catholic testament, his family’s creed, in which he interprets the central event of the Resurrection by setting the background in the Denver landscape in an absolutely natural and contemporary way. Just as contemporary are the expressions of the faces of the two women who participate in the miracle. 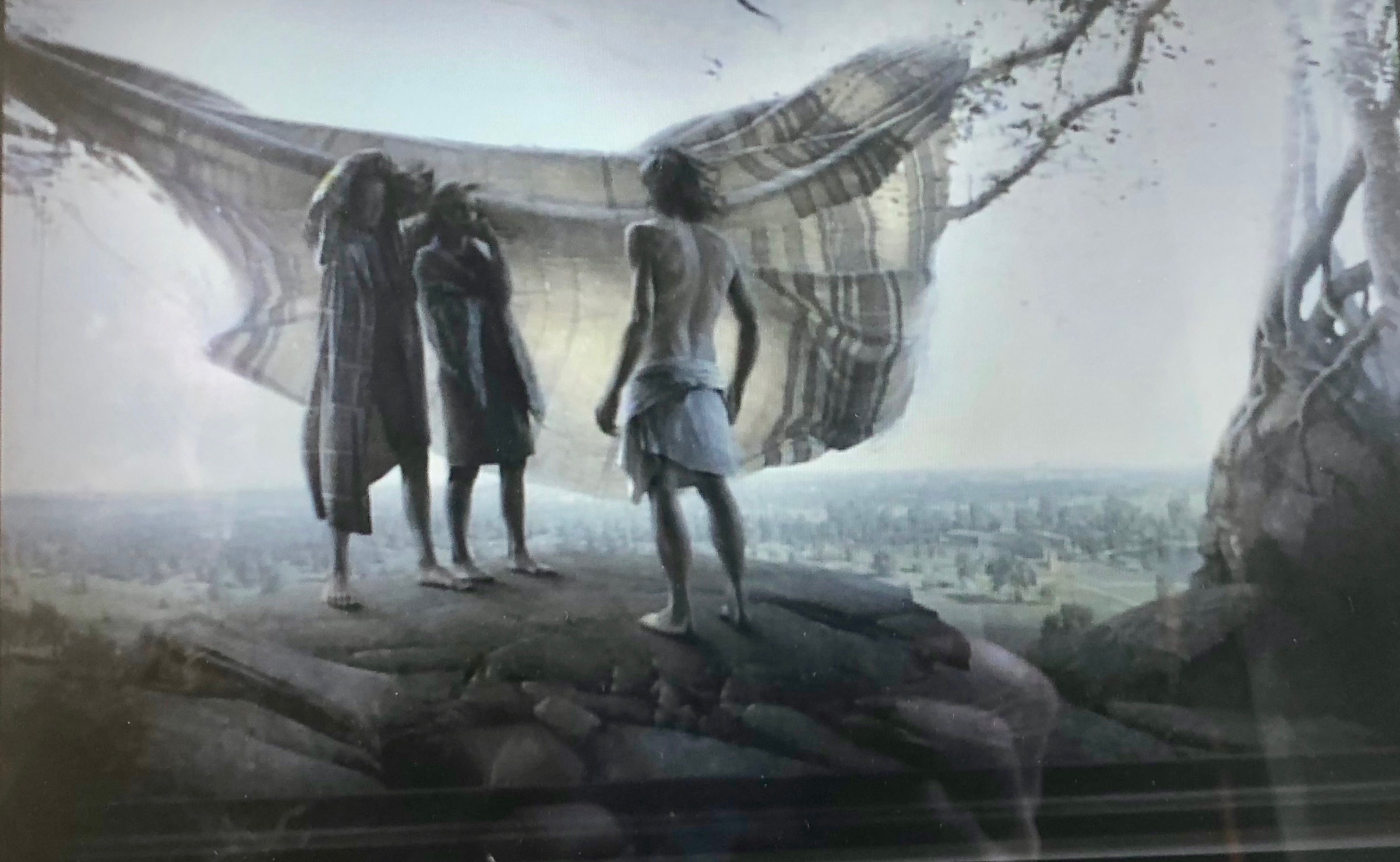 His way of approaching reality, ranging from landscaping to still life, to botany and portraiture is so realistic that sometimes it is difficult to believe it is a work of art rather than a photograph.

Being one of the most important realistic painters of our century, Colorado Public Television and the Museum of Outdoors Arts has dedicated a documentary entitled “The pursuit of truth and beauty” produced by David Schler, as a sign of recognition for this soul devoted to the technical virtuosity whose art range is so extensive, keeping intact the meticulous characteristics that distinguish it. In the documentary, in addition to Sprick, family members, art critics, curators and collectors who unanimously reveal one of the more delicate and profound voices of our time, “who has destined his life to art”. Art that for Daniel Sprick is the air that allows him to live, the primary need that nourishes him and that with his curiosity pushes him to know and to get to the heart of things.

I was struck by the story of a beautiful horse found dead in the woods close to home, to which Daniel decided to give a second chance, reconstructing the skeleton and

inserting screws that would allow him to move it at will. The horse is currently present in the study of the painter. This event could be considered on border line in between madness and genius.

Madness that is swept away in the observation of his portraits: “Never let facts get in the way of a good story”. This is the case of the painting in which two, probably homeless men, were in search of a bottle of wine. To him they represent the prophet, the guide that leads him to research the essence. The realism with which they are painted evades every doubt and supports the thesis. 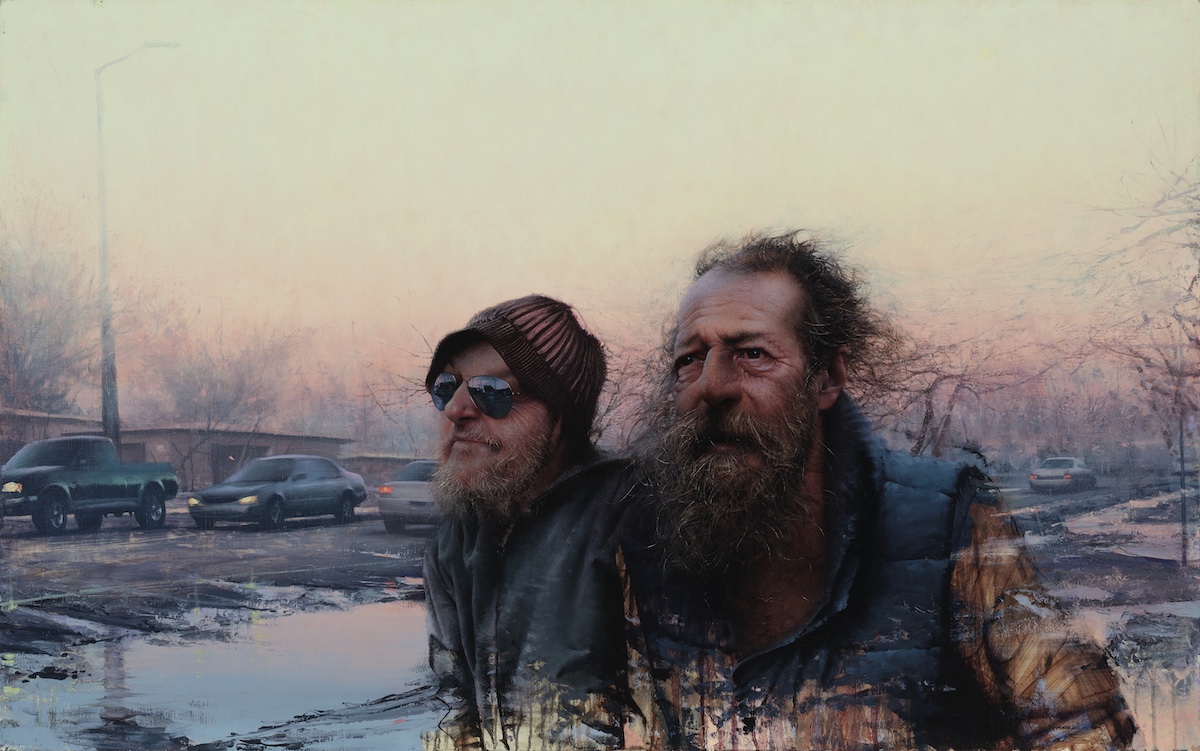 The demonstration of the making of a portrait of Sprick has closed off the four days of convention: his strokes like music played on the piano in the background, are accompanied on the canvas like notes on the pentagram and following one another, touch by touch, they compose the melody and the painting reaches a level of expressiveness such that only precious souls endowed with an extraordinary sensibility have access to. 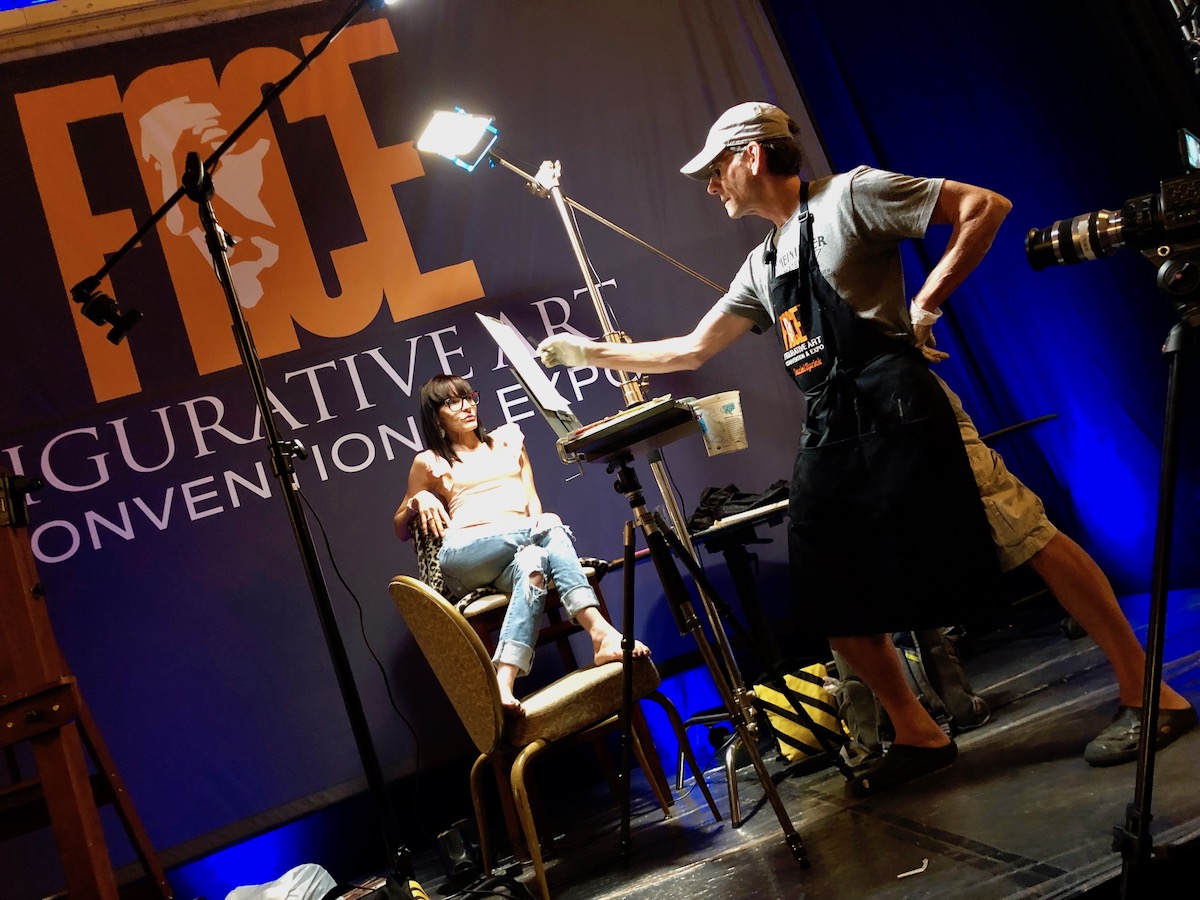