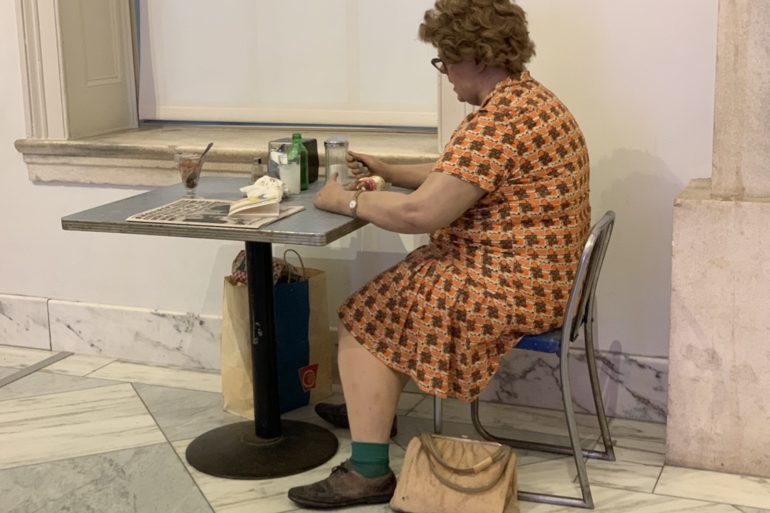 Let’s call it hyperrealism, radical realism or new realism: the undisputed protagonist of the issue are Duane Hanson’s sculptures. I admit that the first times I saw Duane Hanson’s works I was perplexed: I was in Palm Beach, on the famous Worth Avenue and from the window of a gallery I saw a policeman in uniform, I observed him for a while and approached him nonchalantly: only after having observed him (from a distance) the amazement of perfection literally glued me to the window. The same thing (although I admit that I was already prepared for the theme and the artist, since I had studied the character) happened to me at the Nelson Atkins Museum in Kansas City, MO, again with a guard in uniform, and more recently at the National Portrait Gallery in Washington, DC. – part of the Smithsonian America Art Museums- where I had the pleasure of meeting the “Woman Eating”. When in the distance I saw this big fat figure so obese and lazy in the distance, with her gaze lost in nothingness (or in thoughts, who knows?) eating an ice cream between a can of 7Up and another cup already finished, my radars were activated and I spent the rest of the day (by now it was over fortunately otherwise I would have lost the rest of the exhibition at the museum) in the company of the lady even though I didn’t have a seat next to her.

Duane Hanson was an extraordinary artist and sculptor: born in Minnesota, he spent most of his career in Davie, South Florida, although he had a place of honour in the New York scene on the famous Bleecker Street, Duane Hanson found Florida the right place at the right time: so full of people in Bermuda shorts and floral shirts, the right characters to inspire his work. After attending Luther College, the University of Washington, and graduating from Macalester College in 1946, he taught art in high school, before taking a Master of Fine Arts degree at the Cranbrook Academy of Art in Bloomfield Hills in 1951. In 1966 he started making figurative casts using fiberglass and vinyl. Initially his works focused on strong and shocking themes aimed at shaking moral and social conscience.

Among the works of the period there is “Race Riot” of 1969/1971, which was almost completely destroyed except for the policeman who beats a black man and brings to light the themes of police brutality and racism. The work itself represents more the idea of Afro-American oppression which, if placed in its original context, highlights a cross-section of social warfare in which whites beat blacks and vice versa, and in which it is spontaneous to wonder who the real winner is when a struggle for freedom becomes a bloody battle. In 1970, Hanson took a radical turn and decided to abandon the bloody, disturbing and politically charged scenes to focus on the subtle atrocities of everyday American life: tourism, shopping, eating and idleness. He even destroyed part of his previous production in order to be remembered in this second phase.

His fat and unattractive sculptures are a fairly obvious social commentary on America and unlike his previous works, the sculptures of the second phase are single or coupled figures with an apathetic and bored effect, staring at nothing in the distance, completely disengaging themselves from their surroundings. Duane Hanson himself said in this regard:”My art is not about fooling people,” the artist explained. “It’s the human attitudes I’m after—fatigue, a bit of frustration, rejection. To me, there is a kind of beauty in all this.”

Moreover, the first works tended to be more spatially contained while the subsequent figures have no clearly defined boundaries that separate them from the spectator, so that they literally inhabit the spectator’s space to the point of even being disturbing because we are used to seeing the sculptures on a normal pedestal and in the canonical materials that can be marble, wood, bronze, while the sculptures by Duane Hanson (or by the Australian Ron Mueck, different in type but equally interesting) are totally different from the canons. And you know that people who are unprepared when they leave the comfort zone get scared by reaction.

Before his death in 1966, Duane Hanson created a special casting technique in fiberglass-reinforced polyester resins: he created casts of living people and then painstakingly painted the details in order to reproduce exactly the veins and stains of the skin. Bruce Helander, a rather extravagant character,  great artist and successful gallery owner, well-known in the American art world (and owner of the gallery to which I glued myself to observe the policeman) whom I had the pleasure of meeting at the NSU Museum in Fort Lauderdale, in a small essay-catalogue of the travelling exhibition he curated: “Real People-Sculpture by Duane Hanson”, which started in 1988/89 from the Fort Lauderdale Museum, he interviews the artist who describes in detail his artistic process: ”I take a polaroid photo s first with the model , to study variation of an idea and how they work with it. I used to just go into it but I now find this helps me study the exact pose . We make the mold out of flexible rubber ; the person is prepared with a grease . We do one body part at time. A plaster mold goes over the rubber and that rubber mold slips right out of the plaster one. Pieces are put together with small refinements made in refinishing. Then the works are primed with an acrylic primer. The paint is oil paint on the hard plastic figures. The hair is sewn into the flesh with a needle device”, while clothes are bought in second-hand shops or belong to the model.

Hanson’s works are in the permanent collections of the Whitney Museum of American Art, the San Francisco Museum of Modern Art and the Smithsonian. On the occasion of the Super Bowl LIV held in Miami in February of this year, the County of Miami-Dade exhibited at the Miami International Airport (MIA) the hyperrealist sculpture of the artist Duane Hanson “Football Player” on loan from the Lowe Art Museum of the University of Miami. But other works by Duane Hanson are on permanent display both at Fort Lauderdale-Hollywood International Airport (FLL), with the sculpture “Vendor with Walkman” located in the baggage claim area of Terminal 1 and at Orlando International Airport (MCO) which owns “The Traveller” from 1986, located in the lobby of Terminal A.

Among the various works to mention by Hanson is the iconic “Tourists” from 1970, which delicately represents the cliché of the over-dressed American tourist with a mixture of humour and compassion.

The figure of Duane Hanson is linked to Bruce Helander, who when he was still a student lost $50.00 on a bet he made with a friend who invited him to see the works of an “remarkably realistic artist” and after visiting his studio and air paid pawn, said of him: “I was promptly shocked into creative reality….with the right amount of skill and inventiveness there are a rare few exceptional artists who come so close to creating the real thing that the majority of viewers, do in fact mistake a work of art for a real life object. Their illusion becomes art as an adjunct to the craft of art making”.

When Bruce Helander then opened his gallery on Worth Avenue he exhibited and sold his work, seeing people enraptured and frightened by the realism of the sculptures. “Artists involved in realism have always been intrigued by the remote possibility that they could painstakingly create something so real that it might come alive. The only thing left out of Hanson’s real people is the warm breath of the subject: and some visitors swear they’ve witnessed a stolen breath”, said Helander. I don’t know about you, but I like to think this might be true…

2 thoughts on “Duane Hanson: hyperrealism that takes you by surprise.”