The Art of the Portrait, when the excitement of art comes alive with the presentation of extraordinary artists, workshops. and mystery and silent auction. 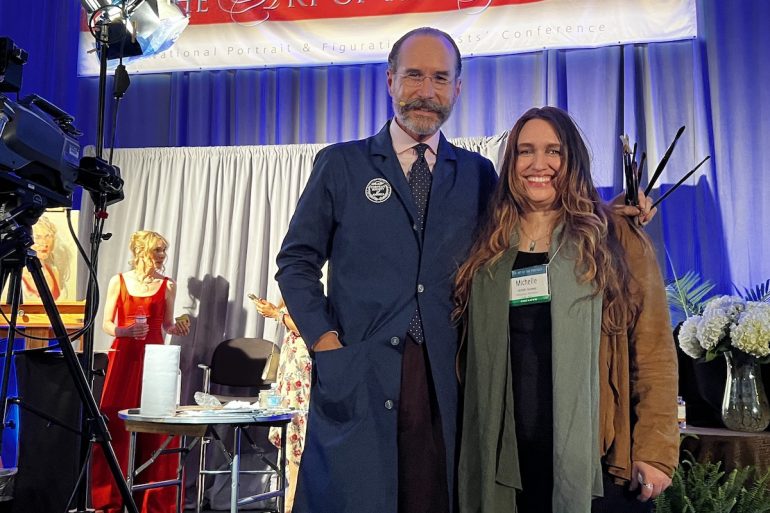 The warm welcome of Michael Shane Neal, chairman of the board of the Portrait Society of America, was followed by the melodious notes of the musicians who accompanied the words of Mary Whyte: a character much loved by the audience.

Mary Whyte, made a speech in a simple and sincere manner. In the same way with which she made the fifty portraits of America’s veterans, one for each state. She did it with honesty, mindful of the stories of the women of South Carolina, the area where she had moved in her youth to study. Whyte told about the travels she had made without anyone – except for those close to her – being aware of them: she moved all over America in search of witnesses. Those witnesses whose stories, sometimes dramatic, allowed her to rediscover the great love for the great motherland, the America. On the flow of Ennio Morricone’s melody, inspired by the film “Mission”, the artist told the stories of war veterans – for the most part Marines. Stories made of perseverance, courage and hope and that she wanted to represent without any prejudice of age or social background. Whyte’s body of work, constitutes the project: “We The People: Portraits of Veterans in America”, and was done entirely in watercolor on large formats that reach 10 feet.

Watercolor is in fact the preferred medium of the artist who considers it so challenging. Mary Whyte hopes that the works in the project can remain together in the future, as they were conceived and as it is presented in the book of the same name. Attendees of The Art of The Portrait had the opportunity to have the book signed in dedicated spaces at two times throughout the day.

Currently, after a traveling exhibition throughout the country, the works of the project: “We The People: Portraits of Veterans in America,” are exhibited at the National Museum of the Marine Corps, in Virginia.

The artist, strengthened by her personal experience in which the moments of discouragement were not lacking, encouraged the participants to overcome the moments of negativity and mentioning the phrase she used to repeat to herself -“Just keep going you have to finish what you have started”- The artist encouraged the audience to find their own originality in the search for the essential because as the artist stated, “It’s not so much what you put in the painting as what you don’t put in, to strengthen its meaning.” 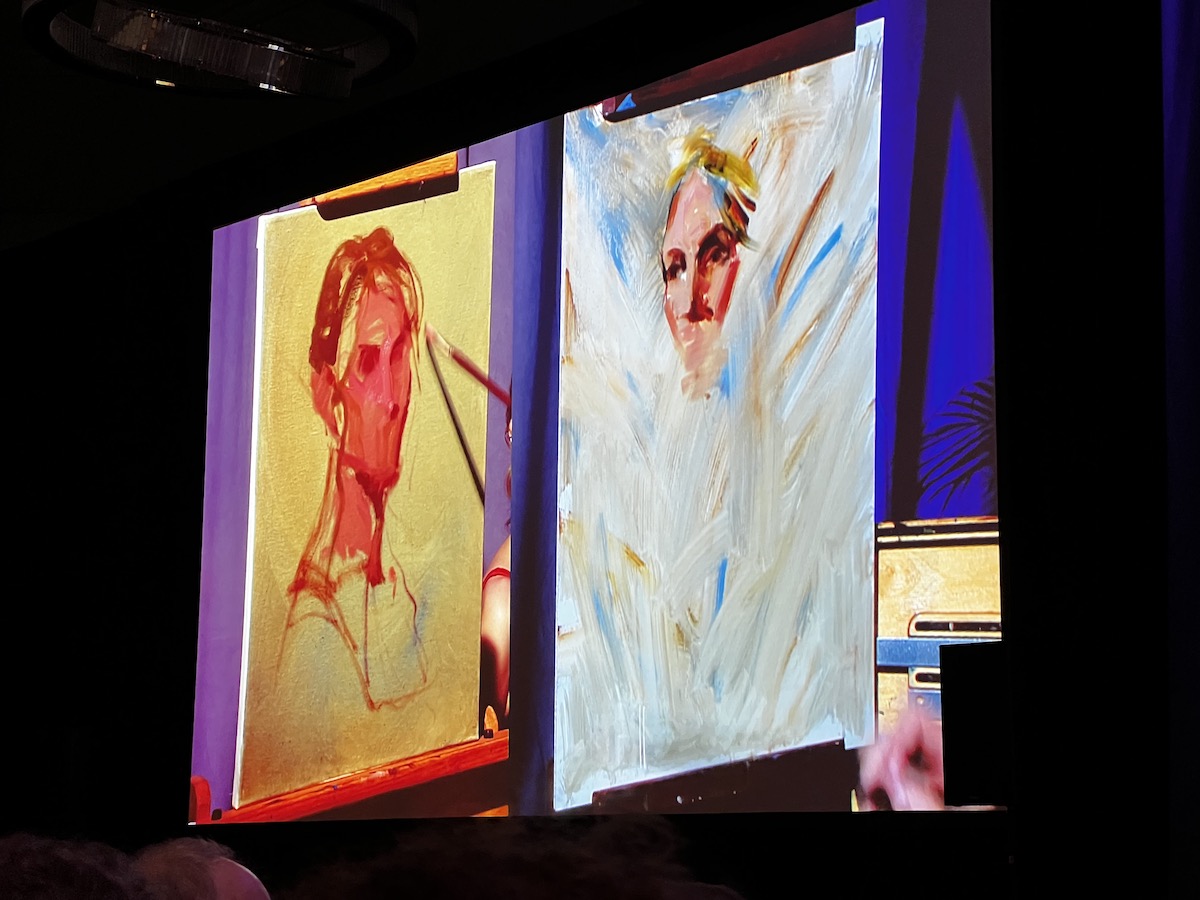 Michael Shane Neal and Michelle Dunaway have some points in common: both have become the spokesmen of their mentors, respectively Everett Raymond Kinsler, of whom Shane Neal was the protégé, and Richard Schmidt, pioneer of Alla Prima painting.

In a society increasingly at a loss, it’s nice to hear Michael Shane Neal refer to Kinsler as “Mister Kinsler” because it’s symptomatic of the relationship of devotion that binds, even today, the pupil to the master.

The two artists demonstrated how the importance of the edges in the composition, -soft and hard/lost and found- play a crucial role in the realization of the compositional atmosphere. The artists approached portraiture in a completely different way: Michael Shane Neal began his work with the creation of large shapes, while Michelle Dunaway began by defining the details of the face from the inside out. A comparison that highlighted the conceptual richness of the Portrait Society of America conference, in which equally important artists approached art in a completely different way, without transgressing the basic concepts of art – the importance of drawing and values – which are fundamental to create a solid and realistic composition. 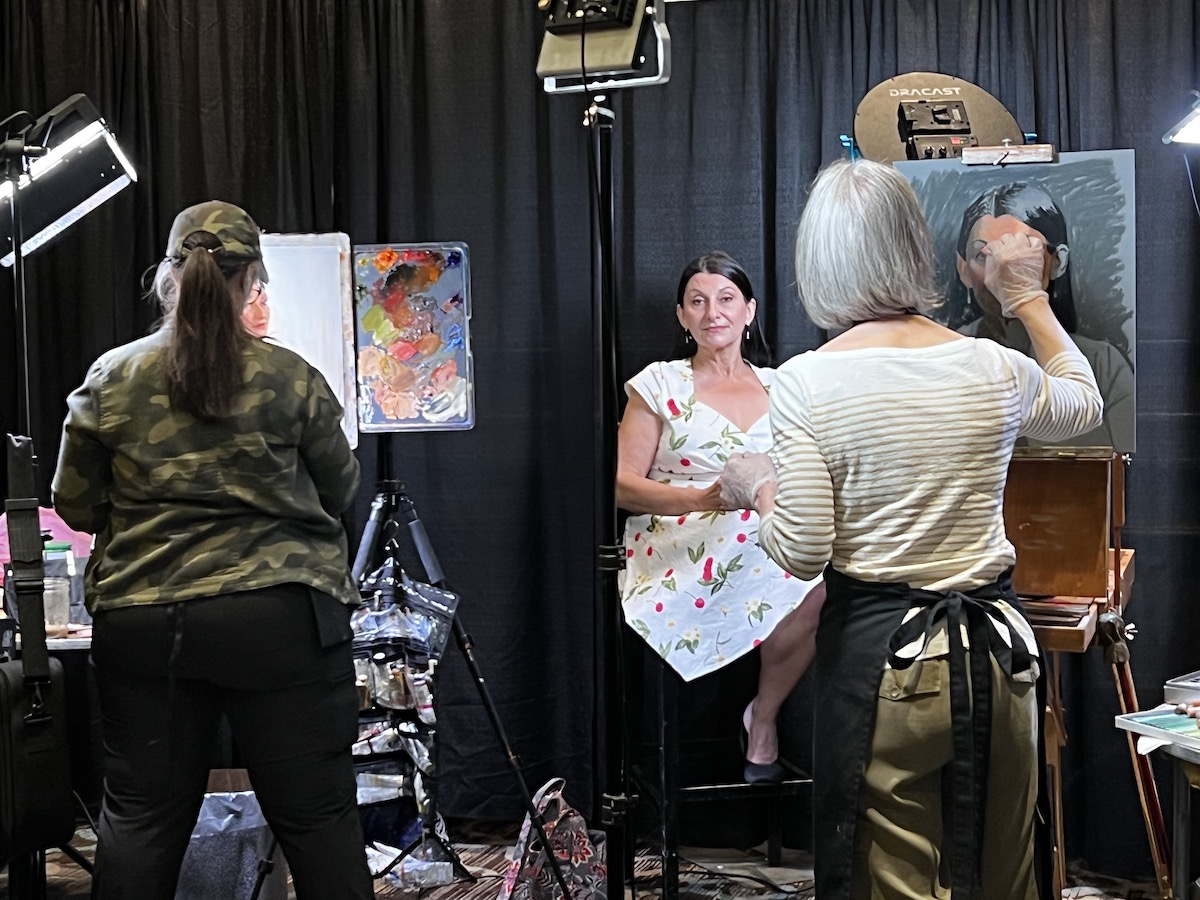 On the left, Tina Garrett and Wende Caporale during their demoThe break between the morning and afternoon demonstration sessions allowed participants to admire Tina Garrett and Wende Caporale’s “work in progress”. Throughout the day, in the exhibition room, they created a life-like portrait of the same model with two different “sensibilities” and mediums: oil and pastel.

The afternoon and evening sessions were organized in such a way as to allow participants to choose which topic to explore in depth thanks to specific demonstration sessions held in parallel, which also included a practical drawing session. During the drawing sessions, generically named: “Strengthening Drawing Skills”, and active every day of the conference, there were artists who offered their expertise and practical advice during the course of the work. The afternoon group included, in rotation: Gregory Mortenson, Ron Hicks and Elizabeth Zanzinger; while the evening group included: Kevin Chambers, Joseph Daily, Richard Christian Nelson and Ann Moeller Steverson.

Among the other workshops, Jeff Hein and Mary Qian demonstrated how in the Unity of Color Harmony and Form it is necessary to establish the general tonal values of the forms, then refined in a completely subjective way: more energetic and vigorous for Qian and more rational and moderate for Hein. “Everything in composition is relative to the personal scale of priority,” said Jeff Hein referring, in his case, to light.

The natural predisposition of Seth Haverkamp -decisively pro-positive- has made this artist a real character: he is pleasant to listen to and has a disarming sincerity in giving technical information. In the afternoon demo, entitled Exploring the Process, Haverkamp reiterated that it is necessary to consider forms as simple lines, without being intimidated by parasitic preconceptions that the brain instills on the basis of knowledge. Haverkamp, in proceeding with the composition, made only one element at a time, which, once he studied the factors of light and shadow, he harmonized in relation to the rest of the composition. Haverkamp paid particular attention to the creation of the background, on which he had previously and as usual applied a layer of Liquin – a semi-gloss medium that speeds up drying, improves flow and reduces the retention of brushstrokes in oil colors – which allowed him to avoid the use of other mediums in the application of color.

In our age, and especially after the long pandemic period, the need to communicate through digital has been felt more than ever. This is the reason that prompted Anna Rose Bain, Mardie Rees, Adrienne Stein and Ann Moeller Steverson to discuss an explanatory session entitled: “Presenting Your Work in the Digital Age”. Based on personal experience and with numerical data in hand – which, in the case of Stevreson, count about 17 million followers on TikTok – the speakers dispensed useful advice and food for thought on how to move on social media, which paths to take and what is absolutely necessary to avoid.

In the evening meeting, the precocious Suchitra Bhosle and the ecclectic Kerry Dunn focused the audience’s attention on “Interpreting the Beauty of The Body”. The two artists have completely different backgrounds and artistic visions, which is evident just by looking at the surface of the canvas: titanium white for Bhosle and pea green for Dunn. Bhosle, of Indian descent, was a gold medal winner in a UNESCO-sponsored world art competition at the age of nine; Kerry Dunn studied at Studio Incamminati with Nelson Shanks where, to this day, he teaches. The realization of the female nude was very different for the artists: for Bhosle, who admitted she couldn’t remember the specific anatomical names of the body parts, it was a clear visual inspiration, a sort of Alla Prima painting: “I try to find my proportion first and then the rest comes by itself”, Suchitra Bhosle declared. Dunn, on the other hand, follows the method imparted by Charles Bargue at the academy and based on the block-in of large forms that he made in a totally abstract way. Kerry Dunn sought to establish the anatomical geography of the figure by stating that: “knowledge of human anatomy can help but does not save a drawing from error, which can be avoided by applying true systems of measurement, such as angles.”

The busy schedule of events marked the day with the 24th anniversary celebration of  The Art of The Portrait, with the meeting of the finalists of the Portrait Competition. At the end of which, the public participated in the much-anticipated “6 x 9: Limited Size, Unlimited Talent – A Mystery Art Sale”, collecting extraordinary works of art offered by the artists to support the Portrait Society of America. Afterwards, through a silent auction, attendees also had the opportunity to purchase the works created by the eighteen artists during yesterday afternoon’s FACE-OFF. Both the Mystery Art Sale and the silent auction are an extraordinary way for participants to take home not only a souvenir that marks the steps of this event, now in its 24th edition, but also a valuable work of art created by some of the most important artists on the American and international art scene.

The day has come to an end and Miami Niche is waiting for you tomorrow, as usual numerous, to discover the behind the scenes of The Art of The Portrait. Follow us.

(On the title, Michael Shane Neal and Michelle Dunaway at the end of the demo, The Lost and Found Edge of Reality)