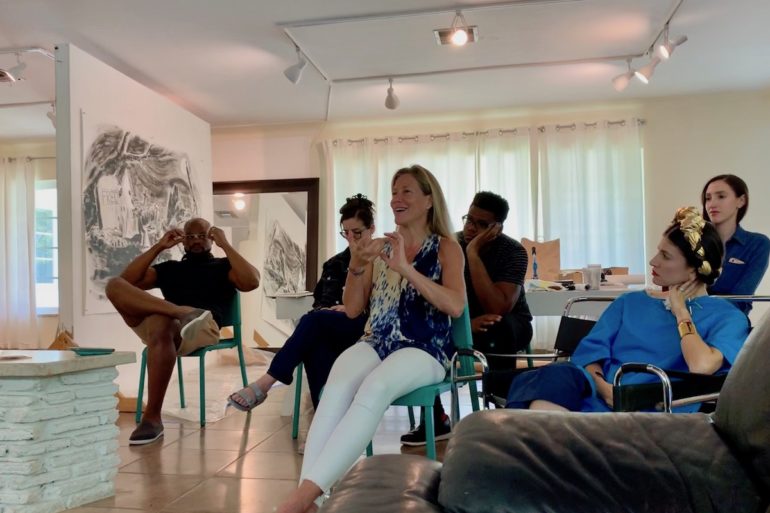 Didier William, originally from Port au Prince, Haiti earned his BFA in painting at the Maryland Institute College of Art in 2007 and his MFA in painting and engraving at the Yale University School of Art in 2009. His sophisticated and elaborate way of expressing himself reveals his professions as a teacher as well as an artist. Winner of numerous awards and prizes, William’s art on wood is caged in a very accurate steel structure that guarantees its stability.

The initial works in which he was inspired by the search for gender sexuality, were followed by self-portraits that led him to recompose figurative art. His current body of work, with titles in Creole, his native language, involves the production of preparatory sketches made with ink and water on Mylar (a particular polyester film, designed by Du Pont and used to make the sails of boats). It is only after the realization and evaluation of the sketches that William decides what to transform concretely into a work of art. His current body of work is composed of works in carved wood, mixed media and collages dealing with different themes: personal experiences (memories that refer to the grandmother’s clothes), historical events (the machetes that symbolically represent the African diaspora and racial violence) and iconography.

His works offer a sense of total drama and are characterized by the presence of many eyes that cover the entire area of the body and have a double meaning: they watch over with their silent presence and cover, like a second protective skin, the body mentioned in its materiality of its shadow presence.

Didier William and Mark Thomas Gibson have lived part of their childhood in Miami, and recognize that the city has changed extraordinarily.

Being multitasking is one of the peculiarities of Mark Thomas Gibson, also with a teaching background, he works unceasingly while conversing simultaneously with four people. He gained his BFA at The Cooper Union and his MFA at the Yale School of Art in 2013.

Gibson found the comic books literature, the most effective medium for doing social justice and communicate with people. At twenty he took part in a protest, after the killing of a black boy by the police. This experience has changed his life and his way of conceiving art and as a result of which he has composed his first book “Some Monsters Loom Large” (2016), followed by the “Early Retirement” (2017). The protagonist of both books is Mr. Wolfson, a werewolf that identifies himself in first book, with the author, projected as a child who grows up, among people who do not smile and no longer talk to him. Retracing the history of colonization, in the second book (done on the occasion of the 2016 presidential elections) he questions the lack of utopias by the human race. The composition of his works is a play of black and white, made in pen, while the reworking of some of his works composes the colored drawings.

Gibson’s focus is to draw attention to the black experience of American culture and history for which he decided to found The Negro Rifle Association (with an identifying flag, which he created based on the idea born in 2017), in order to celebrate the strong and vital energy of men and women of color, often mistakenly associated with exclusively regrettable facts. Gibson officially steps in at Yale University, in favor of this cultural exchange (against the advice of friends), to better understanding of its mechanism.

Path Phillips, unlike his roommates, has a past as a street artist for the busy areas of Louisiana, where, thanks to his brother, who later became a prison guard like his father at the Louisiana State Penitentiary, managed to fit into clandestine street environments. The Louisiana prison, known in the jargon with the nickname of Angola, has a strong symbolic value for Phillips who often refers to it in his works. But while on one hand Angola represents a source of inspiration, on the other hand Phillips lives with conflict regarding the production of objects of use and the foods cultivated by the prisoners and then sold for a few coins to the community, as a form of self-sustenance.

Despite having dropped out of studies at the University of Memphis due to lack of funds, his talent led him to be part of the renowned Skowhegan School of Painting & Sculpture in Maine. His work addresses cultural and subcultural issues, ​​race, landscapes and the concept of America. Themes that he re-elaborates through a black narrative celebrated by suburban graffiti artist. His goal is not to equate his experience with the rigid rigor of the subject he is dealing with, but instead to use a common language to examine the perception of society, through seemingly trivial arguments and satirical themes. In his works frequently appear the image of the train (first medium used by clandestine graffiti artists) and cabbage, among the most cultivated vegetables of Louisiana.

During his residency at the Fountainhead, ending at the end of July, in addition to experimenting with its production on paper, he is maturing an artistic process more detached from the world of Street Art, but still full of personal symbolic meanings.

And finally, Coady Brown. Clear ideas and little philosophy, she knows how to express with enchanting grace and beauty in her works, very colorful and rich in textures. Her past is common to many young people: night’s experimentation with alcohol as an escape route, and multiple love affairs. These are some of the themes on which her works are loaded, immediate and rich in color like her grandmother’s wardrobe, which she scrutinized as a child. The painted bodies are rigorously oversized: firstly her being uncomfortable with the concept of sensual femininity (Coady Brown defines herself as both a woman and a queer), secondly the need to cover herself from the harsh winters of Philadelphia, and the third reason is the need to inhibit any malicious eyes, addressing a theme familiar to the female world. Unusual perspectives, giant hands and bodies that burst onto the canvas in atmospheres in which the theatricality of her experience as a dancer becomes smaller in the intimacy of her personal environment, in which the proportions of the human figure dominate the surrounding environment.

Coady Brown obtained her BFA in 2012 at the Tyler School of Art, Temple University, of Philadelphia in drawing and painting and her MFA at Yale University in New Haven, in painting and engraving. After graduating, she moved to Los Angeles with a group of friends: an experience that she defined disorienting yet uplifting: “Los Angeles is a great playground”. In 2017 she joined the Skowhegan School of Painting & Sculpture, where she met her companion Path Phillips.

Her initial idea of ​​making abstract art has been well channeled into her style, which offers an immediate image with the possibility of searching for deeper meanings, which go far beyond the obviousness of the scene. The textures are extraordinarily rendered through the plaster that extends in an almost obsessive way until it becomes velvety in the color rendering. At Fountainhead she experimented painting on paper.

Experimentation, study, sharing and communication: these are the elements that make the Fountainhead Residency a great opportunity for growth.


EN-Michele del Campo is an Italian artist from San

EN- Two Girls as Saint Agnes and Saint Dorothy by

EN-A jump into the world of Street Art. If Banksy

EN-She is Mardie Rees, a very talented sculptor an

EN-Falling Up 2 by Daniel Bilmes. Oil on Panel. 20