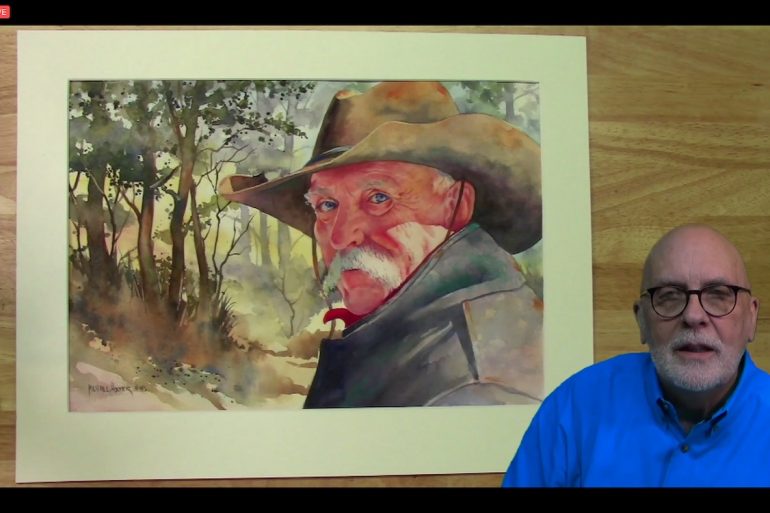 Big surprise today for the staff and audience of Watercolor Live who received a surprise visit from Eric Rhoads, currently “under the weather” but who couldn’t resist the event.

It’s the finesse of the details that help tell the story of who the person we’re portraying is, and sometimes you have to use your imagination,” said artist Michael Holter, who opened the second day of Watercolor LIve. Holter created a portrait, live, of an old Fort Worth cowboy. The artist, during his demo argued that it is completely unlikely to find two watercolor works the same. Impossibility due to the fact that watercolor is a very expressive medium and consequently also very personal.

In choosing the image, the artist has, in fact, performed a dual demonstration: of portraiture (with the image of the cowboy on the right) and landscape (with the landscape represented on the left of the background). The artist completed the work over the course of the entire day, logging on from time to time to describe the progress made. This approach, already tested with Realism Live, was much appreciated by the public.

“Transparent watercolor is great because you can see through the layers” said the artist, who has a “religious” respect for the use of shadows.

For Holter, watercolor is an extraordinary medium capable of rendering innumerable gradations as few other mediums can. In the realization of the preparatory drawing, he did not punctuate the details much, delegating the freedom of expression to the color. The watercolor work began with washes that helped him both to cover the whiteness of the paper-which always turns out to be misleading in determining value tones-and to achieve a general tone while leaving the bright areas of the face clear.

Artist Amit Kapoor, Mijello Mission Gold Watercolor ambassador, started off by emphasizing the importance of drawing, who said he feels most comfortable depicting a landscape in plein air. “Painting is a challenge, so accept the challenge, said the artist, who claims to capture no more than 70-80% of the landscape he sees, in his compositions. “It is not necessary to use a lot of colors and instead it is important to learn how to work with a family of colors,” says Kapoor, who uses a lot of lavender, ultramarine blue and cobalt green to maintain chromatic harmony. In the brush realization, the artist moved very quickly, proceeding with a lighter scale from right to left, in order to respect the natural lighting of the composition. “The formula is all about playing with light and shadow,” said the artist, who playing with the value scale on the shadows brought out small pop up details. ”It’s very symphonic to look at,” one participant said of him.

Kathleen Giles is an award-winning artist and teacher who has been painting in watercolor for nearly thirty years and working with both hands simultaneously. While virtuosic in every artistic genre, she has created a floral demonstration using the wet-on-wet technique that can be applied with all mediums.

She started with the washes and to control the amount of water on the brush she used a blotter, similar to the one made yesterday by Joe Miller. In painting Giles started with covering the complicated background taking care not to wet the central flower. When the composition was almost completely dry she finished the pistil – previously covered with the mask – and the thousands of shades of the details. “Kathleen, I love how you approach your flowers. I love doing flowers so your demo is exactly what I need,” says an enthusiastic participant.

The complete realization of the painting took five and a half hours, and it was only at the end of the composition that she abandoned the photographic reference to adjust the color contrasts over which the artist finally sprayed water spray.

Architectural illustrator Steward White transformed a disused building into a dramatic landscape sculpture. The dramatic sky made the composition  more fascinating and theatrical. White approached painting by making a quick plein air sketch on a large scale. It was admirable to see, how the artist adapts to the weather and the unpredictability of nature that he translates into a mark on the paper. In the sketches he captured the lights and positions of the elements that he thought were interesting for the narrative. “In the scene I want to highlight that it is not so critical to be true to nature. It is important to take what is offered and make something out of it.”, stated the artist. For the outdoor sketch, he helped himself to a large board from Judson Outfitters. “It’s great for laying out large paper,” White said.

In the sketch he captured the natural elements as if they were an abstract composition. He began by representing the large shapes and then realized the shadows and reflected lights, making the elements of the composition the great actors of the scene. Once the sketch was finished White finished the work in the studio, refining the details. For plein air enthusiasts, Steward White will be in France, in September, for a workshop in collaboration with Workshop France, sponsor of Watercolor Live. For information please visit the following link: https://workshopsinfrance.com/stewart-white-watercolor-workshop/?et_fb=1&PageSpeed=off

The critique session is always a sore point for artists. At the same time, however, critique facilitates the learning and problem-solving process. For Watercolor Live this important session was entrusted to the expert eye of John Salminen, winner of important awards and a character with a particular sense of humor.

Analyzing some of the works submitted by the participants, Salminen highlighted the mostly common problems regarding: chromatic and tonal values, perspective, the different interpretation of a photographic image with respect to nature and the balance of the composition.”We learned so much by looking at the analysis of other artists’ work,” S.W. , an attendee stated.

The magic with which Chien Chung-Wei crafted his watercolor captivated the entire audience. He did it spontaneously, quickly and without hesitation. The same way he makes strong and precise brushstrokes, “like Bruce Lee’s moves,” said the artist smiling. Chien Chung-Wei is the first Taiwanese artist to be inducted into the Signature Member and Dolphin Fellow of the American Watercolor Society.

The artist doesn’t remember exactly when he started painting using the Japanese calligraphy technique he learned when he was still a child. What is certain is that his spontaneous way of approaching watercolor made the demonstration an exciting show. “My ability in watercolor is an ambition for pending art,” says the artist who makes the different areas of the painting talk to each other as if they were characters on a stage. Fundamental in the approach to the technique is to make a drawing – very quick and not very refined – in which he captures the salient features to be remembered, the strangest and most ambiguous ones. Having focused on the subject of the composition, attention is concentrated on the shadows.

Chung-Wei began with the elaboration of light shadows and then proceeded to semitones and darker values. During the performance, the audience witnessed singular artistic practices, such as: the quick and precise brushstroke followed by three strokes and the plasticity with which he exploited all surfaces of the brush, at 365 degrees.

“Less is more” is the motto Chung-Wei repeated continuously during the demo and keeping the hand pressure light and steady. Exciting were also the stroke edges made by the artist with a small cloth that he also uses to balance the tonal value of the composition.

Among the day’s sponsors was Jeff Olson, Director of Art Education for Royal Talens North America, In addition to being a representative of Royal Talens, a Dutch company founded in 1899, Olson is also an artist with thirty years of experience behind him.

In today’s demonstration, he made an interesting historical and technical appearance on watercolor and gouache, proving that there is always something to learn even from the composition of materials. “The pigments of watercolor and gouache are the same, it is the density of pigmentation that differentiates them, higher in gouache than in watercolor,” said Jeff Olson. The intensity of pigment saturation is also key to distinguishing quality materials from the rest, as. demonstrated in the afternoon demo by Dena Peterson who used Van Gogh Watercolors.

Another of the platinum members, sponsors of Watercolor Live, is LPAPA, Laguna Plein Air Painters Association.

LPAPA is an association founded 1996 with the mission of preserving the history of California’s 19th century plein air movement. Its mission is to build and promote the renowned landscape painting heritage of Laguna Beach, CA.

As LPAPA Signature Member Daniel Marshall also demonstrated yesterday, the association is able to enhance the visibility and livelihood of its members through the prestigious Plein Air Invitational and many other opportunities, made up of programs, exhibitions and galleries, throughout the year. LPAPA is a community of artists with members coming from all over America and this is a more than valid reason to join and be part of this prestigious association. You can do so at the link: https://lpapa.org/join/