“Tokens of Memory: The Miniature Portrait Project” by Danco Robert Duportai Garcia in collaboration with the Conde Contemporary. 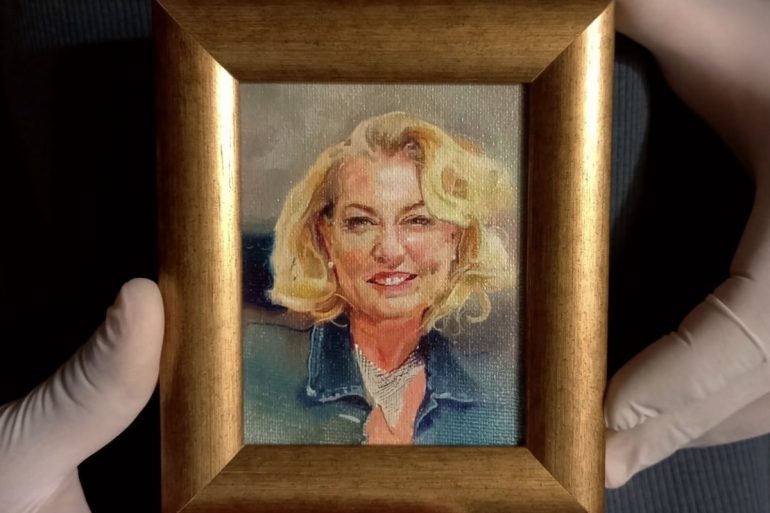 Stacy Conde, owner of Conde Contemporary in Natchez, MS, and the young Cuban artist Danco Robert Duportai Garcia, are working together since September 2021 on the project “Tokens of Memory: The Miniature Portrait Project.”

The project will last three years and will culminate in the exhibition of all the portraits made by the artist in this span of time. Duportai and Stacy Conde got to know each other thru social media and Stacy Conde literally fell in love with the work of Duportai.

His passion for miniatures derives from memories related to his childhood memories and to his father, an airplane pilot, who used to bring with him, while traveling around the world, small pictures of his loved ones: a way to always keep them close. He also used to keep a book of small snapshots taken in the places he visited.

This is one of the factors that had an essential impact on the mental and experimental dynamics of Duportai who became passionate about art – consciously – at the age of ten. The artist associates miniatures with the theme of memory, about which he states: “For me, miniature is like a snapshot, the simile of the memory,” says the artist who experimented this ancient technique out of pure curiosity.

Drawing, and then painting, have been his companions, he interacted with them every day. He said about that: “I paint every day, and if I don’t paint, I think of painting. It’s a vice and a ritual.”

After his art studies, he graduated from the prestigious Academia de Bellas Artes San Alejandro in Havana, Cuba, and he taught there as well. The Academia is a Cuban institution renowned for the level of excellence reached by its graduated artists.

The disadvantaged situation, both from the social and artistic point of view, in which the people of Cuba are forced to live has recently push him to move to Mexico.

In his house, bond to the essential, the Polaroids hanging on the walls immediately catch the eye. They are small images made by the artist during his travels or when his attention was captured by a detail that he decided to narrate later in his tiny works.

The small snapshots he takes, as well as the small paintings he creates, are the essence of his art.

The ancient art of miniatures consists in painting down proportioned subjects down to the smallest detail, with scrupulous refinement. In the past, miniatures were represented on cameos, watches, medals and daguerreotypes that only the wealthy classes could afford. Furthermore, according to a study conducted by the famous auction house Christie’s, miniature portraits appear in European royal courts as early as the 16th century and became famous during the reign of Queen Elizabeth I. The artists made these small portraits for soldiers and sailors who they could both carry the image of their loved ones with them and leave them with an image of themselves.

Thinking about the antiquity of this form of art – which in the West had its maximum expression during the Middle Ages – compared to the contemporaneity of the work of Duportai Garcia, is fascinating and anachronistic at the same time.

The enthusiasm that this young artist put in making the miniatures,an almost forgotten form of art, it’s extraordinary .

“My aim is to bring this artistic genre to people’s attention in an innovative way,” declares the artist. His is a sort of mission combined with the ability to capture and render, in very small portraits, all the personality and essence of the subject represented. To do this, he focuses on two details of the face: the eyes and the dividing line that divides the upper lip from the lower one. He considers fundamental these elements to capture the spirit of the subject depicted. 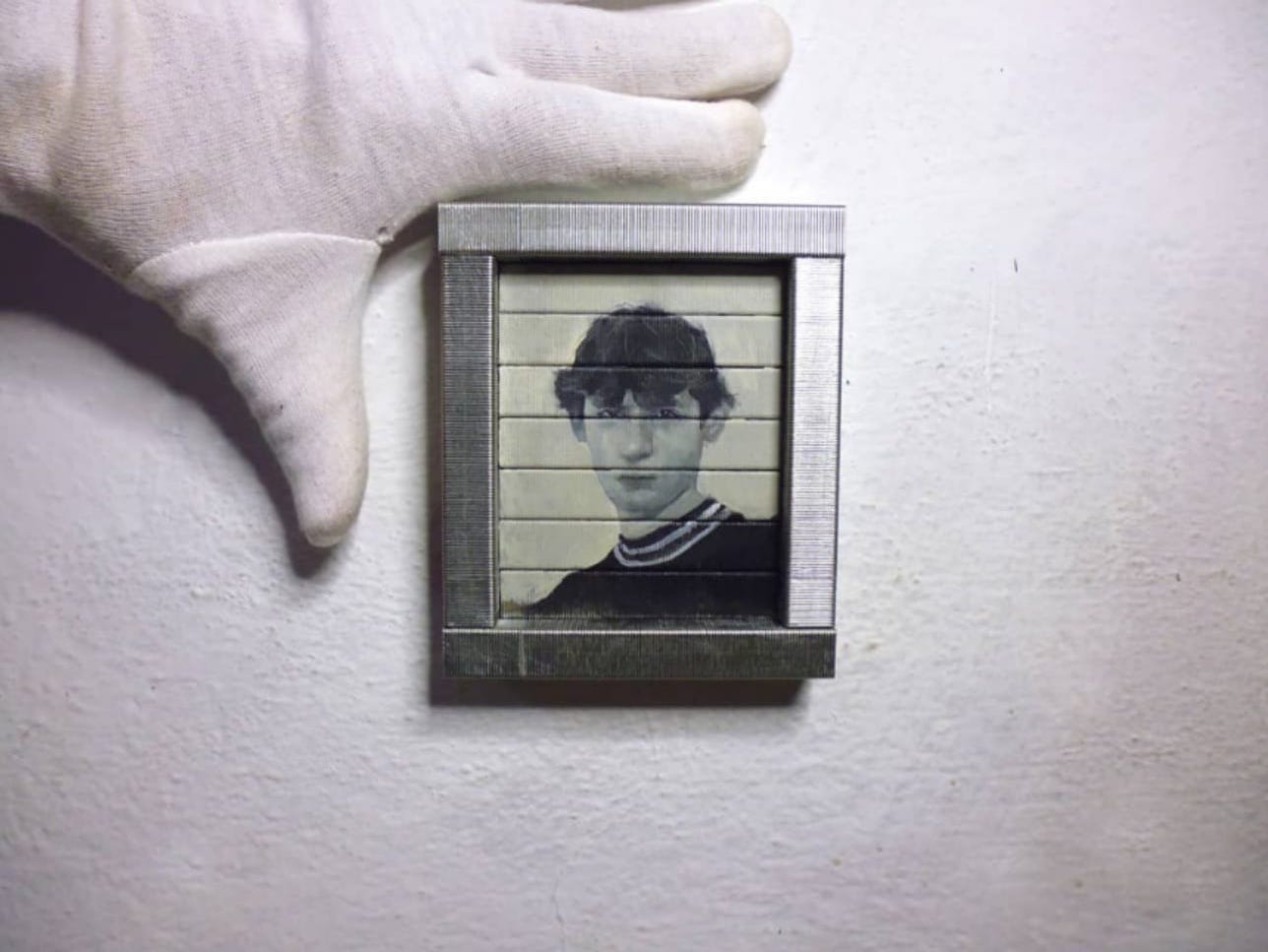 One work of the Miniature Staples Project by Danco Robert Duportei GarciaThe artist declares that he has always preferred to work on tiny dimensions – he creates portraits on supports of 1 x 2 cm – uses brushes so small that sometimes those on the market do not meet his needs and is forced to buy used brushes or to cut the bristles with scissors to be allowed to work with only two of them.

Duportai Garcia is not new to the representation of miniatures and has made several projects around the world. The ‘Tartamudeando’ project brought the miniature portraits on staples to Beirut. The staples, in fact, given their fragility, lend themselves well to representing the instantaneous fragility of a memory.

In addition to the project with Conde Contemporary, Duportai Garcia exhibited in New York, Los Angeles and Naples – at the Pan museum, Palazzo delle Arti Napoli. He is also planning an exhibition in which the portraits will be represented on cassette tapes from the 1980s and 1990s.

Duportai Garcia, was also a teacher at the Academia de Bellas Artes San Alejandro in Havana and he declares himself a full-time portrait painter, although he creates works representing body parts. The idea of ​​representing miniatures also constitutes a challenge for him. He states: “I found people who supported me in making the miniatures – such as Stacy Conde – and people who snubbed me, considering this form of art outdated and boring. I want to revolutionize the art of miniature in a fresh and contemporary way. ”

He usually prefers the watercolor technique, used to paint the two-meter portraits he realized in the past, but the miniatures are made in oil on linen. The process begins with taking charge of the images sent to the artist who prefers the ones spontaneous and natural and not recreated in a photographic studio. Then the drawing on canvas, that Duportai Garcia creates with extreme spontaneity, given his refinement and knowledge of the human face. He finds the compromise between the face and the background. Contrary to what one might imagine, Duportai makes the miniatures without making use of a magnifying glass but relying exclusively on the ability that his eye has in capturing the details.

It is very interesting to understand the process behind the actual realization. Duportai explains it to us by making a simile. Is an afterimage exercise of the optical illusion. The exercise is to observe an image for 10-15 seconds, then moving your gaze to see it briefly elsewhere. The actual creative process starts from here.

When the portraits are finished Duportai frames each work, part of the “Tokens of Memory: The Miniature Portrait Project”, with a golden frame, reference to both the historicity of the artistic technique and the philologic reference to the past.

Each miniature portrait made by Duportai Garcia is a precious gem measuring just 8 x 10 cm (3.15 x 3.9 “). The cost for its realization is $ 700, of which $ 350 to be paid at the time of the commission and the remaining $ 350 at the end of the final exhibition. For more information on the project and how you can participate by commissioning a portrait, you are invited to follow the project  @miniatureportraitproject, both on Instagram and on Facebook, or contact the gallery directly at the email address: info@condecontemporary.com.

Rest assured that the enthusiasm of this young artist will surprise you like the magic of his miniature portraits in which you can fix the moment of a memory.

(on the title: One of the finish works of Tokens of Memory: The Miniature Portrait Project)