The Fort Lauderdale Boat Show marks its 60th anniversary by unveiling the new Superyacht Village wing, from October 30 to November 3, 2019. 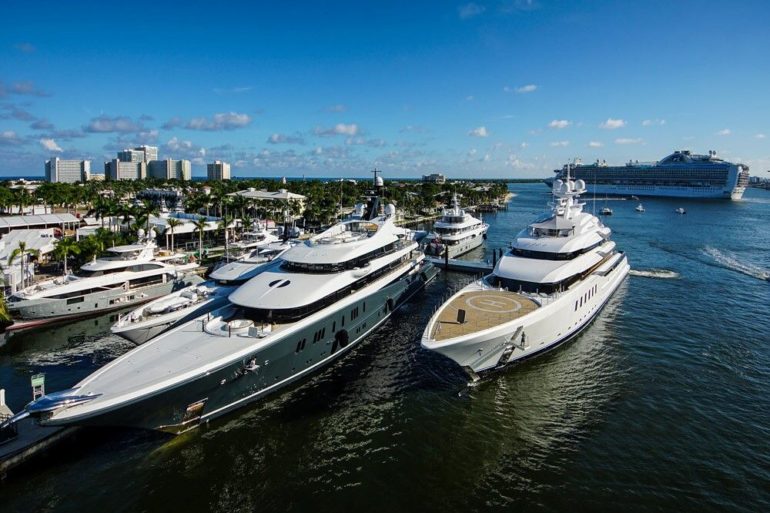 The FLIBS 2019 edition started in the best possible way: in celebration of its 60th anniversary, the ribbon was cut, which, as in accordance with maritime tradition, was composed of colored flags. In addition to Phil Purcell – CEO/President of the Marine Industries Association of South Florida (MIASF)-, Fort Lauderdale Mayor Dean Trantalis and Bahamas Consul Linda Mackey, among the guests who performed at the inauguration of the 2019 edition, was the band Bahamian Junkanoo, with a social message aimed at promoting tourism in the Bahamas, despite the violent impact of Hurricane Dorian, in fact, most of the Bahamas are already ready to welcome the boaters.

The opening ceremony was held in the brand new Superyacht Village, making its debut at FLIBS, which is confirmed as the world’s largest water show. This year’s event will feature more than 1,200 exhibitors with more than 1,500 vessels on display (worth a total of USD 4 billion, with an annual state economic impact of USD 857 million, attracting 110,000 visitors from 52 countries). Not bad when you consider the fact that the FLIBS, now owned by the Marine Industries Association of South Florida (MIASF) and manufactured by Informa Market, was originally born by local manufacturers and retailers looking for a way to sell boats. It was the year 1959, long before the internet arrived,  before they invented cable television or even before Neil Armstrong set foot on the Moon.

“It would have been hard to imagine that FLIBS would become the cultural and commercial icon it is today. The event, at the time, made its entrance with 13 boats, in what was the new Lauderdale Navy, but was so successful that it turned from an “informal exhibition” – free to the public and led by volunteers – to the ambitious and grandiose boat show that it is today.” Andrew Doole, president of U.S. Boat Shows for Informa Market, also pointed out: “The increasing number of large yachts exhibiting at the fair continues to attract wealthy buyers and customers of superyacht charters, hence the reason why the organization is bringing one of the most important innovations this year: the introduction of the prestigious Superyacht Village that is an addition to the six exhibition areas currently present at FLIBS. The Superyacht Village is the new area – located at the Pier 66-Six Hotel and Marina’s new “Pier South” property – which is home to extraordinary boats spaced more than 400 feet in length, as well as yacht toys including helicopters (Airbus), submarines Ferrari, Maserati, and Range Rover, which featured an Overfinch Velocity model (starting at $ 315,000) for the first time exhibited to the public and with a very limited production of 10 units worldwide.

Among this year’s nautical innovations at FLIBS are: the Super Sport 65 made by the Italian Rossinavi, in collaboration with Pininfarina, one of the most representative figures of Italian design; the highly anticipated world debut of the 311-foot Madsummer of Larssen and the American debut of the 180-foot Heesen Yacht Vida as well as the entry on the American market of the Dubai-based Majesty Yachts brand, Dubai’s only superyacht builder, making its debut at the FLIBS with Majesty 140 and Majesty 100.

In addition to dream boats and toys for enthusiasts, the FLIBS offers the now inevitable Sunset Soiree Yacht Chef Competition, that offers guests the opportunity to sample cuisine created eight-handed by four world-class yacht chefs, along with craft cocktails and tastings from suppliers in the luxury segment of the food industry. There is also no shortage of news at the Windward VIP Club, this year anchored in the heart of the FLIBS show -on face dock – and presented by Delta Private Jets and Ulysse Nardin, respectively the private airline and the official timekeeper of FLIBS.

Prepare your sailor’s hat: the show has just begun.