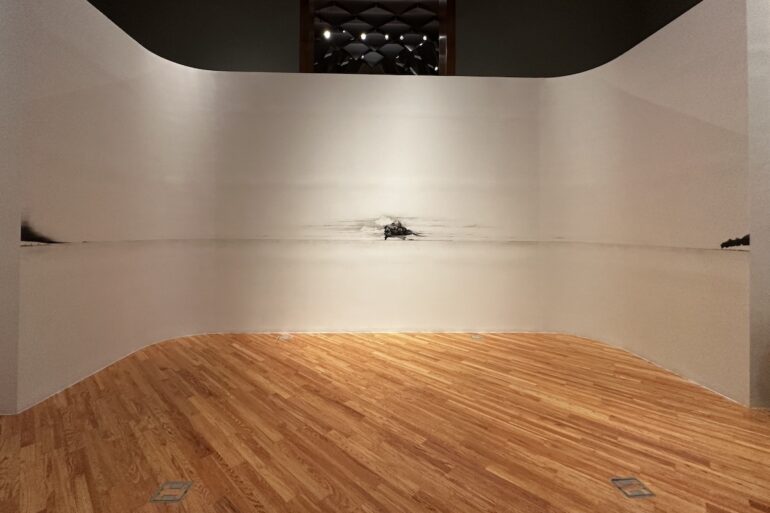 The “Breakfast in the Park,” organized as usual by the Patricia and Phillip Frost Art Museum – FIU is one of several events, organized punctually by museums and collectors, that officially mark the end of Miami Art Week.

On the first floor of the museum there is the exhibition by Peruvian-born artist Rafael Soldi, who made his debut in the exhibition halls of a museum with the show, “A Body In Transit.” In the exhibition, based on photographic works -mainly portraits of male subjects with their eyes closed that metaphorically represent the long reflection of identity- Soldi, addresses the themes of fragility, struggle and resilience that unite him, in his personal experience as a queer immigrant, with the experience of many other people in the balance with the concept of masculinity and personal identity.

In the exhibition “Rembrandt Reframed,” the 22 posthumous prints by Dutch artist Rembrandt van Rijn (1609-1699), on loan from the collection of the Georgia Museum of Art, are paired with the works of contemporary artists-Charles Humes, Jr., Jennifer Printz and Wanda Raimundi-Ortis-who shared approaches with the master while diverging, even dramatically, both in technique and in the concepts represented.

In addition to the paintings for which Rembrandt is considered among the outstanding Old Masters, the artist also made his mark in the field of etching, which he was able to push far beyond the boundaries achieved in his day, seeking -both in the etching needle and in the brushstroke-the tonal values, depth and texture of his works of art.

However, the prints presented in the exhibition were made by French dealer Pierre François Basan in 1786, who had purchased a collection of copper plates engraved by Rembrandt. The renowned quality of the engravings meant that production continued until 1808 with Basan’s son Henri Louis.

The exhibition relates particular themes, evinced by the artist’s etchings, to the works of contemporary artists-Charles Humes, Jr., Jennifer Printz and Wanda Raimundi-Ortis.

Rembrandt’s religious images, which predominantly depicted illustrative scenes from the Old and New Testaments of the Bible, are contrasted with images created by Miami-based artist Charles Humes, Jr.

The themes of Humes, Jr. an award-winning multidisciplinary artist and longtime teacher, focus on the relationship between religion and contemporary life, which are particularly influenced by the civil rights struggles of the 1970s and 1980s.

Artist Jennifer Printz, for the exhibition has created works that expand the possibilities of the medium by incorporating, as usual in her practice: drawing, etching and photography. Like Rembrandt -known for his attention to detail and intricate lines- Printz, in her abstract etchings, shares its technical rigor while expanding the traditional representation of historical etchings to reflect on the invisible structures of the universe.

Although he also represented studies of his mother and wife Saskia on the etchings, for Rembrandt the portraits were mostly projections of archetypal roles of individuals in period costume. Artist Wanda Raimundi-Ortis, who in her regular practice interweaves performance and portraiture by wearing sumptuous period clothing, interfaces with Rembrandt’s depiction of family faces by placing particular emphasis, unlike Rembrandt, on family portraits, which she makes mostly in charcoal and pastel.

However, the Patricia and Phillip Frost Art Museum’s flagship exhibition for Miami Art Week 2022 is “In the Mind’s Eye, Landscapes of Cuba.”

FIU -Florida International University, is home to the nation’s most important research center for Cuban and Cuban-American populations. Which is no coincidence, as most of the Cubans who came to American soil to escape the Castro regime came to Florida’s shores via the “Freedom Tower,” the place of refuge for Cubans fleeing the 1959 revolution. Because of its importance, the Freedom Tower was designated a “U.S. National Historic Landmark” in 2008.

Showcasing works by 19th-century, early 20th-century and contemporary artists, the exhibition invites the public to important conversations in terms of race, slavery, gender, colonialism and war. On the one hand the exhibition emphasizes Cuban history, on the other hand it reflects, the history that has linked the United States to Cuba, addressing the evolution and complexity of economic, political and social relations,that has united the two countries.

“In the Mind’s Eye, Landscapes of Cuba” offers a multi-layered reading of the relationship between Cuba and the United States in which, not only is the perception of events confronted alongside pastoral and serene images of Cuban race history, slavery and historical landscapes, but offers a broader interpretation of the theme rendered through the works of: Cuban artists who lived it, U.S. artists who -between reality and imagination- represented their vision of Cuba and second generation artists who represented Cuba based on the stories rendered by family members.

The exhibition was also made possible by contributions from Terra Foundation for American Art, the Darlene M. and Jorge M. Pérez. Foundation, and especially the Cernuda family, owners of the eponymous gallery specializing in artwork by Cuban artists.

Making a necessary preamble regarding the meaning of the term “landscape” which is used in the broadest meaning of the term, the interesting approach with which the exhibition was set up highlights the works of important American artists such as Winslow Homer, William James Glackens and Frederic Remington, who represented the island by highlighting its peculiarities in a manner consistent with their own style. Homer, in particular, focused his attention on Cuba’s identity, rendered through the repetitive representation of the characteristic royal palms (Cuba boasts the most complex biodiversity in the Caribbean on the island there are 100 different species of palms, 90 of which are indigenous) or through the detailed architectural representation of colonial houses in which the human figure takes a back seat.

Realist painter William J. Glackens, on a mission to the island to document the U.S. invasion for McClure magazine, made sketches with which he later painted the U.S. Army loading horses onto transport ships in Port Tampa.

Frederic Remington’s images of guerrilla warfare on horseback, on the other hand, refer to his experience in Cuba in 1898. As the son of an American Civil War veteran, he had grown up with battlefield tales and was eager to experience the challenges of war, so he decided to join the army, but his enthusiasm was short-lived as he was unaccustomed to either the physical rigors or the poverty of war and limited himself to illustrating events with the typical dramatic flair of American journalism.

The works of American artists are interfaced with those of the great Cuban masters, such as and August Chartrand and Aurelio Melero.

August Chartrand, is considered the most significant landscape painter of the 19th century. In his works, deep shades of green dominate his compositions, becoming picturesque and revealing depictions of the Cuban landscape and daily life.

Aurelio Melero, a prominent painter of the late 19th century in Cuba, was the director of the historic Academia Nacional de Belles Artes San Alejandro. Famous for still lfe and landscape works, Melero reveals all his strong reverence for the countryside through his use of a luminous palette, with which he exalts and honors the modest dwellings of the majestic Cuban countryside. His idyllic images reinforced the idea of a beautiful, strong and proud Cuba.

Finally, among the great contemporary artists emerges, first among all, the extraordinary Glaxis Novae, fine artist who also exhibited at Art Basel this year, represented by Castillo Gallery.

Glaxis Novae in his graphite rendering works constantly explores inequalities and the relationship between architecture and power. With his style, characterized by extremely small and detailed drawings made on large white surfaces, he depicts both specific buildings and disparate spaces in which he synthesizes hybrid or imaginary places.

In the pictorial-sculptural work in the exhibition, Glaxis Nova contrasted the modest form of the plinth with a piece of wall recovered from a site-specific drawing the artist made in 2015 for the Havana Biennial, as a synonym for the physical and economic decline of the city of Havana.

In the majestic work in the center of the room, on the other hand, Glaxis Novae draws the viewer’s attention to the political landscape and recent events that have shaken Cuba, about which the media have made absolutely no mention, demonstrating a lack of attention to the country’s issues. In August 2022, in fact, in Matanzas, lightning struck a fuel depot a that killed several people including firefighters who were using obsolete equipment. During the explosion a plume of toxic smoke engulfed Matanzas and traveled more than 60 miles to Havana causing a large-scale evacuation.

On display beyond Glaxis Novae are works by American artist Diana Fonseca Quiñones who, through layering fragments of paint from the facades of old buildings in Havana, emphasizes a glimpse of Havana’s urban landscape by transforming it into an abstract composition.

Instead, artist Lilian Garcia-Roig, investigates her family history and the history of botany in Cuba as the granddaughter of one of Cuba’s greatest botanical artists, who identified thousands of species of indigenous plants. Gracia-Riog reimagines the plant species identified in botanical illustrations by her relative and creates, at the end of the work, a timeline in which events such as Christopher Columbus’ arrival on the island are juxtaposed with personal and family events, including her return to the island in 1999.

In addition to the large-scale work created by Emillio Perez, “In My Garden” at the center of the exhibition “In the MInd’s Eye, Landscapes of Cuba,” the Frost Museum is exhibiting works that have been added to the permanent collection, including , “Only One Like You” by artist Kate Gilmore, and the mural created by the Tratos collective composed of artists Juan Travieso and Katerina Santos. Through the artistic form of the mural, which has flourished over time, especially in America, the duo wants to raise awareness among visitors to reflect about the plight of the panther, an endangered animal that is also the mascot of FlU, Florida International University.

(on the title, The Great Explosion, Matanzas, the majestic work by Glexis Novoa, 2022. Site-specific graphite wall drawing. Courtesy of the artist and David Castillo)