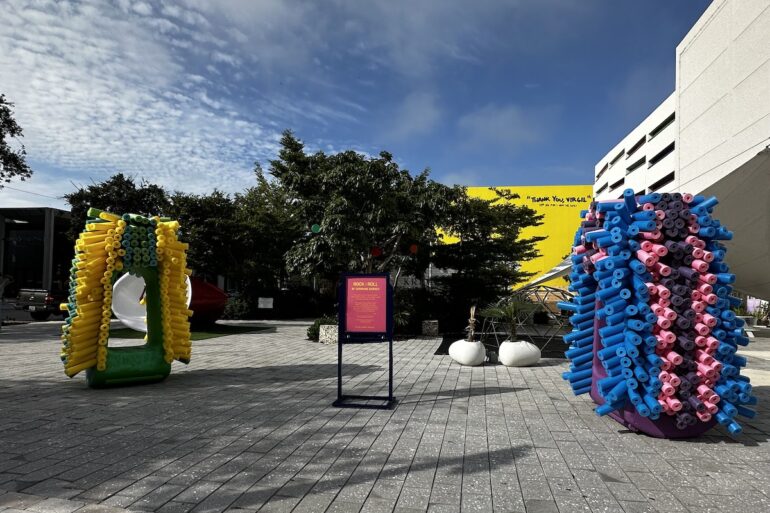 Germane Barnes, an architect, designer and university professor at UM -University of Miami’s School of Architecture, the recent recipient of the USA Fellowships and Rome Prize, 2022, has added another piece to his personal achievements. With the Rock | Roll project, Barnes won the annual competition set up by the Miami Design District’s Annual Neighborhood Commission by Anava Project. A highly competitive competition and one that is entered by invitation only, and that involves themed installation of a project. The winner of the competition is tasked with decorating the public spaces -the thoroughfares inclusive of palm trees and native trees, architecture and outdoor sculptures- in the Design District, beginning with the current year’s Miami Art Week and continuing through the following year. The curatorial brief for this year theme was, “Something to Talk About,” meaning the creation of design, site-specific interventions that could highlight Miami’s city-centric stories.

For his project, Germane Barnes remained faithful and consistent with the practice and design research that distinguishes all his work and investigates the link between architecture and identity. A familiar theme also presented for his master’s degree in architecture, at the Woodbury University.

Specifically, the project for the Design Disctrict is: ” a tribute to my adopted city,” said Barnes, who is originally from Chicago. Miami is the tropical paradise that welcomes millions of visitors and new residents each year and who come from all over the world to breathe the the good vibes that the city exudes, with its energy, vibrancy and a good dose of good cheer.

The credit for this is due, according to Barnes, to the many BIPOC-Black, Indigenous and People of Color- communities that the city is home to and that have played a key role since its early days in the city’s urban and cultural development, helping to make Miami the cultural range that it is now: a multicultural and multi-ethnic convergence of people living together under one roof, making it the city’s unique.

The prime example of the merriment that pervades the city is the Miami Carnival that Barnes was inspired by in the realization of the Rock | Roll project, and with which he literally dressed the Miami Design District in glittering colors reminiscent of carnival costumes. The Miami Carnival is a must-attend event consisting of four key events: the Junior Carnival, the Panorama, the J’ouvert and the Costume Parade + Concert and is scheduled for 2023, from September 30 to October 8.

To pay homage to Carabean folklore, Barnes has created giant rocking chairs, set up in various plazas around the district and covered with colorful foam noodles that harken back to the plumage with which the costumes are made. For the lush native trees and palm trees, which help make the Design District a piece of tropical paradise, Barnes has created a multiplicity of colored steel tambourines that descend, from the foreheads of the trees creating an interesting color play and referencing the vibrations of SOCA music, composed of a blend of African and East Indian rhythms.

In addition, in collaboration with Atlanta’s ALT BLD, Germane Barnes has created a large kaleidoscopic dome structure, resembling a disco ball, which serves as an attractive beacon dedicated to conference programming, developed in collaboration with the Center for Global Black Studies at the University of Miami and the Institute of Contemporary Art in Miami.

Miami Niche invites you to carve out some time to visit the Design District and breathe in the Caribbean folklore of Rock | Roll and try out the giant rocking chairs made by Germane Barnes, who through this project represents the first Miami artist to win the prestigious competition.

In addition, social lovers will not be able to miss the chance to immortalize themselves inside these colorful rocking chairs, which, precisely because of the intense enveloping colors, guarantee successful selfies.

(on the title, Rock|Roll by Germane Barnes)