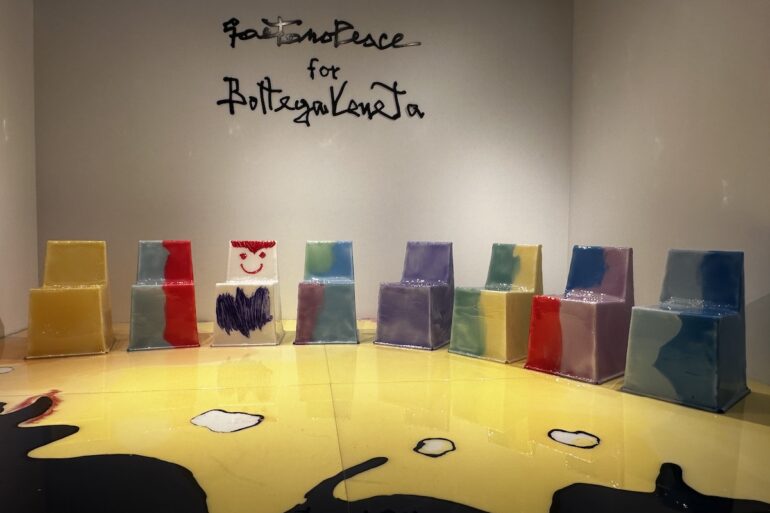 Design Miami/  is, in the wide range offered during Miami Art Week, one of the most exclusive fairs of the week, where glamour and elegance go hand in hand with the uniqueness of the pieces on display.

Set up as usual in Pride Park, in front of the Convention Center, where the XXth edition of Art Basel/Miami Beach also opened its doors-with access reserved for collectors until December 1, the 18th edition of Design Miami is curated by Maria Cristina Didero, who has set up the delicate plot of the fifty exhibitors, including galleries and Curio projects.

The theme proposed this year by the curator, was “The Golden Age: Looking to the Future”: an optimistic foreshadowing that follows the evolution of the recent edition held in Basel. “I chose to represent the Golden Age as a golden age rooted in the past but with ambition aimed at exploring a collective future that can shape a brighter future for human beings and our planet,” Didero said.

While being, all of the proposed projects, traceable to the Golden Age theme, each gallerist or exhibitor proposed his or her own analysis of the theme, put in dialogue with some current issues, such as: the concept of materiality as opposed to spirituality, the relationship between craftsmanship and traditions, the thin -and in some respects, still controversial- thread that demarcates the digital world from the physical world, and the concern for nature of which man is an integral part.

The latter, in particular was a theme particularly felt by Wexler Gallery, a historic gallery, which offered Aleksandra Pollner’s “Gleaning” collection, inspired by the artist’s morning walks immersed in nature during lockdown. The creative, collecting styrofoam scraps she encountered on her walk, brought to life pieces that fuse historical papier-mâché methods with newer ideas of circular design.

In fact, among the names celebrated by Design Miami/ are both the historical brands that have accompanied, or joined over the years, the previous editions of Design Miami/ and the interesting new entries that have made their debut in the world of the fair devoted to design.

Among the new entries is Galerie Negropontes in Paris: a unique address for aesthetes who are in search of exceptional designs and which aims at the ambition of reviving the tradition of French decorative arts with a contemporary vision of design.

Moderne Gallery in Philadelphia, is among the most renowned international galleries for vintage 20th century furniture and accessories, with a focus on vintage works of the American Studio Craft Movement. On display at Design Miami/ were: George Nakashima’s “Minguren II Coffee Table,” made of English oak burl, with its characteristic shape dictated by the organic irregularities of nature; and Jere Osgood’s “Custom Coffee Table” (1980), which is disc-shaped and appears to be suspended because of its spider-web legs.

The Southern Guild gallery in Cape Town exhibited furniture that references the “Inkundla” culture, and the conviviality of Nguni villagers, who gather in courtyards to celebrate life and nature. Also on display at the gallery is the work of Cape Town-based artist and ceramicist Zizipho Poswa, who has created a large-scale sculpture in which she expresses African femininity and the role that Xhosa women play in contemporary life.

As for historical brands among the icons celebrated at the 18th edition of Design Maimi/, the CONVERSO Gallery offered a series of 20th-century masterpieces, mostly customized, from the “Palm Springs Movement” typical of the 1960s. The exhibition features pieces that express the movement’s key ideas, which consist of liberation from the monochromatic and austere character of 1950s designs. Among the most prominent pieces are the two Brutalist-style cocktail tables with thick trapezoidal tops and the custom-made chairs featuring a high back and velvet upholstery by Jack Lenor Larsen, both by architect Arthur Elrod.

Galerie Patrick Seguin in Paris sought instead to highlight the talents of 20th-century French designers. Among the works on display, in addition to the iconic pieces by Jean Prouvé, also of interest are Pierre Jeanneret’s Library Table with Light, Jean Royère’s Tour Eiffel Coffee Table consisting of a glass top supported by brass and metal crossbars, and Pair of Advocate Chairs, two armchairs accompanied by the eponymous leather and teak sofa in the 1950s by Pierre Jeanneret & Le Corbusier

New York-based R & Company, presented acclaimed and onipresent artist Roberto Lugo, who will also be featured in a celebratory evening at the Wolfsonian-FIU Museum in Miami Beach on Friday, Dec. 2.

Known for ceramics for which the combination with portraits of political leaders and Hip Hop icons are a celebration of the communities of color to which he belongs, for R & Company, he transformed his well-known digital platform, “The Village Potter,” into a physical store.

Among the inspiring Curio projects on display, GUFRAM made its debut: the Italian radical design brand that presented a new edition of the iconic CACTUS® made in collaboration with the multi-hyphenate -artist, entrepreneur, actor and American music and fashion icon- A$AP Rocky and his design studio HOMMEMADE. The name of the work, produced in only nine pieces, featuring a specially designed green, is “Shroom CACTUS®,” and distinguishing it from previous dictions are a multitude of hand-painted mushrooms growing on the trunk and at its feet, defying the laws of nature. The cactus is the iconic symbol of GUFRAM, created in 1972 by Guido Drocco and Franco Mello, who celebrated their 50th anniversary this year during the Fuorisalone in Milan, with an exhibition at the Milan Triennale. The Curio/ space set up by Gufram in Design Miami/ resembles a thriving utopian forest, where Shroom CACTUS® is the undisputed star of the scene. Visitors are encouraged to walk on a grass-like carpet that covers the ground where dozens of ceramic flowers are scattered, under a blue sky adorned with fluffy clouds and giant mushrooms, depicted on the walls. “Working with a multidisciplinary artist like Rocky has been very inspiring for me. He knows Gufram’s brand and values very well, but more importantly, he is a great collector of our pieces,” said Charley Vezza, Global Creative Orchestrator at Gufram.

Also as part of the Curio program, New York’s Tuleste Factory presented an installation featuring the color blue and the infinity of sensations and emotions to which it can be traced, starting with the philosophical abstraction of color. The installation, which was awarded Best of Show, for Curio Presentation, invites the viewer to immerse themselves in the complexities of the color continuum, presenting a number of design pieces inside, including: Facture with Halo Wall Sculpture (2022), a large circular wall installation characterized by a soothing transition of hues; and Ian Alisatir Cochran’s Plump Side Table (2021), a blue resin table assembled in a way that plays on the effect resin produces when light refracts through solid parts.

New York’s Thomsen Gallery is back at Design Miami/ with a collection focused on Japanese ikebana bamboo baskets by the great masters of the pre- and postwar periods, contrasting with 20th- and 21st-century Japanese gold lacquer boxes and bronze and ceramic vessels from the medieval period. Also on display in the gallery is Sakuhin (2019): a fascinating four-panel folding screen made of antique paper by renowned washi paper artist Kyoko Ibe, representing the embodiment of the traditional Japanese sense of unity with nature.

John Keith Russell Gallery, a specialist in Shaker material culture, consisting of American utilitarian craftsmanship and design, presented a rare sewing stand made in 1840 from linden and cherry wood: the minimalism of the easel is harmoniously contrasted by the inlay of the legs, which fit finely with a dovetailed play in the pedestal.

Nilufar Gallery in Milan, Italy, returned to Design Miami/ to present two contemporary designers who deal with the digital-Audrey Large and Khaled El Mays, who, with the “Afterglow collection”, seek to define the liminal space between the present and the future, questioning the dialogue between form and technique in which fluid silhouettes with iridescent surfaces seem simultaneously digital and physical.

Among this year’s new entries is Dolce and Gabbana’s high jewelry booth, which for Design Miami/ has created not only an impressive staging, but also small craft workshops in which to admire the skilled artisans at work in the process of Italian handcrafted jewelry creation that distinguishes the brand.

(On the title, Come stai? A chair by Gaetano Pesce with Matthieu Blazy for Bottega Veneta)