Risk: the students of the FIU Master in Fine Arts exhibit at the Patricia & Phillip Frost Art Museum in Miami. 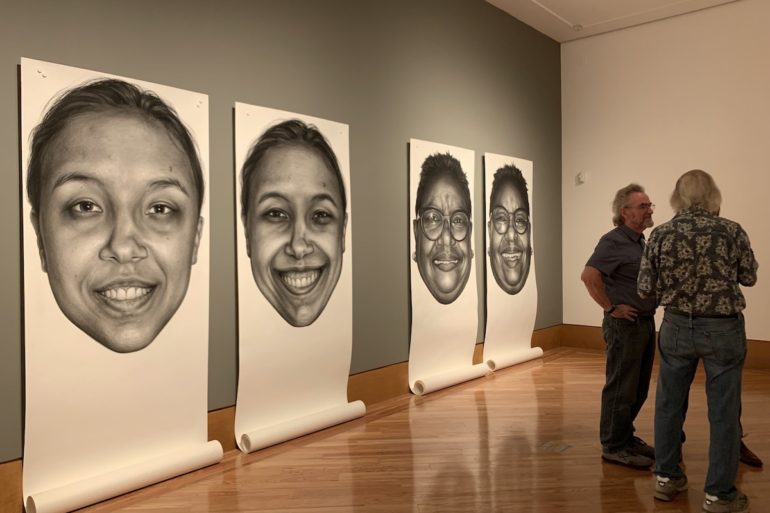 Risk is the theme of the FIU Master of Fine Arts student exhibition for the year 2019. According to the canonical definition, risk is the potential that an action or activity chosen can lead to a loss or an event undesirable, affecting the result. Not acting is part of the risk. Displaying your works is part of the risk. Letting people observe the subjectivation of art is a big risk that exposes the artist to himself. But without risk there is no game, without risk there is no tomorrow and without risk there is not the same satisfaction in taking an action because the risk and the fear that derives from the uncertainty amplifies the enjoyment.

Six were the candidates who exhibited their works at the Patricia and Phillip Frost Art Museum, Saturday 27 April: Gianna Dibartolomeo, Samantha Lazarus, Paul Perdomo, Stephanie Hibbard, Karla Kantorovich and German Ruiz. Six artists who made their works with different mediums but following the concept of taking risks.

To harmonize the right rhythm with which to observe the exhibition, are the cadenced words of the poet, playwright and writer among the most important of the twentieth century, the Anglo-American Wystan Hugh Auden: “Jump before looking”, which ends with ” … Our dream of security must disappear. “(Among the images of the gallery the text of the poem).

An artist born and raised in Miami, Gianna Dibartolomeo conceives the great work of art on display (Fragmented Flowers, Shine Bright, 2019) starting from the concept of representation of life composed of many more or less significant points, which each identify a goal (a degree, a marriage, the birth of a child, etc. …) Many different points in color (emotions) and represented in suspended pieces that run the risk of disappearing into thin air with the precariousness of the material on which the points, all linked together , rest (as life is precarious).

The photographs of the Nicaraguan German Ruiz (2016-2019) are inspired by the thoughts of John Szarkowski: “Citing out of context is the essence of the photographer’s job” which instead focuses the spotlight on people’s faces and on the ritual gestures of everyday life while the Venezuelan Paul Perdomo celebrates the risk of humanity in the ordinary and extraordinary aspects that manifest themselves in groups of people, of which he manages to capture the essence that combines with his enthusiastic Venezuelan background. His works on display are the quintessential Dolphins addicted.

The images of Jamaican Samantha Lazarus (Joshua, Samantha and Brenda, 2019) are rolled out in gigantic figurative works: charcoal works on paper that highlight how with facial expressions you run the risk of communicating much more than you want to say or make believe.

Combining fabric, threads, plaster and pigments and if the works of Anselm Kiefer express the risk with a political value, those of Karla Kantorovich refer to them for the use of colors and materials in which they insert metallic colors capable of amplifying the risk by reflecting it. Stephanie Hibbard’s abstract expressionism plays on the shades of green, according to which “There is no better path to follow than yours”, as a better definition of risk than that of meeting one’s own destiny with the insecurity that risk offers?