Milixa Moron, Carlos Martínez León and John Mejia at MIFA Gallery in Miami, May 19 through June 30. 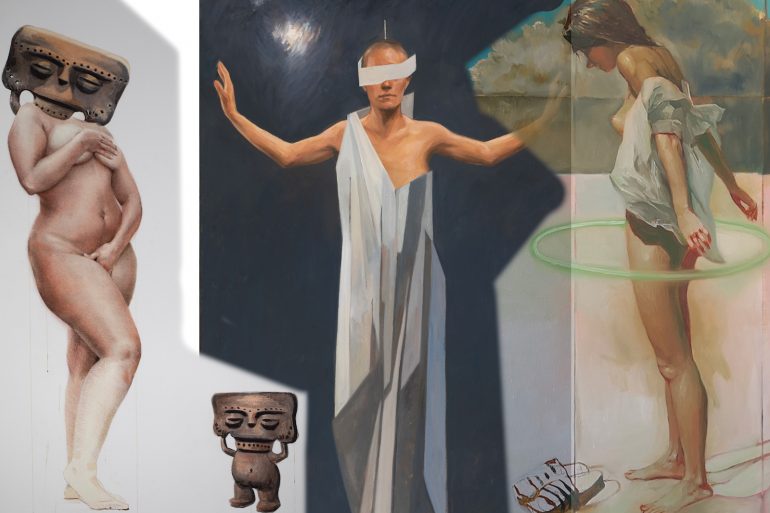 The official opening will be Thursday, May 19 from 6:00 to 9:00 PM ET at the MIFA headquarters, where it will be possible to meet the artists and interact to discover the ideas that led them to the creation of the works, on display through June 30, 2022.

The three solo shows are just a few of the varied exhibitions that MIFA Gallery routinely mounts in its large dedicated spaces in which some of the most important artists in contemporary art are highlighted with special emphasis on figurative artists .

Milixa Moron and Carlos Martinez Leon -for whom Miami Niche will produce two individual in-depth articles related to both their artistic journey and their solo show on display at MIFA GAllery- are well-known faces in Miami’s fine art scene. Both are professors at MIFA -Miami International Fine Art School- the school of fine arts, recognized by the ARC and modeled after Renaissance art ateliers.

In her solo exhibition “Origins” Milixa Moron will exhibit works in drawing. A choice consistent with the title of the exhibition since in fact “drawing is the basis of art, as the artist says. Milixa Moron’s works are characterized by a strong allegorical and ancestral component that refer to Venezuelan flora and fauna, the country where she is originally from. In creating the works, the artist used pencil, charcoal, ink and watercolor. With the latter in particular, she sublimely recreated the folklore that links the African origins of the pagan cult to the Venezuelan Catholic Church. There is also no shortage of references to the goddess of fertility and her propitiatory ritual-cult with which the artist stages more or less voluptuous bodies of the contemporary woman that she combines with African masks that refer -again- to the meaning of life and thus to origins.

Carlos Martinez León’s solo exhibition “Journey onto the Unseen” follows a long personal and spiritual journey in which the search for light has been the common thread. Through the sequential development of the works, the viewer is led on the journey made by Martinez León. A journey made of inner struggles in search of truth. The only available option that allows him to combine the sincerity of painting and the harmony of forms with his reflective and spiritual nature.

John Mejia is a Colombian-born artist who is a naturalized French citizen and resides in Mougins, French Riviera. The self-taught artist has studied deeply the greats of history, being inspired by them. He officially entered the international scene after the publication of the watercolor work “Pray for Nice” in “El Mundo” magazine. The work, made on impulse immediately after the dramatic terrorist attack that shocked France in 2016 on the Promenade des Anglais in Nice, has gone around the world as a tribute to the victims and the city.

Going through different work experiences, John Mejia managed to realize his dream of being a full-time artist and has, over time, executed multiple commissioned portraits of various celebrities, including soccer player Ronaldinho.  “I’ve always had a pencil in my hands since I was a child,” said Mujia, who also claims to have been greatly influenced by artist, compatriot, Fernando Botero and his iconic characters with extra-large features.

The exhibition at MIFA Gallery, “Le Valeur de l’Image,” is his first solo show on American soil. On display will be a number of large canvases that the artist has made over the past three years. An analysis of the works reveals distinctly some characteristics of the artists who have marked his artistic path: the features and expressiveness of the subjects of his works refer to the lines of Egon Schiele while the use of color refers to another representative of the Viennese Secession: Gustav Klimt. In Mejia, the colors take on a pop connotation due to their characteristic chromatic charge. The works, full of allegorical references to his homeland and made evident by the presence of exotic animals, emphasize everyday situations in which the characters, are suspended in a world between the dreamlike and the real in which time seems to have stopped and proceeds cadenced by the drafting of color as if it were watercolor.

(on the title, from left to right -details of- The Three Graces (dipthyc) by Milixa Moron; El Amigo Oculto by Carlos Martinez León and “Le Espejismo” by John Mujia)