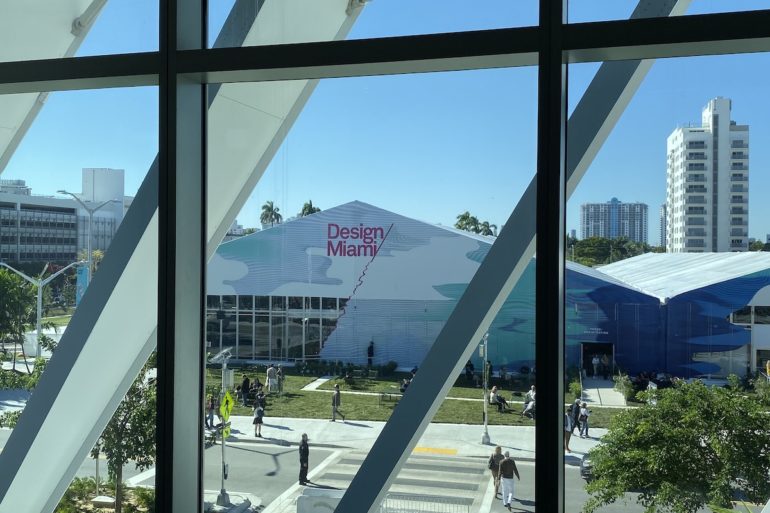 Design Miami, now in its 15th edition, is the fair synonymous with collectible design, which this year occupied the spaces of Pride Park, just in front of the entrance of Art Basel in the Convention Center. The exhibition with the same name in Basel, Switzerland, has achieved this year a quality of museum level with 15 Curio projects, collaborations and satellite installations scattered around Miami and Miami Beach and the beauty of 34 galleries from 15 countries around the world (and with some new entries including: the Erik Thomsen Gallery in New York, the Galerie Scene Ouverte in Paris and the AGO Projects in Mexico City) that have reconfirmed Design Miami a real success with extraordinary sales.

On display are collectible design objects that include 20th-century works and extraordinary 21st-century design pieces that have attracted public and private collectors of some of the world’s most important historical and contemporary design, including Al Elber, who is an avid collector, author of the blog Scoop on Design and Trustee, Cooper Hewitt, Smithsonian Design Museum.

The official press presentation took place in the new and elegant space used as a Design Forum and Media Suite, designed by SCAD-The Savannah College of Art and Design, played on the blue, green and pink velvet tones of the carpet and on the teal of the walls. Water has been the dominant theme of the 2019 edition with everything it represents and that follows at the gates of 2020.

At the show, the ubiquitous mayor of Miami Beach Dan Gelber, who emphasized the sense of place that Design Miami, with Art Basel and all the entourage has been able to create in the city of Miami Beach. The idea, as reiterated later by Craig Robins, present along with Bernt Stadiwieser – a member with Robins of the Board of Design Miami – started in the wake of the Venice Biennale fifteen years ago, and since then it has made a lot of it becoming one of the landmarks of design around the world. Jennifer Roberts and Arien Chen, respectively Chief Executive Officer and Curatorial Director of the exhibition made a brief introduction about the galleries and the proposed projects thanking the valuable sponsors among which: Lexus, the Maison this year, Perrier-Jouët, who collaborated with the Italian Andrea Mancuso in the creation of six glasses of the Metamorphosis line, combining traditional craftsmanship with modern technology, which were presented in a kind of immersive cave composed of thousands of pieces of pottery that refer to the vineyards of the maison and its cellars; Swarovski who presented the installation Water: an immersive space that honors the world of water and forest as an inexhaustible source of inspiration for the brand, and  finally Cosentino who collaborated with the duo PATTERNITY in the presentation of Liquid for Dekton: the state-of-the-art ultra-compact large-format surface that shows a pattern inspired by the fluidity of the water.

In addition to the sponsors, the numerous partners among them include: FENDI that has proposed some of the ten design pieces that are part of the Roman Moulds designed by Kueng Caputo and intended to decorate the external colonnade of its historic headquarters in the Palazzo della Civiltà Italiana in Rome. And then, Louis Vuitton and its Objets Nomade (fabulous the Bulbo armchair by Campana Brothers); Evian, who has proposed a Limited Edition of the glass bottle designed by Virgil Abloh and Delta Airlines that, in collaboration with The Sacred Space Miami, has presented one of the largest installations ever exhibited within the spaces of Design Miami: Roots, by Atelier Marko Brajovic, curated by the famous Ximena Caminos and produced by Alberto Latorre.

Finally, satellite-partners include Officine Panerai and the Miami Design District with which the Mexican designer Fernando Laposse collaborated, creating his Pink Beasts scattered around the neighborhood (for more information read the article of December 18: What are the strange Pink Beasts that invaded the Design District?).

The museum level of the exhibition has reached very high artistic levels this year that have materialized in the core-business of Design Miami: the Galleries but also in the Curio platforms. Among the galleries is AGO Projects in Mexico City and New York, which encourages the beauty of handmade works by supporting artists and designers who have a high level of social and environmental awareness and who are fighting for a fairer society, among the works on display the benches by Fernando Laposse that recall the Pink Beats. In the Jason Jacques Gallery, “Moss People” designed by Kim Simonsson, are life-size moss-clad clay sculptures that depict children guiding the viewer into an imaginative and fairy-tale world inspired by the forests of Finland, his native land. There were also fixed presences such as CONVERSO, the gallery founded in 1994, which has become over time one of the most appreciated retailers in America with furniture by architects, rare prototypes and limited edition among the most sought after by collectors. The Southern Guild, on the other hand, has exhibited collectible contemporary designs by South Africa’s most exciting talents, including Porky Hefer, and his wonderful suspended vernacular seating, which had already seen him take the center stage last year.

Among the galleries on display are two Italians: the Antonella Villanova Gallery in Florence, which promotes the work of internationally renowned jewelry artists, offering a new aesthetic and conceptual interpretation of the ornament, with design-related projects and contemporary art; and Erastudio Apartment-Gallery, founded by Patrizia Tenti, which is based in the Brera district of Milan and exhibits unique pieces, prototypes, limited editions and exclusive projects created by historical and contemporary masters with an eye for art and design pieces related to the era of Italian radical architecture of the 1960s and 1970s.

Among the galleries that have brought historical design names: the Galerie Patrick Seguin, based in Paris and London, with pieces by Le Corbusier and Jean Prouvé and The Moderne Gallery in Philadelphia with works by Harry Bertoia and Paul Frankl.

Among the Curio projects, which invite designers, architects, curators, innovators and gallery owners to present immersive environments of objects, artifacts and ideas that challenge and contextualize design narratives with special care towards research presentations in Circulation, the project presented by Rooms Studio of the Soviets Nata Janberidze and Keti Toloraia: a project born from the memories of children linked to the concept of freedom expressed through the graffiti of two concrete benches, the “Bus Stop Benches”, created in collaboration by the Georgian visual artist Max Machaidze; the Tangara collection by Luis Pons Design Lab, which uses the wooden hinge as a functional and constructive method to create systems that give life to elements of refined and complex carpentry. The Harry Alle Design instead presents Portrait Vessels: 3D printed ceramic sculptures that are made thanks to a sophisticated form of scanning (present at the fair) that reproduces faces and half-busts that can then be customized with glazes and finishes such as gold and platinum.

In addition to the exhibition itself, cultural training was also important with the presentation during the different days of 18 Talks attended by industry experts, creatives, collectors and critics who influence the production of design, and who covered themes related to the city of Miami such as the opening of the Rubell Museum with a talk focused on the architect Annabelle Selldorf (Designing Spaces for Art) who spoke about one of Miami’s largest contemporary art institutions, or the water problem (A/D/O: Designing Water Futures) that addresses the challenges on the urgent need to reinvent water culture for the 21st century and the role of designers in responding imaginatively to the challenges of the global water crisis, a reality that affects not only Miami but the whole world; but also themes of general interest such as: Natural Fibers and Dyes in Contemporary Design: Workshop and Conversation with Fernando Laposse, Angela Damman, and Jacobo Mendoza, The Transformative Power of Design and again, with the extraordinary representation of Wolf Burchard (Associate Curator of Metropolitan Museum of Art) Odd and Beautiful: Unorthodox Takes on the Met’s New British Galleries, with the discussion of the opening scheduled for 2 March 2020 of the revamped British Galleries, which have 700 works of decorative arts and design created between 1500 and 1900.

All and even more so for Design Miami who defined how design is the right fit or form and function because a good piece of design has the ability to transform our vision, influence our perceptions and alter our reality.

While waiting to take part in Design Miami/Basilea from June 16 to 20 2020, we just have to buy the new and more authoritative design bible presented at Design Miami: Atlas of Furniture Design, published by the Vitra Design Museum.