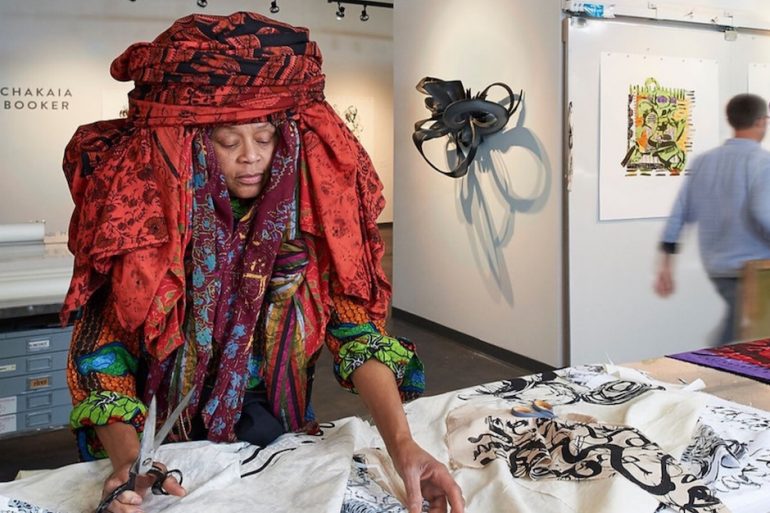 Third day of Miami Art Week where, after a long walk through the lush green of the palm trees and the intense blue of the Miami Beach sky, Miami Niche makes its way to the suites of the Dorchester Hotel, on James Avenue.Here on the occasion of the craziest week of the year, even the hotel rooms take on the guise of an art gallery, in this case for INK Miami. The exhibit is somewhat reminiscent of Superfine, the art fair that preferred to wait for better times to come around and will return to Miami in March 2022.

INK Miami is the only fair in Miami Art Week that focuses on modern and contemporary artist prints, both internationally renowned and niche and therefore reserved for lovers of the genre.

INK is presented by IFPDA -International Fine Print Dealers Association- and its exhibitors are selected for their exceptional ability to offer collectors a diverse survey of 20th century masterpieces and newly published editions by leading contemporary artists. Since its founding in 2006, the fair has attracted a loyal following consisting of museum curators and collectors.

Among the names proposed by the different participating galleries there are more or less known names: Man Ray, Andy Warhol, Louise Nevelson, Tom Wesselmann and Alex Katz, and less known artists such as Sue Fuller, James Siena, Will Cotton and Kelvin Mann, master printer who works on behalf of many artists at Stoney Road Press.

A different fair from the others and very interesting, all to be discovered.

Art Miami + Context opened the day, as usual in the marquee set up near the Julia Tuttle Causeway. Art Miami + Contest always represent the ideal compromise between the glamour and the excess – even in terms of costs – of Art Basel and the boldness of the colors of Red Dot Miami and Spectrum, which are sometimes so eccentric that they would make your head spin if it weren’t for some exceptions, such as the works of Miami street artists, among which Atomiko, who with his crazy “orange” makes the city “mad” and invaded.

Art Miami+Contest confirmed the idea that we had already had with Untitled Art Fair and Art Basel that there is -finally- the great return of realism in every form: from figurative to landscape and still life. A demonstration of this are the exhibitions proposed by Liquid Art System -gallery in Positano, Italy- which exhibited, among others, the works of the famous master Roberto Ferri, one of the greatest representatives of Contemporary Figurative Realism, as well as the Stefano Forni Gallery which presented the works of the recently deceased Luciano Ventrone, an undisputed master of hyper-realistic still life representation: in particular fruit and flowers but who also boasts a small -and precisely for this reason sought-after- body of figurative works. The Pontone Gallery proposed instead the works of the figurative master Malcolm Liepke and the Italian landscape artist Matteo Massagrande. Simply extraordinary.

Among the artists represented also many street-artists, among them: Mr.Brainwash with works of gigantic dimensions, side by side with those of Hijack. Photography, which has long been considered an artistic form in its own right, takes shape in the works of Yankee artist David Drebin. Whoever buys David Drebin’s photographs will also receive a golden Limited Edition of his book produced by teNeues. The artist Frank Hyden, assisted by his indefatigable wife Helen, brought to the stage the works of the Project Gallery of Wynwood, Miami.

As every year during the days of Hanukkah or the Feast of the Lamps – the Jewish festival of the consecration of the temple, whose ritual has also been adopted by the Catholic Church for the dedication of sacred objects and places – this year too, on Lincoln Road, the installation “Seashell Menorah” by the famous artist Roger Abramson is staged. With his works, he wants to motivate people to sacredness, regardless of religious affiliation. “Every night we add another candle, and it’s to show that light overpowers darkness. This is life, it is a gift, and we’re lucky to be here. Right now, that’s what matters”, said Chani Katz, wife of Rabbi Dev Katz of Chabad Jewish Synagogue of Miami Beach. Members of the Miami Beach Jewish community will light the eighth candle on the shell menorah on Lincoln Road on Sunday, Dec. 9, 2018.

There are always a thousand attractions to follow during the week of art and although the fairs and indoor events are swarming with people, are not less than the streets of the Magic City, where street artists work incessantly in the realization of their “paintings” to clear skies.

(on the title: Chakaia Booker at Flying Horse Editions for INK MIami, 2021)