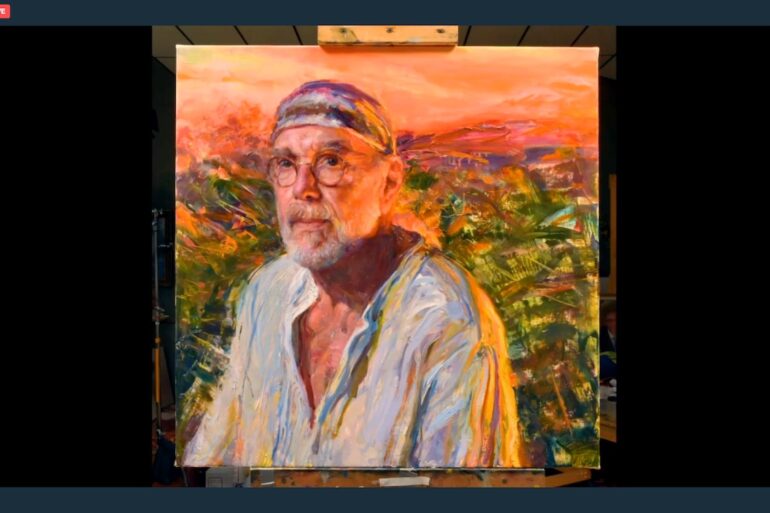 The third and final day of the third edition of Realism Live, ended amidst the wonder and amazement of the participants, who witnessed under the algid of Eric Rhoads and Peter Trippi -the faces of Realism Live- a succession of beautiful demonstrations that kept them glued to the screen with the intention -almost impossible- to be able to take note of every piece of information and every step.

Fortunately, the once again impeccable organization of Streamline Publishing and its large team thought of this as well, offering the opportunity to see up to a year after the convention ends, the recordings to be available starting tomorrow.

It was Pier Guidetti, a well-known and beloved face of Savoir Faire who opened the day’s pre-convention session. He did so this time, informally, in a pleasant dialogue with Sarah Webb -vendor and convention marketing at Streamline Publishing- and the always large audience that regularly attends his sessions and the live talks he does, every Friday at 5:00 Eastern Time, on the @artsavoirfaire channel on Instagram.

What is striking about Pierre Guidetti, an unmistakable character, in addition to his invaluable knowledge of materials and artistic techniques, is his simplicity and willingness to give advice. The number of testimonials, which even today have honored him, could be an interesting starting point for the writing of a book, entitled: “How art supplies has changed people’s lives.”

In fact, his adventures in the art world began precisely forty years ago, when Dominique Sennelier decided to entrust him -“a young hippy,” as he called himself- with the development of the brand in the American West. Since then everything has been a beautiful fairy tale, which began with the meeting of the artist Maureen Llabro, who later became his wife and mother of his children -as well as working partner- and continues to the present day with the friendship of well-known faces in the international art scene, among whom he mentions: Gerhard Richter, David Hockney and the late Wayne Thyebaud.

It was Norwegian artist Cornelia Hernes who got into the swing of the journey technical sessions. The artist, remembered by the audience for her portrait demonstration in the last edition, is always very clear and precise in her explanations. She was so again this time in the still life demo at alla prima painting, made from a varied composition in terms of materials and textures. The compositional process developed by Hernes started from the general blockin of forms, and then went into the definition of individual elements -proceeding from side to side and from the background to the foreground- until the final details were realized. The choice made of materials and their dimesions-copper, porcelain, fabric, flowers, and glass- involved a series of considerations that ranged over several topics: the different refraction of light, the curvature of the elements that -when placed in relation to the horizon line- act as control points in the compositional process, and the transactions of light and color.

If for copper Hernes advocates the need to preserve the chromatic color and saturation of shadow shapes, shadow shapes in the making of porcelain requires attention to the use of white. The key points of the compositional process were the combination of design objects and the search for their balance point for which, “one must be selective”, said the artist, in order to render a composition that ensures adequate spaces that can highlight the depth and three-dimensionality of objects, for which transition values play a key role. Hernes’ compositional elements emerge gradually and in synergy with each other making the whole harmonious.

Daniel Graves’ participation in the third edition of Realism Live was well worth the ticket price. Founder of the historic The Florence Academy of Art in Florence, Italy, from which some of the most important contemporary artists have emerged, Daniel Graves is a traditional “craftsman” artist, who demonstrated, step by step, the process of preparing the gesso panels he usually uses for his paintings. Beginning with the basic making of “Rabbin skin glue,” a heat-reversible glue, capable of ensuring the perfect adhesion of the canvas-strictly linen-to the support, he laid down three layers of gesso. Gesso that he prepared according to his personal recipe dispensed to the participants and which he spread in three different layers, alternating vertical and horizontal brush strokes so as to completely impregnate the fabric. After refining the surface with a fine sandpaper, he insulated the surface with shellac-strictly handmade-which he mixed with the pigment in such a way as to create an imprint on the canvas. “I believe it’s important to know and understand how some of our materials are made. Whether we do this or not.” said the master, who says how personal preparation of the products allows for desired result. Not an easy job, in terms of cost and time, but one that differs from products found on the market both in terms of quality and yield.

Recognized among America’s greatest contemporary landscape painters Clyde Aspeving entertained attendees in a session. A session not only demonstrative but also celebratory , in which he recalled the intimate life moments made up of travel, people, books and quotations, which most influenced his way of celebrating art, of which he considers himself a: ” Land Snorkeling to wander and wonder with no destination in mind.” A definition this coined by his wife Carolyne during one of their countless trips in contemplation of nature.

Born among the landscapes of Montana to musicians, Aspeving learned to cadence musical notes to the soundscapes of brushstrokes that find their greatest expression in the opening blockin. For Aspevig, “painting is a celebration of life” and he consider himself as a privileged man with the idea, clear in his mind to, “put gasoline in the power.” From the celebration of life flows his definition of art as the ability to make events possible through the set of decisions that the artist, in his dimension, is required to make each time in each process of composition.

In addition to showing the importance that the frame exerts on the final result of the work, Aspevig showed the approach to the early stages of landscape painting that he executed from acrylic underpainting in which lines and shapes help build the overall composition, which from forms of pure expressionism become pure realism.

The rhythm of demonstrations was interrupted in the afternoon for an interesting panel discussion in the company of Mario A. Robinson and Sharon Sprung, interviewed by Peter Trippi.

In the dialogue between these two artists, who are completely different in style, a fairly clear picture emerges regarding the change in society post Covid, with all the realtivies on both sides of the coin: on the one hand there is the great connectedness that the pandemic has created, allowing the world to connect with a simple “click”; on the other hand there is the creation of an empty and ephemeral digital world where appearance matters more than substance. It was an interesting conversation that also put the spotlight on the downsizing of the art market that happens less and less through galleries -which sometimes charge up to 30% commissions- in favor of direct contact between buyer and artist. Contact that most often takes place on social media and is sometimes followed by personal acquaintance. From the meeting of the two artists with Peter Trippi it emerged how Mario A.Robinson’s style tends to emphasize nature and architecture, moreover related to the African-American environment in which he was born and raised, while Sharon Sprung’s painting, who became famous especially for the commission of the portrait of former first lady Michelle Obama, tends to represent figurative works rich in symbolism that focus on the big questions of life.

British artist Terry Strickland, who has already been featured in a demo in the past, pointed to the realization of flash tones, a subject that always draws the attention of the audience because of its complexity of execution.

The simplicity with which Strickland approached it showed the logic of this artist’s thinking, endowed with great rationality and expertise. Indeed, with a clear schematic process, she was able to translate a complex subject into simple and practical diagrams, both to understand and to carry out.

For the demonstration, she portrayed two women: one white-skinned and one black-skinned, and created her palette from the location of the five key colors on the surface of the faces. A versatile palette that can be used universally. Starting with a general color, she then derived the five main variations from which she constructed a multiplicity of shades that can cover the entire spectrum of skin tones in the different planes of the face. Planes of the head he treats as if they were individual pieces of a jigsaw puzzle that eventually come together in a perfect and harmonious way thanks to the transactions of color, performed essentially on the basis of temperature, in a continuous balance between tonal and chromatic values. “Every mark is the best that we know about when we made it,” Strikland declares about the importance of the last mark did.

The divine Rose Fratzen was the last artist of the day, and she was, as usual in her demos, a real energizing tonic.

Already the protagonist of the previous demonstration for Savoir-Faire, in which she showed the use of stick oils, which she declared will soon be available on the market also in a softer version, Rose Frantzen is everything and the opposite of everything. In her, the abstract expressionism of her early brushstrokes -which are largely gestural and in which the artist’s nonconformist soul seems to seep out- and pure realism, which she is able to capture sublimely at the end of the work in a constant back-and-forth and in close-and very entertaining-dialogue with the audience, come together. Frantzen is a tornado of ideas, spontaneity and depth whose concreteness materializes in the portraits, in which her soul succeeds in extrapolating the soul of the represented subject.

The third edition of Realism Live has come to an electrifying end. The Streamline Publishing organization has already published the dates of the upcoming events scheduled for 2023 and invites you to subscribe for free to the multiple newsletters featured by typing on the following link: https://streamlinepublishing.com/art/

Miami Niche looks forward to seeing you, as always at the next Watercolor Live event that will be online, January 26-28, with optional beginner’s day on the 25th.