And the last of his pieces is… The First Supper: Romero Britto honors the genius of Da Vinci on the 500th year anniversary of his death. 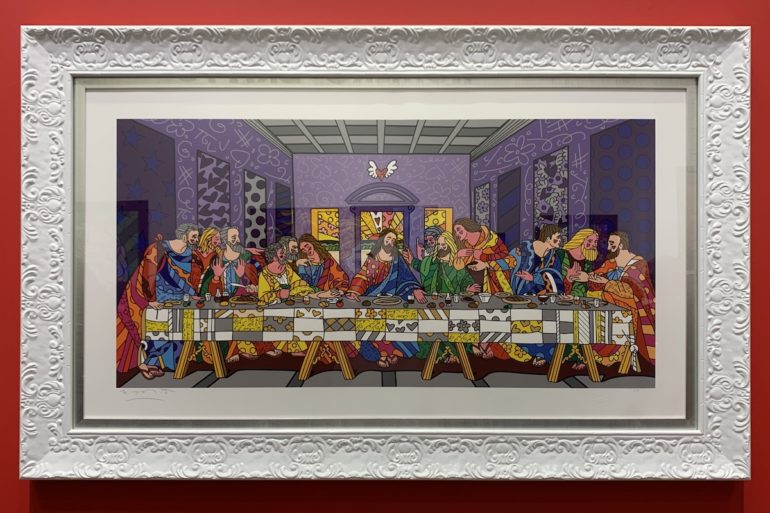 Romero Britto reveals his last piece, The First Supper, in occasion of the event held in his gallery on Lincoln Road.

Inspired by his trip to Italy last year, as a guest to Domenico Dolce, Stefano Gabbana and Guilherme Siqueira, Britto was able to see one of the world’s most famous pieces by DaVinci: The Last Supper, also known as Cenacolo Vinciano.

The Last Supper is a wall painting that measures 640cm by 880 cm, painted in 1495 and preserved in the ex-Renaissance refectory of the convent adjacent to the Sanctuary of Santa Maria delle Grazie in Milan. It was commissioned by Ludovico Sforza, and that took the Italian master three years to make because of his choice to use paint and oil on chalk, differently than what people used back in the day for painting on walls.

The piece represented by Romero Britto wants to be a celebration to the mastery of Leonardo Da Vinci on the 500th anniversary of his death, while the name The First Supper, was suggested by the artist’s friend and art collector Ezra Nahmad. The piece is acrylic and diamond powder on canvas, measuring 60”x120” and it’s filled with the energy that distinguishes Romero Britto’s pieces. While the original artwork represents the amazement of the disciples in the famous scene in which Jesus reveals the traitor, with such power and reality, on the other hand, Romero Britto substitutes the use of light and the warmth of the piece by using his bright and vivid colors, and images of hearts that are often used in this canvas.

The piece will be available for purchase (price by request) and a limited series of 100 pieces, all autographed by the artist will also be produced, printed on paper (20”x40”) at the price of $1618.

For the occasion, Romero Britto amazed his guests by setting up a banquet worthy of a last (or better still, first) supper, richly embroidered with flowers, fresh fruit, cold-cuts and dishes that could satisfy the eye, aside from the taste buds, all while the Khaos quintet cheered the night with live instrumental music. A big art piece all together: The First Supper, now available in Romero Britto’s Gallery.

(On the title The First Supper by Romero Britto)