Inauguration of the exhibition and the book The Art of Sherlock Holmes: painting becomes universal, bringing together techniques and styles in the name of a great character. 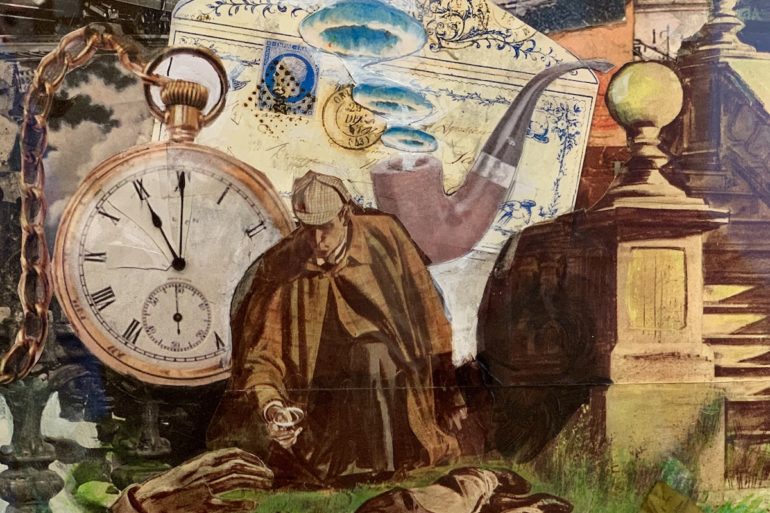 The beautiful Ann Norton Sculpture Garden of West Palm Beach was the location of the event that combined the release of the book with the exhibition The Art of Sherlock Holmes, curated by Phil Growick and on display from May 10th to June 3rd, 2019.

On the occasion of his latest book, Phil Growick abandoned (almost completely) the role of the writer to dress that of the curator of an ambitious project that begins with the West Palm Beach Edition: a tribute to the artists of the city where he is resident, which represents the short stories of American writers, defined as “Fiction facts in fiction”.

The project is structured in several phases and is divided into its first edition of 15 short stories, assigned on the basis of affinity of style of the writer, and 15 artists, each of whom has created a work. Phil Growick wrote the story Two Plus Two for the event, artistically represented by Vicky Siegel’s work, The Mistery, in the interpretation of which the artist combined the characteristic multi-layered photographic art, with acrylic colors for the realization of the foreground of the protagonist, who plays on shades of red, pink and blue.

The Art of Sherlock Holmes – West Palm Beach edition – was the first edition of a long series (the first US Edition, due out in October) and is part of a much larger project that will include artists and authors of the Sherlock Holmes stories, coming from all over the world.

At the official celebration on Thursday May 9th,  for the release of the first volume of the book (available on site at the exhibition set up for the inauguration by Classic Bookshop of Palm Beach at a cost of $ 64.95), followed by a great ceremony attended by members of the Ann Norton Sculpture Garden, with their CEO, Cynthia Canai, creator and curator Phil Growick, Englishman Steve Emecz and some artists and authors of the project. The event will be followed live by the May 25th celebration (May 22nd will be the 160th anniversary of the birth of the author Sir Conan Doyle) with the Sherlock Holmes Convention from the author’s birthplace in London. The link will be available at 5:00 pm, London time and part of the proceeds, collected by Undershaw (the house initially designed by Sir Conan Doyle for his sick wife, which became a museum in 2016) will go directly to the Stepping Stones Charity, organization that deals with children with disabilities.

But if for the stories it is necessary to read the book, the works of the artists have been presented: 15 artists, 15 different styles ranging from abstract, contemporary, digital, realist, minimalist to symbolist, with different artistic techniques that refer to the world of illustration, comics, sculpture and even to the world of tattoo art. Many different ways of interpreting Sherlock Holmes, who has become the most famous investigator in the history of crime fiction, a cult, known and loved by everyone, and characterized by the inevitable accessory that, as frequently represented in the interpretation of the works on display, defines its character: the pipe, the magnifying glass, the double-breasted revenue card (which Dr. Watson also used to wear) or the iconic ulster. In addition to the home of Sir Conan Doyle, Sherlock Holmes boasts its own museum, set up at 221b of Baker St, in the Marylebone neighborhood of London. Among the artists present at the party, who elaborated the stories of the West Palm Beach edition in addition to Vicky Siegel, there were:

Antony Hernandez: An old acquaintance of Miami Niche (see August 21st article, 2018 The chain reaction and the disruptive colors of Anthony Hernandez, (have a look at the article of August 21th, 2018: The chain reaction and disruptive colors of Anthony Hernandez), his colorful, fresh and fun art, which also represents his artistic signature, combines the character, strictly in black and white, with colorful images that refer to the events of the life of the represented subject and / or his characterizations. The proposed work is “Young Sherlock Holmes” (combined with the tale The Tale Of The First Adventure by Derrick Belanger) which also appears on the poster of the event and represents the protagonist of the story (in a mix of self-portrait as a child) with images that accompany the viewer along the path of history; the impeccable Bruce Helander: fully dressed by Sherlock Holmes, he is a well-known artist and gallery owner, and his works, mainly collages, are housed within the walls of some of the most important artistic institutions in the United States of America: The MoMA, the Whitney Museum, the Metropolitan Museum, the Guggenheim, the Art Institute of Chicago, and the Smithsonian to name a few. In the work created, “Home is Where the Heart Is” (combined with the short story The Adventure of The Parisian Butcher by Nick Cardillo), it is easy to guess his time as an illustrator for the New Yorker through the composition of the work that represents the story -telling narrated through a collage of images.

Andy Pereira, composed “Enigma” (combined with “The Adventure of the Smith Mortimer Succession” by Daniel D. Victor) inspired by the impressionist colors combined with the black and white silhouettes, while Lupe Lawrence for the homonymous story “The Adventure of The Long-Lost Enemy” (by Marcia Wilson), represents the story by inserting the spectator in the dreary climate of a typical English day with Sherlock Holmes and his trustworthy helper from behind. Several figurative works are proposed: Amber Tutwiler that with the homonymous opera combined with the story “An Affair of The Heart” by Mark Mower, bursts with a work inspired by the representation of a nude from life while “Untitled” by David Teal combines the story The Jet Brooch by Dannis O.Smith with a scene full of suspicions punctuated by the intriguing presence of the characters in the living room and JR Linton, a skilled artistic tattoo artist, revisits the role of illustrator for an acrylic version on a blackboard, “The Other Eye”, combines to the story Sherlock Holmes and The Other Eye, written by Richard Dean Starr and E.R.Bower. Nuné Asatryan associates the shapes inside the shapes of oil on canvas “Allure” (combined with the story A Ghost From Christmas Past, by Thomas A.Turley) to the acrylic coating structure, playing on the colors of Pop-Surrealism , the improvised piece by Bobby Franano, “The Deadly Soldier” in which the figure of Sherlock Holmes is surrounded by colored silhouettes of the homonymous story by Spencer Perkins.

The work of Terre Rybovich is entirely composed of shades of gray of the palms of the hand, to the image of her as a child, adorned at the bottom of the work by vibrant flowers played on shades of red that break the ethereal rhythm of the composition. The work is taken from the homonymous short story by David Marcum “The Stolen Relich”. The street artist Eduardo Mandieta, known as EMO, with the painting “Watson and Lestrade” (inspired by the story The Adventure of The Sleeping Cardinal by Jeremy Holstein) combines raw urban art with graphic design with an acrylic on canvas that represents the protagonists of the story with behind the silhouette of Sherlock Holmes who investigates with his art of deduction, while Tracy Guiteau elaborates her canvas “The Tranquility of the Morning” (the homonymous work by Mike Hogan) with elaborate detailed lines that make up the image. Pat Crowley with a cartoonist past for the magazine The Hill, by Washington D.C. presents “This, I Think, will be enough to convict our man …” paired with Paul W. Nash’s work The Adventure of Paradol Chamber. Absent the sculptor Robert Saint Croix who reworked the story The Case of The Petty Curses by Steven Phillip Jones with his work in digital collage.

An unusual way, definitely fun to make art that distracts from the ordinary, and has received excellent feedback among the participating artists. And while we shine our eyes with the works of The Art of Sherlock Holmes – West Palm Beach Edition – we have only a foretaste of the coming edition, scheduled for October, while the eyes see in the garden the sculptures by Gino Miles (in exhibition until June 30th) and those of the landlady, Ann Norton.