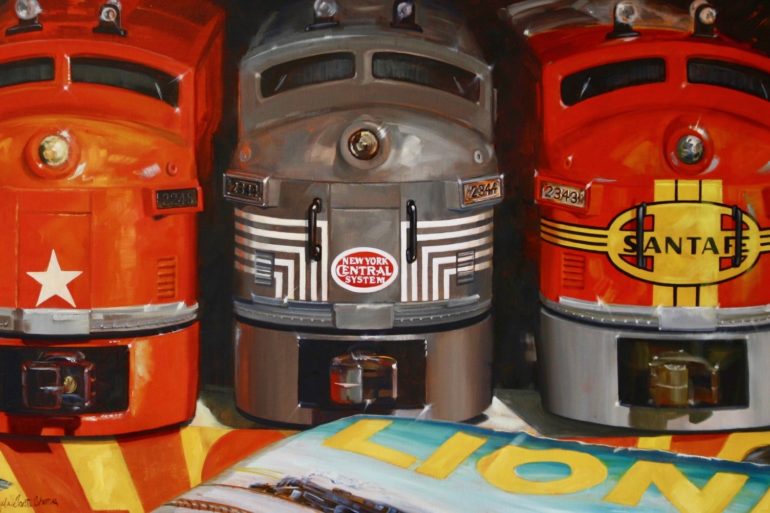 Speaking of the Lionel trains without mentioning Angela Trotta Thomas is a bit like talking about Las Meninias by Velasquez without the auto-representation of the author standing on the left of the work, intent on capturing the moment or, without necessarily wanting to talk about art, is like making a Milanese risotto without the saffron pistils. It’s a half-talk, a half-done job because the beauty of the Lionel trains immortalized by Angela are, just  like the trains themselves, so much is the realism that knows how to instill in his works.Her paintings are a precious patrimony of American popular culture. It is no coincidence that Angela Trotta Thomas is the only painter who got the license from the famous train manufacturer Lionel Trains Inc. / Lionel LLC maintaining this honor for many years and still today, to the point of being dubbed the Lady of Trains, and it is not difficult to understand why: just look at her works in the gallery below to understand why.

I was lucky enough to see her working on a small oil piece she represented closing the 48th meeting of LCCA in in Chicago. A work not intended for sale but a charity auction for real collectors. 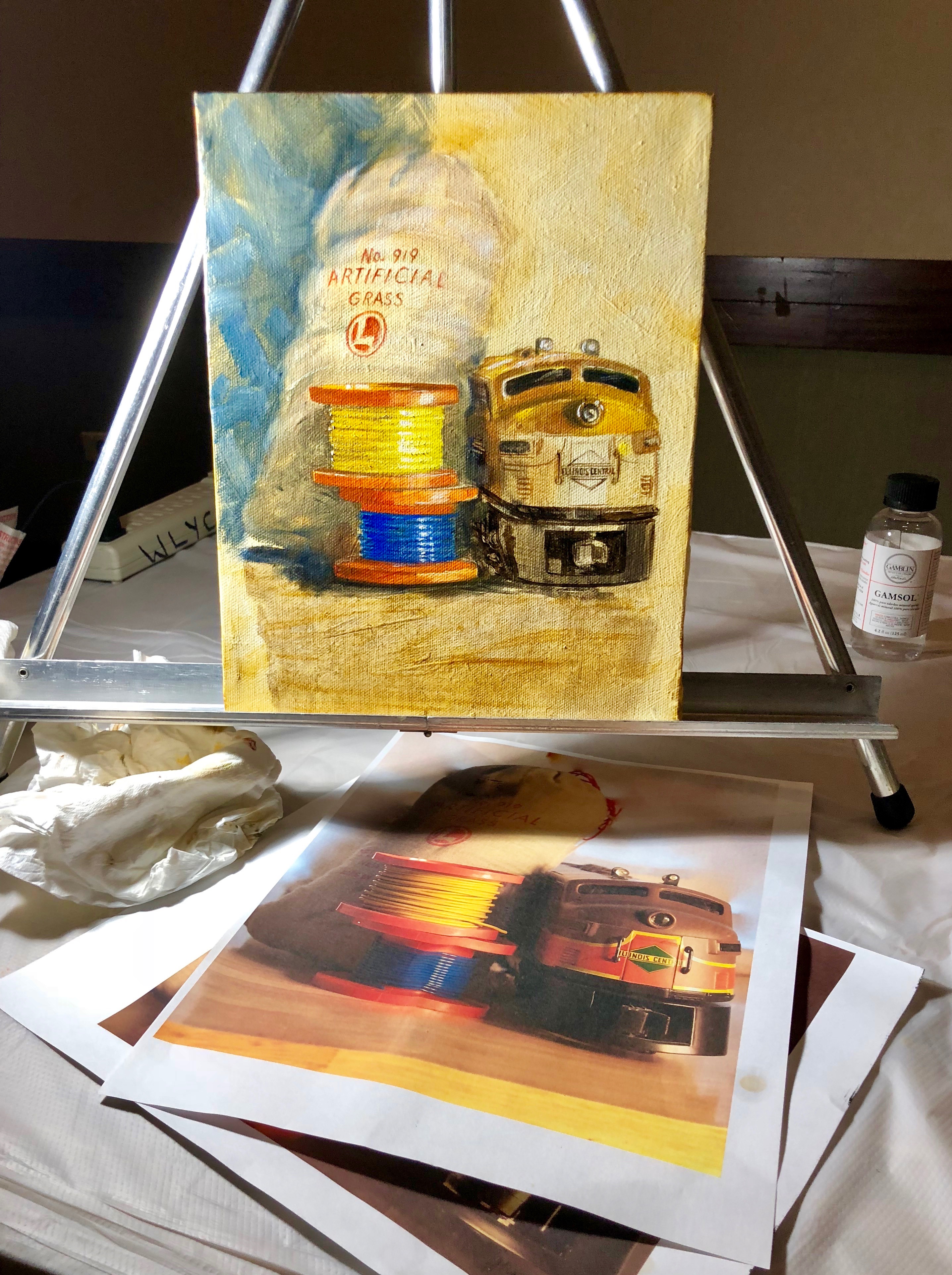 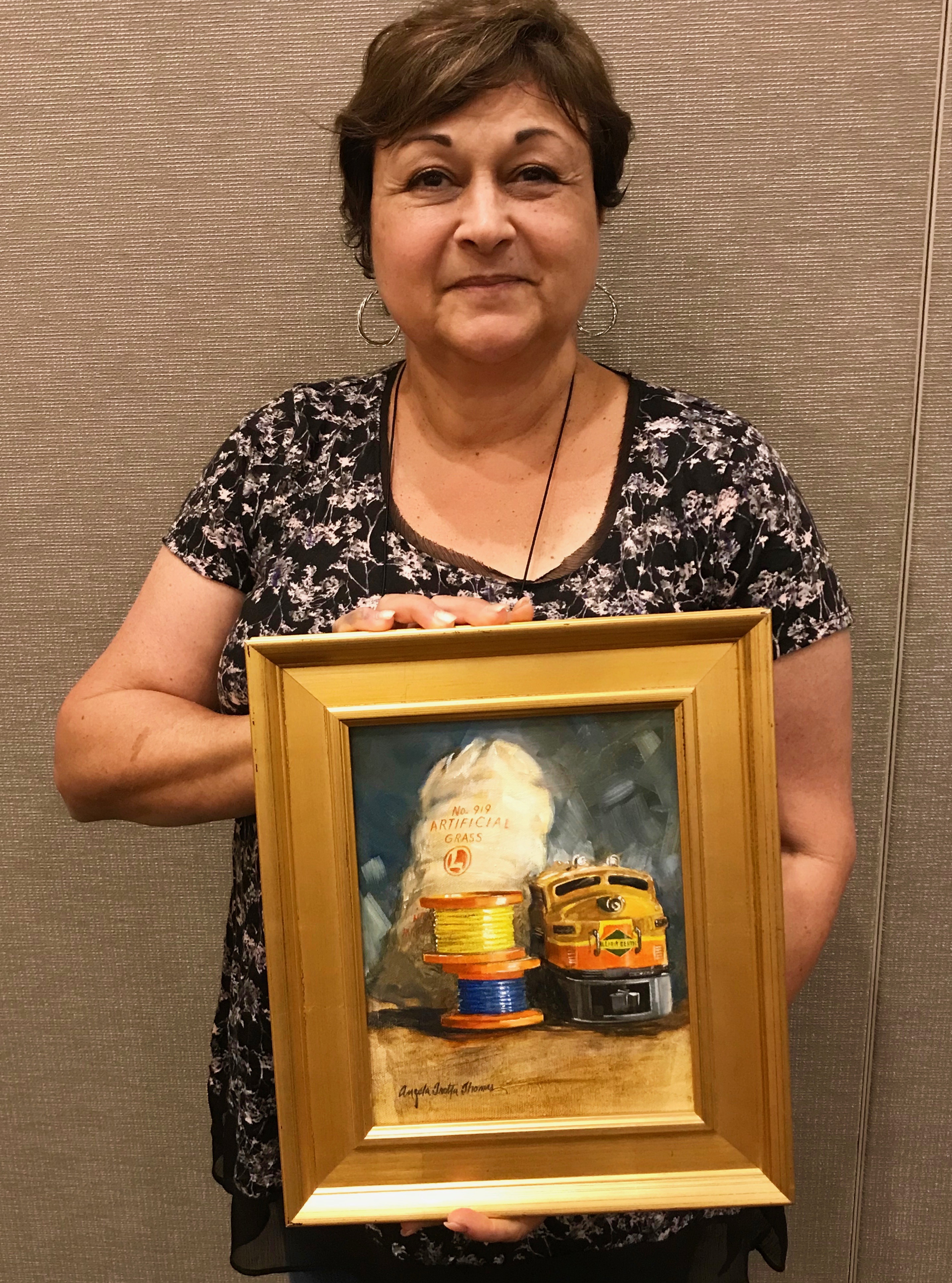 A meticulous and precise work, marked by the times of oil, and who chews oil painting, knows what I’m talking about. “Painting a train”, says Angela “is really a work of precision made up of a thousand details and nuances that allow enthusiasts to appreciate their peculiarities”. Seeing a painting by Angela without stretching the arm with the intention of taking the object represented is a common sensation, given the sense of reality and three-dimensionality it offers. The ability to make details, colors and shades are incredible. At times, looking at her works, I seem to grasp the nuances of another great American, on whom she has long debated on considering him a painter or illustrator: Norman Rockwell.

Like Angela, in his works, Rockwell painted iconic everyday scenes, with well-defined contours and the precise use of colors that could make the scene alive, real, situations of pure American popular daily life.

But Angela’s art is not just about the representation of trains, her artistic path is complex and is also composed of works that recall the Impressionists and painting en plein air. Famous is the Charleston series, a place in South Carolina, in which she moved many years ago and that has entered the soul to the point of painting the scenes. And admiring the works not inherent to trains (although to be honest, in a few paintings does not appear almost in passing a train) it is remarkable to observe the change of style. But analyzing the life of Angela we realize that after all the changes have never frightened her and that on the contrary they have benefited her: in 1991, with a well-run work as a commercial artist and two children to raise, she decided to enroll at Marywood University in Dunmore, Pennsylvania. The achievement of the master gives her the opportunity to become the leading toy artist in America and one of the few women artists of classical art applied to the automobile industry, which she exceptionally elaborates with minuteness of details. 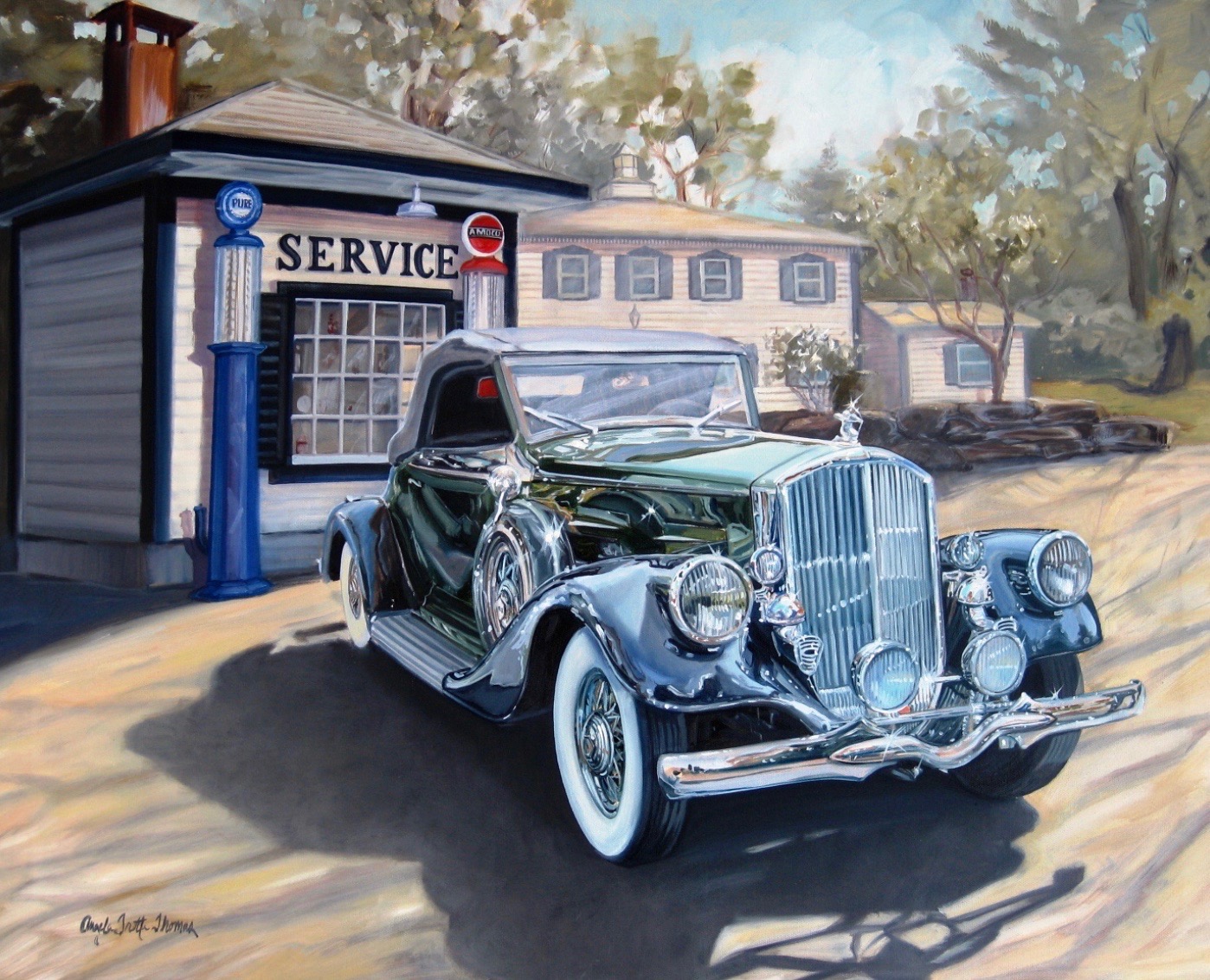 In addition to this, Angela works on commissioned works that require considerable effort, such as consecrating to eternity a particular moment of joy in the life of a child, or working through the use of simple photographs a painting that sees two children play: the grandfather, at an early age, taken from photographs and his nephew, or simply fix an image in time to be handed down from generation to generation, creating an emotional bond capable of arousing emotions and from which it is difficult to separate. The commission process is obviously long and requires approximately one year of work. There are numerous career awards: her works on the trains have been exhibited in important museums: the Smithsonian, the Everhart Museum in Scranton, Pennsylvania, and the Sardoni Gallery in Kings College in London. He participated with other American artists on a tour in Japan as part of a traveling exhibition of American art; her watercolors have also allowed her to be selected four times as an artist of the “Concours d’Elegance of the Eastern United States”, crowning her as the first woman to receive this honor.In 2000 she was selected to paint the cover of the catalog of the Centenary for Lionel LLC, which did not happen since 1969 and the Antique Automobile Club of America wanted to represent it, thanks to its elegant interpretation of cars, classic vintage cars: the Packard, the Pierce Arrow and the Cadillac Many of her paintings are in private and corporate collections, including Richard and Linda Kughn, Neil Young, Otis Chandler, MBNA Bank, Quest Health Care, Chrysler and Arrow Fastener Corporation to name a few.

A name and a surname that evoke distant Italian origins, betrayed by the distinctly American dialect but by the sweetness and warmth that are part of the DNA of the beautiful country and it’s nice to talk to her. It’s kind of like finding the right person in the right place.

So, whether you are a train collector or a mere lover of iconic images, excellently processed by the interaction of light, color and perspective, you can not let yourself not be carried away by the magic of Angela Trotta Thomas’s paintings and passionate, like a child they bring us back to childhood in the magic of time. 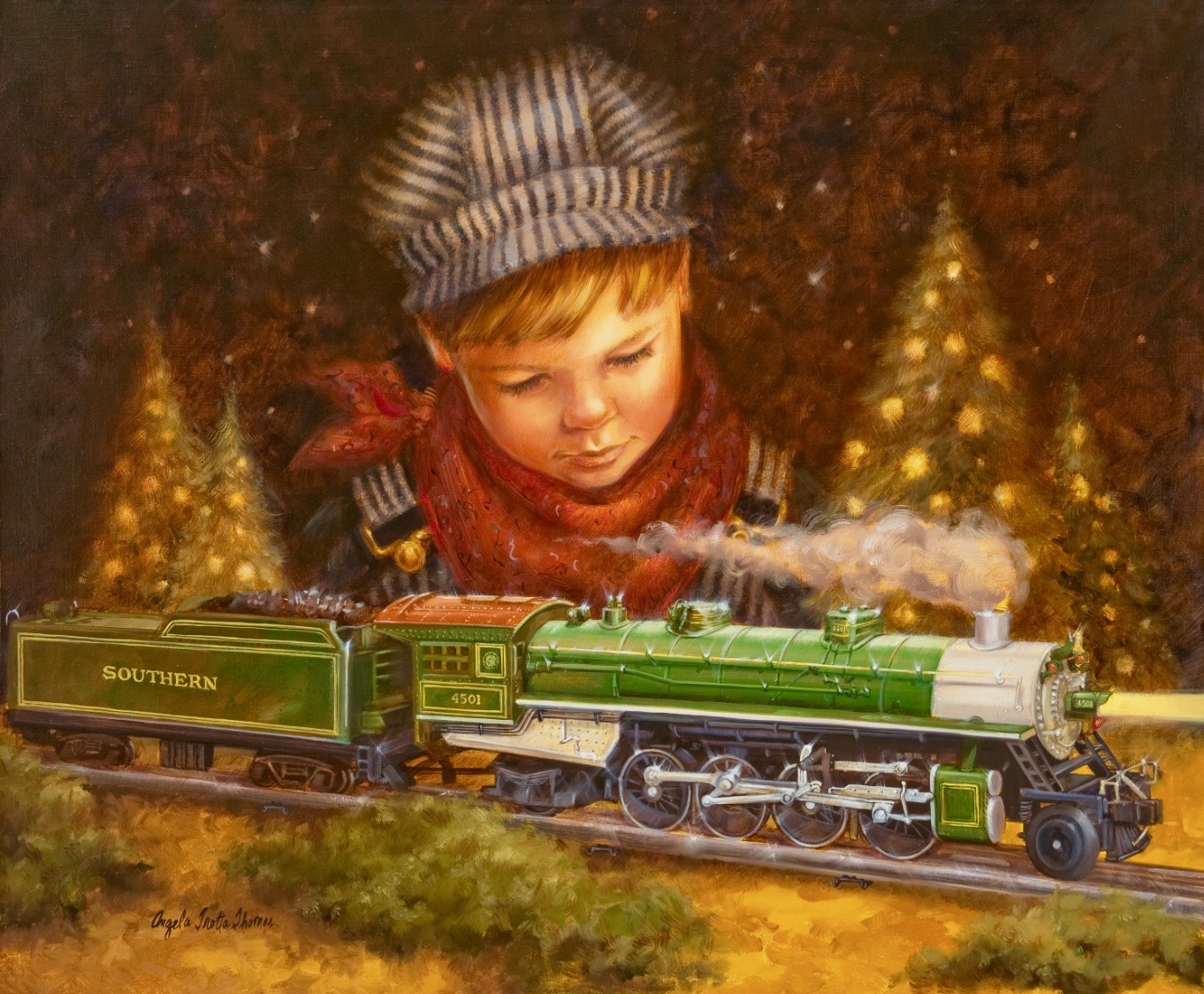 Last days to reserve your spot at Pastel Live for

(details of)Guest in the Garden by Bryan Larsen. O

The second exhibition opened on June 10 and is cur

Peter Trippi is a fascinating, curious and very kn