Under the banner of black and white: The Directed Art Modern Gallery in Miami inaugurates Μονόχρωμος (Monokhromos). 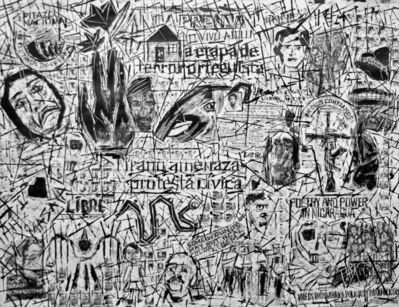 The Directed Art Modern (D.A.M) presented Μονόχρωμος (Monokhromos) the collective exhibition of B.L. Jesseph, Rob Anderson and Franck de las Mercedes. The monokhromos title refers to the fact that to highlight the universal messages contained in their works, the artists have chosen to create works in black, white (and their nuances) without using other colors that would inevitably have denatured the main element of the works: the contents. The result is that the works on display allow us to focus on truth and hope, on a personal and universal scale, represented in a pure way.

If Rob Anderson and Franck de las Mercedes also work with colors, B. L. Jesseph usually works in black and white, as they say: “Color sets limits, it distracts. If birth is in the black and death is entering the white-life seems to be the in-between-the grey. So I explore the boundaries of the black and white, asking questions and searching for answers while creating my artwork“. Their artistic technique is very interesting as it marries the technique of tattooing and fine art. In fact, through the use of extremely small needles, they literally etch the paper to create incredible effects from the almost textile rendering. So while the small pieces appear in the distance as a balanced play of geometries, they closely highlight the splendid elaboration of the plot of this refined and eccentric artist. After finishing their studies in North Carolina, Jesseph, in love with different cultures, ended up teaching English and Art in Beijing and Shanghai, China, where  they got a solo show in 2013, worked in a start-up company in Berlin, Germany where thanks to their roommate’s boyfriend they were given the opportunity to use a tattoo machine. Fascinated by the tattoo machine, they began to practice on friends and family, without an official tattooer license – as they like to emphasize; just to have fun and to barter for goods and services, unsure of the fact if becoming a tattoo artist was the right path. It is out of this curiosity that they tried to combine etching (a discipline studied in college) to the art of tattooing, using the needle on paper. After two years of research and analysis, B. L. finds themselves at The Directed Art Modern (D.A.M); without all the answers they would have liked to give, but still looking for the improvement of a technique that only they, at the moment, practice.

Both are from New York, both Franck de las Mercedes and Rob Anderson, both differently inspired by graffiti and the city but their approach is very different. The art of Franck de las Mercedes crosses the channels of his own life to highlight themes linked to childhood spent during the years of conflict in Nicaragua, with parents working on different fronts and who created a sense of precariousness in him. In his works he incorporates elements of photography, drawing and collage with which he creates frenetic works. In the wake of childhood and of the conflictual relationship (lived differently) with his parents, he creates his works as if they were a diptych between the past – the age of innocence – and the present – adulthood. The past and its dynamics are mixed with the present in a more or less subtle thread that highlights the variations of thought, ideas and ability to deal with the problems and sufferings of one’s own and others. Originally from Nicaragua, his works are exhibited in public and private galleries at the international level. He participated in The Fabergé Big Egg Hunt in New York, while in 2015 he was named one of the “15 About About Dominate Artists” by Complex magazine.

The dualism of de las Mercedes gives way to the works of Rob Anderson that inevitably bring to mind Keith Haring’s graffiti. In a very subjective way, however, Anderson represents the literal and metaphorical interconnections between architecture and life, objects, people and places that are not represented randomly but as perfectly fulfilling the truths according to which everything is connected. Growing up in Queens, New York City, his city inspired his art. Anderson finds his style at concerts and festivals, where he presents himself with paint and paper roll and for hours he is guided by the  music, by the crowd and by the sensations he feel at that moment, filling the canva. His whole art concept is in fact based on the sense of living the present, in its totality, with carefree. Architecture and traditions inspired him even during a trip to Hungary, with his family, in which he honors the figure of the shepherd: a role of utmost importance in Hungarian folklore. The pastor of Anderson is seen as the protector of art, holding a holy grail that represents it in all his power and danger, in fact he declares: “I decided to give him a holy-grail because it represents the importance that art has. It must be protected and like a precious sphere when it should fall and break, hell would happen ”.

With this exhibition on display until July 30,  the Directed Art Modern gallery  (D.A.M.). reconfirms its mission at the service of artists. Thanks to the thirty-year experience of its curator, the DAM intends to work in favor of the artists, removing art from the trends that want it for mere vanity, and rewarding the artists for their own creativity. Only by protecting them can artists be able to cultivate their art and vision, keeping them away from the concept of being a mean to do business.