Time for FACE, time to devote yourself to art in total divine grace and abandonment to the pure pleasure of art. 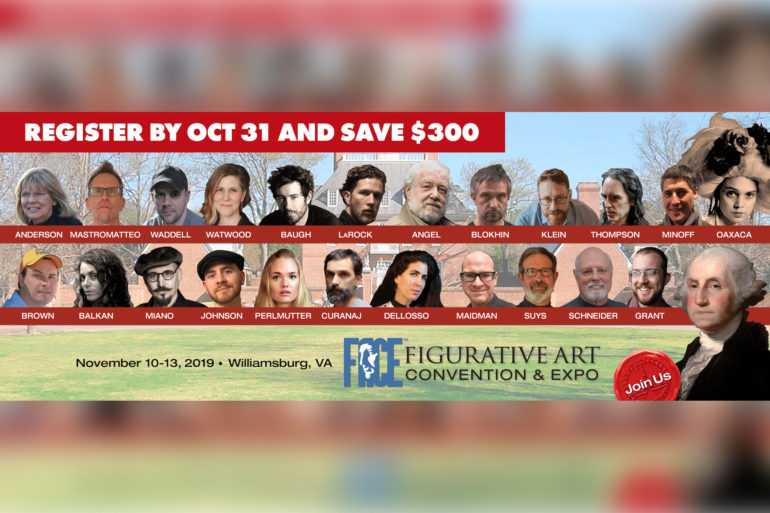 Following the success achieved in the second edition in Miami, in the splendid setting of the historic Biltmore Hotel in Coral Gables, FACE inaugurates the third edition of the event, from November 10th to 13th 2019, with a change of destination, as already mentioned last year: this time the headquarters will be the colonial Williamsburg, Virginia. Another exceptional location for what proves to be one of the most prestigious artistic events of Fine Arts during the year.

I came across FACE, almost by chance, last year, when in Chicago I had the chance to have a chat with my friend Angela Trotta Thomas, a great artist, official painter of Lionel trains and this year a member of the prestigious Salmangundi Club on the 5th in New York. Having her been at the first edition and having spoken so well about it, I decided to participate and cover it . The event which for its second year was held in Miami, a city that I must say, while hanging out in the art world was not able to exploit this great opportunity for famous artists, enthusiasts, scholars and collectors from all around the world.

I found myself at an event that went far beyond my expectations both for the large participation of the excellent artists and for the possibility that FACE offers to the participants: imagine yourself in the artistic workshops of the past (the merit is also in the wonderful locations chosen) and multiply the size by 14, as many as the daily events that take place in the different rooms used. At FACE there is the possibility to choose last minute which demo, workshop, panel discussions or reading to participate to and another factor not to be underestimated is the possibility to relate personally with the participating artists. Last but not least is the amount of information, tricks of the market and knowledge that is shared and transmitted. A great experience that led me to decide to follow the event even on the road, which is why this year as well, Miami Niche will be at the event and in addition to a sort of reportage, we will highlight some of the participating artists.

FACE is the acronym of Fine Art Convention & Expo, the great convention born from the idea of ​​Eric Rhoads, publisher and founder of Fine Art Connoisseur (and PleinAir) and Peter Trippi, chief editor of the magazine and for many years director and curator of several important museums, specializing in painting and European academic sculpture of the nineteenth century. A great love for art, theirs, which they have been able to bring together in this extraordinary initiative gathering artists, scholars, top experts in the art world, enthusiasts and collectors, including Steven Bennet and his wife Dr. Elaine Melotti Schmidt , founders of the Bennet Prize and one of the main sponsors of the event, in this sort of great artistic atelier that is FACE.

In the rooms of the Biltmore Hotel last year, forty-one artists of great caliber followed one another, all different in approach, technique and style of composition, yet all gathered under the great eye of FACE. Demonstrations, and workshops were held, both during the time of the convention and in the pre-convention courses, drawing live with models both in costume and nude, panel discussions and readings with the most important figurative artists of the world but also artistic marketing sessions , held by the authoritative Eric Rhoads writer of numerous books about it. Exceptional masters of the pre-convention workshops were Casey Bought and Robert Liberace and among the speakers were some big names such as: Burt Silverman, Daniel Sprick, David Kassan, and some important Miami artists: Caesar Santos and Milixa Morón, who recently opened the MIFA-Miami International Fine Arts school which the official inauguration, not to be missed, will be hold on November 21st.

In its third edition, FACE will be able to surprise in the same way: from the rooms of the historic Williamsburg Lodge as well as a roster of about forty artists, an exceptional guest (also available for a pre-convention course lasting two days, parallel to that held on the drawing by Daniel Maidman) will be the Master John Michael Angel, founder of the Angel Academy of Florence and master of Cesar Santos and MIlixa Morón. In addition to him, Charles Miano, founder and director of the Southern Atelier Center for Fine Art, in Sarasota and the restless revolutionary Casey Baugh, but there will also be Patricia Watwood, Gabriela Gonzalez Dellosso, Joshua LaRock, Toni Curanaj and many others, as well as ,of course, the founding fathers of FACE: Eric Rhoads, and Peter Trippi.

A full immersion among the greats of art who know how to show us how realism, combined with contemporary art, is able to amplify its beauty, inspiring the viewer who is totally fascinated by it. And this is basically the mission of FACE: to gather artists and enthusiasts who consider traditional painting the new modern art.

In addition to teaching, FACE will provide a store with which it will be possible to learn about the latest market news and buy at advantageous prices, even the materials used by the teachers.

An experience of total divine grace and abandonment to the pure pleasure of art not to be missed, perhaps taking advantage of the offer valid until October 31st, because even if the price of the convention is not the cheapest, believe me, on balance, it is a great source of resources that will repay the artist, the enthusiast and the collector who will be able to take home one of the works produced live.