Third day of Realism Live: the greatest artists of contemporary American Realism at the click of a button.

Third and final day of Realism Live, the convention dedicated solely to Realism in all its shades and genres. Conceived by Eric Rhoads, entrepreneur and founder of Streamline Publishing and Peter Trippi, editor-in-chief of Fine Art Connoisseur Magazine, Realism Live is a must-attend event for lovers of contemporary realism.

“Bonjour” and “Go paint” are the typical phrases with which Pierre Guidetti, inimitable face of Art Savoir Faire, begins and ends his enjoyable art sessions. In fact, every Friday Guidetti presents a live meeting or technical lesson with an artist on Art Savoir Faire’s Instagram page (@artsavoirfaire). Guidetti specified how: “Art Savoir Faire is not about commercial but it is about passion for art to share with the world”. In the pre-convention session, he presented some of the user materials needed for the drawing demo created by a character from another time: Michael Mentler. A great friend of Pierre Guidetti, the artist has been renamed the contemporary “Da Vinci”. Gifted with an uncommon knowledge and style, Mentler created the anatomical structure of a skull in the Renaissance style – a period that inspired his teaching and personal practice – using Cretacolor sanguine and Fabriano paper.

Before the official start of his demo Quang Ho showed his studio, specifying how learning and understanding how to “observe” is fundamental in art: “If you are able to understand that you will be free to paint”. Mentioning both past and present artists, including some friends -Dan Thompson and Daniel Sprick- Ho reflected on the concept of what is reality and realism. For the artist, realism is:”understanding the full vocabulary of art” which makes it possible to understand why, for example, Van Gogh’s art is different from that of Sargent. In the realization of the demo Ho emphasizes the importance of drawing -fundamental in the artistic process- that the artist defines as:” a set of shapes able to give a sense to the position of the images on the sheet”. In addition to this he argues that confidence and the ability to make decisions is necessary, without which an artist wanders in a vacuum. After representing the “crescendo” of the composition, rendered also through the positioning of the lights -and consequently of the shadows- he devotes himself to the realization of some details that make the painting simply poetic. Quang Ho states that: “even if you just learn one thing from each of the lecturers present at the convention, you have the opportunity to grow stylistically and artistically, because the artists’ participation in this convention is made to share their passion for art.”

“Throughout the years of joy and sorrow the one constant has been my love of art, the lifeline that has kept me moving forward), Susan Kuznitsky writes about herself. Award-winning artist and member -among many others- of the Portrait Society of America today she did a demonstration for Blick Art Materials with the theme: “How to make realistic skin tones”. Using alternating Sennelier soft pastels – her favorite – and Cretacolor, she executed a child’s portrait.

“You need to approach painting with a fresh eye: as if you’re seeing world for the first time,” says Morgan Weistling, who created a pastel portrait of a cowboy for Realism Live. Morgan Wrestling, who specializes in paintings of Western characters and scenes, which he does in both oil and pastel, was the winner of the coveted Prix de West at the National Cowboy and Western Heritage Museum in Oklahoma City. In sketching the drawing, the artist approaches it as if to “mark the territory” in the search for the relationships between the parts and continuously working on the transaction of colors and values. Fundamental relationships that must respect -even when, for example, the eyes are not perfectly aligned- proportions and the distinction between negative shapes and spaces, which are equally important. As a precocious artist, he began studying the father’s art books  who was a comic book enthusiast: a medium that literally saved his life during times of war. His dad’s characteristic of knowing how to tell stories with comics was a key element for the artist, who says: “To tell a story, it’s essential to focus on certain details”. After studying with Fred Fixler, a proponent of the mantra: “make the halftones lighter than they appear”, he worked for many years in the world of Hollywood illustration, from which he then moved away to devote himself to art in the more classical sense.

“Adrienne Stein’s ability to make colors harmonious is extraordinary,” her husband, artist Quang Ho, says of her. For her demonstration, Stein created a portrait of Josephine Baker, the famous performer who was also famous for her civil rights activism. The artist chose to start with a vintage black and white image from the 1920s. This factor allows her to be more “wild” in terms of creativity allowing her to work intuitively and creatively in inventing color. “The process is not simple because I have to think about inventive color as well as value at the same time! It takes a ton of practice and drawing from life”, said the artist. Starting with the organization of the rich color palette Stein builds the lights into becoming by first establishing the darks and then the midtones: “like pieces of a puzzle,” says the artist.

LPAPA -Laguna Plein Air Painters Association- is the Californian association dedicated to the preservation of plein air landscape painting. The motto of LPAPA is in fact: ”Celebrate the Legacy. Be Part of the Tradition!” A tradition, that of California’s first plein air movement, that has been perpetuated since 1903.

Jean Stern-Art Historian and Executive Director of The Irvine Museum Collection at the University of California-introduced participants to the meaning, history, and differentiation of the meaning of realism over time. Through an excursus of images – with examples from 1600 to the present day – Stern highlighted the great schools of thought (Dutch, French, Italian, and American) with their canons and particular characteristics. Speaking about contemporaneity, Stern underlined how it was a great honor to be able to attend an event like Realism Live that showed some of the greatest representatives of American contemporary realism.

Melodious music accompanies Jeff Legg’s still life demo that invites participants to enter his artistic world. The principle with which the artist proceeds in the realization of the work starts from an object that captures his attention and then he elaborates in a composition. Legg’s approach to composition, however, is not a crude representation of reality:  “It’s a jumping up play,” says the artist. In the still life performed for the demonstration Legg emphasizes the relationship between shapes, colors and values that he “adjusts” as needed, just as he reworks colors if he adds a new one. His is a constant search for harmony from which emerges, from left to right, the three-dimensionality of the final composition.

A leading figure in the contemporary classical art revival Jacob Collins is the co-founder of two art ateliers: the Water Street Atelier and, in collaboration with Dan Thompson, the Grand Central Atelier in New York City. Its purpose today is to recover the skills and spirit of classical art by educating young people, who find themselves unwittingly projected into a fallacious world that puts business before discipline. This is because, as the artist says: “today even contemplating garbage has become a style.” Jacob Collins is also the founding father of the Hudson River Fellowship whose purpose is to facilitate the building of a new movement in American art that is modeled on the artistic, social, and spiritual values of the Hudson River School painters. In his long lecture, the artist states that he is an ardent supporter of realism, which he believes is fundamental to the faithful representation of social and political dynamics in the world. He was also one of the first artists with whom E.Rhoads and P.Trippi came into contact during the founding period of Fine Art Connoisseur Magazine. Heir to an important artistic tradition, Collins remained faithful to his style despite being born in a city -New York City- that snubbed realism, considered out of date in a context devoted to Pop Art and graffiti art. Yet his style has managed to make a breach in the hearts of the large group of collectors who have always bought his works. For the occasion he gave a lecture entitled: “Insights on Realism”, in which he made an analysis of realism over time, with its innovations, its developments and also its downfalls. The artist argues that the invention of the darkroom and the development of photographic technique – and its connections today unfortunately a bit in decline – have facilitated the process of creation.

Kevin Macpherson considers himself a realist artist to all intents and purposes even if his representation of nature could lean towards impressionism. After all, as the artist says, realism has a wide spectrum of development. For the occasion he has chosen to make a live image that allows him to be inserted into the harmonious context of the vegetation that he paints following roughly the principles of the golden section. According to Macpherson:” The beauty of plein air is that it allows you to communicate with nature, and the use of thicker color helps to render this concept on the canvas.”The scene depicted-a tree trunk he works on with a limited palette-is seemingly far removed from the rest of the lush nature in which he is immersed. The reason he chose this scene is because he wants to highlight the relationships between the slice of nature depicted and the surrounding landscape, that interact with each other in an absolutely harmonious way. 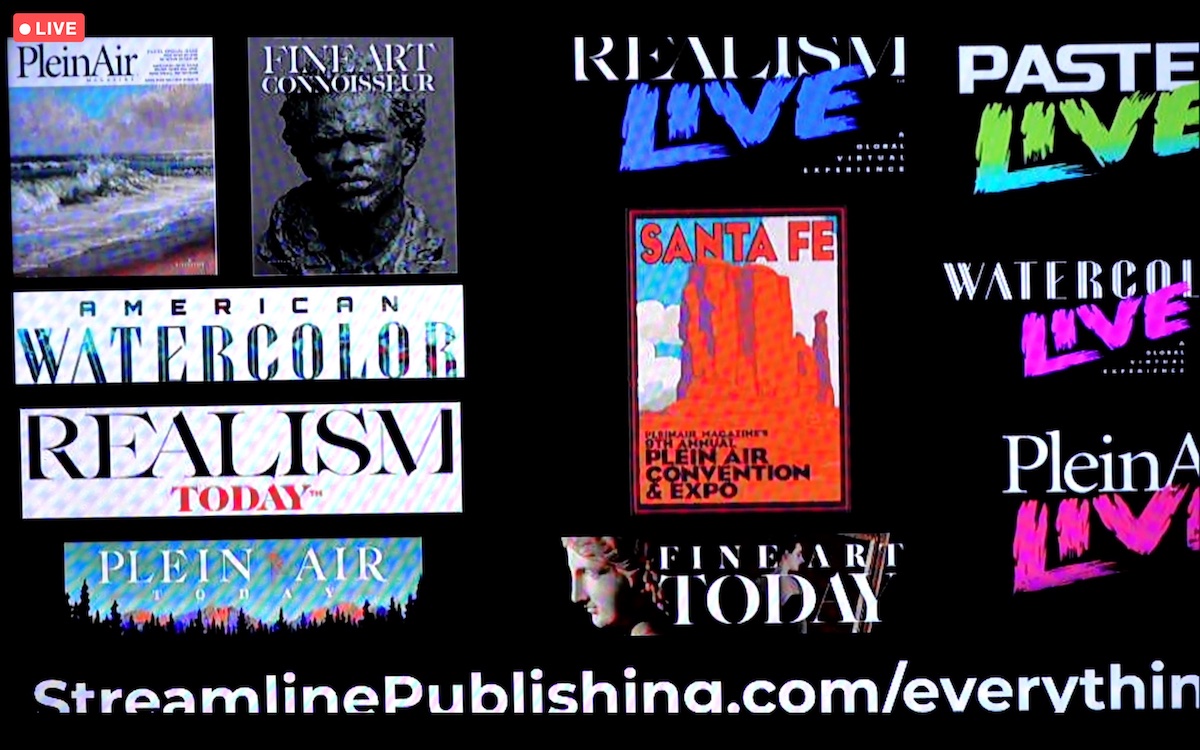 The second edition of Realism Live has come to the end amidst the enthusiasm of the participants. Those of you who wish to experience the emotions of these days, can buy the recordings of both the Beginner Day and the official conference by clicking on the link: https://realismlive.com/2021-register-now. Eric Rhoads, as always supported by his incredible crew, also announced the dates of the next meetings scheduled for 2022 and they will be in temporal order: Watercolor Live from Jan. 26th to 29th (https://watercolorlive.com/tickets/), Plein Air Live from March 10th to 12th (https://pleinairlive.com/2022-register), Pastel Live from Aug. 18th to 20th (https://pastellive.com/2022-tickets), and the third edition of Realism Live, from Nov. 9th to 12th. Beginner Day will also be available for each date. About this edition says a participant at the close of the event: “All set for W/C Live, Plein Air Live, Pastel Live and now Realism Live. I live on social security but these conferences are good for my mind and my spirit so worth every penny. Thank you Eric Rhoads! What better satisfaction than these heartwarming words.


Jesse Lane, The Colored Pencil artist, will be am

Teresa Oaxaca will be among the teaching artists i

(…)“What drove me to become an artist is that

Steward White, will be among the teaching artists

Back this year, for the second year in a row, Real

"The Homes We Make" by Sara Gallagher. Graphite an

Quang Ho, will be among the teaching artists in th

EN-Just a few hours to sign up for Watercolor Live

Venezuelan artist Ramiro Sanchez, will be among th

Third and final day of Fall Portrait Academy, the