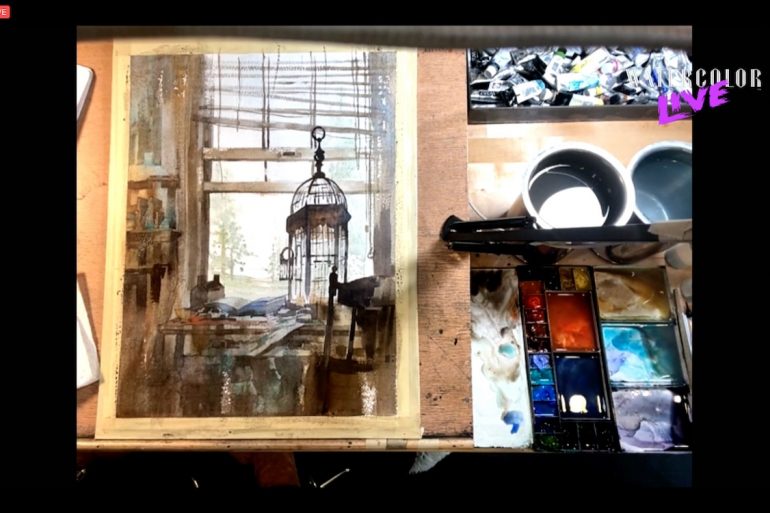 Cindy Baron, is the artist and teacher, who officially opened the third day of Watercolor live. Baron is internationally known for painting large landscapes and for the demo she created an evocative mountain landscape at dawn. The artist pointed out that she always makes a preparatory sketch with a preliminary study of values before starting to paint. “A necessary step in the successful finishing of the painting,” said the artist.

Cindy Baron’s technique in approaching watercolor was -for the umpteenth time- different than any we’ve seen before. Baron created the background with the three primary colors that she applied with brush strokes. She then generously wet the paper with water spray, which helped her blend the colors naturally.”It’s a key process to capture the ambiance of the environment and to achieve the soft edges,” said the artist who recommended using a 300mg paper that can support heavy water use.

This technique allows her to deliberately not be too realistic, emphasizing instead her personal vision in the realization of the landscape. She helped herself with a brush in classic fashion to make hard edges and with a cloth that she rubbed on the paper to define the perspective until the shapes emerged. It was very interesting to see the final touch, the haze of the mountain in the morning, which Baron made with a light veil of gouache mixed with watercolor colors sprayed by rubbing her fingernail on the brush’s palette knife.

“The best part of painting…is painting!” said Poxon, British artist appreciated above all for the precision and mastery with which he creates his paintings. In the still life demo he represented one of his favorite subjects: a glimpse of a wall with an old window. To understand Poxon’s approach to watercolor, it is necessary to understand the artist’s regard for the objects he represents about which he says, “It takes respect to approach these beautiful, time-forgotten objects that can be over 100 years old.” This factor also greatly affects the timing of the realization of the painting that requires, most of the time, weeks in its completion because the artist prefers to let the various layers dry naturally. In order to capture the illusion of time, Poxon works a lot on the texture of the sheet, preferring to flat layering a work composed of rigorous brush strokes arranged randomly on several layers to which he alternates splashes of color that he recreates with the bristles of the brush. In addition to alternating the brushstrokes, he also alternated the consistency of the color: light in the first layers and dense at the end of the more detailed work. Despite the technique suggests otherwise Poxon reiterates the importance of accuracy in the implementation of details. Features that are not trivial and require a lot of patience, but, as the artist says: “patience is a virtue!”

In this second edition of Watercolor Live there were many interesting ideas due to the techniques proposed that showed how watercolor is an absolutely exceptional technique. Among the most curious demonstrations of the day there was Laurie Goldstein Warren’s demo. The artist presented an innovative technique based essentially on the use of a mask, vaguely reminiscent of the approach of street artists with stencils. She began by applying the mask over the entire face – leaving out the darker details – and proceeded from darker to lighter values. At each step she removed the mask from the affected sections, which she painted respecting the tonal values of the image, previously turned to black and white and represented on the sheet. In removing the last remnants of the mask she refined the details with a brush. It was innovative to see how she spread the saturated colors in a completely abstracted manner making use of Pasteur pipettes. Another feature of Goldstein-Warren’s work is that she did not attach the sheet to the rigid support so as to let the color move completely randomly across the sheet. In using the mask, she also emphasized how important it is to use your fingers to remove it in order to avoid damaging the sheet.

Goldstein’s demonstration was so exciting that the audience requested a more abstract approach when choosing the faculty for the third edition of Watercolor Live.

Another important element to treasure at events is seeing how artists organize their materials. Among the various artists at Watercolor Live, the most innovative was definitely Carrie Waller, who “squeezed” half of her tubes into convenient beading craft containers, cleverly coded on the bottom so she could recognize the trade name. The artist cleared out another common object: the cosmetic brush, a tool she eventually used to paint the background with indigo and sepia. Among the tips the artist unveiled is that of color coding on a sheet of paper so as to establish the reference shade simply by juxtaposing it with the photographic image. Carrie Waller, who currently resides in Tokyo, created a still life demonstration in which she reproduced a familiar subject, the protagonist of the “Lightbulbs series”: glass bulbs. She recreated a pleasant composition of three blue bulbs that, after a photography and post production session, she reproduced on the sheet. In the execution of the painting Waller, contrary to what could be imagined by observing the image, started from the dark colors of the subjects in order to establish, immediately, the tonal value of the composition. In this regard, she emphasized the importance of maintaining the same family of tonal colors in order to make the composition harmonious, in which she created the round forms with long, sweeping movements.

The last protagonist of the second edition of Watercolor Live was Thomas Schaller, one of the founding members of the North American Watercolor Artists. His demonstration was a sort of artistic reflection: a meditation on the meaning of art and why to practice it.

With a background as an architect, Schaller decided to work as a full-time artist in 2008, after the financial crisis. While being an architect fostered his technical skill in representation, it also led him to question what, on a human level, he had to say for himself. He then came, over time, to reshape the conception of the artist by embracing a statement by artist Chuck Close, who said, “Inspiration is for amateurs – the rest of us just move on and get to work.” A quote that completely twists the romantic canons of the idea of the artist, constantly searching for inspiration, because according to Schaller : “A good artist is able to paint wherever he is.”

In his practical demonstration, he started from a photographic image of an old birdcage to create an imaginary background. A job, that of representing imaginary landscapes, that the artist says he has always done throughout his life: both in moments of anger and sadness and in moments of joy. According to Schaller, to find the motivation that drives an artist to paint, one simply needs to get out and observe nature and be inspired by the world of opposites, in equal measure: exploring value contrasts, vertical and horizontal lines, and a sense of freedom and constraint. “They are all forms of inspirational energy from which comes a way of painting that is neither right nor wrong but is very personal.”

Several were the sponsors of the convention who, today as in the other days, dispensed advice on materials but not only. Among them, Pierre Guidetti, unique character and face of Savoir Faire.

Guidetti possesses an impressive cultural caliber and it is no coincidence that he has been called an “Art Suppliers Historian” by the academic institutions that seek his advice.

“Pierre Guidetti’s energy bring me alive,” Tish de la Bretonne has said of him in recent days, referring to the enthusiasm that characterizes his demonstration sessions. Guidetti is, among others, ambassador and representative for America of Sennelier, Fabriano and Cretacolor. All historic brands that have stood the test of time for the quality of their products. During the presentation session, the artist preferred to answer questions from the public, which were many and addressed several issues that emerged during these days: the use of honey in watercolor paints – which links the Sennelier company to the French Impressionist masters; the importance of using quality materials even for beginners – and for which Sennelier has developed the line: La Petite Aquarelle Watercolor; the difference between the different types of paper on the market – hot-pressed, cold-pressed, white or extra-white – of which Fabriano, Italy, is the absolute leader in terms of quality, workmanship and innovation. Guidetti maintains that watercolor is the perfect technique to approach art. The reason is due to the simplicity of the technique, which requires only a lot of water, pigment and a support on which it is sufficient to paint with two brushes: one round and one flat. There are several artists, and friends, who have made practical demonstrations using the excellent materials she proposes, among them: Keiko Tanabe. If you want to receive information and technical and practical advice, we recommend that you follow Pierre Guidetti on his Instagram page (@artsavoirfaire).

Blick Art and Materials was among the Platinum Sponsors of the event for which it made several demonstrations attended by the refined Sarah Simon, artist and author of books carefully made with watercolor paper. A useful way to practice directly on the book, on sale in the shop of Blick Art and Materials.

Finally, Joe Miller, founder and face of Cheap Joe’s Stuff Material. An extraordinary character who told his story at Watercolor Live, starting from when he was a pharmacist to when, as a humble watercolor enthusiast, he decided to dedicate himself to art, opening one of the most successful art supply companies in America.

The second edition of Watercolor Live has come to an end with the nomination of the winner of the “post your image with the Watercolor Live background and hashtag #watercolorlive” contest, to whom $500 was awarded.  To all artists, enthusiasts and those who wish to learn new techniques in a concrete way, Eric Rhoads and the Streamline Publishing team remind you that you can relive the excitement of these days by attending the third edition of Plein Air Live, from March 9th to 12th, 2022 (with an optional beginner’s day on the 8th).