The XXII edition of the Portrait Society of America Convention gets underway. 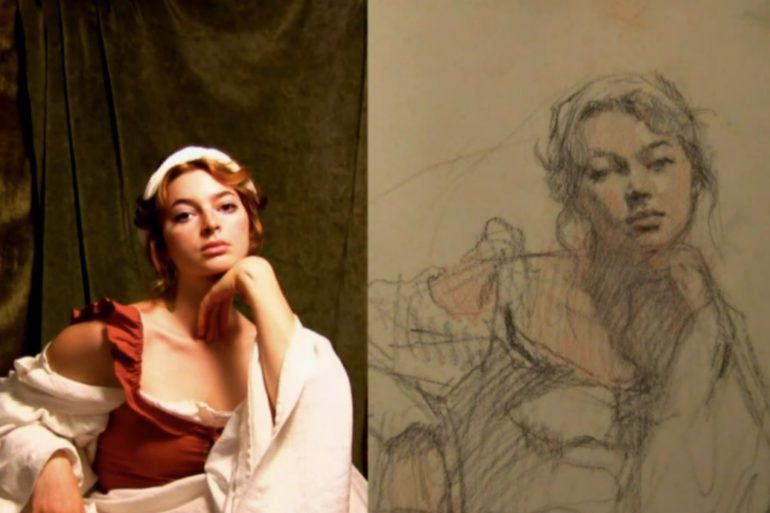 The XXII edition of the Portrait Society officially began with a live lecture given by the artist-poet Robert Liberace who, as promised, entertained the public with his teachings for a good cause: the proceeds of the registration fee ($10.00) went entirely to the Edward Jonas Memorial Fund.

Edward Jonas, co-founder and president of the Portrait Society of America, an internationally renowned sculptor and portraitist, died in June of this year following a bad fall, leaving a great void in the people who knew him and therefore decided to bring his memory through the institution of the Edward Jonas Memorial Found.

The Edward Jonas Memorial Found consists of the distribution of scholarships to be dedicated to virtuous and needy students. Famous is his philosophy and life practice which also summarizes his active participation in the Portrait Society of America:“While abstract art speaks to the artist, realistic art speaks to the world.”

Robert Liberace, gave, as usual, the best of himself in the realization of the workshop: demonstration of the realization of a half-bust portrait with charcoal, pastel Conté white and sanguigne. A demonstration that was divided into several steps starting from the basics of drawing and proportions in general through dynamic, “vibrant” lines, and then continue the work by dividing it into segments.

Robert Liberace has not, as usual, spared himself on practical advice, techniques, notions of artistic and cultural anatomy that have ranged from the techniques of the greats such as Charles Bargue, J.S.Sargent, Rubens, Mariano Fortuny, Leonardo da Vinci and many others.

Exceptional model for the event was the beautiful daughter, and artist with a capital “A”, Celia Liberace, because as they say in Italy: “ Good blood does not lie”. Celia was recently awarded the ARC Award for the Da Vinci Initiative Category for young talent.

The Edward Jonas Memorial Found initiative has reached over 1400 people who have connected virtually from around the world. Special thanks in setting up the workshop should also be given to Liberace’s wife, Lina and the daughter Ava, who participated, working backstage on this important project.

The day continued with Mary White, one of the founding members of the Portrait Society of America who unveiled the names of the three winning artists of the Self Portrait Project. Standing ovation therefore for: Coulter Prehm, from New Mexico, who came first, followed by Ronilo Abayan, from the Philippines, and Sharif Sadiq, from New York.

Mary White also talked about her great project set up entirely on the quiet, which brought her to meet people all over America and experience that if it weren’t for art she would never have experienced. Her big project entitled “We the People: Portraits of Veterans of America” has been set up in 7 years of constant and assiduous work and consists of 50 large watercolors – one for each state of America-, representing one veteran for each state.

People who have honored their homeland and in return have received treatment that is not entirely commensurate with the honors they were due: completely abandoned by institutions, a high percentage of American veterans, suffer major post-traumatic depression that leads them to give up their lives, becoming homeless or even commit suicide. Mary White established the Patriot Art Foundation in 2019: through this project she wants to help veterans get back on their feet and get their lives back on track. Her extraordinary watercolors are currently on display in Ohio and will make stops in other states of America including Alabama and Washington, D.C. For information about the exhibition visit the website: www.marywhyte.com.

The day ended with a long and pleasant interview -which I would define more a talk between artists- in which Michelle Dunaway interviewed John Coleman. Neither one of them, in the artistic environment, needs an introduction, but being the readers coming from different parts of Europe, I think it is necessary to make a small clarification about this, since not everyone is aware of what is the brilliant American art scene.

Michelle Dunaway is a great painter of international renown who has also received numerous awards and recognition from the Portrait Society of America and the ARC, Art Renewal Center. Passionate about all artistic genres, however, her great love remains the portrait. Among the various works, worthy of note, is the portrait made to Richard Schmidt, her mentor and great and renowned artistic figure recognized above all for the skill of painting “Alla Prima”. Michelle Dunaway was impressed by Coleman’s work even before she became an artist: she remembers many years before when, during the years of high school, she found herself admiring one of his sculptures in Santa Fe, being impressed by it.  Now that the two of them have known each other for a long time, it is really exciting to see them interact with the sense of what was and what is, finding themselves – in videoconference – in front of each other.

John Coleman is one of the most authoritative contemporary western sculptors. Coleman is a member of the National Sculpture, since 1999 he has been a member of the National Sculpture Society of New York and since 2001 of the Cowboy Artist of America. Originally from California, he studied at the Art Center for Design in Los Angeles and has been sculpting full time since 1994. Kidnapped by Bernini’s Rape of Proserpine, in particular Pluto’s fingers that seem to enter the marble thigh of Proserpine, as if it were flesh, John Coleman makes of his bronze sculptures true masterpieces capable of bringing out all the dynamism and movement even though it is a sculptural work.

No less important are his charcoal and oil works in which he represents the culture of the natives of America with whom he has established a relationship of mutual esteem and respect and from which he has had much to learn. His works are a hymn to the woman who, according to Coleman, plays a fundamental role in society, whatever she may be, and who is therefore represented with strength, dignity and the vital power for which she was created. Coleman argues that it is not by chance that the woman lives more than men because the woman has the task of carrying on the family and life”. In his eulogy to the strength of the woman he also recalls the strength of the mother and adds: “Women have a different “kind of wings” than men don’t have”. In his works there is no lack of mythological references that in the wake of the spirit and life of Native Americans allow to connect nature and spirit.

Coleman maintains that there is a sort of “universal morality” that unites us all. He has a personal vision of art for which he never chooses a particular subject but lets the viewer interpret the character according to his own experience: this is what makes art great and this is why we admire the characters who have made art history over time. Coleman argues that people should possess a common vocabulary and language that not everyone unfortunately possesses, and this is what makes it possible to distinguish an artist who does not compose by quantifying the time taken to create a work, from the artist who wants to make a fuss or simply astonish. Art has a precise vocabulary that, if you are lucky enough to know, allows us to connect with each other like the notes of Mozart’s music played on the piano.

Stay connected with Miami Niche: today’s will be another rich and exciting day with new artists and interesting lectures.

(from the title: Worldwide Drawing the Figure with Robert Liberace. Celia Liberace model).