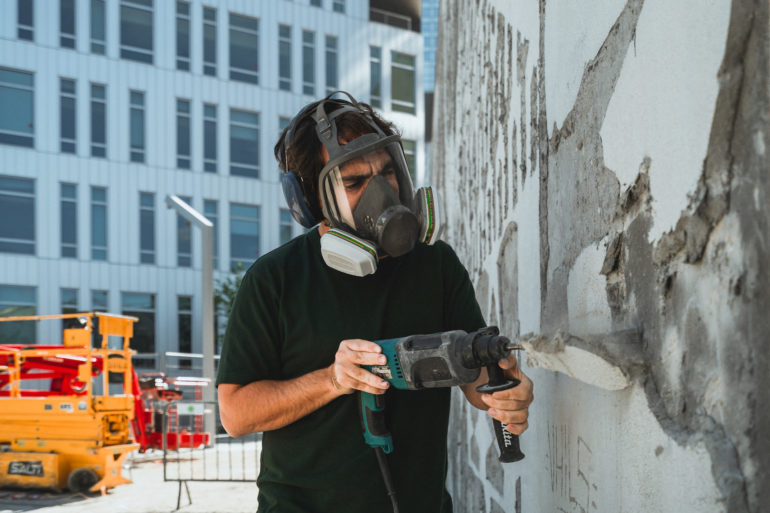 Strongly influenced by the urban development of his country – Portugal – during the 80s and 90s, Alexander Farto, is known in the environment with the AKA of VHILS. The artist developed a new way of doing street art based on the technique of bas-relief sculpture: a show and a revolution in the world of street art. An artist originally from the suburbs of Lisbon, Farto developed the project “Scratching the Surface”, first presented to the public at the VSP group show in Lisbon in 2007 and at the Cans Festival in London 2008.

The Farto’s technique consists in working the walls eroding the more or less superficial layers through the use of the jackhammer and the hammer and chisel. The technique has proved a success and has been acclaimed as one of the most convincing and innovative approaches to street art. Farto’s art is not an improvised art, however, but is the result of his studies, and undoubtedly the creativity and mental flexibility of the artist, who, having studied at the Byam Shaw School of Art in London, has applied the classic technique of engraving by modifying the medium. He experimented with many different mediums including polystyrene, plexiglass and metal.

In 2018, the GGA -Goldman Global Artist- inaugurated the walls of Miami’s Wynwood Wall, making them truly enchanting, and this year to celebrate 10 years of its foundation, he participated with some works for sale in an exhibition together with some of Wynwood’s most famous artists. Wynwood, the artistic district of Miami, is the indisputable result of gentrification, but it has also brought many good things for the city of Florida. The visionary innovator was, some years ago the late Tony Goldman, who also changed the fortunes of Soho in New York. Now the project is in the hands of his daughter who is carrying it out successfully.

The art of VHILS through the physical erosion of walls reveals the cultural uniqueness of a place in the face of the dominant model of globalized development that is imposing itself all over the world.  His murals take on the meaning of a reflection on life in contemporary urban societies: in the struggle between the aspirations of the individual and his needs in everyday life. VHILS’ original method of “creative destruction” digs into the superficial layers of our material culture like an archaeologist, revealing what lies beyond the superficiality of things, making the invisible visible.

Since 2005, he has presented his work in over 30 countries around the world in solo and group exhibitions, making site-specific art interventions (including community work in the favelas of Rio de Janeiro) and collaborating with some of the important art institutions including: the Centre Pompidou in Paris, the Barbican Centre in London. The artist has also produced a book, in which his personal story is told through his works. The book is a work of art itself that can be hung on the wall. The title, Pentimenti, is borrowed from the pictorial sphere, where the meaning “pentimento” indicates a visible trace of previous painting under one or more layers of paint on a canvas, and encompasses all of Alexander Farto’s artistic vision.