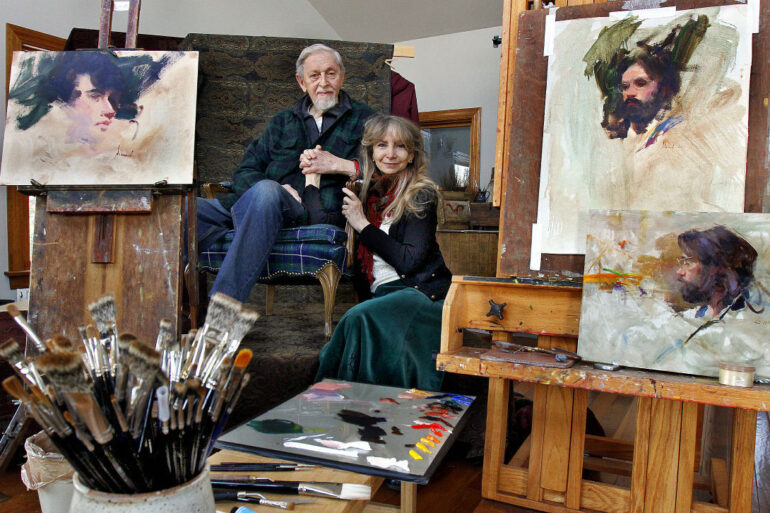 It’s been almost a year since Michelle Dunaway, pupil of Richard Schmid brilliantly interviewed -virtually, given the pandemic times- him and his wife, the beloved artist Nancy Guzik during the 22nd annual seminar of The Portrait Society of America. This year’s 23nd edition is just over a month away, yet a shadow has been creeping over the world of contemporary American realistic art since Sunday, April 18. In fact, Richard Schmid, considered by his disciples:”The savior of representational art in America”, has left, surrounded by his dearest affections.

Born in Chicago, IL, on October 5, 1934, Richard Schmid has distinguished himself as one of America’s greatest contemporary painters. After an approach -which was love at first sight- experienced at an early age with his grandfather, he entered the American Academy of Art at the age of 18 and studied under William Mosby, technical expert of European and American realism. He has participated in dozens of exhibitions, winning countless awards and honors including the Portrait Society Gold Medal, the Salmagundi Club Medal of Honor, the American Watercolor Gold Medal, and an Honorary Doctorate from Lyme Academy. In 2000, Richard Ormond, Sargent’s great-grandson, awarded him the John Singer Sargent Lifetime Achievement Medal.

He was a painter, writer, teacher and mentor. Among his most influential books, his landmark book, considered the finest instructional art book in the world: ‘ALLA PRIMA. Everything I Know About Painting”, in which, in addition to imparting all his artistic knowledge, he leaves us the mantra on which he based his entire existence: “Somewhere within all of us there is a wordless center, a part of us that hopes to be immortal in some way, a part that has remained unchanged since we were children, the source of our strength and compassion. This faint confluence of the tangible and the spiritual is where Art come from. It has no limits, and once you tap into it you will realize what truly rich choices you have. May each painting you do from that sacred place include an expression of gratitude for the extraordinary privilege of being an artist”.

Those who knew him rest assured that, as his daughter Molly states: “My father’s life-long love affair with Art will live on thanks to his paintings, writing, and teaching. These are the gifts he has given us. Together, we as a community can honor his mission to make the world a better place through Art by keeping his legacy alive”. So, if: ”Art happens in the mind of the person seeing them”, as Schmid says, let this shadow fade richly in grace and on the wave of its teachings, not least the pearl of wisdom with which he closed last year’s interview: “One day all this marasmus that afflicts the world will end but the art will remain and the artist’s task is to create the world he wants”.  ”Be well and keep painting. Your friend Richard”.

The Portrait Society of America is excited to anno

Untitled by Maurizio Cattelan, 2017. Cattelan is

INSPIRE- TEACH-CONNECT are the three themes for th