The Wolfsonian-FIU celebrates the Cuban modernism of Conrado Walter Massaguer. 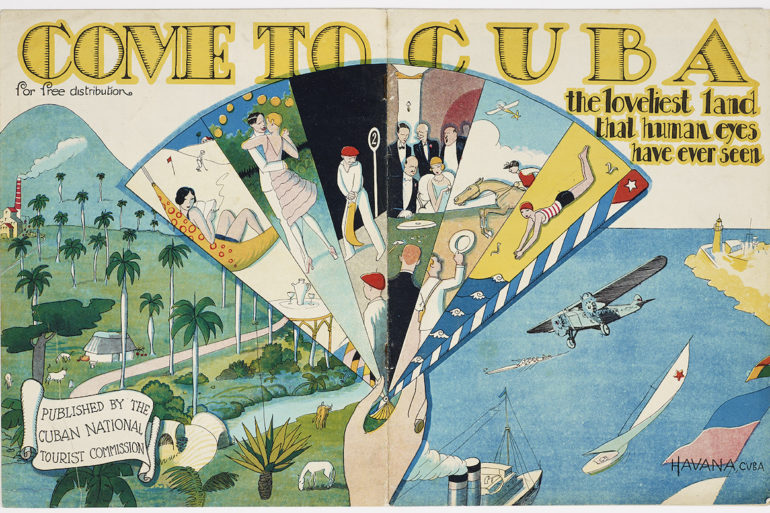 In celebration of the summer, almost here, the Wolfsonian-FIU of Miami Beach presented, The New Tropicana (in collaboration with The New Tropic), a party based on Cuban music, dances and flavors. The occasion was organized to celebrate the opening of the exhibition Cuban Caricature and Culture: The Art of Massaguer composed of works from the Wolfsonian collection to which the works donated by Vicki Gold Levi were added, historian, photo curator and writer who published Cuba Style and Promising Paradise: Cuban Allure, American Seduction.

The exhibition, curated by Frank Luca and on show from June 8, 2019 to February 2, 2020, exhibits about a hundred works that cover over forty years of career, including: original paintings, rare sketches, magazine covers, advertising posters, personal letters, caricatures and a child wooden rocking chair, given to Mana Zucca (a music child prodigy) who represents the caricature of her husband, Irwin M. Cassel.

The venerable Cuban illustrator must be given the importance he deserves, that means  introduction transcultural of modernism in Cuba pre-Castro. Massaguer was an illustrator, graphic designer, publisher and a caricaturist. Wolfsonian director Tim Rogers said about the exhibition: “Sharing Massaguer’s story right here in Miami, the door to Latin America, is extraordinarily fitting.”

Born in Cardenas, Matanzas, Cuba, in 1889, Conrado Walter Massaguer studied in the United States, Mexico and Cuba, then commuting between New York and Havana, building both his artistic career and his art director career. Back in Cuba, he started the publication of two of the most important magazines in Cuban history: Social, for an elite audience, and Carteles, for a popular audience. His magazines have fostered the careers of many Cuban illustrators and caricaturists.

During the presidency of Gerardo Machado he lived as an exile in New York and in Europe, suspending the publications of his magazines to collaborate as an illustrator for the most important international magazines: Vanity Fair, Collier’s, Cosmopolitan, Life, Le Figaro, The New Yorker and Literary Digest. At the end of Machado’s presidential period he returned to Cuba with an important cultural background that made him a famous trend-setter in the Cuban landscape.

Conrado W. Massaguer is credited with having used illustration as a means of re-evaluating the figure of the Cuban woman as well as boosting and stimulating  tourism to the island. The woman of Massaguer was called Massa-Girl, because of her hair brought to bob, and she had assumed in her illustrations an aura of sensuality and libertinism accompanied by a sumptuous Art Deco outline that distinguished her from the traditions.

Regarding his country, Massaguer was a firm believer in the fact that: “The tourism, if well cultivated, could become Cuba’s most important harvest and could steal the scepter from the sugar cane”. He had therefore contributed to making the image of Cuba the equivalent of a prestigious tropical paradise which over time became a favored destination for leading figures on the international scene. He persisted in his intent even after the fate of the island was defined differently, to the point that he created a mural for the World’s Fair of New York in 1936. His social and advantaged position, also offered him the opportunity to represent famous people such as Hollywood stars, sovereigns and presidents, punctually caricatured by Masseguer with his witty New York style. With simple and clean lines, he was able to keep modern with the passing of the years precisely because he had no frills, fresh and imaginative despite being dated (1920-1950). Among the many characters he represented with his “choteo” (the term caricature in Cuban which literally translates as “joking around”) were: John D. Rookfeller, Theodore Roosvelt, Alfonso XIII of Spain, José Pepe Gómez de la Garriga, the chess champion José Raoul de Capoblanca and many others.

Among Massaguer sagacious illustrations appear that of Franklyn Delano Roosevelt, to whose ideas for fighting the Great Depression he was sympathetic; a caricature of himself ready to land in the limelight of New York; the illustration published on Social in December 1937 in which the three Magi replaced the figure of the three military leaders of the Axis group, (Adolf Hitler, Benito Mussolini, and Emperor Hirohito) accompanied by the ironic inscription: “And peace on earth to men of good will”; a sketch of Walt Disney depicted with an accentuated nose; an advertising image of Cuba as “The loveliest land that human eyes have ever seen“; a Christmas advertising image for Him, made in the aftermath of the victory of the Allies in the Second World War, with caricatures of Joseph Stalin, Winston Churchill, Franklin D. Roosevelt, Charles de Gaulle, Chiang Kai-shek and Santa Claus.

Cunning and finesse for a great illustrator who has known all the essence of the subjects and of the history from the thin line.