The warn comeback in presence at the 24th annual “The Art of The Portrait Conference,” organized by the Portrait Society of America. 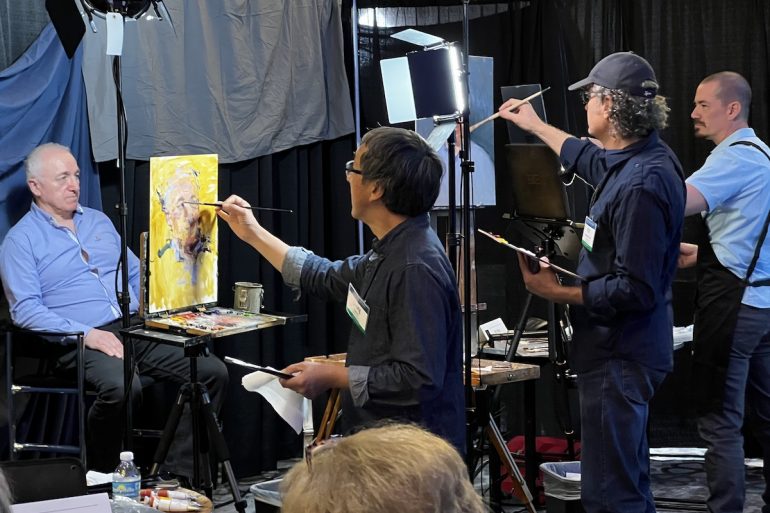 Miami Niche landed in Atlanta for The Art of The Portrait, the annual event organized by The Portrait Society of America, this year back in presence.

Welcoming the audience on its first day of pre-event classes were not only a host of artists who are faculty members of the prestigious institution, but there was above all the beauty and joy of human warmth. It’s exciting to be able to hug each other again, and to be able to talk to each other while looking into each other’s eyes. Sculptor Alicia Ponzio, a faculty member in the first virtual edition of the event, had  mentioned that:  “No virtual event can replace the grandeur of The Art of The Portrait, in person. It is unique.” And this edition is proof of that.

It is curious and fascinating to know that the members of the society through volunteering take care of the entire management of the event, in all respects and in the best possible way.

On the “unofficial” day of the event, which opened with different pre-conference workshops, there were four artists who participated in as many separate workshops: Louis Carr, Michelle Dunaway, Robert Liberace and Gregory Mortenson. 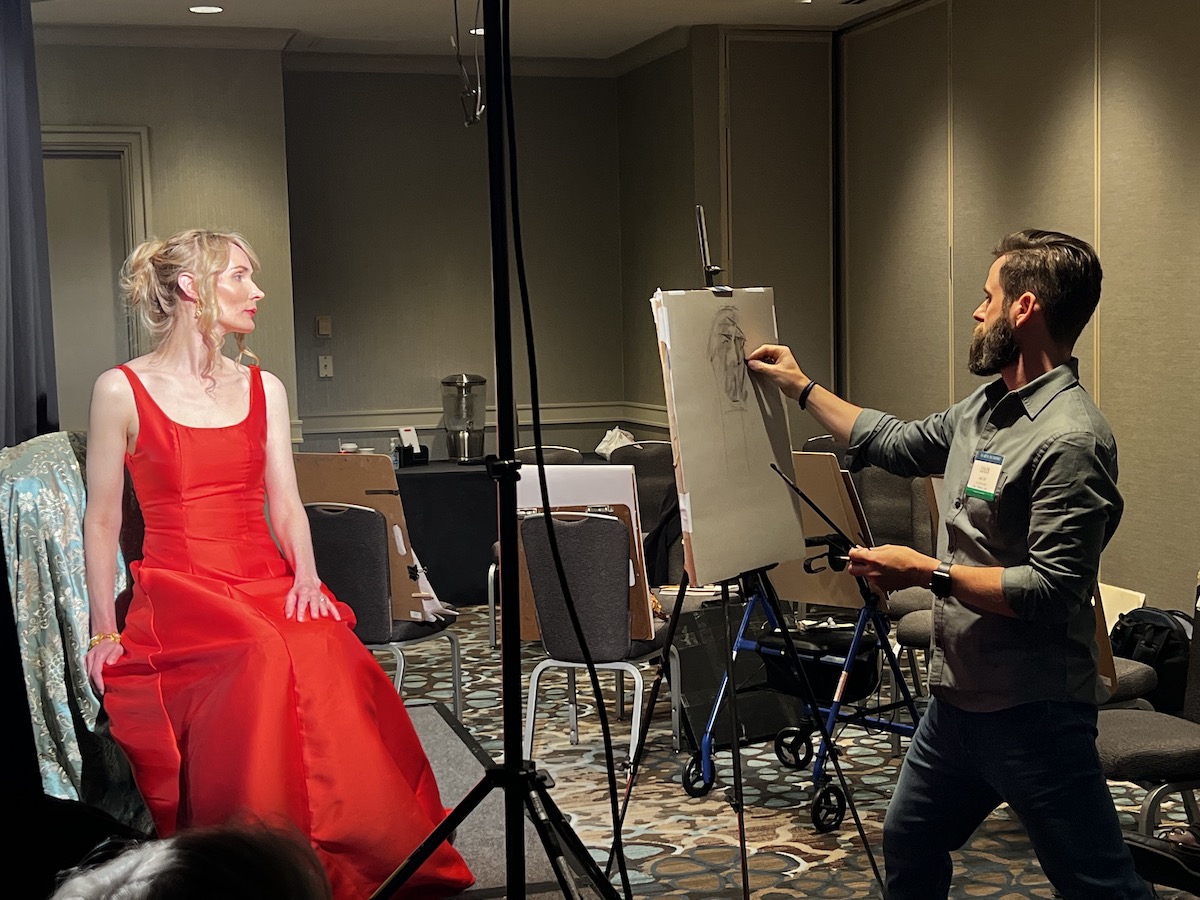 A frame fro Louis Carr’s demonstration“We are emotional beings capable of logic not logical beings capable of emotions” said Luis Carr, who presented the topic in his workshop, entitled: “Beyond the Face.” The artist, who habitually uses triangulation as a basis from which to create a portrait, maintains that a correctly executed portrait is capable of defining the personality of the subject by highlighting characteristics that are not actually tangible, such as emotion and character. “A look can say a lot” declares the artist who identifies, schematically, the facial muscles responsible for expressiveness related to perceived emotions: happiness, joy, surprise, fear, sadness disapproval. Each emotion is perceivable by facial expressiveness due to the contraction of certain muscles that highlight the relationship between the parts.

“You don’t have to know everything about the anatomy of the face, but you have to draw what you see by taking care to observe the relationships between the parts,” argues Michelle Dunaway, a student of the great master Richard Schmid and obsessed with rendering the tonal values of chiaroscuro. Dunaway accompanied participants in the creation of a portrait entitled: “Drawing the Alla Prima Portrait from Life.” With the use of charcoal she captured the essential aspects of the posed model, amplifying the drama of the details later with the use of charcoal pencil. In the creative process Dunaway expressly declares to play with different elements, such as: contrasts of values, broken edges and different textures, which she realizes with the variation of the stroke in a continuous back and forth.  According to Dunaway, in the creative process it is fundamental to make choices that highlight certain characteristics of the portrayed subject, which consequently acquires vitality, making it truthful.

“In the face, as in the body there are properly aligned segments and angles,” said Robert Liberace, an iconic figure from the Portrait Society of America who was present at the event with his entire family. Liberace, who possesses an extraordinary knowledge of human anatomy, addressed the complexities of the human figure in his demonstration session: ”The Complexities of the Human Figure”. The artist is able to raise the simple anatomical representation to a dramatic level not only in the way of exposing the concepts – always providing rich examples drawn from the history of art – but also through the tremulous stroke that characterizes his drawing. Liberace urged participants to draw in very limited periods of time – 5 or 10 minutes – because it is only by having a limited amount of time that the artist learns the importance of making immediate decisions by focusing immediately on the key lines of the drawing.

The conceptualization of forms and thinking three-dimensionally are the concepts with which Gregory Mortenson treated the pertinent topic: ” Stepping Through the Process.” According to Mortenson, the harmony of composition can only be achieved by thinking about the simple concepts of line and form. Concepts to which the artist states that he continually refers when he perceives that something in the composition is not working. Mortenson also claims that, understanding the tonal scale and thinking of objects as if they were spheres, is a process that helps greatly in the making of the charcoal portrait. This medium, like pencil for that matter, is based solely on the tonal value scale, unlike oil, which also involves the concepts of value, and chroma. With this premise Mortenson guided the participants through the fundamental phases of the realization of a portrait, namely: drawing starting from the block-in, continuously measuring the forms of the composition using the most congenial means – the artist uses an academic style pencil – and studying the behavior of light on surfaces and in perspective.

In the late afternoon, the 24th edition of The Art of The Portrait officially began and after the badges were collected, the participants attended the FACE-OFF: the demonstration session during which 18 artists created, over a period of three hours, portraits from life of some artists who were available as models. The FACE-OFF, in addition to being an artistically fascinating moment because you can watch the creation of eighteen portraits at the same time, is very interesting because it allows you to enter the artistic universe characteristic of each artist who has his own way of organizing spaces and focus on a detail rather than another. The artists who made the portraits were: Joseph Daily, Seth Haverkamp and Kerry Dunn; Daniel Sprick, Mary Qian, Tina Garrett and Elizabeth Zanzinger; Teresa Oaxaca, Paul Newton and Pramod Kurlekar; Anna Rose Bain, Adrienne Stein and Mardie Rees – who made a sculpture; Gwenneth Barth-White, Suchitra Bhosle and Ron Hicks; Jeff Hein, Quang Ho, Richard Christian Nelson. The works created during FACE-OFF will go on sale tomorrow after the session devoted to “6×9: Limited Size, Unlimited Talent Mystery Art Sale,” and money from the proceeds will be used to support the Portrait Society of America’s scholarship program.

The day is over and Miami Niche is waiting for you tomorrow to bring you into the heart of the events of this 24th edition of The Art of The Portrait: stay tuned.

(on the title: a frame from the FACE-OFF, last event of the day and official opening event of the 24th edition of The Art of The Portrait, from left, Quang-Ho, Richard Christian Nelson and Jeff Hein)