The third day of the 22nd Convention of the Portrait Society of America opens its doors with the great Richard Schmid, interviewed by his ward Michelle Dunaway, the first of a series of characters to be discovered during the day. 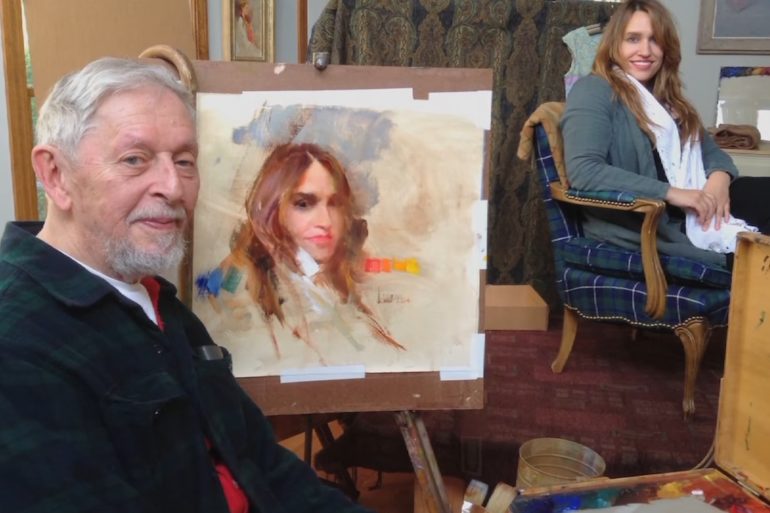 It is up to Michelle Dunaway at 9:00 a.m. to inaugurate the opening of the third day of the 22nd Convention of the Portrait Society of America, and she does so with a big piece, focusing on a character who has made great the American art scene: Richard Schmid, painter, author and teacher; legendary character known above all for the technique of painting “Alla prima”. The painting “Alla Prima”, which the artist applies indiscriminately to portrait, still life and plein air painting, is about oil painting and allows to speed up the time of realization of a painting, because you do not wait for the complete drying of a layer of color to lay a new one. At the interview, in addition to Dunaway and Mr. Schmid, there is the inseparable wife Nancy Guzik who, in addition to having shared her life with her husband, shared her love for art being also a talented artist.

The interview is actually a pleasant life story that retraces the steps of Mr. Schmid’s career: from when he moved from Chicago to New York, where he sold artworks in the middle of the street, to his PhD in Fine Arts, to the wonderful trips he made with his wife to some Latin American countries or the last trips they made to Scotland, England and Ireland in search of the perfect corner to portray.  Stories made also through the works and photographs of when Michelle Dunaway was a student of the Master and the welcome she received from both spouses with whom she maintained a splendid relationship. Richard Schmid and his wife in fact consider “confidence” fundamental, a form of special and important attention to know people in general but also a precious help in the knowledge of the character to represent. Dunaway remembers the works that more than any other attracted her attention when she was studying with the Master: the painting of his wife, which reminds us of Rembrandt’s works with a dark background that puts the fundamental accent on the subject, letting it emerge in all its naturalness; the chiaroscuro of some of his works inspired by the Renaissance period, including the painting of a young man and that of a beautiful young girl that the painter remembers being so graceful that he never had to suggest which position to hold.

And in this way it opens an important discourse about the models of the works that are not always at ease and it is important for the artist to establish a good relationship in order to grasp the best that the subject to be represented can offer: the beauty that he sees in himself and that the artist has no reason to diminish but rather to enhance. In order to make the models to be portrayed feel at ease, the artist has prepared a large mirror that remains behind him and allows the model to see the progress of the painting. A fundamental component in Schmid’s compositions is the music, about which his wife says:” Each of his paintings is so full of joy that he seems to feel the music that pervades the house” and in fact the gestures of his brushstrokes move to the rhythm of the notes of the music he listens to. When he was a child he studied piano at the Catholic church he attended with his family. His love for music has never abandoned him and although he was sidelined by practical issues at certain moments in his life when art filled the void, he returned stronger than ever to his love for art: “Everything I paint has a counterpart in music,” says Schmid.

In addition to having exhibited in over 50 solo shows including a retrospective in 2003 at The Butler Institute of American Art in Youngstown, Ohio, Richard Schmid is also the author of the “bible” of painting: “Alla Prima II: Everything I know About Painting-and More”, the new “expanded edition” that the great painter has decided to make available to new generations because, says his wife Nancy: “Richard feels the responsibility of leaving his knowledge to the world”. To conclude in beauty the interview Mr. Schmid leaves us a pearl of wisdom that represents in synthesis his philosophy on the meaning of art: “One day all this marasmus that afflicts the world will end but the art will remain and the artist’s task is to create the world he wants”. To these words echo those of his wife who adds: “Keep creative, positive and share your joy with the world, whether you are: artists, mothers or workers”. What can I say, great artists and great people.

The day continued with an intense chat with the talented artist Sharon Sprung who treated a very important technical theme: color and its components with references to the classification made by Munsell. There are four fundamental properties about color: hue, value, chroma and temperature. With her live practice examples, the artist showed how visual perception, optical effects, and the practical application of color phenomena, even in relation to the background, can change the perception of size and perspective. She answered Michael Shane Neal’s questions about the importance of flesh colors and the way she uses them. Sharon Sprung admits that she “plays” a lot with colors before composing the preparatory sketches and keeping a paper trail of all her experiments. Looking at her works, one notices an exceptional use of color, in terms of value, chroma, hue, and balance between warm and cold colors, which the artist applies layer by layer, manipulating the complexity of oil painting with the equally indomitable expression of the human condition: “I want the subject and his environment to collide through the use of color to form a unified composition,” the artist says about his work.

After another session performed by artist Cynthia Vowell led by the personal trainer in the performance of relaxation exercises to be done during the long hours of the artistic session, the afternoon demonstration had as protagonists Susan Lyon and Scott Burdick. Both artists married after meeting at the Palette and Chisel Art club, where they continued their studies (Scott Burdick studied at the American Academy of Art with the legendary Bill Parks, while Susan Lyon studied at the American Academy of Art in Chicago). The tight-knit couple, funny and in love with travel that represent an artistic stimulus for them, says that: “It’s a wonderful thing being able to paint together all the time and grow as artists together”. The demonstration saw them each paint the expressive model Kiana with their own approach. Before starting Lyon wears the usual little hat with visor that allows her to focus all her attention on the subject to be represented and after exploring the various angles she finds her favorite (lateral) position, while Burdick decides to perform a frontal portrait. If Lyon works on white canvas and uses thick, flat paintbrushes, painting through shapes, and blocking them with dark colors and then moving on to half-tones, using absorbent paper to help her finalize the stroke, Burdick does exactly the opposite and tends to block the light and  proceeds side by side with small pasty strokes that are composed on the canvas unlike Susan who spreads the color with long, flat brushstrokes. Both of them use Rosemary brushes, like most of the great artists present at the various conventions, ranking Rosemary in first place for the quality and durability of the brushes. According to both artists live painting is essential to maintain a sense of freshness in the work and it is very complex to paint a portrait in three hours. Portrait that is in itself already difficult because it implies a remarkable knowledge of anatomy and facial mimicry. Two totally different approaches, but both of great effect that vary from the rich Burdick palette, to the limited Lyon palette: different approaches, different techniques both excellent.

The day ended with the “triptych of delights” in which Elizabeth Zanzinger executed a painting “Alla Prima” using a limited palette in which the color plays a secondary role compared to the use of value. In her way of conceiving art, she likes to mix the ephemeral with the material, emphasizing the importance that empathy plays in the artist-subject relationship to be represented. In her painting she gives precedence to large forms which, if well executed, facilitate the insertion of details that she considers equally fundamental but in any case secondary. Her Alla Prima  portrait is a vigorous brushstroke work that reflects and strengthens empathy in the duality artist-subject. The artist says of herself: “I choose painting because it is modest but powerful in its silence.

Suchitra Bhosle in her realistic and representative style, typical of 20th century painters, portrayed a model with the theme “Painting the spirit of the person”. In fact, Bhosle declares that although it is not easy to represent a person, it is even more difficult to capture the essence of the person, which she manages to put into practice as she did in the realization of the work.

Stay connected with Miami Niche on the last day of the XXII Convention of the Portrait Society of America which has in store great figures who have made the history of American painting.