The third day of Realism Live: from the academic representation of the torso to floral painting, through art history and portraiture. 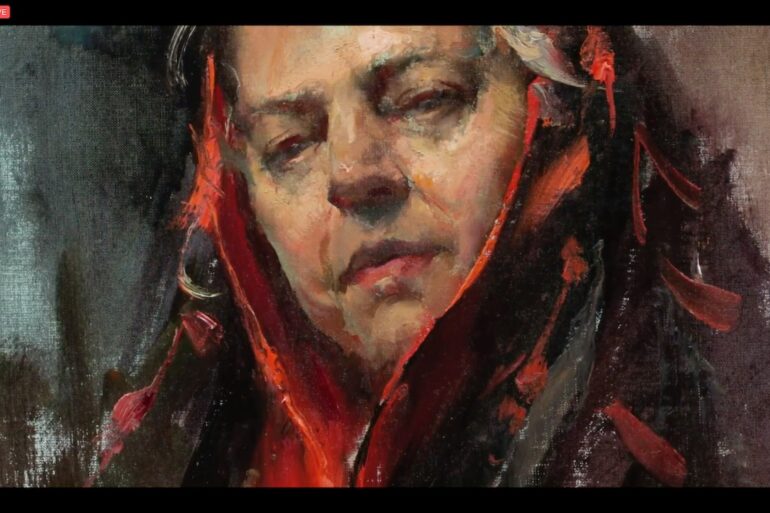 The day of Realism Live always begins with the cheerfulness of the fancy dress dance (reminiscent of the Halloween party that should have been celebrated in Baltimore with the fourth edition of FACE -Fine Arts Convention and Expo, postponed to next year in Williamsburgh (virus allowing) which is punctually followed by the energy of Eric Rhoads who presented himself this morning with a Caribbean-themed fruit hat. After the opening greetings the third day of Realism Live began with Dan Thompson. To mention Thompson’s studies, awards and recognitions would mean spending pages; on him it is enough to say that he is the Dean of Faculty and Students at Studio Incamminati in Philadelphia, founded by Nelson Shanck, he is Faculty Chair at the prestigious New York Academy of Art in New York, founded by Andy Warhol and co-founder of two important art academies among them (the)The Grand Central Academy of Art in NYC. His “surgical” knowledge of human anatomy has been put to good use in the realization of another essential exercise for the knowledge of drawing: the representation of torso from the cast model. Dan Thompson’s mission was to orchestrate, without forcing, the technical and emotional narrative of the lines that make up the figure and its chiaroscuro that proceeds between variations of lines and value until the three-dimensionality of the torso emerges. A couple of fundamental warnings to approach drawing correctly says Thompson:” What should we draw: what our eye sees or what our mind knows (the academic concept)? We must be able to make the two things converge”, but in any case:” Form before light. Form before the value”. Because the form prevails over everything, if there is not the correctness of the anatomical design everything else does not work in the whole that must be harmonious.

Dan Thompson, “technical specialist,” was followed by professor Jean Stern, art historian and Emeritus Director of the Irvine Museum in Irvine, California.  With a transversal flight, the professor catapulted us through the history of Realism, mentioning some of the great artists of the past, from Europe to America, up to the present. Among the great protagonists of the present there are many artists who have demonstrated their skills in the various editions of FACE or Realism Live, this year. Among them there are: Daniel Sprick, Rose Frantzen, Juliette Aristides, Joshua LaRock, Daniel Gerhartz, Dean Mitchell, Graydon Parrish and William A. Schneider.  An interesting story that deserves to be studied but above all told over time through the works of this great artistis and many others.

I do not know if it is his Venezuelan origins or his personal nature that make Jesus Emmanuel Villareal a sunny person, the fact is that his freshness leaves a trace in his paintings. Today’s demonstration of “Strategies for painting from direct observation” is the painting of Nana, his friend and skilled artist who practices at the MIFA-Miami Academy of Arts-, directed by Elkin Cañas: an extraordinary art academy that has decided to pursue the path of realism in an artistically changing city like Miami. Villareal is a great artistic talent that has represented Nana through the immediate drawing on the canvas without preparatory schemes. For the artist it is necessary to fix the general value of the color in order to be able to “refine” going towards “Zen”, as he defined it, that is the precise representation of the details that make this portrait a painting. Fundamental for Villareal is both the need to establish what can be defined as a sketch and what can be pursued as a painting and when a work can be defined as finished: “it is up to the artist to decide when he has finished telling his story”, said Villareal.

Today’s critical session was conducted by the talented Gabriela Gonzalez Dellosso, who was in the faculty of FACE 2019, where she represented the recently deceased Master Daniel E. Green. Gonzalez Dellosso is the artist of the extraordinary exhibition “A Brush With HerStory: The Painting of Gabriela Gonzalez Dellosso”, closing on October 25 at the Polk Museum of Art in Lakeland, FL. If you haven’t seen it yet, take a peek online and if you can hurry it up, it’s really worth it. Only one flaw in today’s critical session: no more time to see beautiful works in watercolor, pastel, oil and acrylic that only need a small step to achieve the perfection developed by critics.

Cosmos atrosanguineu, commonly called Chocolate Cosmos because of their scent and butterflies are the components of the floral composition that Kathy Anderson represents directly from her garden and that for the occasion she showed in various passages for the representation of a large canvas almost completed, of which she then took a small part for the live performance in the studio. Anderson is a Master Signature member of Oil Painters of America and a member of the famous Salmagundi Club in NYC. The artist uses to cover the canvas with a sort of imprinting that forms the green base and from which she then removes the color to define the value of the elements to be represented, and then proceed in painting without preparatory drawing. In this way she can fix the light and the dark that serve as a reference.  Anderson emphasizes as, also for the representation of flowers, is necessary to have the adequate skills in drawing and how it’s important to take your time to complete the composition in peace and harmony with nature.

The day of Realism Live ended with a demonstration by Daniel Gerhartz. who, inspired by his tireless “appetite” for museums, was fascinated by the modern masters: from the American Sargent, to the Russian artists including Nicolai Fechin and Ilya Repin, whose fascination with mystery is recalled in his work. The reference to Repin in particular is then evident in the drawing up of the color: it is fascinating to observe both the technicality with which he combines different densities with that in which, to finish the work, he allows his gestures to be guided by the brush for the development of small details capable of releasing all the power of the painting, as in the tufts of hair or the drama of the rebozo.

Son, like Rose Frantzen of the “old school” of painting at the premiere of Richard Schmidt Gerhartz was assisted by the help of the model Darleen, a very expressive and interesting model who posed for him with a sort of Mexican rebozo on her head.

Daniel Gerhartz’s motto is very simple: “to squint” as much as possible) to see the effects of value and temperature and release them to see the transaction between the colors in order to define the sharp edges from the softer ones always remembering to evaluate the work as a whole. New video tutorials will soon be released in which he will put into practice new methods of approach to painting through clear and concise teachings of edges, values and color temperature. To those who then ask if it is necessary to have special skills to participate in his workshops he answers, with humility: “just a lot of good will!

Today -the last day Realism Live- is waiting for us and between the surprise promised by Eric Rhoads, the award ceremony of the best Self-Portrait -the contest that promises to be part of history- as well as the entire program of the day will only close in beauty the Halloween themed dances in the morning and the entire convention.