The Stone Crab season gets rolling with the South Beach Seafood Week, from 17 to 21 October 2017

October for the city of Miami is synonymous with Stone Crab. To pay homage to this crustacean, (Menippe mercenaria) from the taste and size of the unique claws, South Beach has decided to open the crab fishing season – of extremely limited duration by law: from May to October – with a succession of events that will brighten the paying public from October 17th to 21st. On October 17th, the show will begin with the Crab Slabs and Cabs sponsored by the Jackson Family Wines that will combine with each show cooking by the Menin Hospitality chefs, a wine of their production. On October 18th, Cooking and Coctails will cook 6 luxurious tapas combined with as many cocktails proposed by the Mexican brand Herradura, renowned Tequila producer and among the sponsors of the Festival, combined for the occasion by Ezra Pattek, mixologist. 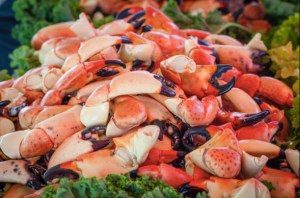 On the 19th there will be One night at Joe’s Stone Crab, sponsored by La Crema, a winery producing mainly Pinot Noir and Chardonnay in Oregon and California. Joe’s Stone Crab, flagship in the Miami Beach restaurant scene, will open the doors of the Jessie Room, an original period room that saw celebrities such as Al Capone and Frank Sinatra, pass through. The convivial manager Brian Johnson, will charm the guests by telling the story of the iconic restaurant and teaching the art of breaking the crab’s claw, on which depends  the survival –or not- of the crustacean, in a perfect way. The Chef Showdown on October 20, will bring together the best chefs in Miami who will compete in an 8-course cook-off of fish, for a total of 16 dishes, where the customer, and him alone, in the tasting of each of the dishes proposed in the race will judge the winner. 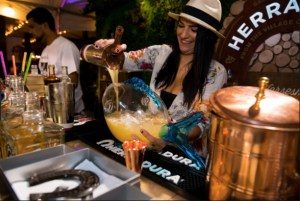 Hosted within the Range Rover VIP Hospitality Village and the GOYA culinary pavilion, the chefs will compete in a duel with the latest stone crab, surf & turf, shrimp, tuna, fish mixture, and flavored taco of sea, and starting this year sushi and oysters. Finally, on  October 21st, to end the festival, sponsored by Kendall Jackson and presented by Coca-Cola and Jack Daniel’s, will offer a unique dining experience in the most beautiful atmosphere of the beaches of South Beach in a mix of all the events . In fact, at Lummus Park, 4 blocks of surface will be available in which 18 restaurants (Joe’s Stone Crab, Naked Taco, Food, Red, the Steakhouse, Dragonfly, CJ’s Crab Shack, Lobster Bar Sea Grille, A Fish Called Avalon, La Moderna , Poseidon, Nikki Beach, Toro Toro, Truluck’s, Rusty Pelican, Papa’s Raw Bar, Naked Crab, Whole Foods and Meat Market) will serve their dishes directly on the sand, refreshed by a glass of delicious Kendall Jackson Chardonnay or Jack & Coke, while intoxicated from the music of the most famous DJs on the flourishing scene. All while in the Whole Foods Demo Zone the chefs and mixologists will perform in spectacular show cooking. What can we say? Wallet in handy and stand in line.