The sports and celebratory art of the great legends of sport, music and art of The McTiers exhibited in the ModArt-District of Miami. 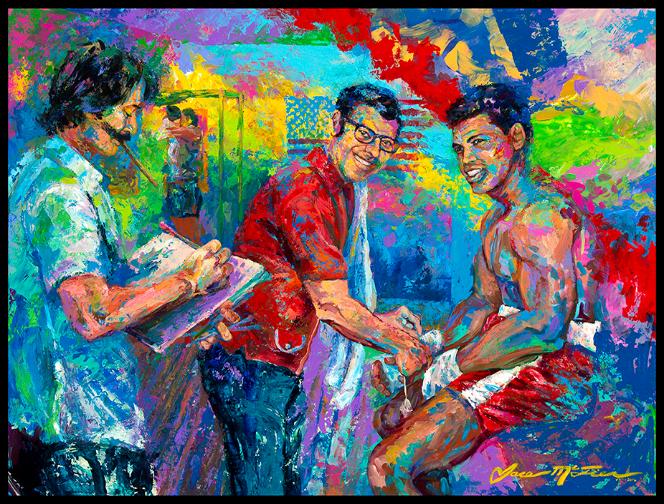 For all those people who have missed the Miami Open, there is a chance to see the works (along with many others equally worth it) that Lucy and Jace McTier, The McTiers, exhibited at Hard Rock Stadium for the ModArt Gallery, now visible in the gallery itself, from April 6 to  July 12, 2019.

Lucy and Jace McTier, mother and son, are the concrete example of how a relationship can be affective and collaborative at the same time, because Lucy’s love for art is such a great love that she managed to pass it on to her son Jace and second son Ty: who, both passionate, decided to follow his mother’s footsteps in the case of the first and choose a law path in the case of the second.

Graduated from the University of Georgia in 1975 in Graphic Design, where she meets her beloved husband who spurs her on in pursuit of her passion, Lucy Pittman McTier, dreams of being an artist as a child when she spent her time drawing on a magnolia tree or running around meadows with her dog. Since then she has made history,  exposing works of art in over 350 public and private collections. Her works, mainly in oil and acrylic on canvas, range from naturalism, Wildlife Collection, inspired by the landscapes of her childhood and her interest in birdwatching, which she represents in great detail and nuances, to spiritual paintings, Biblical Art, in which , whether it is a passage from the Bible rather than a stand-alone event (Metamorphosis of the Unborn), religious images go beyond religious belief to reach social meaning as color explodes to reveal divine light. 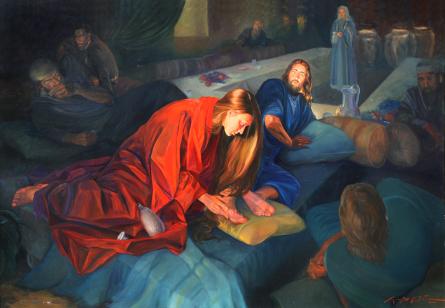 Particularly appreciated for commissioned portraiture, she created several works, including an oil painting of the esteemed President Ronald Reagan riding his Arab stallion, exhibited in the Oval Room and delivered directly to the White House President in 1985, in the presence of her husband and her son Jace, who will remember him forever, as it inevitably marked his path. In addition to Ronald Reagan, among others, she painted the American legend Robert Tire “Bobby” Jones Jr. amateur golf player and founder of the Masters Tournament of Augusta, Judge Jim Abbot and the historian Wright Abbot. Her art celebrates characters who have made history, of whom she researches the life that she  projects on canvas mixed with the emotions that the image conveys. The bright and vivid colors that characterize the art of her son Jace can be glimpsed in Lucy’s Equestrian Art series, in which the living static of her portraits contrasts with the representation of movement underlined by the colors that emphasize the animal’s sense of power and the speed of equestrian competitions. She started painting horses in 1979 and the love that binds her to this animal emerges in every one of her paintings.

Since then Lucy continues to paint moving horses for the various horse races of the American territory while her son Jace has the honor of painting the first classified. 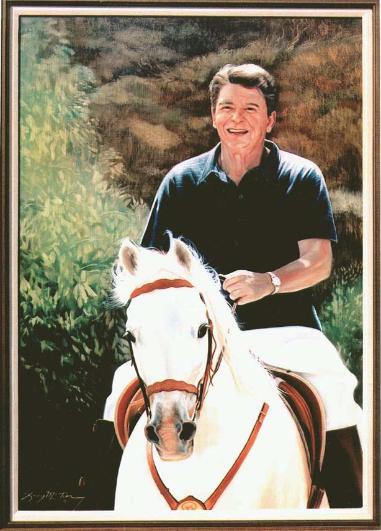 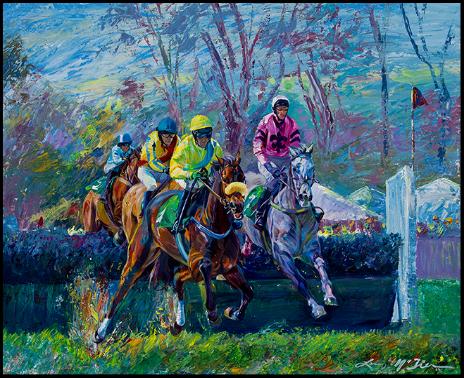 His artistic ability due to elective affinity and personalized style have made Jace a character known to the world of sports and portraits. Jace composes mostly historical and contemporary portraiture works that celebrate sport: boxing, golf, tennis, equestrian and aquatic art. His portrait of the human figure in motion captured in the middle of the action is very captivating and is characterized by the power of color that becomes dense and consistent, and is further emphasized by the spatulate and short brush stroke that falls on the canvas to highlight a muscle in contraction, facial tension or a squashed ball, when he paints tennis players, and a longer stroke when he paints golf players whose technical rigor and concentration are defined in the artist’s own technique. Jace has in fact the extraordinary ability to cadence the brush stroke according to the type of sport he represents, but after all it could not be otherwise, since we’re talking about people that not only represent sports, but live them in first person practicing them. 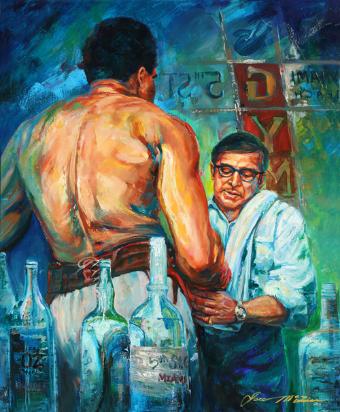 Jace’s talent emerges very soon, he is just sixteen years old when he receives his first commission for the equestrian Olympic trials in Thomson, Georgia. From the Olympic trials to the series representation of 5000 copies for the celebration of the John Deere Corporation, the pace was very short and in 2009 he was convened to celebrate the history of boxing according to the eyes of the legendary Italian-born boxer, Angelo Mirena, known by the name of Dundee. A beautiful friendship that will bind them until the death of Angelo in 2012, and a remarkable springboard from which to take flight and through which the explosive colors of Jace, combined with his moving figures, make his art characterized and refer to the mind of one of the greatest sporting artists in history, with the works of which he exposed Le Roy Neiman, of whom someone thinks Jace is the direct successor. 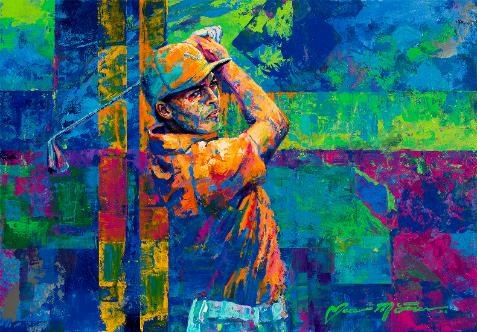 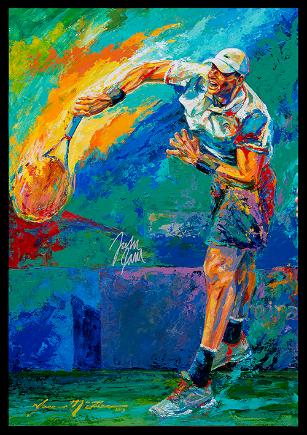 Originally from Georgia, the McTiers are literally in love with Miami, a city of which Jace claims: “It is a city in continuous evolution but at the same time it is a city that warms the heart, so rich in color and folklore, transmitting energy and the energy combined with color is an explosive mixture ”. Energy and color, the same criteria on which the art of the McTiers is based on, who met the curator and owner of ModArt, Norka many years ago when she bought one of their works of art (in which she appears) and since then in addition to a collaborative relationship, there is a good friendship that binds them, says Lucy McTier: “The people, energy and culture of Miami have greatly influenced our artistic research and Norka’s gallery is a fresh and beautiful space to put it on show. Her approach to the show is intelligent and warm at the same time: we love her enthusiasm, it is stimulating”. ModArt District is located in Wynwood and the term ModArt, composed by the synthesis of the word modus and art, means “way in which everything is made according to art”, because to Norka the sense of art is strong and does not stop at painting, just like the choice to bring portraits of great singers to exhibit in the gallery is no coincidence, in fact Norka in addition to being a gallerist, curator and art collector is an established singer of Venezuelan origins. 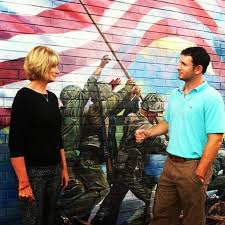 The exhibition in the spaces of ModArt-District consists of the works of Lucy that, in addition to three works, two of which are naturalistic, representing turtles, a carapace with a strong emotional meaning for Lucy, has exhibited portraits of the great names of music and art, including the Miami Royalty Gloria and Emilio Estefan, the great Celia Cruz, Carmen Miranda, Carlos Gardel, Juan Gabriel, Marc Anthony and Frida Kahlo. Also on display, in a more intimate way, is an elongated picture, made many years ago, which was also reproduced on a large scale (20×8 foot) in a mural version in Augusta, in a four-handed work done by mother and son. Jace and Lucy, as complete artists as they are, are not new to even large-scale works. In fact, they made several murals, one of which was in Wreng, Georgia, adjacent to the Veteran’s Memorial Park in honor of war veterans. Jace, instead, has created Off The Ropes, for the Matt Baiamonte’s Boxing Club of Wynwood, Miami in 2014 during the Miami Art Week: from a work made for the series by Angelo Dundee, coach of Mohammed Alì, in which is celebrated the honesty that, in boxing , as in sports in general, counts more than anything else and that is celebrated in all the works exhibited by Jace, which portray the great characters of the box, tennis and golf, including some splendid paintings by Angelo Dundee and Muhammed Ali (The Calm Before the Storm and 5th St. Game Plan), Rickie Fowler (Champions Road), Arnold Palmer (The King in ’58), Lee Trevino (The sweetest Victory) and the recent works exhibited at the Miami Open, including Serena Williams (Champion’s Star) Roger Federer (Back Hand Ballet) and John Isner (Big John, Aces High and Atomic Serve). Also noteworthy is the Hard Rock Stadium (New Home Hard Rock, a chicness given the inauguration of the new stadium), Time the representation of Usain Bolt, World Cup Domination the representation of Kylian Mbappé and Coming to Miami a wish to the president of the new team Miami FC, David Beckham and to the new mammoth football field. 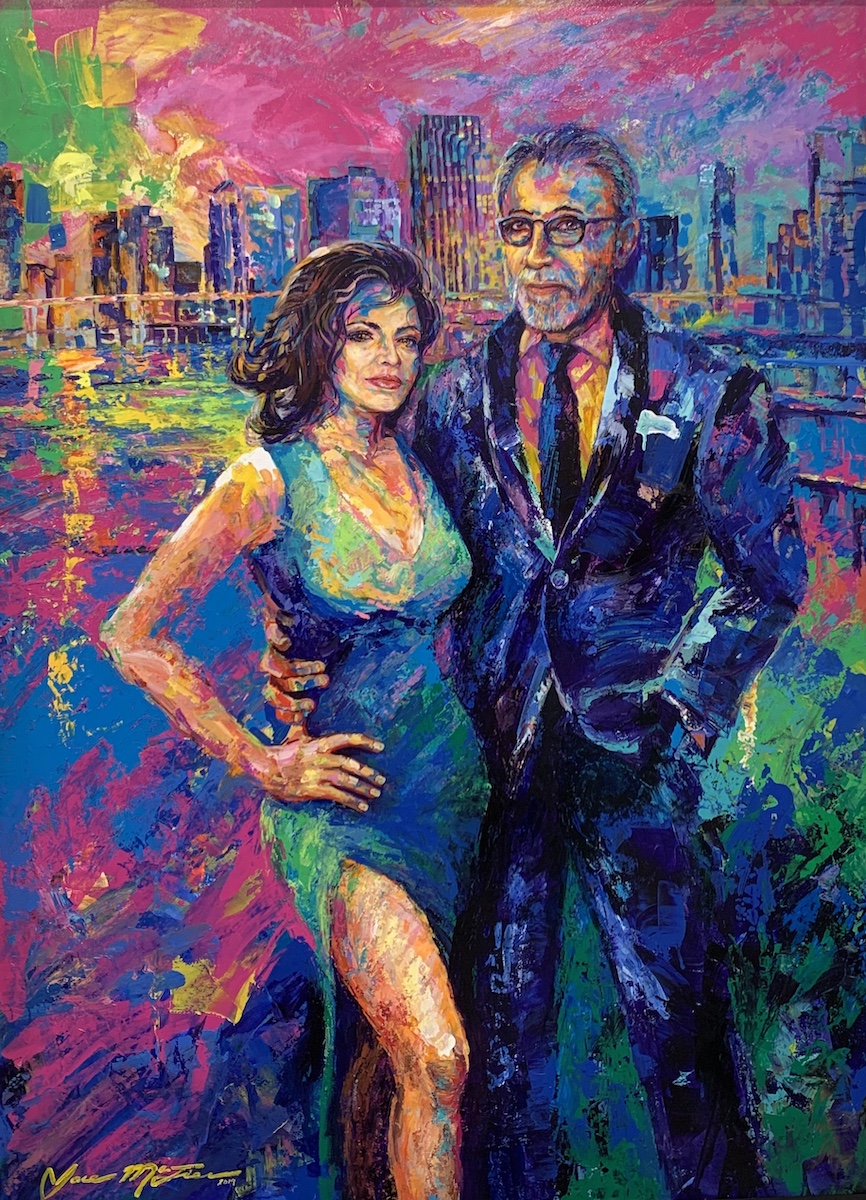 Whether it’s sports painting, medium-sized portraiture or murals, The McTiers are a great team that are immortalizing the story of the great characters, not just sports, of the yesterday, today and tomorrow, with the grit and the energy that the color of their paintings can give off: the history and the action that live in a work of art, what more can one desire.