The sensitivity of the duo Les Lalanne relives in the Raleigh Gardens in Miami Beach. 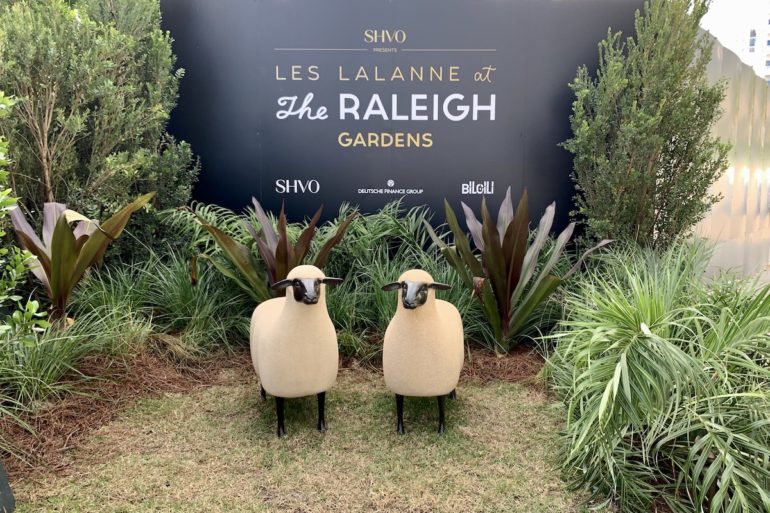 The Raleigh Garden in Miami Beach honors the memory of Les Lalanne, the duo formed by Francois-Xaiver Lalanne and his wife Claude Lalanne, who recently passed away. The creator of the installation, which is open until February 29, 2020 is the friend of the couple Michael Shvo, collector of some of their works and founder, President and CEO of SHVO, the New York-based real estate company that deals with the development of luxury properties. Michael Shvo, supported by Peter Marino and Raymond Jungles.

On display in a corner of paradise in the lush tropical garden adjacent to the sea and South Beach is the largest open-air public exhibition ever on Les Lalanne. The installation is the second collaboration between Las Lalanne and Michael Shvo, the first being Sheep Station: the pioneering public art project staged in 2013 at the former Getty petrol station in West Chelsea and which exhibited 25 Mountons, the iconic rams in epoxy and bronze, designed by Francois-Xaiver Lalanne.

The installation at the Raleigh Gardens includes 32 works by the artists, including the Porte du Jardin, by Claude Lalanne, through which you physically enter the enchanted garden, symbolically in the magical world of artists: a surrealist landscape between the hotel, being restored, and the going and coming of the people on  Miami Beach shrouded in lush vegetation. Walking through the garden driveway, you will encounter the Tortues Topiaire (turtles) who bring on their carapace elements of the rich vegetation, the great Poisson Paysage II (the bronze fish), the Moienne Pommes (the golden apple) and the magistralis work of Francois-Xaiver Lalanne: the iconic Moutons that for the artist have symbolized the demystification of art in order to capture its essence, represented according to the artist by the joy of living. Proceeding along the trail the Vache Bien Etablie and the Grand Vache Attentive (the well-stabilized cow and the big attentive cow respectively) lead the visitor to the crossroads where Le Trés Grand Singe Avisé (a large monkey), with a left-facing face indicates the path to be taken. The solitary and melancholy Fontaine Pleureuse placed in front of the Lit Singerie (the copper and bronze bed) fascinates the visitor, while on the other side the Banc Ginkgo (bench), invites you to pause and reflect on the beauty of Fontaine Pleureuse. Passing by the Grand Oiseau de Nuit (the great owl) that observes the visitor undisturbed with its austere bearing, the Trés Grand Choupatte (the great anthropomorphized cauliflower with bird’s legs) invites us to follow the way, where we can see the Grand Mouflon de Ram Island (the great mouflon of Ram Island) from the top of the stone-made hill on which it stands, leads us to Le Lapin de Victoire (the victory rabbit) with its firm and powerful stick that invites the visitor to stop and look around.

In front of him a pond with the Grand Carpe D’Or (the great golden carp) and the Grenouille (the frog) that show us the undisturbed Petit Olympie, among the masterpieces of Claude Lalanne, in which reveals all his artistic sensibility: a bronze statue not finished with his face bent towards the pond and his raised arm from which comes a delicate continuous spray of water. A fountain would be vulgar, but the beauty and suggestion of the sculpture make her a masterpiece of poetry that attracts the visitor and catapults him into the magical dimension of Claude Lalanne’s inventive, poetic and surrealist sculpture with his unparalleled delicacy and sensitivity. Collector and philanthropist Adrienne bon Haes, who got to know Claude Lalanne years ago at the Fairchild Tropical Garden and on other occasions in the galleries of New York, says of her: “She was endowed with unparalleled kindness and humility, with a face capable of making people smile and the ability to dress in an elegant way (as only French can do) in extremely simple clothing. She was a great worker with a great sense of humor: her art was not a transposition of the ego but was pure joy and enchantment”. 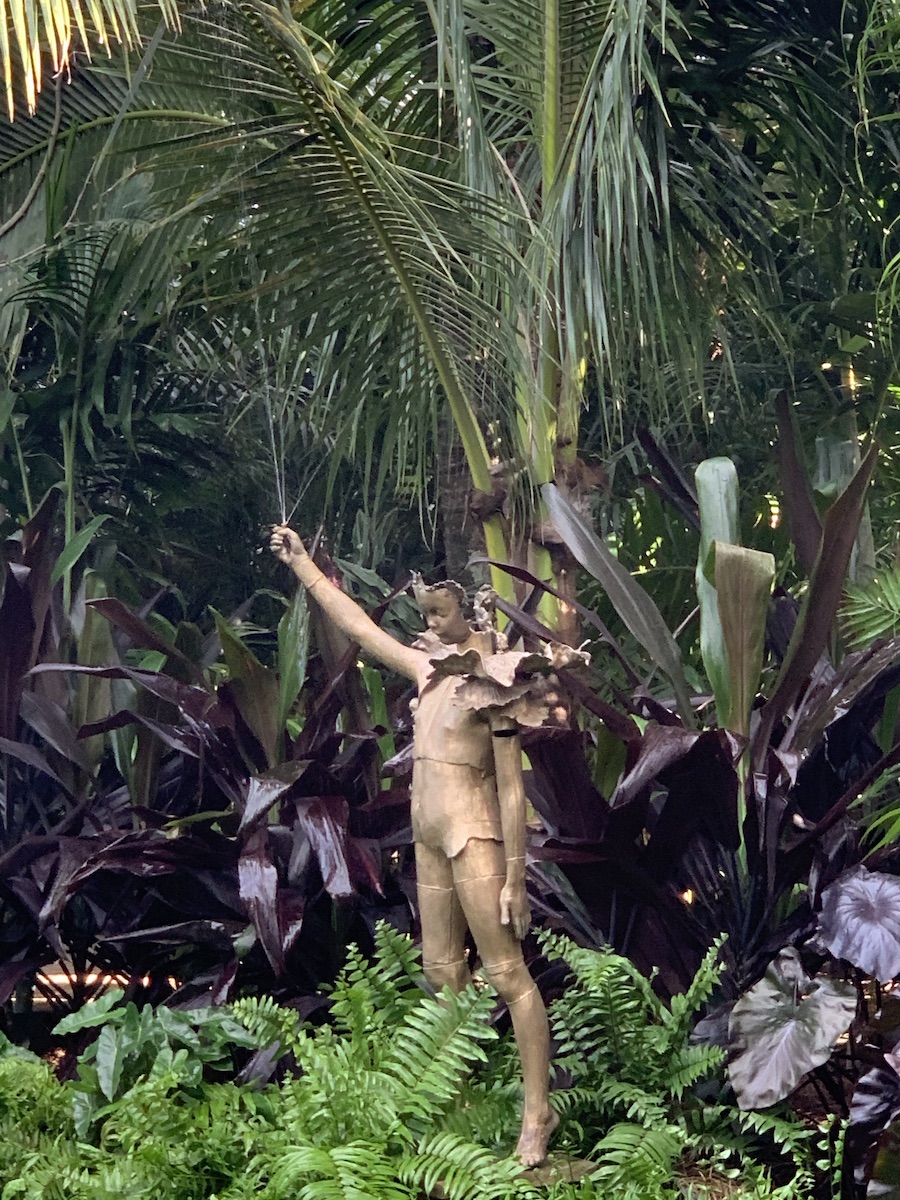 Continuing the visit of the gardens you can see on the left of the benches, a table with chairs with naturalistic resemblance that seem to come out of the vegetation itself (Table et Chaise Gingko and a couple from Banc Williamsburg) and that demonstrate how the shapes stylized animals and subjects represented by Les Lalanne often combined form and functionality.

Proceeding towards the exit, finally, to greet the visitor, is the Grand Wapiti (the great moose) and again the Mountons that close the magical circle of the universe of Les Lalanne in which the animal world is the richest and most varied form of the planet.