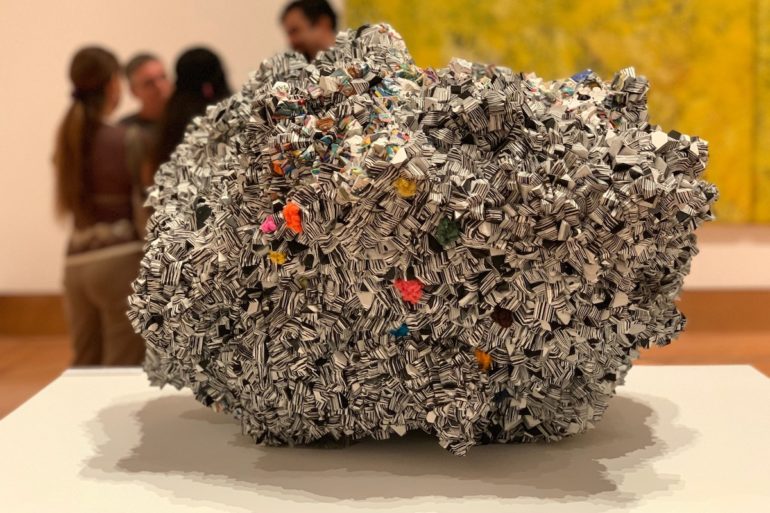 Abstractions and artist books are the themes with which Amy Galpin, Curator of the Patricia and Phillip Frost Art Museum, celebrated the opening of two exciting art exhibitions: Cut-Abstraction in the United States from 1970s-Present and Spheres of Meaning, an exhibition of Artist’s Books, both on display until August 25th 2019.

The opening of the exhibitions followed by the conversation between Amy Galpin and two of the artists on display: Carol Todaro and Loriel Beltrán, both living in Miami. The two artists support the importance of the experimentation process on the different materials that led them to the production of their works. Carol Todaro, who exhibits in Spheres of Meaning, an exhibition of Artist’s Books, is a teacher at the New World School of the Arts in Miami and is an artist and writer who combines both activities by creating artists’ books. The balance of the work on display (Villanelle, 2019) is the translucency and transparency of the large-scale work, played on pastel shades and supported by lecterns, as if they were ephemeral music.

Loriel Beltran, exhibits in Cut-Abstraction in the United States from 1970s-Present. She was one of the founders of what was one of the most entertaining art galleries in Miami, initially called Guccivuitton and then Versace Versace Versace. In his work, Classical Weight, he conceives abstract art as a process that takes months, even years, of preparation and consists of layers of color left to dry in the air and grated until they are compressed one on top of the other as if they were layers deposited and amassed by time that let us see all the colors of which they are composed.

In addition to these two artists, many other artists took part in the exhibitions.

Cut-Abstraction in the United States from 1970s to Present, is an exhibition that offers several generations of American artists in comparison that trace the history of American abstraction, helping to pursue new directions in the field, which expand previous studies with a different approach. To name a few of the artists: Jack Whitten, which his work covers the years 1974-5, Alejandro Contreras, with work up to 2019,  Sam Giliam (1979), Ed Clark, (1999), Alvin Loving, Jr, Charo Oquet , Howardena Pindell, and many others.

Abstract art has played a fundamental role in the history of modern and contemporary art in the United States of America, challenging the traditional ideas of artistic canons. Thanks to the incipit of abstraction, some artists abandoned the brush in favor of the spatula, or of the paint diluted and recomposed in shapes, lines and colors arranged in order to create a composition that could exist with a degree of independence in its own right with respect to the references visuals in the world.

There were several criterias with which the artists on show conceived the concept of abstract art. Among them Jack Whitten that has designed special artistic tools that served to concretize the different approaches to the varnish with reference to the experiments as he stated: “I cut paint, I laminate paint, I grind paint, I freeze paint and I boil paint”.  One of Jack Whitten’s artwork in exhibition is dedicated to the late Alvin Loving, Jr, the first black artist to have a solo show at the Whitney Museum in New York. Also on show is a work by which abstraction turns out to be the combination and overlap of spiral shapes (symbolically the spiral represents the continuity of life), which symbolize the quilts composed by the mother when he was a child.  Always referring to the art of quilt, particularly popular in the state of Mississippi where he was born, are the works of Sam Gilliam that represent a sort of quilted in which three large canvas panels are soaked in color, and suspended as if they were sculptures with all internal experimentations of form.

Jacin Giordano reaffirmed with his work (literally a paper cloud) the concept of sculpture according to Frank Stella, for which: “The sculpture is just a cut-out painting that was raised somewhere”. Angel Otero, on the other hand, conceives Abstraction as a superposition of layers of cuttings from previous works that create a dialogue with the past, while Clara Varas, mixes painting and sculpture by cutting the canvases and becoming the chaotic combination of disparate forms. Ed Clarck is affected by trips made in China, North Africa and Greece, and often paints his canvases with a broom while the seemingly flat but bulky works of Elizabeth Murray seem to interact with each other.

It has geometric forms and bright colors the work that seems to release kinetic energy, by Alejandro Contreras. Nanette Carter explores the brightness, density and transparency of Mylar (the material developed by Dupont). The spiritual work of Charo Oquet, is instead, a connection of forms and materials that he paints with intense and chaotic energy. Jeffrey Gibson’s works are dynamic collages, and the circles cut by Howardena Pindell are her signatures. Maria de Los Angeles and Roberto Jamora take up themes linked to their past as immigrants.

While the artists of Cut-Abstraction in the United States from 1970s-Present, paper and canvas, are means through which to express their concept of abstract art, for the artists on display with Spheres of Meaning, an Exhibition of Artist’s Books, is an expression in an artistic niche form. Only those who know, or have the opportunity to see, are able to associate it with the concept of high artistic form.

The artists in question make books and transform the idea of ​​reading and turning the page, as an artistic process that is composed of materials that can be surprising. Examples are the works of Lisa Haque, Dua and Milk Teeth: intricate works of handmade paper that seems to become a soft fabric that incorporates delicate embroideries of different textures or a child’s milk teeth (romantically those of the artist’s daughter)

Miami celebrates Abstractionism as the cradle of contemporary art and it appears as a surprising context that the exhibition makes a point about the modern history of the city, with the books that belonged to Purvis Young, the famous self-taught artist from Over town, homeless and ex-convict, who used to frequently claim the discarded books from the library that he painted, also using the most unlikely sheets such as a restaurant waiting list.

Among the artists on show Rosemarie Chiarlone and her research of the visual structure of the text as line, image and plot that explores the boundaries between physical and psychological. They are nostalgic collages and sketchbooks composed of pages of images taken from comics or art books by Diego Gutierrez. Instead, two of Donna Ruff’s altered books, are inspired by the tragedy of Hurricane Katrina (in August 2005), which manipulates and alters the paper to create new forms.

The tactile book of Rafael Domenech offers a narration of the distances between the work of art and the spectator; Claire Jeanin Satin’s books offer alternative visions far from the conventional barriers that try to reconstruct pieces of phenomenal experiences in new and imaginative aesthetic forms. Onajide Shabaka’s prints, drawings, videos and photographs, recreate a meticulous observation process; Lydia Rubio combines in her artistic books, painting (ink and watercolors) with travel memories (tickets, banknotes,…). The pages of Carlos Maciá include alchemy, religious studies, tarot art and astrology, and he presents for the exhibition the pages taken from the Latin book De Sphaera published in 1564. An encouragement for those who lived with books their whole life, is the work of Margarita Cano, who worked for thirty years at the Miami-Dade Public Library in Miami.

Whether it is a poem rather than a romantic story, a sentence composed of deletions rather than images that refer to old books, the artist’s books on display are a surprise inside the surprises. If the approach with which the observer approaches, satisfies the aesthetic curiosity, touch and intellect are equally satisfied. All that remains is to open those old cartons, and flip through the pages or open them like an accordion, and let the imagination run free.