The narrative realism of Pamela Wilson: the extraordinary conversation between elements of her own life, dreams and antiques. 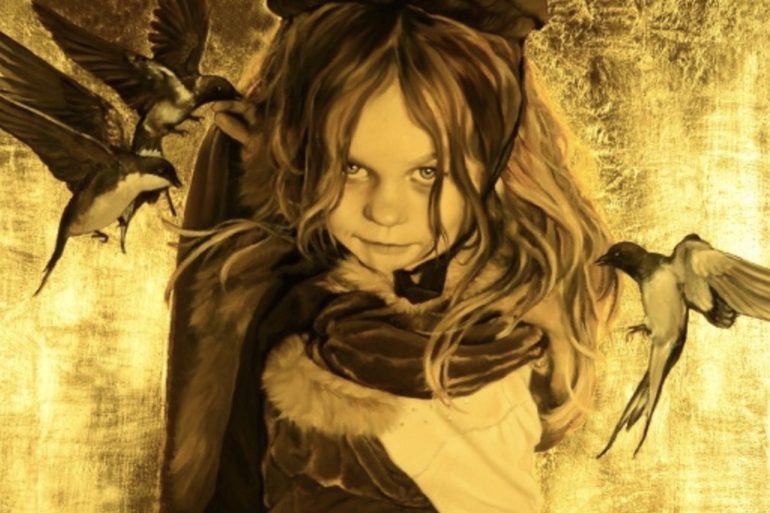 An extraordinary artist for her unconventional, creative and poetic way of representing the female figure in her way of being, Pamela Wilson is one of my favourite artists: I find her works, so extraordinarily out of line, wrapped in a delicate halo between madness and magic. Pamela Wilson is a Californian artist who received her MFA from the University of California, Santa Barbara, where she also received a Regents Fellowship, the Abrams Project Grant, and a Regents Award for her thesis. She is currently Mentor Faculty at the Laguna College of Art & Design in Laguna, CA, where she works alongside individual graduate students to help them with their individual work, an experience that the artist finds exciting and uplifting at the same time.

She has almost 30 years of exhibitions to her credit, during which she has held 23 solo shows.  Her works have been published twice on the cover of the prestigious American Art Collector Magazine and her works are included in important collections including The Bennett Collection, which owns the splendid “Carmela, Called by the Cerulean Sea”.

Wilson’s starting point in her creative process is the intuition that can start from a music (Coco Rosie was a great source of inspiration), a film, an idea linked to her personal experience or the image of an antique that catches her attention. In fact, Pamela Wilson loves to hang out in antique shops in constant search of an object that fascinates her to such an extent that it connects in some strange way to her personal sphere, succeeding in this combination to tell a thrilling story: “I must see and smell and touch an object or piece of clothing that will become the impetus for a painting, or series….Old objects house talkative ghosts”, says the artist in this regard.

As can be seen in her works, these magical female figures, be they women or girls, are dressed in clothes and objects that evoke distant times made of tulle, lace, bowler hat, large pocket watches, weapons of other times and dolls: all objects that become an integral part of the character and that push the artist, like an acrobat, to walk on a thin thread that keeps her in balance between the world of the past with its timeless charm and her present made of a mixture of dreams and fantasy. Among the objects represented with her women there is almost always the presence of a bird, most of the time a duck, which acts as a hat or as an accessory that accompanies the character.

These elements are not random but are the protagonists of a recurring dream made by the artist. Birds represent in the dream world the symbol of the soul, of the spiritual essence and often become almost magical presences, which suddenly appear as messengers of the link between the world and the personal ego. After having conceived the creative idea, Wilson relies on a group of trustworthy people who, knowing her, are able to interpret her thought, making it concrete in the reality of which she takes many photographs.

Photographs that in turn serve as inspiration because the final works, which she composes in her studio, are always something different from what the artist has photographed, something that she is able to narrate in an extraordinarily compelling way as part of her thought and which then continues, in a second phase of the process, in the mind of the viewer, with her way of perceiving the work and the set of emotions that it is able to provide her.

In her works she always starts from the representation from the head and the eyes because, she says: “…I need to know who I’m painting”, and proceeds at the same time, bringing one work to a good point and then dedicating herself to others: in this way she manages to detach the attention from a painting and recover an objective vision of the work. The works are all large in size and are extremely detailed in the description of the specifications, which is why they take a few weeks to complete. Another fundamental component in Wilson’s work are the titles that take shape as the work progresses and are an integral part of her narrative process: “They are like a poem to me, another way to express myself and add depth to the piece”.

Pamela Wilson started painting in her senior year of high school, but she has been drawing since she was three to four years old, says the artist: “I used to draw all the time, but I hated colouring. In coloring books, I couldn’t stay inside the lines like my older sister.” Having become a full-fledged artist, she then took up photography in black and white, lithography on rock and then returned to work on canvas, first in black and white, exploiting the oneiric effect that recalls past time, and then rediscovering the magic of colour in the right balance between colour and value is able to render the “soul” of the painting on canvas. “The knowing of when to use a lot of color, or to mute it, is a skill,” says the artist.

Wilson’s works are a beautiful combination of energy, personality and emotional content that can be intriguing, oneiric and sometimes obsessive. She believes that letting herself be explored by the “distortions” inherent in reality is part of what gives heart and balance to the work, just as the beauty of her characters takes on a profound meaning only if it is enlivened by the psychological component because: “The absurdities never end and the constant ups and downs of life strangely assure us that we are truly alive. Art is indispensable for our general well-being,” says the artist.

How can I blame her? How much truth in these words…