The Jewish Museum of Miami-FIU presents the Walking Canvas by Daniel Chimowitz, a volcanic mosaic of English, Basque, Japanese and Hebrew influences. 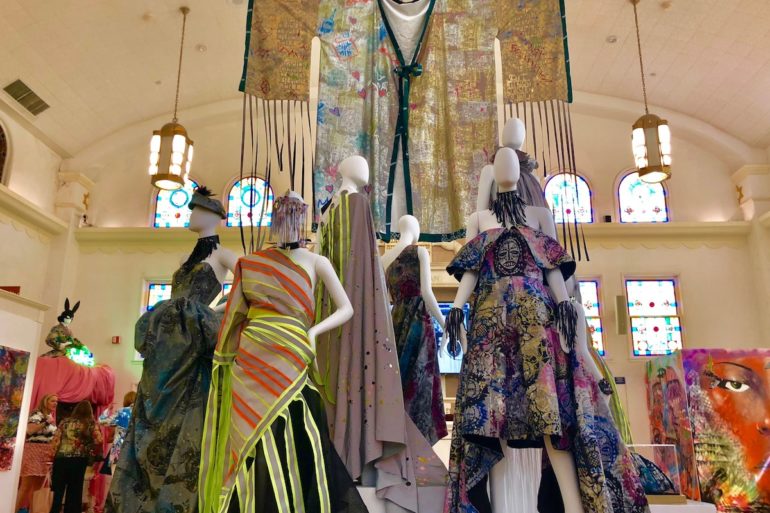 First museum exhibition for Daniel Chimowitz, mix media artist and fashion designer with a volcanic talent that combines art (he has made graffiti for seven years) and fashion. The exhibition opened on October 3 at the Jewish Museum of Florida-FIU in Miami Beach and will remain open until February 3, 2019. For all those who already know the potential of Daniel can only admire the exceeding of its limits, for those who, however, still do not know his artistic eclecticism will be able to realize his audacity by crossing the entrance door and gaping at the gigantic Jewish dress (used for special occasions) hanging from the ceiling as if it were a gesture of devotion to the entire collection, to which the museum and the story it tells are wonderfully framed.

The title of the exhibition is Walking Canvas, an incisive title that allows you to focus on the work of Daniel and enter his world, colorful, in which images, and silkscreen  are hand painted in a unique and exclusive way on their own or recycled garments. 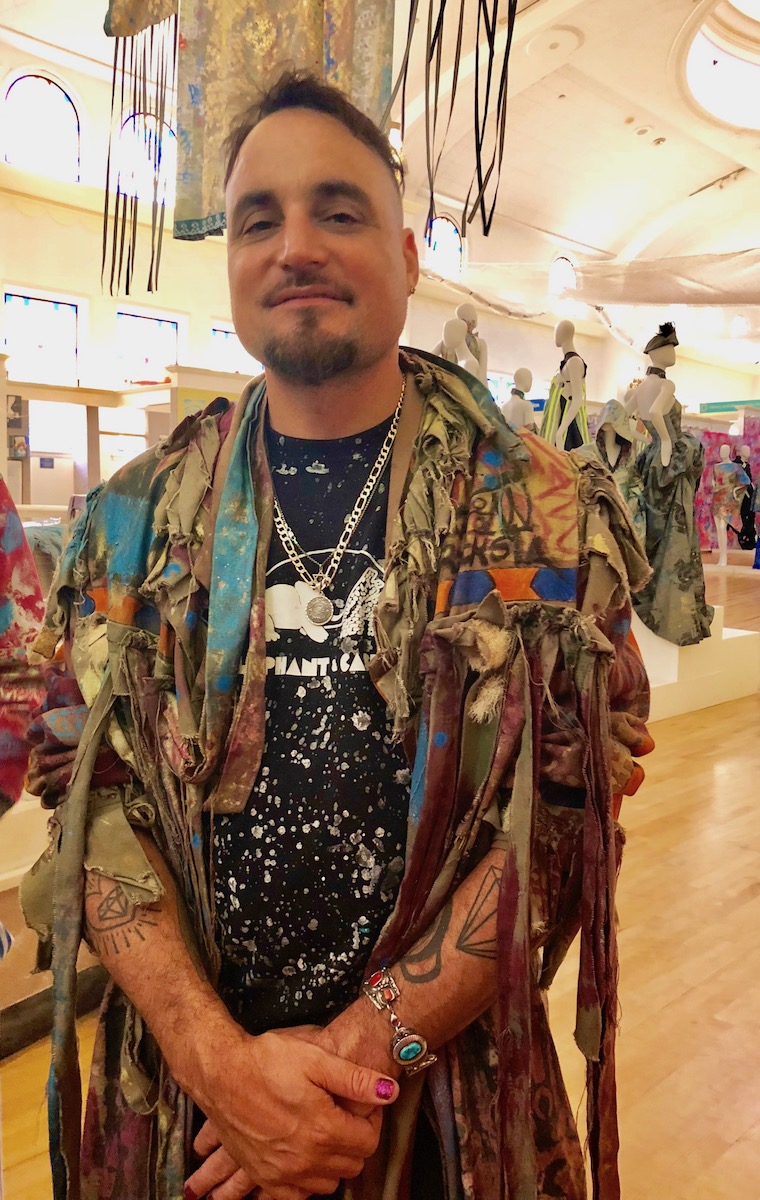 Born in London in 1976, of Jewish origin, Daniel Chimowitz lived in San Francisco in the emblematic Castro district known as the original neighborhood of the populous and active LGBTQIA community that has made itself a champion of the civil rights of the community worldwide.

He was born and raised under the aegis of two mothers, one of whom originally from Tlingit, a native American population of Alaska with Inuit cultural influences that have had a decisive impact on him both in the projection of the self, allowing him to grow free, without inhibitions and imposed limits, in close contact with the ancient ancestral roots both in terms of style influence made of simple lines permeated by circles and triangles that are visible in some of his creations.

After studying silkscreen and printmaking at the Mission Cultural Center in San Francisco, and at the Center of the New Renaissance in Gilroy he focuses on ideas and manual skills at the famous Central Saint Martins – University of the Arts in London. From that moment on, the world of art, graffiti, fashion, screen printing and silkscreen will be for Daniel a whole and will allow him to permeate his creations to develop an eclectic and transversal art form that is born of the arts primary visuals and materializes by combining with collages and interweaving of fabrics and prints, with the manufacture of garments made from recycled garments, and combinations of pieces of different and colored fabrics as a unique and unrepeatable canvas with the use of golden, silver and fluorescent colors, spread with the use of timbres, serigraphs and stencils with pigments of various kinds. 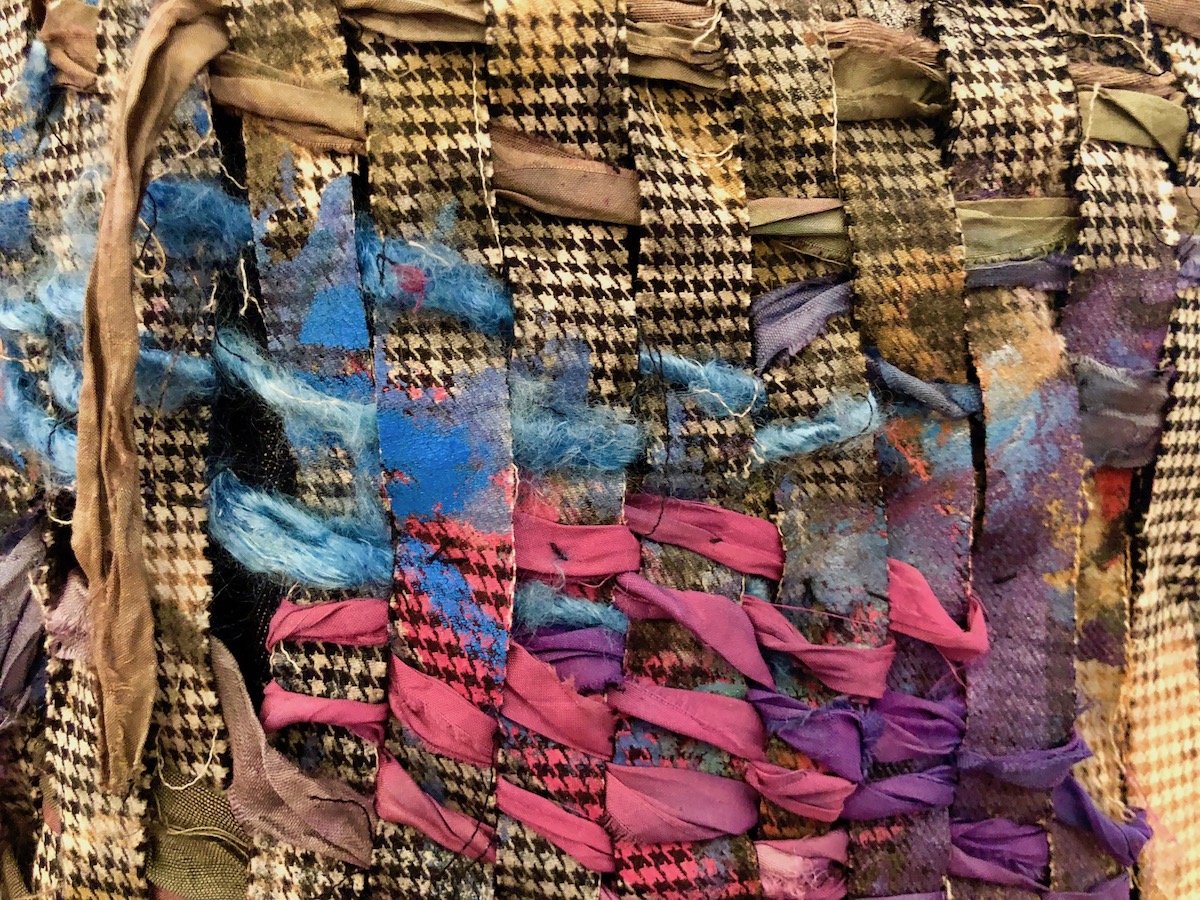 In addition to the studies that allow him to refine manual skills and ideas, traveling leaves an indelible mark on his way to make catwalk art. In London he comes into contact with the punk whose DIY poster, Do it yourself, initially born as a counterpoint to the mass approval as a revolution against the major record companies, which then was part of all sectors, including fashion that will be enriched with pins, studs and patches. The stay in Spain matures the interest for the figure of the matador who with his regal posture and his way of wearing the chaquetilla, the taleguilla with their rivets but especially the traje de luces, conquer him to the point of getting inspiration and “illuminate” his creations not only with the original sequins of which are composed of traje de luces, but with special optical pigments that under the effect of the photographic flash give unexpected surprises transforming colorful dresses in black and white with an amazing effect. 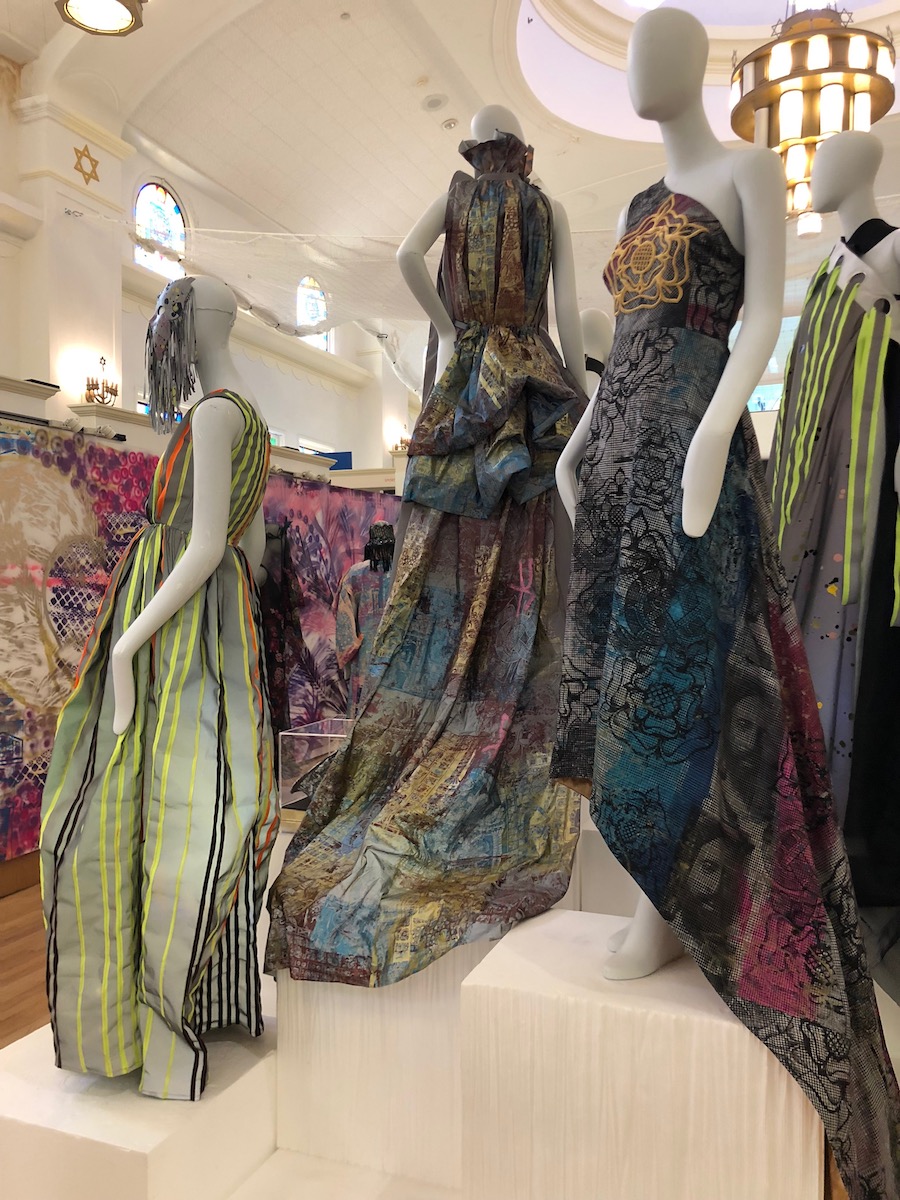 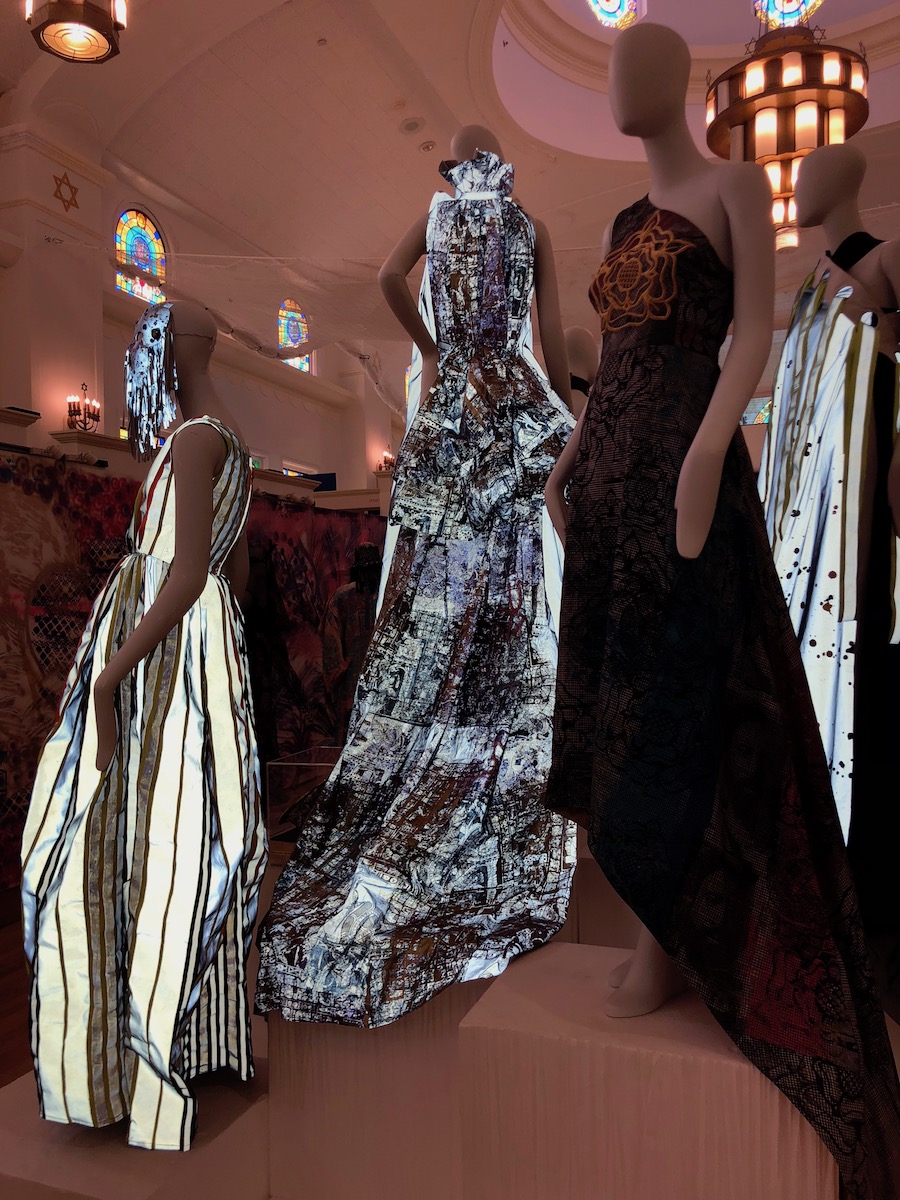 Daniel’s art, also explores his Jewish heritage and can be found in the finishes of the clothes for which, for example, the decorations around the neck represent the plates that Moses gave to the Jewish people with the 10 commandments, details that can escape to an unintended eye. 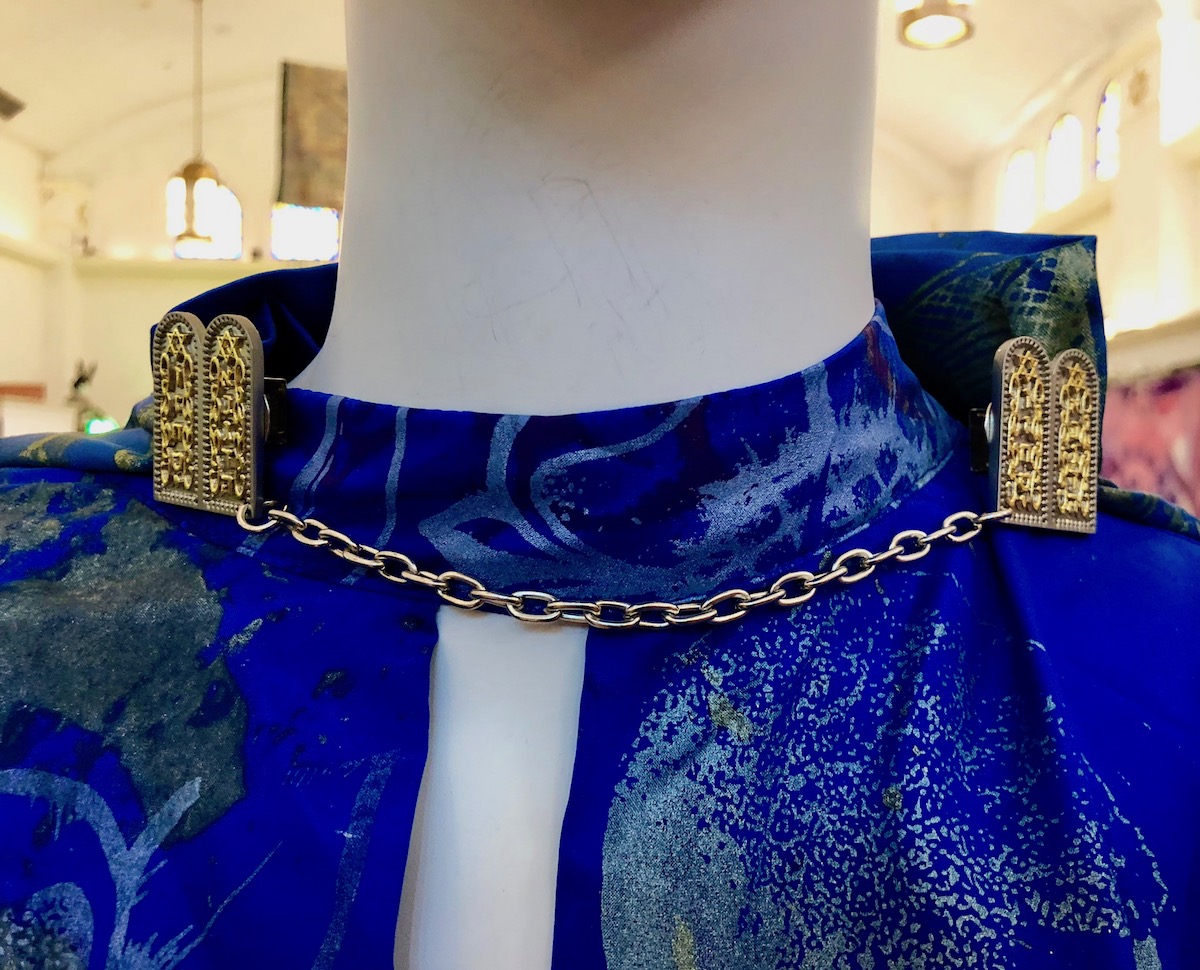 And while his creations ride the catwalks of Paris, London, Beijing, New York, Los Angeles, Las Vegas, San Francisco and Miami, Daniel’s research does not stop at European stimuli, he crosses them and here comes his hands in the kimono, wonderful national costumes of the Land of the Rising Sun that he manages to rework with sober tones, embroidered with serigraphs and silkscreen but with colored finishes in the wide sleeves that contrast sharply with the basic tones. 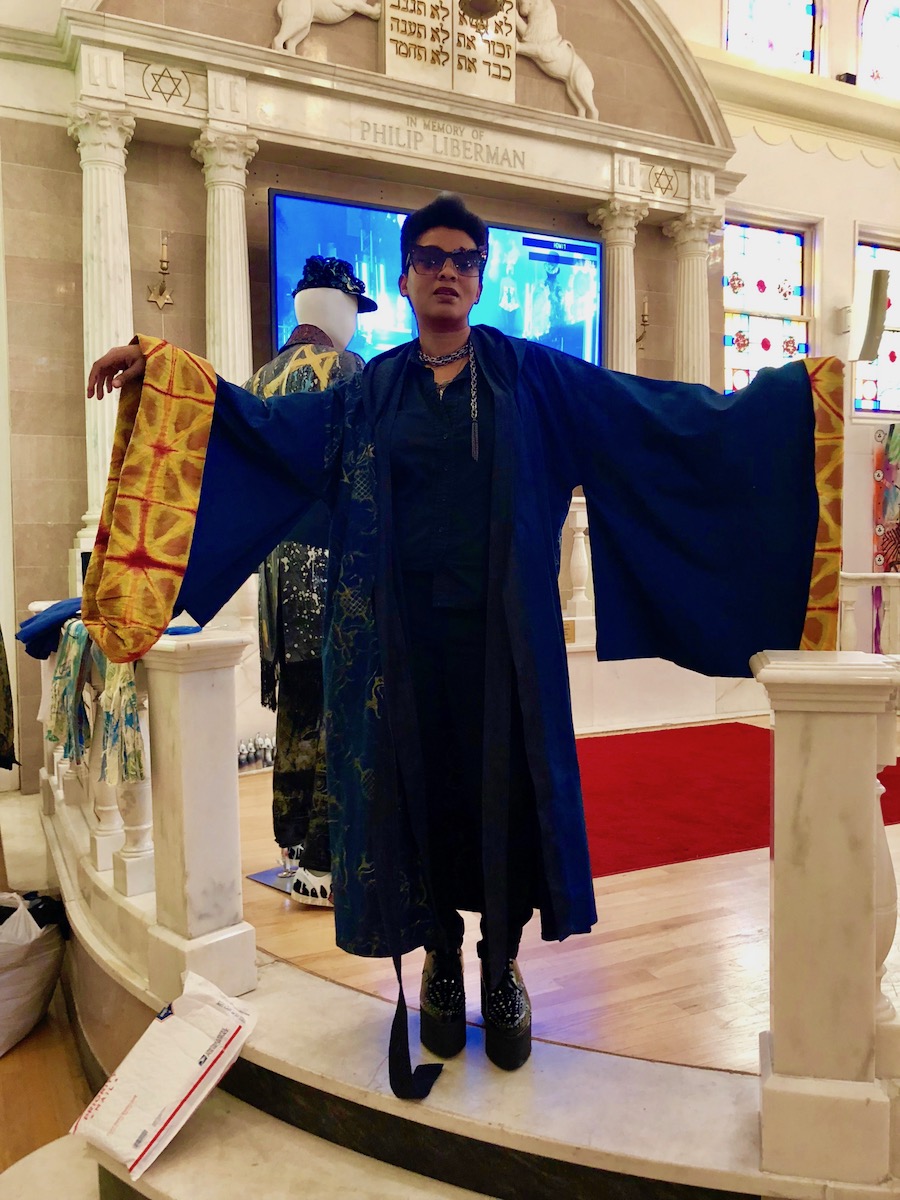 Remarkable the piece he made me wear during the party, a beautiful blue kimono. Being his creations the extension of his self, Daniel loves to dress his audience with his creations according to personal taste and analysis of the subject in front of him because Daniel just like that: a volcanic mosaic composed of a thousand different cultures that erupts in an absorbing way mixing color and technique and making innovative a piece of tradition, whatever it might be: English, Basque, Japanese or Hebrew. The important thing, as he says: “It is knowing how to take the risks of being yourself dressing in a free way and free to be the warriors to whom he has provided the weapons”. 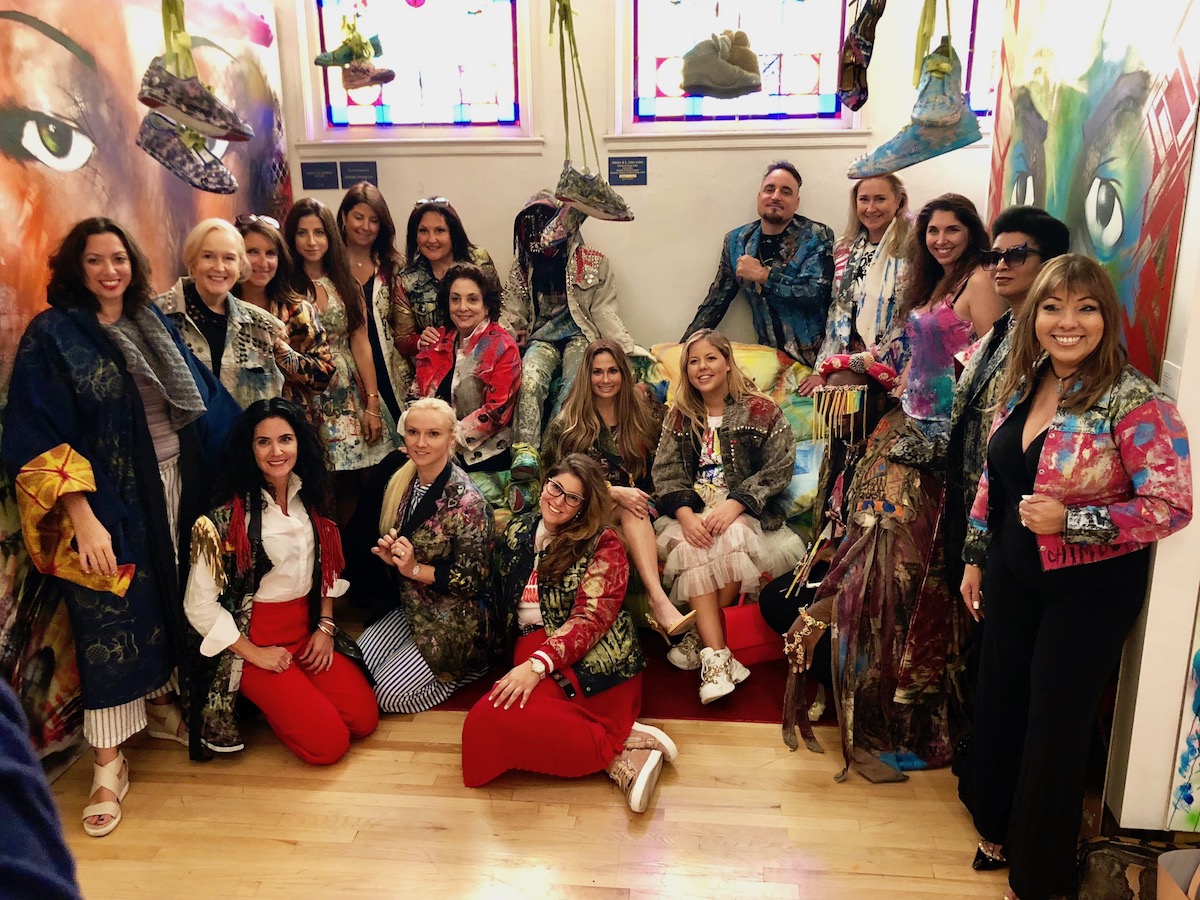