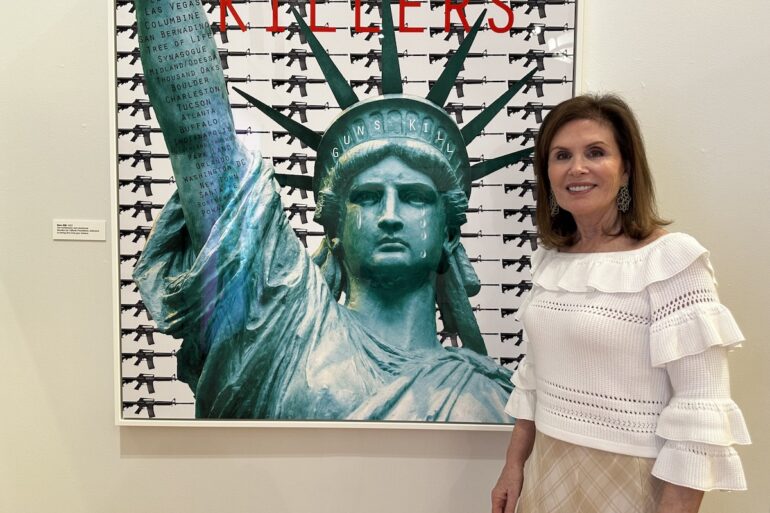 The Jewish Museum of Florida-FIU, celebrates the Miami Art Week with a retrospective devoted to photographer Bonnie Lautenberg, curated by Jacqueline Goldstein and with the blessing of director Susan Gladstone Pasternack, who said,”Our museum is thrilled to premiere this retrospective of Bonnie Lautenberg’s images of women illuminating freedom.”

On display are two decades of photography, told through the eyes of an aspiring actress who was married to a prominent senator and discovered, through a combination of fortuitous events, a passion for photography that became a job in its own right. Her work is now celebrated in some of the country’s most important museums and institutions.

The exhibition at the Jewish Museum of Florida is meant to be a tribute to Lady Liberty, a symbol of American freedom and a symbol of revolutionary America, which is rendered by Lautenberg through the all-female images of proud and irreverent, courageous and headstrong women who were able to both make their mark in the American history books and ride the stages of the world music scene.

This is followed by photographs taken in “carpe diem” mode of a number of musical celebrities admired by Lautenberg for their “irreverence”: from Lady Gaga in “Triple Gaga,” to Katy Perry in “Star Spangled Touch” and ending with Miley Cyrus in “Spitting Image,” which are part of the celebrated Pop Rocks series.

Contrapposed  with the musical heroines of the century there is Harriet Tubman, the woman who personally fought for the abolition of slavery. Harriett Tubman is the protagonist of the her latest work called, “Wanted”(2022) : a combination of real historical images, and the cinematic image of actress Cynthia Erivo, star of the film of the same name, which Lautemberg puts into dialogue in her signature style.

“Wanted” is just the latest production by the artist, who has created an entire series titled “ARTISTIC, Art Meets Hollywood,” dedicated to the marriage of film and art production.

Compounding analogies, Lautenberg recreated digital images composed of a movie scene from a famous film and an artist’s pictorial work executed in the same year of the film’s production. It was a process that the artist thought was fun both because of the search for the common thread that connects the works and because of the desire the work arouses in viewers to search for its sources. If some of the cult films are proposed in the film selection, the choice of artists falls, with few exceptions, on the protagonists of Pop Art: the artistic current of which Lautenberg is also an avid collector.

Here then, for the ARTISTICA-Art Meets Hollywood series, they sport on the museum walls, works such as: the famous The Wizard of Oz (1939), with Judy Garland, paired with Pablo Picasso’s With Blue Hat and Red Ribbon; the enigmatic, Suddenly Last Summer (1959) with Elizabeth Taylor and Mongomery Clift, paired with the hypnotic work, Zambezi by Frank Stella; or the more recent Eternal Sunshine of The Spotless Mind (2004), starring Jim Carrey, Kate Winslet and Kirsten Dunst-matched with Marilyn Minter’s opera Scrumptious, to name a few.

In a frugal nod, the exhibition picks up the CUBA series, with the sinuous moves of Cuban rhythm in Vision in Green (2015) and the faces, known and unknown, that lead the viewer through the Brief Encounters series. A multitude of characters come to life in this series: through the wrinkles of an Italian grandmother, celebrated by the artist as : “This is the Coolest Lady I saw in Italy I traded this Image with My Dermatologist for Botox” (2013) to a relaxed and infomal Hillary Clinton in “Hillary Clinton, Senate Retreat” from 2004.

Finally, as if celebrating at the same time, the greatness and the havoc of America poised between the freedom exuded by the past and a present uncertain of ideologies and values, there are images of her, Lady Liberty: the quintessential American symbol.

A symbol that is uniquely repurposed in the personification of American values that seem to be getting out of hand today. Among the works dedicated to Lady liberty there are: Even Lady Liberty Lost Some of Her Freedom (2020) which represents a trilogy in which the stark splitting of the colors of the American flag of the background are found united to decorate the mask, so dear in times of pandemic and to limitation not only of freedom of speech but of existence. The tear-soaked face of Lady Liberty in Tears of Roe (2022) harks back to the Supreme Court’s recent abolition of the sentence Roe vs Wade ruling, established on Jan. 22, 1973, by which the U.S. Constitution conferred the right to abortion. Finally, in Gun Kill (2022), the image of Lady Liberty with her face marked by tears is associated with the armed massacres tearing American society apart: with the name of the massacres perpetrated over the years, on the arm holding the torch Lady Liberty emerges from a background composed of guns, nonetheless strong in her hope for a better future.

In addition to the retrospective dedicated to Bonnie Lautenberg, the Jewish Museum of Florida-FIU presents the exhibition “Environmental Art: Fragile Beauty,” featuring installations by Beatriz Chachamovitz, Lauren Shapiro and the extraordinary Mira Lehr, whose works, made from multiple and different materials, convey the elegance of aquatic ecosystems. The exhibition references the key principles of Environmental Art, a term coined in the late 1960s by a number of artists who sought to raise awareness of the beauty of nature in tangible ways, taking art to the next step beyond simply illustrating landscapes.

Finally, the exhibition, “LA ALEGRÍA DE VIVIR: A Moment in Venezuelan Jewish Life Through the Eyes of Silvia Cohen,” showcases a series of colorful paintings made by the artist from black-and-white images of family members and acquaintances with which she chronicled life in Venezuela in the 1950s and 1960s.

(on the title: Lady Liberty, A Bonnie Lautenberg Retrospective at The Jeewish Museum of Florida-FIU)

MiamiNiche selfie with Starchild, the magnificent

Goya’s artwork has it all: aesthetics, political

Tonight you are invited for the Open House, and

Portrait of a Cowboy Artist by Michelle Dunaway. O

The Villa of Masterpieces, the Magnani-Rocca Found

On the occasion of Miami Art Week, Oliver Sanchez