The interaction of man and nature at the Nevada Museum of Art in Reno, Nevada. 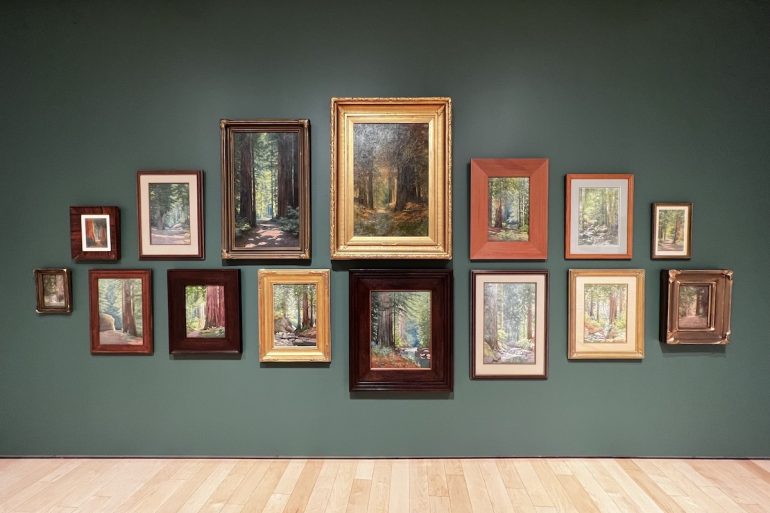 The Nevada Museum of Art, is housed in the Donald W. Reynolds Center for the Visual Arts in Midtown Reno, “The Biggest Small City in The World,” as the iconic sign reads, and is Nevada’s only art museum accredited by the American Alliance of Museums (AAM).

Housed in the large building designed by William P. Bruder Architect Ltd, by the homonymous celebrated architect, the museum references the geological formations of the nearby Black Rock Desert and, in addition to being an educational resource, serves as a visual metaphor for the institution’s academic focus on art and the environment, given its geographic location.

The building features an imposing titanium/coal-black structure, -ANTHRA-ZINC- that exaggerates its shape. ANTHRA-ZINC is pre-patinated zinc, a material made thirty years ago by the company VMZINC to coat flashings and downspouts for slate roofs. Over time, this visually striking material has also been used by architects to decorate wall facades.

The museum, which boasts 70,000 square foot on four levels, is considered one of Nevada’s most important architectural achievements. The museum’s permanent collection is divided into four thematic areas: the Carol Franc Buck Altered Landscape Photography Collection, The Robert S. and Dorothy J. Keyser Art of the Greater West Collection, The Contemporary Art Collection) and The E. L. Wiegand Work Ethic in American Art Collection. In addition, the Center for Art + Environment Archive Collections and Library -housing more than 130 archives consisting of more than one million objects and over 7,500 books- serve scholars and researchers by providing them with information related to the creative interactions between people and their natural, built and virtual environments.

At the entrance of the building is the large site-specific mural created in 2019 by Reko Rennie, titled: “Always Was Always Will Be”,which the artist created drawing from his Australian ancestry combined with graffiti art. Through repetitive design elements and camouflage, the artist emphasizes how Aboriginal Australians have had to hide and conceal their identity.

On the occasion of the celebration of 90 years since its founding, the Nevada Museum of Art has set up the exhibition: “The Latimer School: Lorenzo Latimer and the Latimer Art Club.” The exhibition brings together the landscape paintings of the watercolorist Lorenzo Latimer, alongside those of the artists he mentored and who founded, one hundred years ago, the Latimer Club, which is still active. Among them: Mattie S. Conner, Marguerite Erwin, Dora Groesbeck, Hildegard Herz, Nettie McDonald, Minerva Pierce, Echo Mapes Robinson, Nevada Wilson and Dolores Samuel Young.

The Latimer Club was the predecessor to the Nevada Art Gallery, which was joined by climate scientist, humanist, and art lover Dr. James Church and later became the Nevada Museum of Art. The institution is named after the painter, San Francisco native, Lorenzo Latimer, who first visited Fallen Leaf Lake on the south side of Lake Tahoe in the summer of 1914. From there he began giving annual plein air painting classes. In 1916, he was invited by two students to teach a painting class in Reno and returned for the next twenty years. Latimer and his students’ watercolor paintings of Truckee Meadows, Washoe Valley, Lake Tahoe, and Pyramid Lake are central to the history of Northern Nevada’s outdoor painting tradition.

On the subject of the environment, it’s no surprise that in 2016, the Center for Art + Environment at the Nevada Museum of Art acquired the archive of Gianfranco Gorgoni, an Italian-born photographer who passed away in 2019 and was known as Land Art’s leading documentarian.

Gorgoni, who came to America with the intention of staying for a short time, has lived in the United States for most of his life after meeting Leo Castelli who introduced him to artists such as: Michael Heizer, Robert Smithson, Nancy Holt, Walter De Maria, Carl Andre, Joseph Beuys, Richard Serra, Christo and Jeanne-Claude. Born as a portraitist Gorgoni was the first photographer to collaborate with these artists making work in the American West and his images often served as the definitive photographic documentation of their groundbreaking projects: the Earthworks of the 20th century.

On display with the summary title of, “Land Art Photographs” are over 50 large format works by Gorgoni, including: Running Fence, by Christo and Jean-Claude; Spiral Jetti, by Robert Smithson; Roden Crater Low Aerial Oblique Looking Toward N.E. by James Turrell; and Seven Magic Mountains by Ugo Rondinone.

Gorgoni has fixed in his images the greatest Land Art artists, who have interacted with the nature and the indigenous populations -only the state of Nevada is composed, at the federal level, of 27 indigenous tribes- in a completely subjective way: remarking it, interpreting it, manipulating it or simply creating works of art with the pigments that the land provides.

Also related to the theme of the environment is the exhibition, “Judy Chicago: Dry Ice, Smoke, and Fireworks Archive.” The artist, who had a major retrospective in 2019 at the ICA-Institute of Contemporary Art- in Miami, beginning in 1968 embarked on a series of ephemeral performances titled “Atmospheres” with which, using colored smoke and fireworks in the deserts of the American West, she sought to “soften the macho Land Art scene,” as she called it. A true critical counterpoint to the predominantly male Land Artists who worked in the desert during the 1960s and 1970s. This is in essence why the Nevada Museum of Art secured, in 2018, the acquisition of Judy Chicago’s entire fireworks archive for the Center for Art + Environment’s collection. For the exhibit, Judy Chicago covered an entire wall inside the museum with her signature colors.

Unfortunately, the snow that has fallen in recent days has prevented access to the sculpture garden on the building’s terrace and therefore visible only from the large windows. The sculpture garden is architecturally bounded by the edges of the building that rake up to the sky, where the syncopated rhythm of the battlements of the west parapet frames the city, the sky, and the distant view of the Black Rock Desert.

(on the title, The Latimer School: Lorenzo Latimer and the Latimer Art Club