The ICA Miami honors Yayoi Kusama with the installation of an Infinity Room: All the Eternal Love I have for the Pumpkins, on display until January 31st 2020. 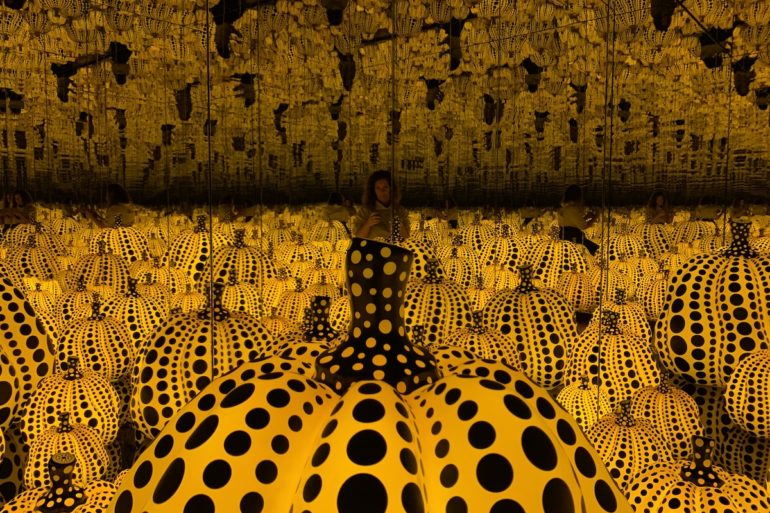 While a new Infinity Room is expected at the David Zwirner Gallery in New York for which 100,000 visitors are expected, the ICA Miami, thanks to the support of Inigo Philbrick Gallery, has opened its doors to the installation Yayoi Kusama: All the Eternal Love I have for the Pumpkins. The installation that is part of the Infinity Mirror Rooms series, is a branded creation of the famous artist: an infinity of pumpkins in an immersive environment that intensifies the perception of the senses, producing an illusion through the use of mirrors. The installation, for a fee also for museum members, and isolated from the museum headquarters, will benefit the ICA educational programs, while admission (which can be booked online with the exception of Thursday, which is free) includes admission of one person at a time for the maximum duration of one minute.

The large-scale installation is based on the elaboration of the Mirror Room (Pumpkin) of 1991, commissioned for the Japan Pavilion at the 1993 Venice Biennale: the environment is completely orange with black spots (the spotted gourd) reflected on a central cube entirely in mirror. In All the Eternal Love I have for the Pumpkins (2016) there is an inversion: it is the surrounding environment that is covered with mirrors while inside are placed gourds internally illuminated that are reflected to infinity.

The infinite, the sublime and the obsessive repetition of symbolic forms are the elements that make up the art of Yayoi Kusama and her Infinity Mirror Rooms which debuted in 1965 and which inevitably refer to her childhood: she was just a child, in fact, when following hallucinations, she saw the dense environment of points which she later fixed on canvases, walls and sculptural objects, spending whole days, from morning to evening, obsessively repeating this elementary form which represents for her the basic element of which she is composed. Cosmic energy. It is always as a result of childish hallucinations that she finds benefit and comfort in her grandfather’s pumpkin plantations, where she indulges in the most extravagant visions that she painted on canvas, making pumpkin, especially in her sculptural phase, one of her favorite and recurrent subjects for which she will be recognized. Having become an adult she decides to rebel against the family that had planned for her a future as a housewife and moved to New York to devote herself to art. After several years of activism and production, she voluntarily decides to return to Matsumoto to be interned in a mental institution. To this day she lives in the nursing home and works in her studio which is a short walk from the hospital, followed by a team of professionals who help her in the realization of the works.

A difficult life and a belated success. It was only in the 90s that she received the approval from the longed-for art world she always wanted to be a part of and that she will consecrate in the international art scene, exhibiting her works in museums and galleries around the world, alongside the works of Andy Warhol. In 2018 her autobiographical book “Infinity Dots” was written, followed by the documentary film, proposed in Miami in Wynwood’s O’Cinema, now closed. (For more details see the Miami Niche article of September 21, 2018: The obsessive-compulsive angst of Yayoi Kusama between points and nets in a race against time, the maternal one.

The installation is a great opportunity to be able to immerse yourself in the hallucinated, dreamlike and obsessive world of Yayoi Kusama, where, despite the difficulty due to the illness, the happy end of the character was nevertheless guaranteed in the long journey of the history of art. The only negative aspect of the installation exhibited by ICA is the time spent inside the Infinity Room: a minute is really too little to realize the magnificence of the installation.