The Goldman Global Arts in Miami inaugurates Kobra’s first solo show in the States: when the social message becomes “Larger than Life” – part II, in the colors of Eduardo Kobra. 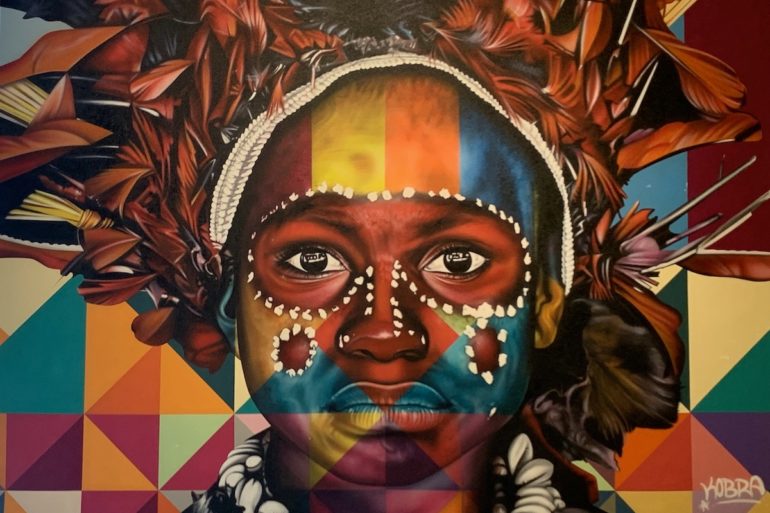 Within the walls of the Wynwood Wall, Goldman Global Arts celebrated the event exhibition for Kobra collectors and enthusiasts, entitled Kobra – Larger Than Life-part II: the first personal exhibition of the Brazilian artist in the States. Open for some time, the exhibition will close its doors after the second week of November. The exhibition, curated by Peter Tunney in collaboration with Goldman Global Arts, displays unique works created on canvas that have never been seen before. Some of which are inspired by the homonymous murals created over the years by the artist.

The works, many of which have been sold, have prices ranging between $ 45,000 for Karo Girl, 2019, from Ethnicities series (also available in limited edition print with the artist’s signature, for a value of $ 3000 / $ 3500 the framed version) and the $ 100,000 for Ziggy Stardust (from the murals made in Jersey City, US in 2015) and King Basquiat both from 2019, respectively a tribute to David Bowie and Jean Michel Basquiat.

Among the various works on display are both key figures of social importance for the message of peace they have transmitted to the world (Mandela, Mother Teresa – taken from Peace, painted in Sao Paulo in 2018 – and Muhammed Ali, Gandhi), and figures that have played a historical importance for their contribution in the arts (Miles Davis, Tupac & Notorious Big and Ray Charles – from a mural performed in São Paulo in 2015 – for music, Frida and Diego and Pablo Picasso for the arts visuals and Einstein on the Beach for science). Then there are works of social significance (OriGUNmi, American Dream, Man on The Moon, Peace Poste, Coexist) and works taken from Ethnicities (Kayapó Boy and Goroka Boy or Chinese Girl – taken from Ethnicities and painted in Miami on the occasion of Art Basel 2018) and finally some works that recall previous works, such as: Ballerina, Baiana, Maracatu (taken from Rhythms of Brazil, painted in Tokyo in 2015), Ballerina II and The Kiss. The works that are part of the Ethnicities series, and produced in collaboration with the British photographer Jimmy Nelson, who spent thirty years of his life immortalizing indigenous cultures around the world in hope that the world could learn to love and respect the earth as they do, are personally, his great masterpieces: faces adorned with folkloristic ornaments that leave the observer speechless.

In the last thirty years he has created over 500 monumental murals across five continents, in over 40 countries including Italy, Spain, Norway, England, Malawi, India, Japan, United Arab Emirates and the United States: New York City, Chicago, Los Angeles and Miami.

The artist is known all over the world for his distinctive style that uses bright colors and bold lines remaining faithful to the kaleidoscopic theme that makes his work absolutely recognizable. The chessboard repetition technique of squares and triangles, rich in nuances due to the skillful use of brushes, airbrush and spray cans, allows him to characterize the famous characters he portrays in his Larger than Life images. The characters are not chosen at random, but have an important caliber in relation to the social impact they had in the world (some examples are: Gandhi, represented on murals in Mumbai in India or Mandela in Malawi, both in 2017) or specifically in a particular place (Rubistein, in Lodz in Poland in 2014 or Alfred Nobel, in Boras in Sweden in 2014).

Inspired by a life focused on sharing humanitarian messages that also highlights environmental concerns Kobra is at the forefront of good causes: Greenpeace, world peace, pollution. Topics that he treats with particular care to convey his message of peace through his art, which according to Kobra represents the social medium through which to spread messages of peace, love and hope, citing as examples the characters who made it their life’s mission to become world reference points.

Born in Jardin Martinique (1975), one of the poorest neighborhoods in the south of São Paulo, Kobra started as a kid to “smear” the walls of the school and the neighborhood. There was talk of vandalism then, when the practice of street art was still considered illegal, before it underwent the vertical development it had in the following years. Kobra was taken to jail three times, indicted for environmental crimes.

However, despite the vicissitudes of youth, the first paid job was not long in coming: it was the 1990s when he worked on the creation of posters and painted sets of toys and decorative images for the events of what once was  the largest amusement park of Brazil.

However it is in 2007, with the Wall of Memories that he begins to get noticed: Kobra becomes an avid researcher of images of the past of San Paolo in Brazil which he reproduces on a large scale in sepia and black and white with some elements of color. Murals that serve, in addition to safeguarding the importance of places, also to reinforce the sense of belonging of its inhabitants.

While his first work outside Brazil is in Lyon (France, 2011) it is in 2016, the year of the Olympic Games in Rio de Janeiro that Kobra performs the audacious work of depicting five faces, Ethnicities, representing the five painted Olympic circles on a wall in a formerly dilapidated area of ​​the city. A world record for the largest mural created by a single person on a 620 ft long wall with a height of 50 ft for a total area of ​​almost 32000 square feet. A record surpassed only by Kobra himself in the same year, when he produced the commissioned Cacau Show for a well-known Brazilian chocolate company, represented on an area of 61000 square feet.

Among his most famous works is The Kiss of 2012 (removed four years later) in New York: a reinterpretation with his play of colors of the famous image of Alfred Einstein of 1945 in which a soldier kisses a passer-by while the people take to the streets to celebrate the end of the Second World War. Eduardo Kobra is today one of the most popular street artists due to the surprising style of his art: hyper-realistic images, often based on photographs of characters such as the Brazilian architect Oscar Niemeyer (2013), the Spanish artist Salvador Dalí (2017) and the Brazilian musician Chico Buarque (2014), covered with strong and contrasting colors. Eduardo Kobra’s ability is to keep himself a photo-realist artist while using the playful chromatic theme that creates a surprising contrast with its surroundings, whatever it may be: whether it’s Wynwood in Miami (Tupac and Notorius Big, 2013) rather than Amsterdam in the Netherlands (Anne Frank, Let me be myself, 2016), in the cold Moscow, Russia (Ballet Dancer, 2013), on the Carrara marble quarries in Italy (David, 2017) or in the crumbling areas from São Paulo do Brazil (Rational, 2014).

Among his most recent works is the tribute to Ayrton Senna at the Checco Costa Imola Museum in Italy: a surprising work 69 feet long and 23 feet high, which celebrates the place of tragedy where the legendary Brazilian pilot lost his life on May 1st, 1994.