The FRIST Museum in Nashville and the art of J.M.W. Turner. 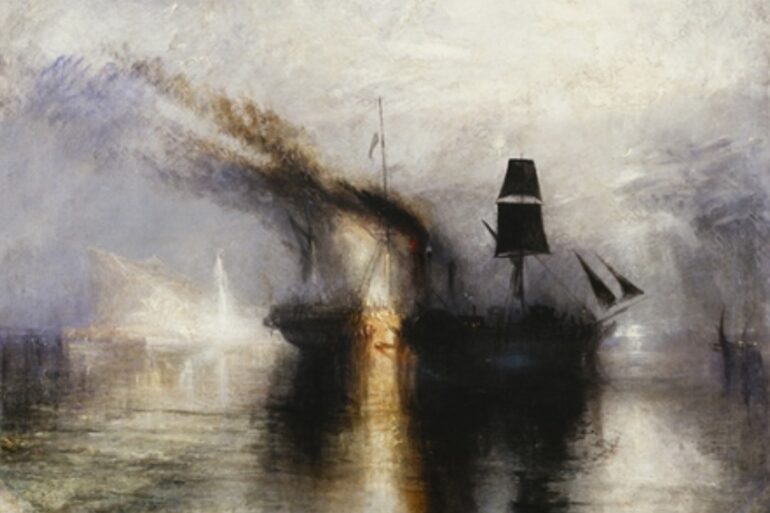 While the various museums in Miami and Fort Lauderdale reopened after the long closure due to the Covid-19, the FRIST Museum in Nashville closed the doors of the exhibition “Quest for the Sublime”, which focused on one of the greatest and most recognized landscape painters of the West: Joseph Mallord William Turner (1775-1851). The exhibition presented oil paintings, watercolors and evocative sketches by one of the greatest artists of English romanticism. The pieces of the exhibition were selected by Tate’s Turner Bequest: the largest donation of works of art ever made to the National Gallery consisting of almost 300 oil paintings and about 30,000 sketches and watercolors, including 300 drawing albums, bequeathed by the artist in his will, which also included two anticipatory clauses to the bequest. In fact, the artist wanted his works to be preserved all together and two of his works “Dido building Carthage” and “Sun Rising through Vapor” to be preserved next to “Landscape with the Marriage of Isaac and Rebekah (The Mill)” and “Seaport with the Embarkation of the Queen of Sheba”, works by his inspirer and “competitor a posteriori” Claude Lorrain. After several vicissitudes, including a dispute over the inheritance by the grandchildren, several battles, including Waterloo and numerous relocations, since 2011 the artist has partly restored the conditions for which Claude Lorrain’s works and Turner’s works are preserved together at the National Gallery.

The importance of Turner in the history of English art has led the artist to be remembered with the Turner Prize, the prize awarded by the Tate Gallery to the artist, under fifty, who is believed to have given significant value to English art. This prize has not been awarded for three years now for reasons of the significance of contemporary art compared to Turner’s art.

Born in Maiden Lane, Covent Garden, London, to a modest J.M.W. family. Turner has lived in London all his life even though he travelled a lot (well above the average of the time) and always alone, both for England and Europe, stopping especially in Switzerland and Italy. The landscapes of the Alps aroused a strong interest in him that influenced him throughout his life. Alpine landscapes were in fact among the favorite subjects represented by two French artists that Turner admired: Nicolas Poussin and Claude Lorrain. Lorrain in particular established in Turner a sort of love-challenge that inspired him in the realization of several works with which, at the same time and without ever having publicly declared it, he instituted a personal challenge in the realization of works that could be even more fascinating in comparison.

J.M.W. Turner was a painter, and watercolorist of the romantic era, the artistic current, which focused on emotion and it was born in response to the emphasis placed by the Enlightenment on reason. Moreover, the emotion is visible in his works from the expressive use of color, to the imaginative landscapes and especially in the turbulent and often violent seascape paintings. His landscapes have in fact changed the fortunes of landscaping art, arranged according to the hierarchy of art imparted to him by Joshua Reynolds -master of the Royal Academy of Arts in London-  in the background along with portraiture and still-life because they were considered “mere transcription” of reality, unlike the historical paintings that documented historical, literary, biblical and mythological events and were considered as the pure essence of art. The Royal Academy of Arts in London played a key role for Turner, who studied and exhibited his work there on a regular annual basis. For the works that were “discarded” by the Royal Academy he had established a personal gallery in which he exhibited and sold his works to different private collectors (and from whom he later bought back the same works, in order to have a greater legacy to offer to the National Gallery). J.M.W. Turner was able to demonstrate through his artistic career that a landscape painting can have the same complexity and expressive power as historical paintings.

The artist was very shy and solitary and it seems that among the reasons that led him to be very reserved were his mother’s mental illness and the fact that, having entered the high nobility, showing his poor origins was a source of shame for him. After all, however, J.M.W. Turner had begun to exhibit in his father’s workshop, who was proud of his son and later became his helper and handyman. The store where he sold wigs was located near an area full of architectural firms and Turner ended up working in an architectural studio: his watercolors acted as the current rendering for potential customers who could have a clearer idea of the completed work. He learned so well the architectural design that his works were continually in demand and he himself began to include architectural works in his paintings immersed in the luxuriant nature of England, the same landscapes celebrated by verses by William Wordsworth, rich in decadent architecture with a medieval flavor.

J.M.W. In his preparatory work, conducted between England and Europe, Turner reached the pinnacle of mastery in watercolor technique: he and others have brought this technique to the celebration and promotion of watercolor as a distinctly English “national art”.

He then began to work in oil, starting with the bases of the watercolor with which he made paintings in plein air, which he later reworked in his studio. Turner did not have a precise method with which to proceed: he simply added layers of color until he could not process the image he had in mind. To finish the image he used body colors, eraser, pen, ink and used the thumbnail to scratch the color until he found the white of the paper that was used to brighten the work. Travelling and coming into contact with the majesty of nature, the idea of the “aesthetics of the sublime” was born in him little by little. The aesthetics of the sublime essentially invests the relationship of man with nature but the concept of J.M.W. Turner is in opposition to the classical concept of “beauty”: for the artist as for the romantics, nature is not immutable and pervaded with calm greatness like that of neoclassical painters, but is shaken by an infinite destructive and creative energy at the same time, which transforms it incessantly;  to it corresponds in a mirror-like manner human nature, which is not arid rationality, but rather a tumult of feeling, instinct, passion. The aesthetics of the sublime is visible above all in his seascapes to which he was strongly attracted. 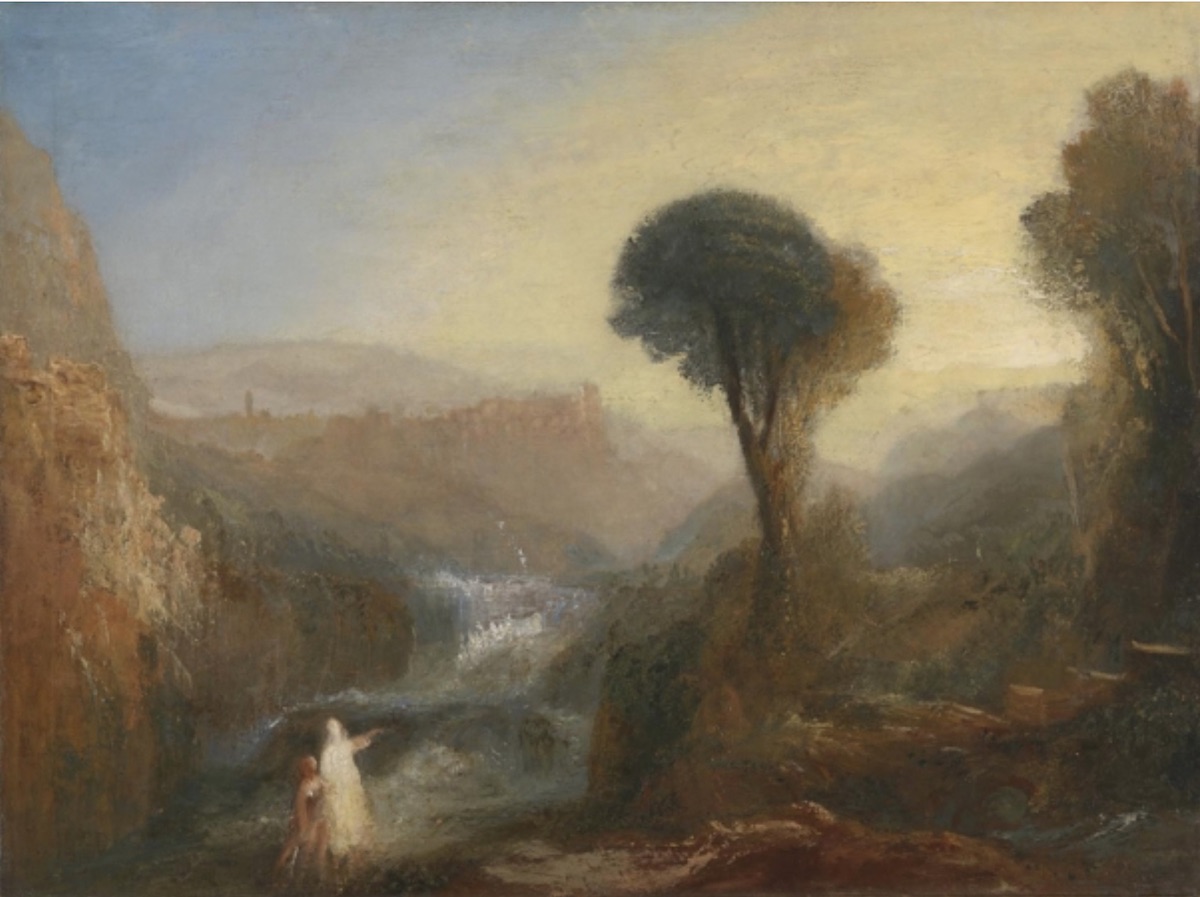 Tivoli, Tobias and the Angel, by J.M.W. Turner ca. 1835. Oil on canvas, 35 5/8 x 47 5/8. Tate accepted by the nation as part of the Turner Bequest 1856He became famous and began to collaborate with some publishers and engravers to produce a series of views, the first of these series was “Picturesque Views of the South Coast of England”, published in booklets. In addition to being an artist, having grown up in his father’s workshop, he was also a businessman and with his illustrations the books sold more consequently he was able to leverage the publishers with heavy clauses due to his fussiness.

Although most historians claim that Turner’s maturation occurred after his stay in Italy around the 1920s after his death many paintings and sketches were found, including some unfinished and color beginnings, which show how his phase began before his journey. Turner switched from his naturalistic landscapes in green and brown to yellow as the dominant color of the palette. For his watercolors he used for over 15 years a light blue paper that served as a perfect halftone for the shades of water and sky and that allowed him to use complementary colors in a totally new way, anticipating the Fauves (approx. 1905) by almost a century.

Turner’s mature phase consisted in the evolution of his personal style, as Titian had done, of which he was a fervent admirer. In particular, Turner stopped using outline lines in favor of color spots of different shades with which he represented the objects of the work. According to the art critic John Ruskin in this regard defined the work “Ulysses deriding Polyphemus” as: “The central picture of Turner’s career”, superior even to the work “The Fire of the Chambers of Lords and Commons”, October 16, 1934. Turner used to exhibit unfinished works that he also completed the basis of the works that surrounded the artist, eclipsing their colors with brighter colors, especially those of his contemporary friend and rival John Constable. Among the various themes addressed at the end of the days there is often the comparison between London and ancient Rome, a theme also hosted by the Royal Academy in which Turner took part. His most famous work in this regard is Juliet and the Nurse, dated 1836, in which the artist symbolically represents the drama “Romeo and Juliet” by Shakespeare, with a magical rendering of the use of colors. Poetics is also the representation of a steamboat destined for demolition at a time when trains had shied away from steamboats, in the work “The Fighting Temeraire tugged to her last berth to be broken up, of 1838”.


EN- “Diana and Actaeon with Pan and Syrinx" by V

EN-Fountainhead is pleased to announce the second

EN-Happy Easter with Norman Rockwell and his “Ea

EN- The article by Miami Niche in the journal of t

Third day of workshops for the Portrait Society of