The Fountainhead Residency: when national and international art are shared sitting at a table, the one at home. 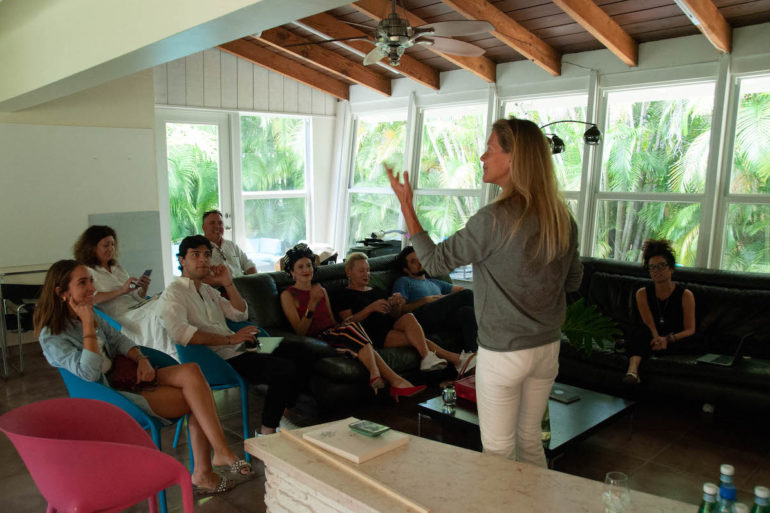 Among the artistic options that the city of Miami can boast, there is also the possibility of joining the Fountainhead Residency, a 1950s residence, a place to inspire and be inspired, completely immersed in nature, bathed in natural light that enters from the windows and perfectly inserted in the local community of which it is a part. Founded in 2008, the Fountainhead Residency is a non-profit company supported by the contribution of some benefactors, including the Knight Foundation and the Jorge M. Perés Family Foundation and directed by Kathryn Mikesell and consists of the provision of a home-studio in which, every month, three, four artists have the opportunity to live in sharing common spaces. A period in which to produce in absolute freedom, attending conferences, attending events, visiting museums, galleries and private collections. Besides all this, periodically there are meetings in which the guest artists make an excursus on their life experiences and their way of conceiving art.

The Fountainhead Residency welcomes both national and international artists and this month among its roommates there were the Colombian Ana Maria Devis, the Californian Asad Faulwell and the South African Tony Gum. 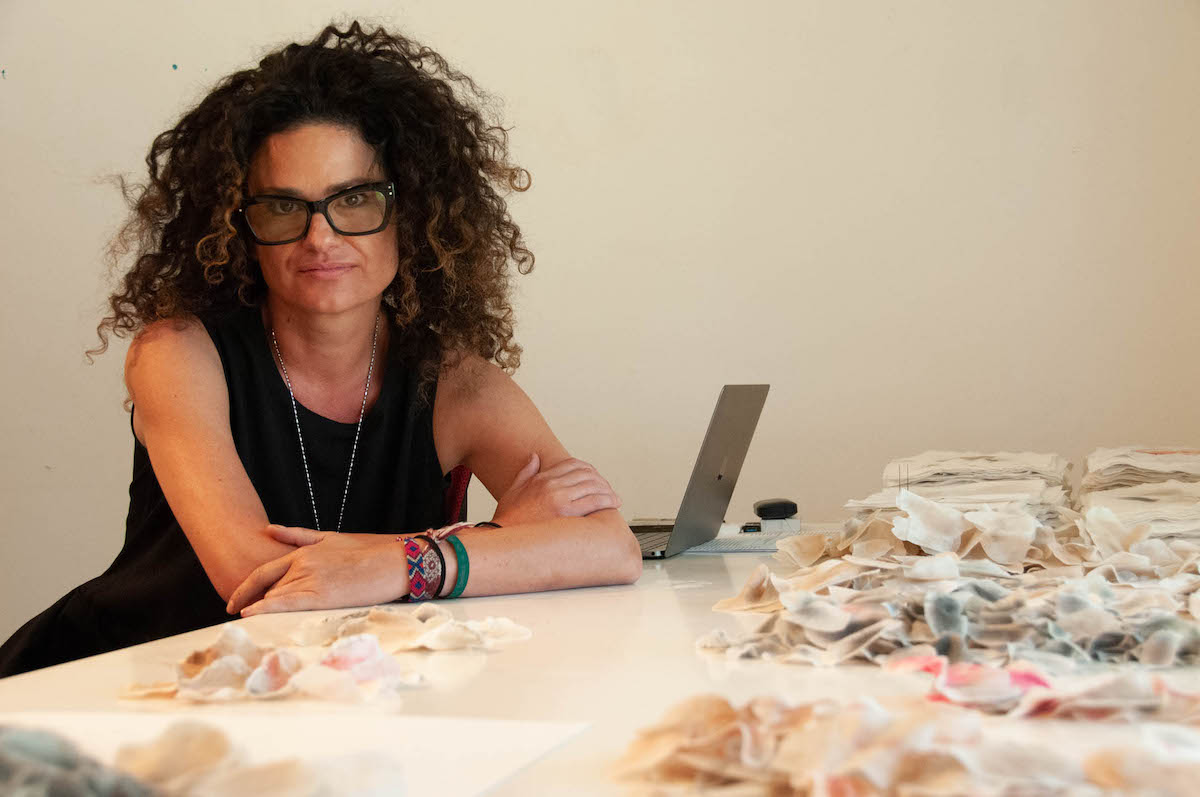 Ana Maria Devis, is a plastic artist, originally from Bogotà, with studies in etching and set design. She set her own artistic production after becoming pregnant with her first daughter, which was followed by a second one. Her concept of art is essentially linked to the concept of woman as a container: a distortion of perspective in which every mother and woman finds herself dealing more or less directly. She composed a pop-up book in which this concept of woman-container takes on a meaning that goes beyond personal perception, combining anatomy with appeal, in illustrative composition, to fashion. A multidisciplinary artist, her works range from drawing to painting, from video installations to photography and incorporating elements of anatomy, archeology and biology. Mixing the disciplines is not a new thing for Ana Maria who considers art a means to exploit to the ninth degree: for the contemporary art studio based in Bogotà, the Flora Ars + Natura, has composed a large drawing with of rubber stamps (made by her) in which she combined the hairstyles of the African people Palenque (settled on the Colombian coasts) with the typological models of fingerprints, with which she created a sort of large escape map from slavery. In 2016 she worked on the La Mujer Tortuga project, a project that required her 3 years of commitment, during which she dissected the turtle carapace (previously dead) that dissected and studied asking 70 women to think about what they would put if had been their home. On the basis of the feed-backs obtained, she created drawings made live in the studio-window visible to the public that was transformed into an archaeological laboratory becoming a real social catalyst: the means that connects the artist’s two-dimensional work with the action -reaching the spectator. The production of images is the narration of deconstructed and reconstructed entities through the experience of first-hand knowledge. Among the last works of Ana Maria Devis, Second Skin, the artist used some used make-up remover handkerchiefs (collected for over two years) and colored them with tools of daily make-up, lipstick, mascara, foundation, which she then cut out as they were petals. She combined them with real and synthetic hair, as is the tradition of the South American populations, making the trace of our being like a map, a matrix through which to reconstruct the stages of our existence. The make-up remover handkerchiefs become a piece of our being and with their assemblage she has created a glove to wear. Shas also made sketches of clothes to wear for the note like a second skin: a common thread between present and past. 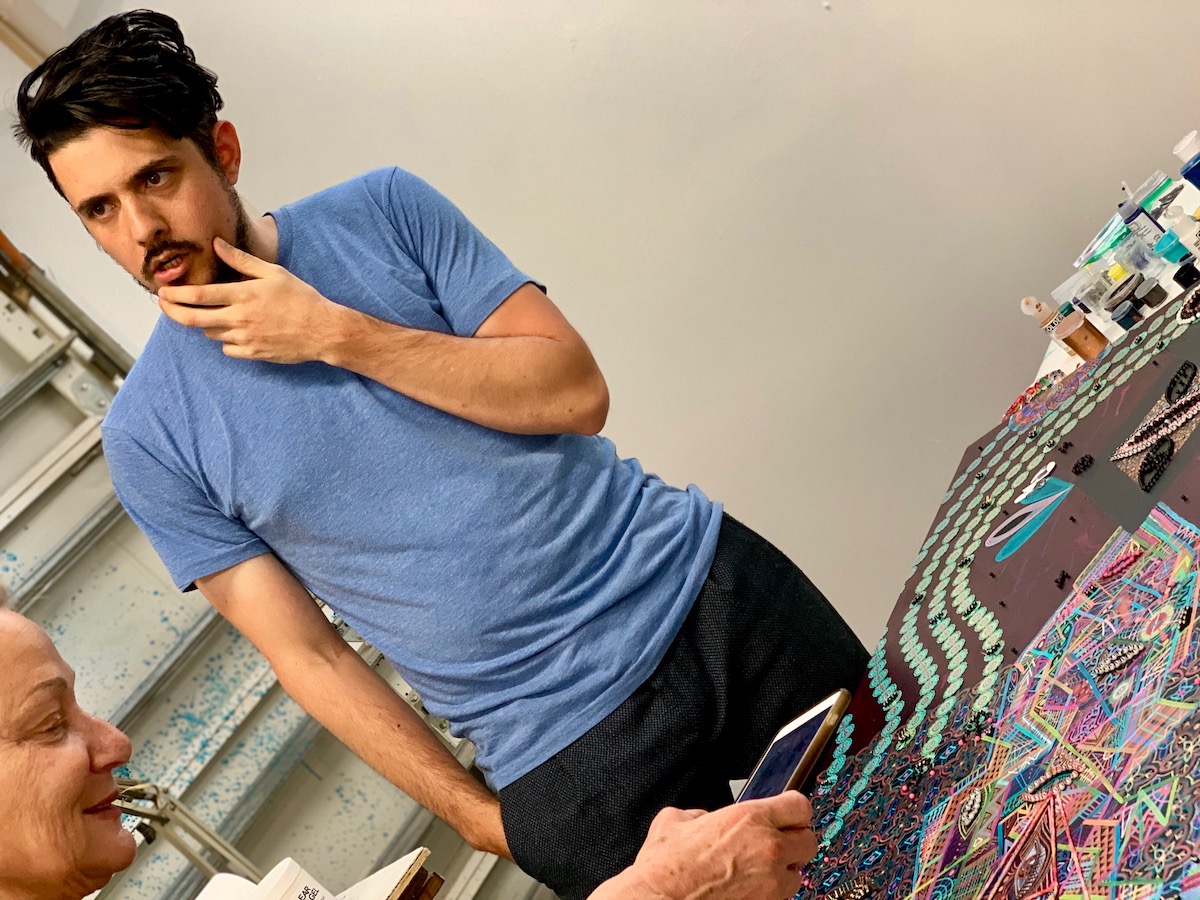 Asad Faulwell is a Californian artist, who boasts exhibitions in important museums and collections, including the Columbus Museum of Art, the Nelson-Atkins Museum of Art in Kansas City and the Rubell Family Collection in Miami.

His recent body of work, Les Femmes D’Alger, is inspired by the film the Battle of Algiers by Gillo Pontercorvo, and focuses in particular on the women who fought for the independence of Algeria from France. In Faulwell’s abstract but figurative works, women’s faces are real faces, taken from photographs taken at different times in their lives, including moments in which some of them attended court trials. The faces, the figures burst from the colored backgrounds of the spectrum, to the limit of the psychedelic, which emphasizes their appearance by removing them from the anonymity and symbolically linking them to memory. They are women who suffer, women who are violated and ridiculed who fight with the Algerian people against the French occupation and at the same time also against the same Algerian male people for whom they fight and from whom they are disowned. Left alone in a country that does not consider them equal to men, women acquire the dignity they deserve in Faulwell’s works, emerging from anonymity. The canvases combine faces with empty, propped and bleeding eyes, with different textures that mix collage and mixed media. Frequent is the use of drawing pins that are inflicted inside the work and meticulously colored until it becomes part of the whole. Faulwell also uses pointillism, coming to compose works with 15 thousand points, the result of a mechanical process that struck him. While the figure, later more than one, stands out in the foreground, the background recalls ancient ornaments halfway between religion and the painting of the royal courts that give the image a devotional meaning to these women who are at the same time victims and guilty . A painstaking work in which Asad Faulwell recreates stories inside history, a part for the whole, for which the canvases become enigmatic combinations that reveal details that are not always immediate to the eye of the observer: stories with a past and with a story, stories of dreams and of hopes that crash against a reality that historical vicissitudes have shown not to be able to equate the importance of women to men. To adorn the images there are details of the face, which stand out in the work like a Greek: Eyes for the most part, those of the wife or even his and those of the wife alternating, watching the flow of events, the female drama performs within the drama of battle. Battle of Algiers and the battle that continues to infinity in the daily life of the XXI century. 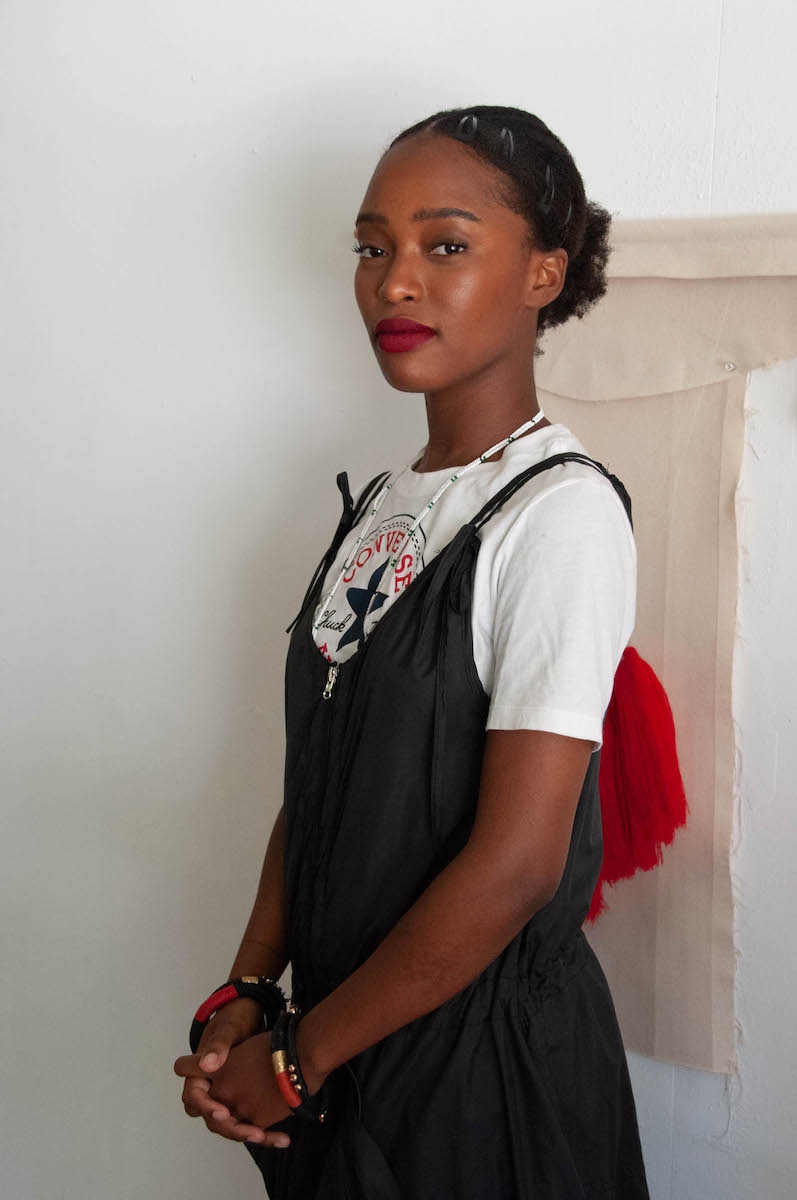 Represented by the Christopher Moller Gallery, in her hometown, Cape Town, Tony Zipho Gum is instead considered a promise of South African art on which to invest and one of the fifteen female artists who are changing the world. In her artistic compositions mostly photographic images, she always appears, in the first person in the eternal dichotomy that binds her being a woman of tribal origins, to being a woman in the XXI century with all that the epoch brings with her, feminism, globalization and preconceptions included. Her images full of grace combine the figure of the African woman with traditional clothing and accessories to the image of the global brand par excellence, the coca cola. In the series of works Black Coca Cola of 2015 Tony Gum skillfully mixes the image of black South African culture with coca cola products: her graceful figure appears dressed by Pin Up (purely American image) by an African woman who wears the traditional band on her back  to which the coca cola bottle has been replaced but meaning that brings us back to the theme of globalization. In the Ode to She series, it appears instead with a bare-chested, adorned with traditional and imbaola beads, the traditional natural clay used to sprinkle the body and that dresses her in the transformation from a young woman to an old lady while the unequivocal symbols of our century (the cell phone in the act of taking a selfie and the coffee machine) diminish the rhythm of the passage.

Among the composed works, there is also an approach to sculpture, which preserves for itself until it will be “ready to show this intimate part to the world“. The series consists of photographs depicting a cast of her half-length image combined with the element that differentiates South African clans: the characteristic hairstyle or tool that traces the uses, meanings and traditions of tribal people.

The work proposed for the Fountainhead Residency is inspired by a photograph of the series composed in 2019 and in which she poses with her black cat, Diesel. And if it is true that stupidity and ignorance are the real scourge of humanity, the superstition concerning the black cat, which physically represents the fear of what we do not know, only because it is misunderstood (and with the risk of making us become victims of ourselves) clashes in her images against esotericisms and beliefs. In her photographs, in fact, her person merges into a whole with the cat she holds in her arms and even takes on the features of ber eyes. During her stay at the Fountainhead Residency she composed a work that recalls her photographic composition adorned with a red loom-like textile material. 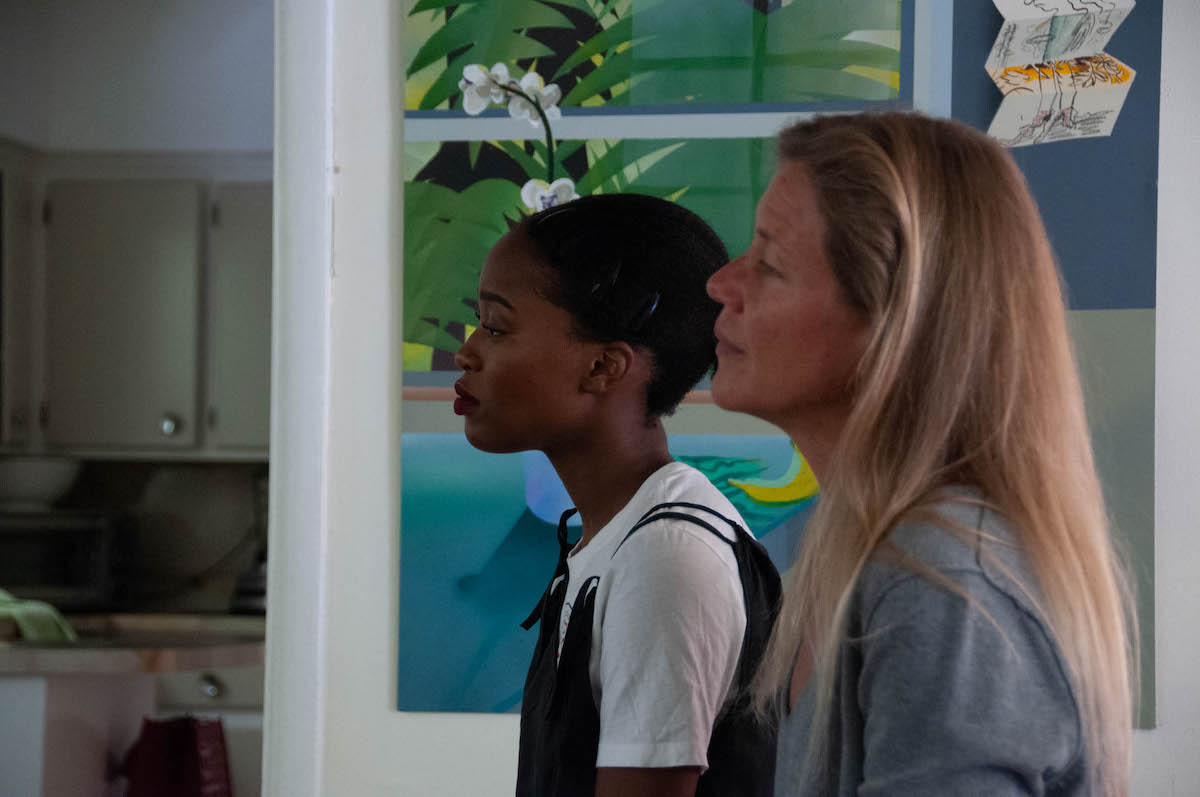 Many points of view, many combined artistic techniques that emerge thanks to the sharing of moments of intimate exchange like those proposed by the Fountainhead Residency and its Co-Founder and Executive Director Kathryn Mikesell.