The desecrating look of the Italian Elena Monzo in the panorama of Miami Art Week, for The CAMP Gallery. 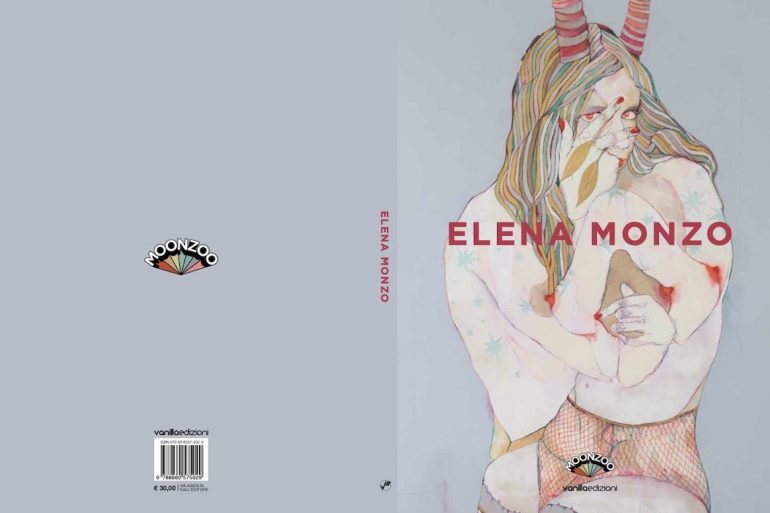 Italian artist Elena Monzo was the highlight of The CAMP Gallery – The Contemporary Art Modern Project, by Melanie Prapopoulos, on display at SCOPE: one of the most prestigious satellite fairs during Miami Art Week. Miami Art Week is America’s most ambitious art week during which people, for the love of art, gather on time every year in early December.  Prapopoulos, who has a flair for Italian artists and had presented, in 2019, the artist Stefano Ogliari Badessi, said about Monzo, “She is a truly amazing artist, who manages to combine with a certain sensitivity, never obvious, the opposites of the soul, letting them coexist in harmony.”

Miami Niche met the artist in her art studio, in Italy, in Orzinuovi (BS) where to welcome us, there was also a special guest: her son Vincent, born at the same time of the Miami Art Week and reason why the artist had to give up attending the art week.

After refining her artistic studies in painting at the Academy of Fine Arts of Brera in Milan, Monzo presented her first solo exhibition in the city of Gonzaga, in Mantua, IT,   in 2009, with the Giovanni Bonelli Gallery, which projected her into the contemporary art scene.

Since then her personal artistic path has become wide and varied.

She has attended several artistic residencies around the world: in China, in Japan, at the prestigious The Swatch Art Peace Hotel in Shanghaì, at the Alia, Fadi Mogabgab Art Contemporain in Beirut, Lebanon (by private invitation and in which she has spent every summer for seven consecutive years) and at (the) El Gallo Estudio de Arte y Ceramica in Cholula, Puebla in Mexico where she experimented with ceramics.

These cultural experiences have allowed her to satisfy her soul, which is constantly in search of new stimuli and to broaden her artistic perspective. “Travels represent an important stimulus because they allow me to connect with international artists with whom I have the opportunity to compare and expand my views,” said the artist who has alternated, over time, exhibitions and art projects around Europe and America.

She is currently on display with her solo show “Korova Milk,” – her latest series also presented with The CAMP Gallery in Miami – at Febo e Dafne Gallery in Turin, IT, which will remain on view through April 30.

Elena Monzo is a provocative figurative artist whose duality is always in the balance and tense in the continuous search for harmony of opposites between being and appearing, Yin and Yang, black and white, male and female. The favorite subjects with which she expresses her creativity concern the feminine universe: “I find that the woman, because of its own nature more complex than the male, is a more interesting being to study and analyze,” said the artist.

Among her favorite mediums are the immediacy of acrylic, collage and mixed media, – which she prefers to oil – and which she considers an “endless” medium. She also states that she deeply loves etching and drawing.

Practicing engraving, in particular, has allowed her to dig into the meaning of the sign that for Monzo represents her true nature and emerges in a decisive and clear way in all her works compared to the use of color. “The duality of art is given by the prevalence of the sign on the color or vice versa and is what distinguishes the art of being from the art of appearing,” says the artist. According to Monzo, in fact, the art of being is given by the sincerity of the drawing, expressed through the stroke; while the art of appearing is that offered by the color, more pandering and marketable, which has many shades but that in practice, without the support of the stroke, is sterile.

The artist’s use of color is very reminiscent of the world of Pop Art and differs in its use depending on the artist’s period of maturity. Monzo prefers the tones of white (the White Trash series and the Creamy series are examples) and black (the Dark Room series) but makes constant use of the white-red-blue combination that the artist sometimes applies with small touches of color to set off “alarm bells” regarding the duplicity of the meaning of colors or to downplay a detail in a pop key, such as a nipple or nail polish. “The viewer is confused about the use of color because initially they are attracted to it but then they are pushed to higher levels of reflection,” says the artist.

The lines of Elena Monzo’s drawing call to mind the marvelous tremulous line of Egon Schiele, an emblematic character linked to the Viennese Secession. The same expressiveness of the faces recalls their essential and poignant forms, but in Monzo’s work they reach, due to the lack of pupils, higher levels of reflection that cross the boundaries of the duality between being and appearing. In most of her works, Monzo depicts beautiful women, rich in color and attractive but without the pupils that represent the mirror of the soul: a denial that in fact makes them similar to empty containers immersed in a sterile and corrosive society where appearing counts more than being and where the void is filled by the impelling and unbridled desire for consumerism.

The title of the latest series “Korova Milk” is inspired by the famous movie “A Clockwork Orange” by Stanley Kubrick (1971) where Milk+ is dispensed, but unlike Kubrick’s characters, Monzo’s absurd and bizarre women take possession in this phase of a dimension that until now had been precluded: the acceptance of the self and of their own imperfections with all that follows, forgiveness towards themselves and the opening towards new horizons. In the case of the artist, the opening up to new horizons was equivalent to a collaboration with the artist Luiss Perlanera, a skilled engraver of cameos in mother-of-pearl and coral, who created micro-cameos in gilded metal for the Korova Milk series. In creating her latest series, Monzo strictly used the 50 x 50 cm format. “The square symbolically represents the room in which each of us lived during the lockdown,” says the artist, who states how important was the development of the web with which to interact during the lockdown. The web materializes in Monzo’s works in small spider webs made by Luiss Perlanera and applied to the works.

However, Kubrick’s influence on Monzo is not limited to Korova Milk and its excesses, but remains almost obsessive and transversal in all her series, even in the representation of the iconic “twins” from the film “The Shining” (1980).  Monzo’s twins, however, take on a different meaning depending on the artist’s creative moment: in the work “Burning Men” from the Lolly Pop series they are portrayed as the ostentation of exteriority for the sole purpose of enticing the viewer; in “Village Chicks” (taken from Dark Moon) they are charged with the social contradictions perceived and experienced during the artist’s stay in residence in Lebanon; in “Smokers” (taken from Korova Milk) they take on the features of two avid smokers dressed up as if they were about to go to a party that in fact will not be able to be there because of the lockdown, but the acceptance of the self, which characterizes this series, will allow them to embellish themselves with small carvings and cameos as jewelry, for pure personal pleasure.

In her works, Monzo deals with psychological and social themes of the female figure that she mixes with mystical and religious symbolism, ranging from Freud’s psychoanalysis to Jung’s one. In this long analysis takes shape the character of Lilith, the first woman and companion of Adam, whose lack of historical documentation has left freedom of imagination to medieval kabbalists who have attributed demonic properties that indicate the dark side inherent in human nature. Like the twins, Lilith evolves with the personal and artistic maturation of the artist and begins the journey of acceptance of the dark side of the self, which will later find fulfillment in Korova Milk. In the work “Red Hot Chilly Cake” (acquired some time ago from a Russian collector and from the series Deus Nos Iunxit) Monzo represents a doubling of Lilith: there is the Lilith that looks straight at the observer, represented with demonic horns and fingers that symbolize the religious triad, and the Lilith that embraces the other part of herself, until it merges into one, accepting the dark side of the counterpart. A process that comes to maturity in the series Creamy, where Lilith takes on the guise of a shaman, which, with sweetness inspires and leads to the understanding of the many facets of our soul.

Among the various projects that Elena Monzo has realized, in addition to the monotypes, serial engravings in aquatint and/or etching, then customized with watercolors and gold leaf, there are giant pillows, always made during the lockdown period and an artistic book written in the Italian-English version, and proposed as if it were a Fashion Magazine. In the book, in addition to scrolling through images of Monzo’s works, it is possible to see her women evolve in the seven creative periods distinguished by name and conceptual evolution of the artist’s artistic path, unquestionably contaminated by her travels. The series are: White Trash, Lolly Pop, Dark Moon, Orient Express, Deus Nos Iunxit, Creamy and the most recent Korova Milk.

Now that in Elena Monzo’s life there are Vincent and his father, Gigi, everyday life has unquestionably changed, but the artist declares that she feels ready to return to travel and to sincerely lay bare the psycho-social dynamics that distinguish her irreverent nature and her unprejudiced gaze.