The Chicago Cloud Gate, the navel of the Anish Kapoor world. 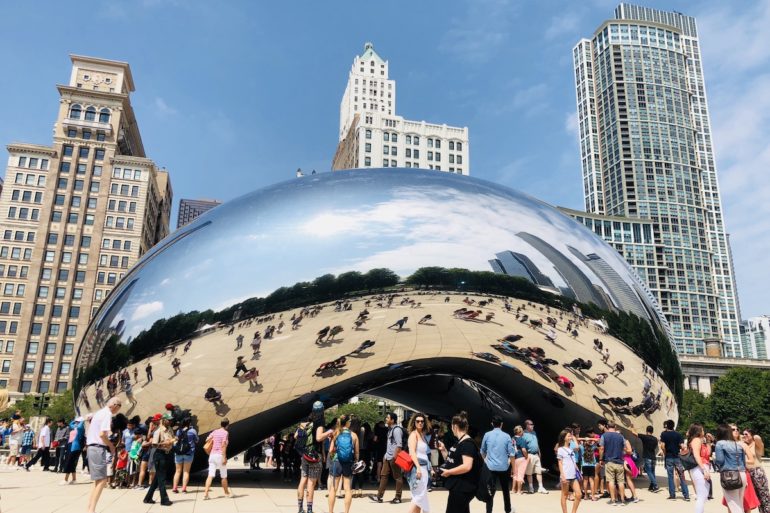 The Cloud Gate is the emblem of Chicago. The work of the English artist of Indian origins Anish Kapoor is placed at the center of the Millenium Plaza in the midst of other remarkable architectural works. The Cloud Gate is familiarly called the bean by the inhabitants of Chicago because of its appearance. Actually Anish Kapoor conceived the architectural work inspired by the fall of a mercury drop, its fractionation and movement. The history of Cloud Gate dates back to the announcement launched in 1999 by Millenium Park officials who, in collaboration with art collectors, curators and architects had decided to install a work of art in the park gardens. Evaluating the project of 30 different artists, only two remained in the race: Jeff Koons who had proposed a sculpture in the shape of a 46 meter high slide with a panoramic roof accessible by elevator and the Anish Kapoor Cloud Gate, already known internationally for creating spectacular works in urban environments of extreme dimensions and with a strong visual impact. The Cloud Gate won the tender. It was Kapoor’s first public open-air opera in the United States. 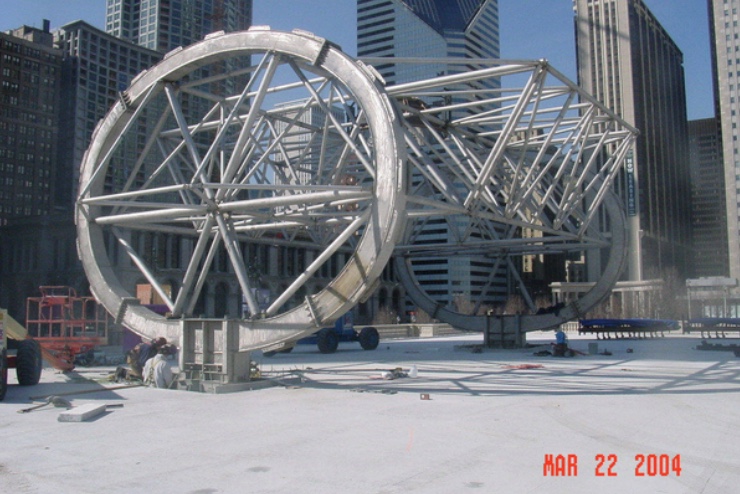 Consisting of 168 polished and coated sheet steel plates welded to each other by the Oakland company, Performance Structures Inc., through a five-step process: initial sculpting and first contours, second sculpting, finishing and polishing; operations necessary to produce the mirror effect typical of the sculpture that makes the welds practically invisible. The idea was initially to build the Cloud Gate in Oakland in its entirety and then transport it to Chicago by sea but the operation was considered too risky, so it was decided to transport each single steel panel by land and then assemble the structure on site. The first piece of the Cloud Gate was built in 2004 and consisted of two rings of stainless steel with crossed tubes that allowed balancing during work. The structural part was then removed before finishing the work. 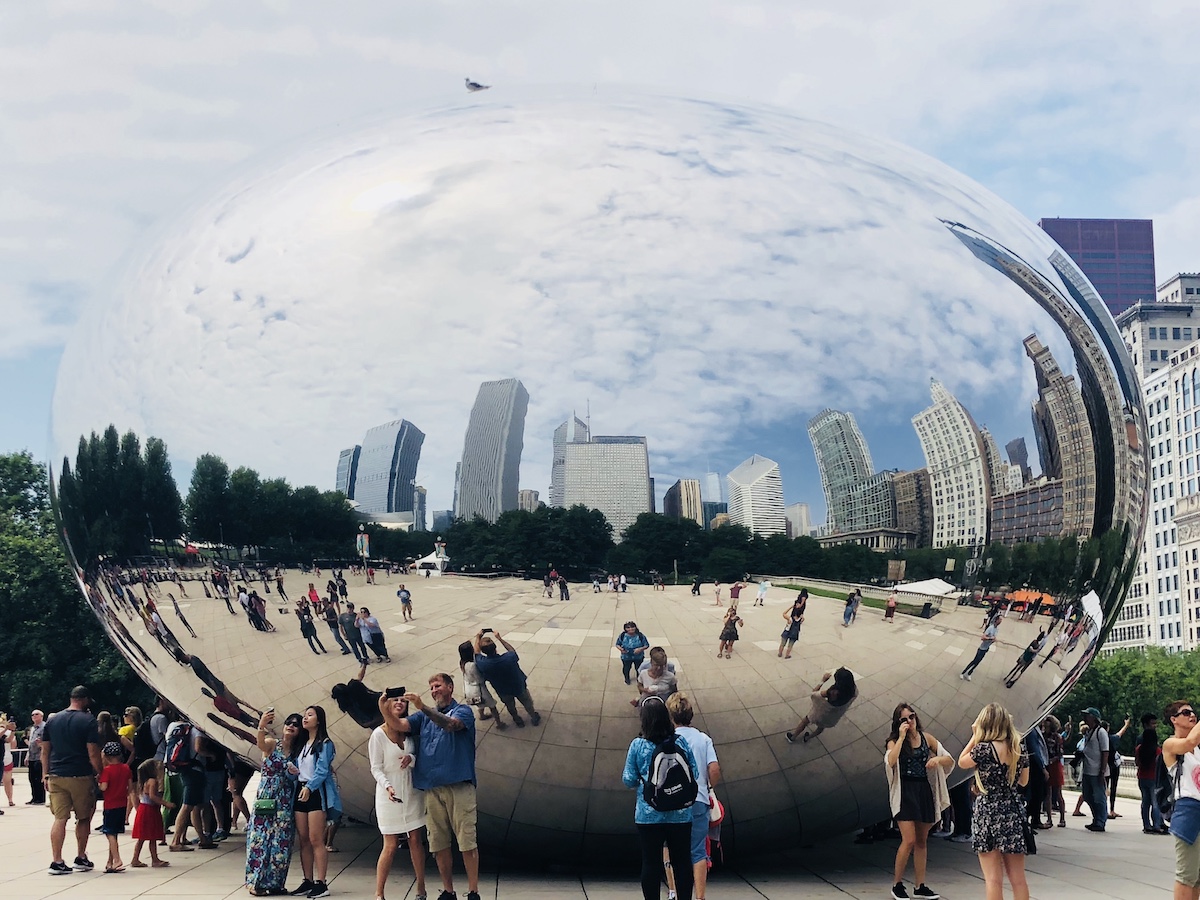 With its elliptical shape that distorts everything that is reflected, from the surrounding skyscrapers to the thousands of people who every day enjoy photographing their distorted image on the glossy, smooth and reflective surface, the structure is 10 meters wide, 20 meters long and 13 meters high. The total weight is not of 54 tons as initially estimated, but 100. This was the reason that led the officials to rethink a suitable place where it could be assembled. So was chosen the “AT & T Plaza”  reinforced to support the work, Kapoor used a type of high density polyurethane foam for modeling both the plastic and the final work. The polyurethane is a very versatile, long lasting, lightweight plastic material, resistant to high temperatures (this is fundamental because of the important climatic variations of the city), and it is an eco-sustainable material that does not contains or releases harmful substances.

It is present in different densities which determine its mechanical properties by responding to the weight x volume unit formula. The Cloud Gate is further supported by side elements below the square that are anchored to the interior structure of the sculpture by means of tie rods. The concave shape of the Cloud Gate allows visitors to walk below and admire and have fun with the mirror surface that creates multiple reflections and allows you to interact with the work itself. 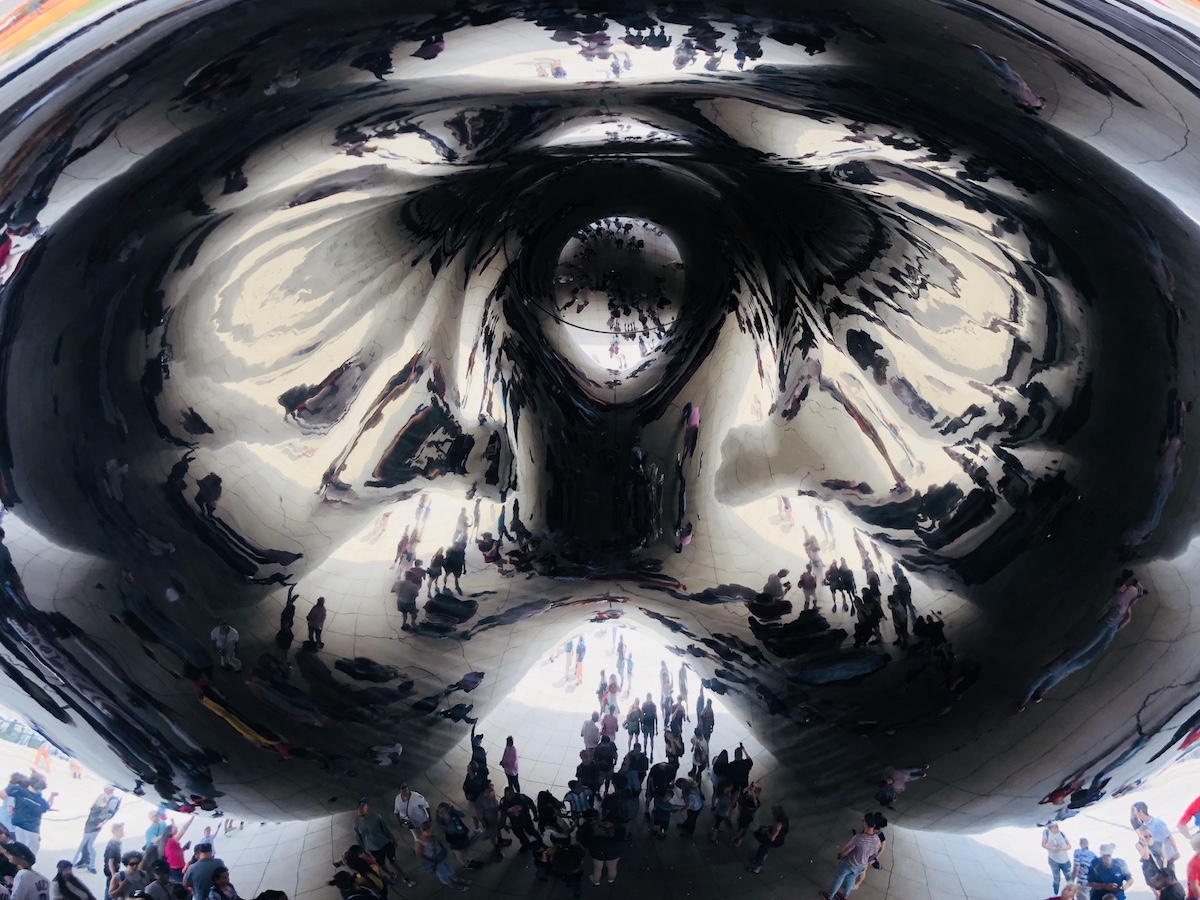 The interior of the Cloud Gate reaches a maximum height of 8.2 m and is called the omphalos, the navel. The sculpture was completed on August 28, 2005 and available to the public on May 15, 2006. The initially estimated cost of $ 6 million, rose to 11.5 in 2004, to reach the final figure of 23 million in 2006. This capital was not raised with taxpayers’ money but with donations from individuals and companies. The surface of the Cloud Gate in addition to the mirror effect from which you can admire the surrounding buildings in a distorted manner, helps to de-materialize the sculpture making it look light, almost weightless.

The lower part of the Cloud Gate, which starts from the ground and reaches 1.8 m in height, is cleaned by hand twice a day, while the total cleaning is done twice a year with 150 liters of detergent.

Chicago Mayor Richard M. Daley, during the inaugural ceremony in which Kapoor also participated, declared “Cloud Gate Day” on May 15, 2006. At the opening ceremony the jazz trumpeter Orbert Davis and the Chicago Jazz Philharmonic played the song ” Fanfare for Cloud Gate “composed for the event by Davis himself.

Kapoor’s creations have religious roots: they are inspired by Buddhism, Hinduism and Taoism and aim to evoke immateriality and spirituality. In fact, the artist investigates and plays with opposing concepts and concepts: solidity-vacuity, reality-reflection, inside-beyond, heaven-earth, creating the conflict between inside and outside, superficial and underground, conscious and unconscious. Three quarters of the outer surface of the sculpture reflects the sky and sometimes it is difficult to determine where one ends and the other begins.

In addition to being considered an element of recognition for the city of Chicago, the work has received several awards including: the American Welding Society (the US organization that deals with the improvement of welding techniques), MTH Industries and the PSI with the “Extraordinary Welding Award”, while “Time” nominated Millennium Park as one of the best achievements of 2004, citing Cloud Gate as one of the major attractions nationwide. 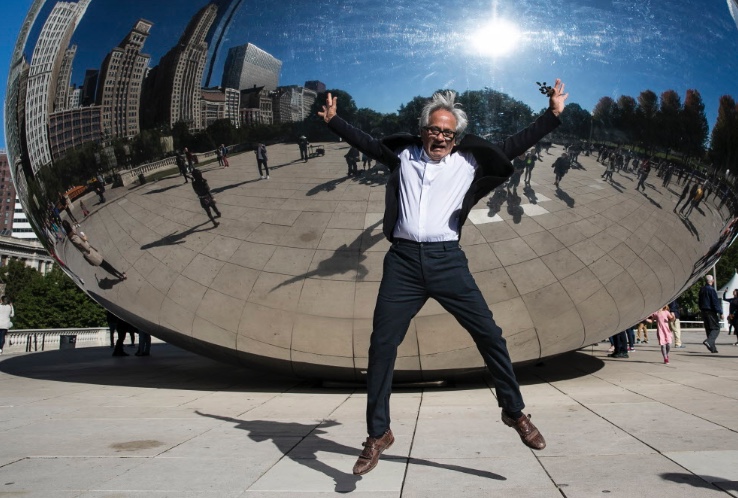