The Beginner/Refresher’s day…welcome back to the pre-event of Realism Live, 2022. 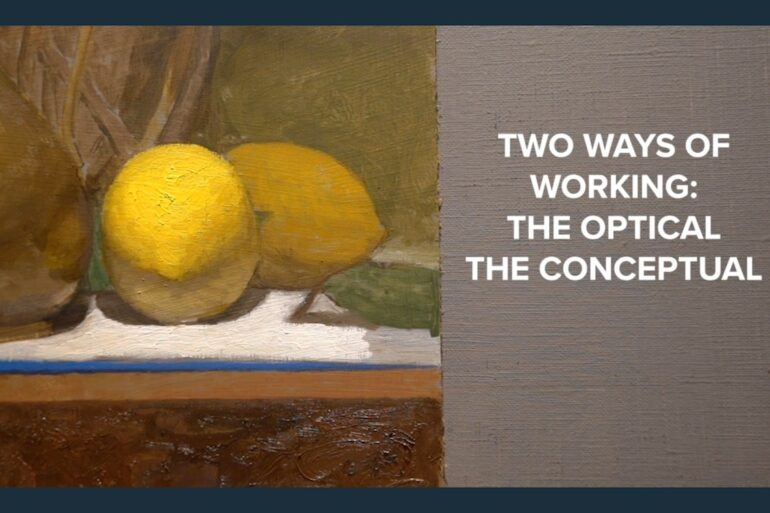 The Beginner’s Day, appropriately renamed by Eric Rhoads, -The Beginner’/Refreshing’s day, is the optional event that allows for in-depth terminology and basics needed to perfectly assimilate the demonstration sessions conducted during the official convention.

Official presenters of the third edition of Realism Live were, as usual: Eric Rhoads, -The Man- entrepreneur, showmen and founder of all Streamline Publishing events and Peter Trippi, editor in chief of Fine Art Connoisseur Magazine, museum director and leading scholar of 19th and early 20th century European academic art.

Starting with the desire to create a “Disneyland for artists,” Rhoads is keen to point out that the purpose of Streamline Publishing events is to offer all participants, the chance to redeem themselves as artists. And to achieve this goal at each event he consults a roster of internationally renowned artists, recognized not only for their artistic merits but also for their ability to teach. Acquiring technical skills, however, is not the only purpose of the convention since making art not only brings mental benefits but also helps the brain stay young, consequently affecting physical well-being as well. The important thing, according to Rhoads is to depart what has become his mantra over time:” Today I am open to learning more and pushing myself beyond my comfort zone, so I can do that.”

Emphasizing how portraiture represents one of the most sublime forms of Realism, Peter Trippi introduced the first, great, artist of the day, Oliver Sin.

Winner of numerous awards and writer of the book” Drawing the Head for Artists,” Sin created a female portrait using vine charcoal-a medium the artist particularly appreciates for its versatility.

In reiterating the technical definition of “values,” which in technical terms are of greater importance than the use of color, Sin states that tonal values serve to create a focal point, based essentially on the juxtaposition of light and shadow. Elements such as these make it possible to make the image three-dimensional on paper.

In order to understand the importance of values, the artist recommends making a scale of tonal values. While for most experts the tonal scale consists, by convention, of nine values, Sin simplified the process by limiting himself to a five-value scale in which he placed: at the ends the lightest value (1) and the darkest value(5), which tends to darken further as a result of repeated cross-etching layers, the midtone in the middle (3) and the two resulting semitones (2 and 4). “Continuously referring to the tonal scale, squinting and not focusing on details in the early stages of portraiture are indispensable processes for properly defining the tonal values of a solid realistic composition,” Sin argues.

Appreciated star of the last Pastel Live, Carol Peblees performed a demonstration on how to make, in a realistic manner, one of the most difficult components of human anatomy: the hands. In addition to the theoretical lecture, based on the explanation of preparatory drawings and sketches made earlier, Peblees performed a demo in which she practiced the five essential points that she believes are as fundamental in the construction of the hand as the foot. The points are: gestures and their linear rhythm that help understand the relationship between the parts; defining masses for large shapes; defining knuckle lines and falages lines; defining what she calls “bad-boys,” the divergent fingers, in relation to the rest of the hand; and darker colored points that help define the perimeter, surfaces, negative spaces and the pressure of the hand on surfaces. “I suggest that you all draw your hands at different angles using this technique,” the artist advised at the end of the class.

“Color mixing is a journey,” said artist Sarah Sedwick, who for her demonstration session explained color theory by making a still life work with a palette limited to the three primary colors plus white. Sedwick made the demo from the basics for which she composed an amazing palette. It is amazing to see how many color combinations can be achieved from using just the three primary colors plus white.

The process of pre-mixing colors is also the secret to the success of her works, confesses the artist, who declares, “time spent mixing is time spent painting!”. The mixing process is indeed time-consuming in its preparation, but for Sedwick visualizing all the colors needed for the painting is crucial to proceeding properly adjusting her shot as she goes along if she needs to correct a tonal or chromatic value.

After laying out a base for the painting, the artist began, as she is wont to do, by drafting the most saturated colors, which help her in defining the composition where, any mishaps along the way are welcome because, as the artist says: “Never be afraid to adjust the painting”

According to Todd M.Casey there are two different approaches to painting: the optical one and the conceptual one. In the day’s rich demo session the artist demonstrated the perfect synthesis of these two approaches.

After showing the multiple steps from the realization of the composition referring also to the seven Sanic principles mentioned by Maitland E.Graves in his book, The Art of Color and Design”(balance, movement, partes, emphasis, contrast, rhythm and unity), Casey wanted to dwell on the final realization of the lemons in the foreground. “In choosing colors, I try to get closer to the relationships I see,” said the artist, who laid out small patches of color that he arranged as if they were tiles, avoiding mixing them together as much as possible. Colors that vary according to perspective and light and that highlight, as if it were papable to the touch, the zest of the lemons. In the execution of the citrus fruits, he dwelt on the physical laws governing the refraction of light on the surface of objects and shadows as if they were spheres. Using technical language Casey wanted to introduce the participants to all those concepts experienced and wonderfully explained in the demo and which are contained in his latest book, “The Oil Painter’s Color Handbook (A Contemporary Guide to Color Mixing, Pigments, Palettes, and Harmony),” also available on the PaintTube site at the following link: https://painttube.tv/products/todd-m-casey-oil-painters-color-book-hardcover along with a wide range of videos, books, and artists’ tools.

Specializing in simplifying sometimes very complex concepts such as hair making, artist Sandra Angelo created an unusual and very interesting demonstration on a topic most often not covered at conventions: realistic hair making. “The reason I chose to explain this topic is that if you know the tricks everything becomes easier to achieve,” said the artist. Using only an electric eraser and a range of pencils of varying hardness she began by laying down light layers ( F, B, HB) with which she established the shapes, and then gradually added medium pencils (2B and 3Bfor medium-light tones; 4B and 5B for medium-dark tones) and even darker pencils (6B, 7B, 8B).

Using a full range of pencils makes a huge difference because you get a contrast that adds depth to the drawing. Sandra Angelo says copying and emulating old masters is of paramount importance. Only by getting lots of practice is it possible to push yourself further until you create a composition with a completely personal narrative. “If you practice your brain gets information and you know what to do when you find yourself in difficult situations because practice helps build intuition,” said the artist.

The latest beginner/refresher’s day artist, Debra Huse created an oil painting of a landscape, a little gem from her imagination. Painting that was possible thanks to the knowledge fine-tuned during the long years devoted to plein-air painting. What is striking about Huge, in addition to the mastery with which she varies the light and elements of the composition, is the decisive manner in which with just a few brushstrokes she manages to create a marvelous scene in terms of light and perspective. The result is a masterful realistic work that she creates from a large square in which she inserts the simplified compositional elements into large shapes and later elaborates to completion. “A beautifully evocative landscape that evolves with each brushstroke,” one participant said about her work.

Among the various sponsors of Stremaline Publishing events there is never any shortage of Pierre Guidetti, the face of Savoir Faire and ambassador for historic brands such as Sennelier, Cretacolor and Fabriano, who delivered, as is his style, a session full of informative as well as practical insights. Blick Art Materials, on the other hand, for its beginner’s day relied on the expert hands of artist Julie Swanson Davis for a demonstration with Blick crayons.

The Beginner/Refresher’s day has come to an end and Miami Niche looks forward to seeing you tomorrow for the official start of Realism Live.

(on the title, a frame from Todd M. Casey demonstration)