The art of Marielle Plaisir between status, sociology, mythology and Les Barbares 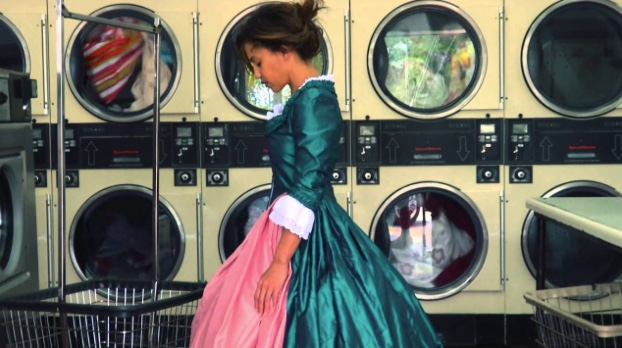 Colonialism, status, sociology and mythology: the ideas, the inspirations of Marielle Plaisir. French-Caribbean artist who was born and lived in Normandy until the age of 16, which origins from Guadalupe (her father) and French (mother). Back on the island of Guadeloupe, in the French department of overseas she had begun to known and realize the experience of colonialism lived by her predecessors. Back in France she attended the National School of Fine Arts in Bordeaux and ultimately she settled in the United States. 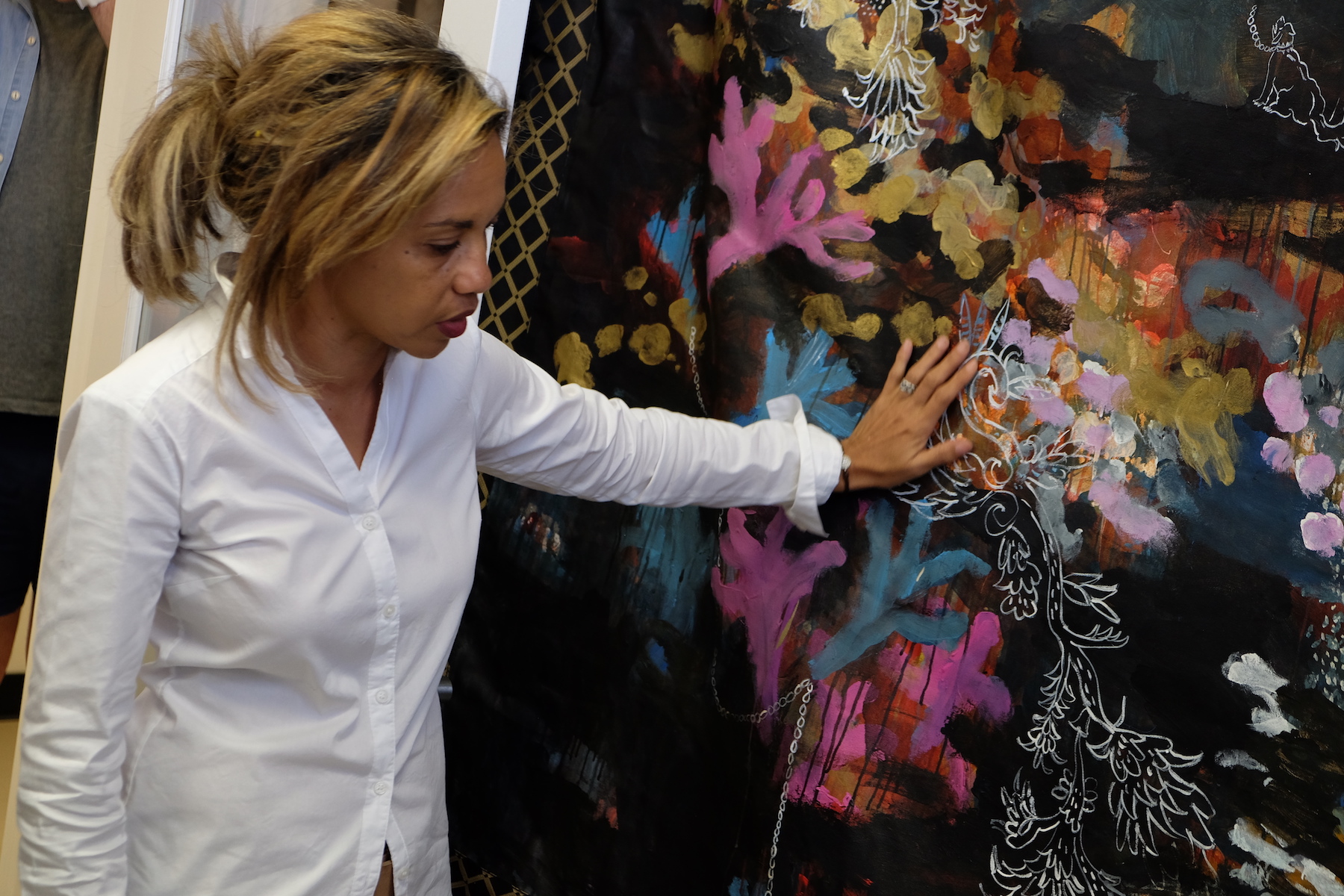 Her concept of art starts from the notion of identity seen from the perspective of someone who looked at history being written and shaped through the eyes of colonialism. Marielle stands in favor of those believing  that power is a purely political factor, meaning it is the repetition of a cultural and non-natural factor inherent in the individual. This concept was previously tackled by Pierre Bourdieu, one of the most distinguished social scientist of the 20th century, and nonetheless her inspirer. According to Bourdieu: the artistic object is not simply given by the work of art, but is also given above all by the social context, full of symbolic violence which in its habitat explains the way in which an individual internalizes the dominant culture and unintentionally reproduces it on the patterns of domination. Marielle investigates this perspective and engages in the de-construction and subsequent reconstruction through her works, of a world in which no one dominates or reigns, a world in which each one moves in total freedom: from the reality of life to the capacity of imagination, overcoming barriers such as the concept of home and immigration, of race and color, of life and death.

Her art, between the real and the oneiric, combines drawing, painting, performances and installations and it is divided into two major strands that share this emphasis on the human condition.

The first section, the active part, consists of ACTA NO VERBA performances, as an extension of an art that is no longer enough to Marielle and needs to take shape through herself: wearing vintage clothes Marielle’s body disappears to leave space to the social status that the dress she wears represents and of which she wants to be denounced. Marielle performs her performances in specific places, from the daily life of laundries to tokens, for example, first in Paris and then in Miami Beach. Locked in a rigorous silence, she denounces the dynamics of domination by covering her eyes (I can not see) her ears (I can not hear) and her mouth (I do not speak). 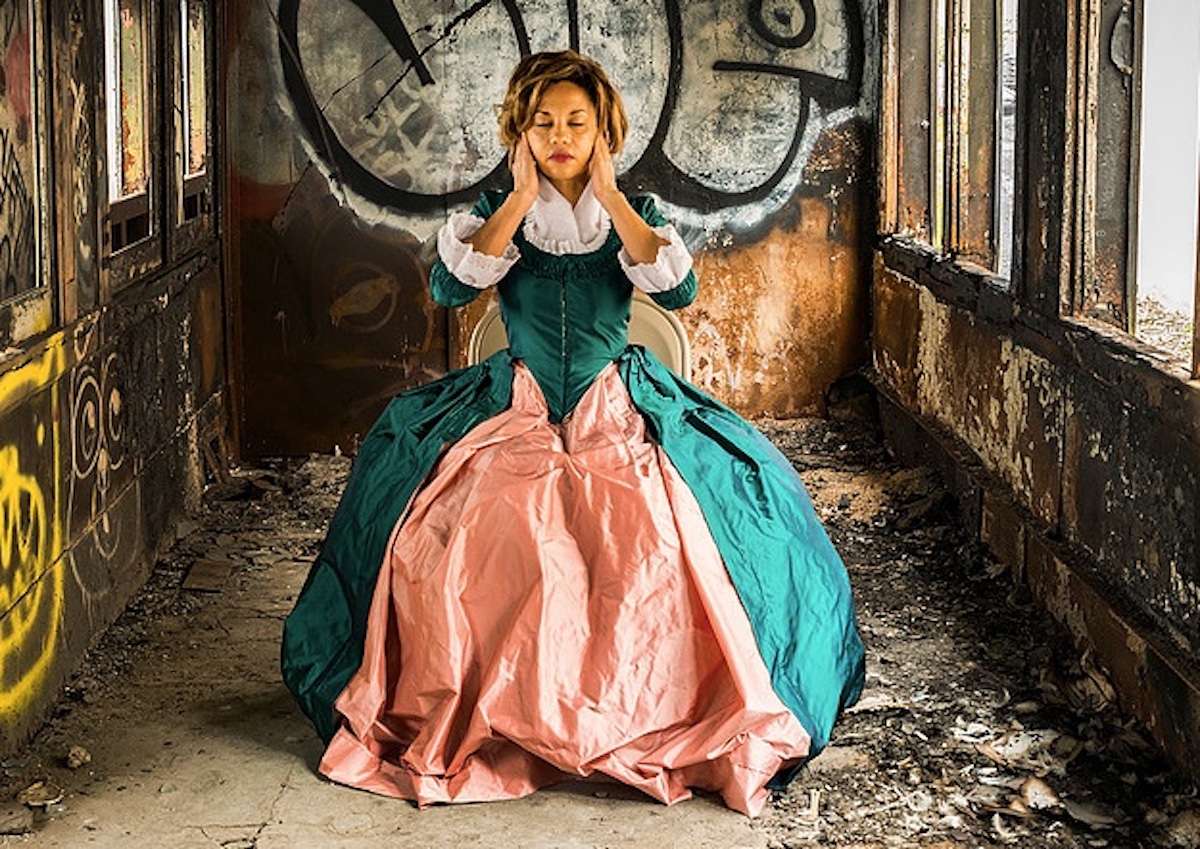 A similar representation took place at the MOCA in Miami, in a different context, undoubtedly more aseptic than the realism of the laundry or the wagon, but equally exciting and highly dramatic because the performance was accompanied by live baritone music, Angel Refusé on the notes of the music of “Après un Rêve” by Gabriel Fauré. 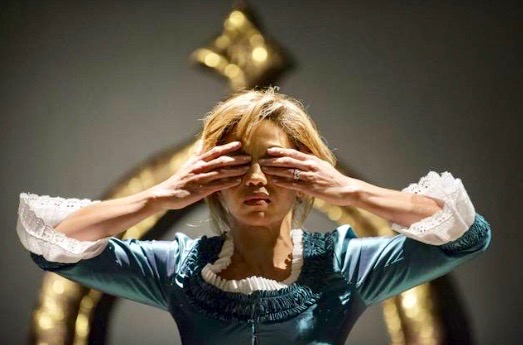 In addition to the performances, Marielle has made several installations, among these “Lavomatic”, in Paris, a gigantic balloon covered in fabric, a fundamental and recurring material used in her works. Marielle dismisses the fabric as a stereotype of the social status of people and shapes it in favor of art in the multiplicity of its expressions. 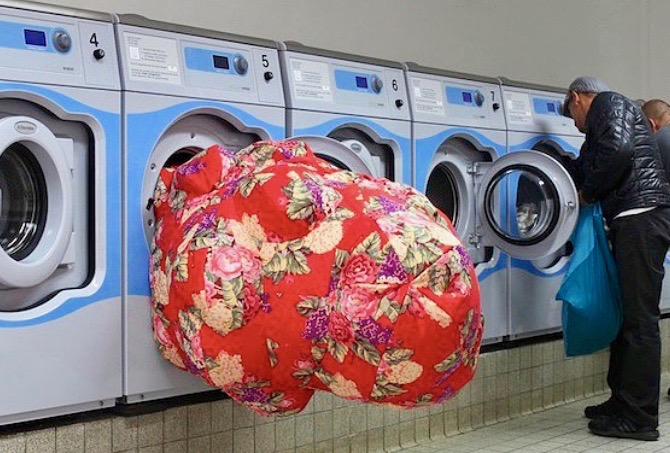 Another installation with high emotional impact was “Dress”: 20 dressed in translucent paper illuminated with LEDs lights and suspended from the ceiling. Among these 20 pieces of clothes ten were elaborated with perforations (lace) and bows, symbol of the rich bourgeoisie, while the other ten were simple without frills and decorations, symbol of slavery. 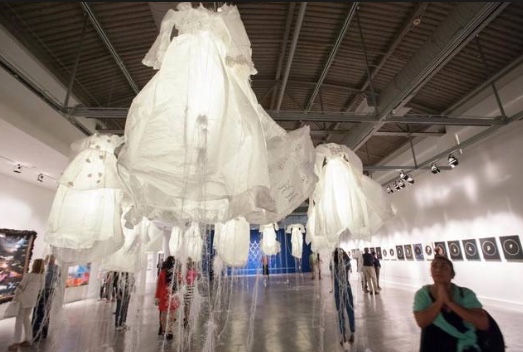 The second strand, the imaginary, oneiric one, consists of the actual work of art made of drawings and works of medium and large dimensions, mostly lithographs, mixing watercolor and acrylic technique, and the inevitable fabric that frames and recalls from antiquity the tapestries of Versailles. In these tapestries are narrated the adventures of King Louis XIV, the sun king, incarnation par excellence of the figure of the absolute monarch; and to the contemporaneity in the quilts of Faith Ringgold, contemporary New York artist who has quilted her stories to be heard. 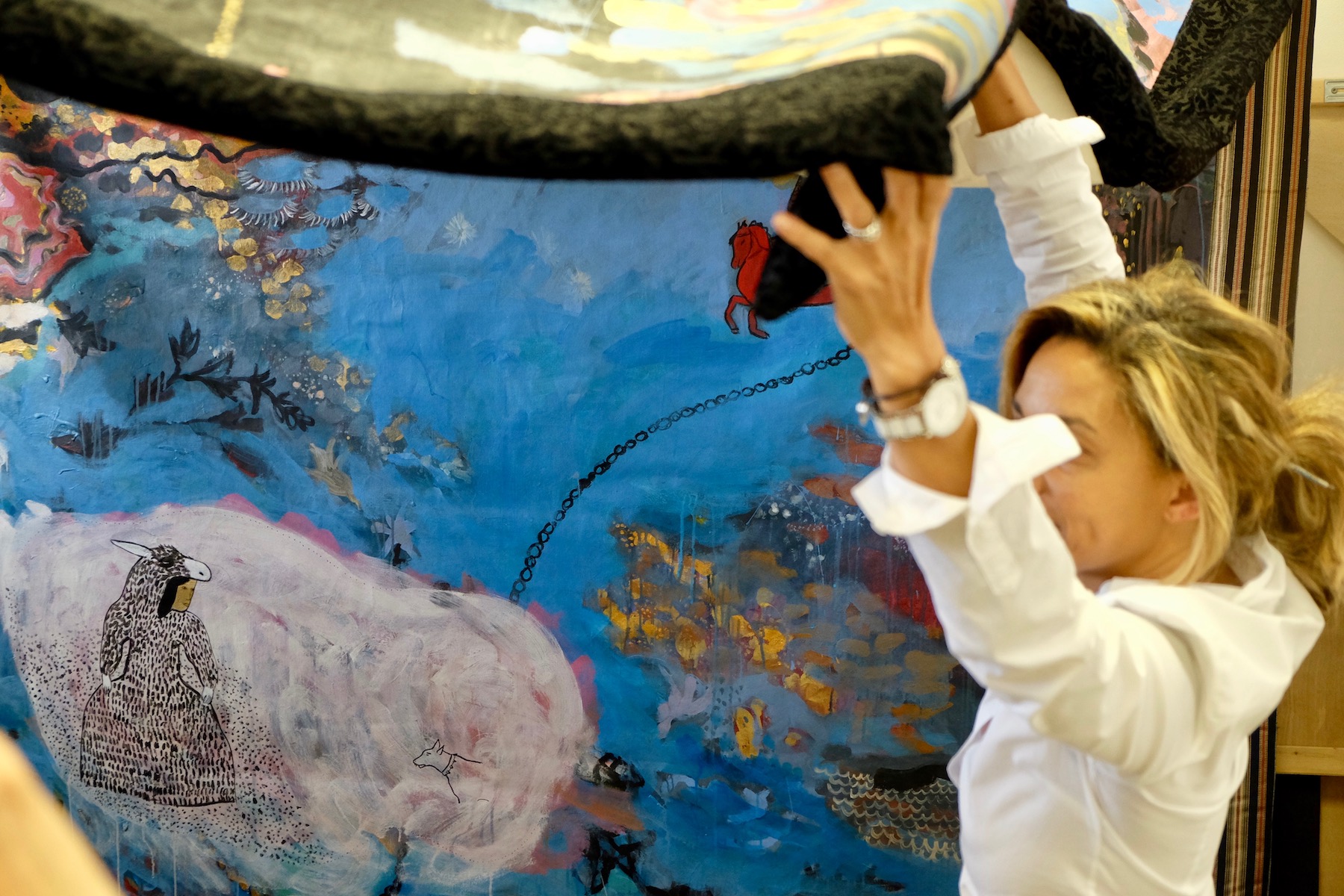 The art of Marielle Plaisir is a positive, serene art, with no drama, which is inspired by mythology and traditional stories such as Donkey Skin, Puss in Boots, Little Red Riding Hood, her favorite, but also stories related to the Italian 1400s and the time of the French nobility. 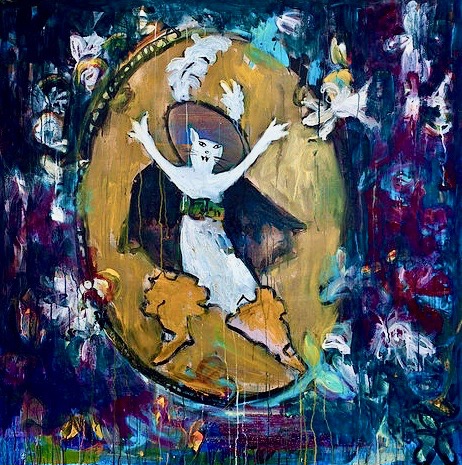 Among her dreamlike and representative works “Blue Blood, Black Blood”, a series of 18 portraits, reproductions of Renaissance portraits, hung in the antique salon style: the rounds framed with fabric brocades, in which stand out the bourgeois figures and characters like Olaudah Equiano, Nigerian writer and merchant who supported the British movement that ended the slave trade. 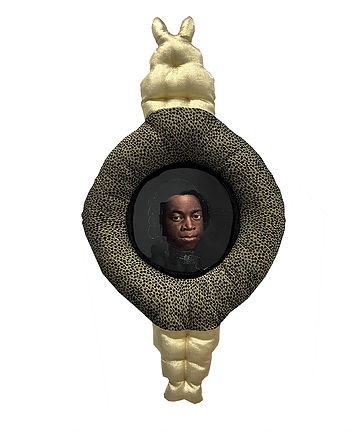 Marielle defines herself as “a dreamer artist with the urgent need to create poetic works that make the world dream”, for this reason her works are always serene and happy and for the same reason she was inspired by a collective of 18 artists in the exhibition “Visionary Aponte: Art and Black Freedom: The book of Life”. A black man, a Cuban, a self-taught artist and leader of the first national conspiracy against the colonial regime of Cuba, Aponte will follow what will be the Cuban independence movement for which he will be hanged in 1812 without regular trial, arriving posthumously to the hearts of many people . Aponte produced a book “Book of Painting”, originally on lamina and partially lost, in which he told the vicissitudes of the time, inspired by which, Marielle, produced the lamina n.23.

But her versatility, after 15 years of performances between performances, installations, and works of art, led her to the funding of  the Les Barbares brand, literally translated as “The Barbarians”, but she interprets it as “The Amazons”, hence the brand logo. Using high quality fabrics: 100% silk twill, Italian and American leather goods, later worked by French artisans, produces handbags, clutch bags, wallets, key rings, scarves but also wallpaper, murals and canvases representing their works of art. art, bringing to a higher level, more tangible, its artistic expression that evolves in the marriage between art and fashion. 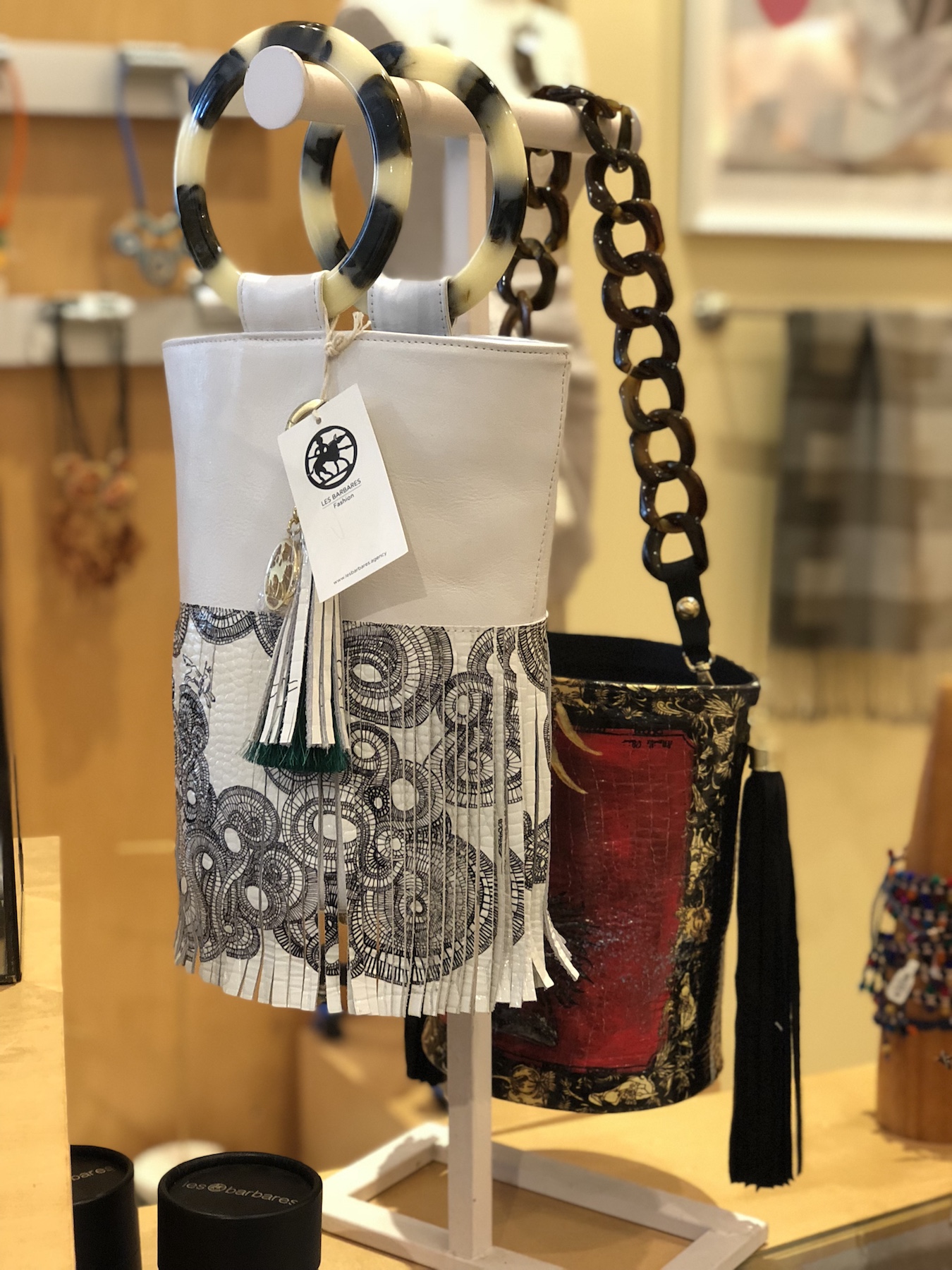 The collection is also available on the website www.lesbarbares.agency in the NSU Art Museum shop in Fort Lauderdale.


A tour around the unique Expressionistic Modern st

Pit stop in Phoenix trough the lens of graffiti ar

Mist Across the Pond by Thomas W. Schaller . Wate

There were many novelties proposed by Streamline P