The art of Dino Valls: the subconscious extrapolations between medicine and the art of the past. 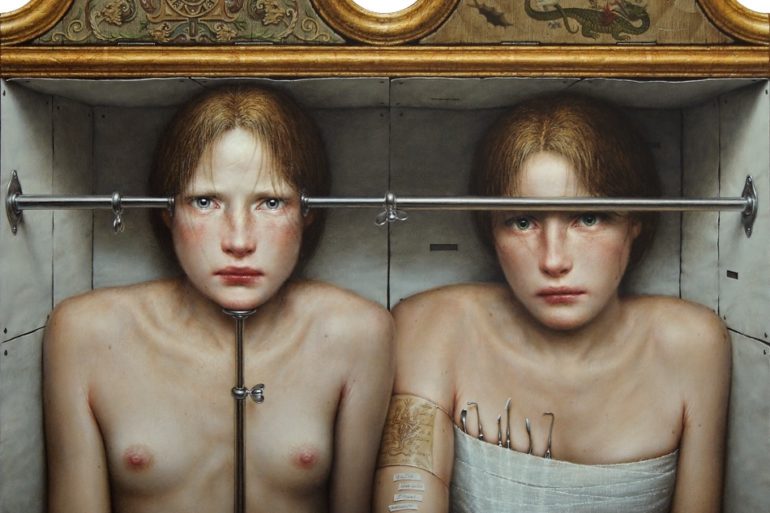 The Byzantine icons recall the works of art of the Spanish artist Dino Valls. Born in Zaragoza in 1956, Dino Valls graduated in medicine and surgery and has been living and working as an artist in Madrid since 1988. IBEX Master and singular artist, Dino Valls has been able to combine the anatomical knowledge of medicine with the art of the past merging them in a splendid form of contemporary figurative realism.

The images in his study books have in fact left an indelible mark on his mind: the study of medicine, in its physical component and even more so in the psychological one, makes this artist out of the box for the skill with which he manages to make the depth of his thought concerning the exploration of the most intimate mechanisms of the human mind that ventures into the depths of the brain from which he manages to create surprising masterpieces that would require days and days of study and explanation.

Strong of his anatomical knowledge and skillful from the technical-manual point of view Dino Valls continuously refers to the history of art through the use of gold leaf, for the choice of the artistic support, almost exclusively linked to the wooden panel and in the choice to represent frequently diptychs, triptychs and polyptychs, particularly evocative of the past. His subjects are almost exclusively female.

The subject represented in prevalence seems to be always the same: a young woman with blue eyes and lips that seem ruined, almost wounded, who turns directly to the spectator in an enigmatic way, turning his subconscious upside down. The woman’s body is sometimes partially covered, tied up, held by thin ropes that wrap around her tightly. Her gaze is gloomy, sometimes thoughtful as the body twists and falls apart in different scenes or sections (the artist states in this regard: “My paintings are reflections in which anxiety has calmed down, together with the painful processes of a divided personality, in which the darkest beast inside the human being sleeps”) and he holds in his hands, on the body or in proximity, symbolic elements described with surgical meticulousness.

The titles of the works are always in Latin, a reference to the medical nomenclature. If in the early 90s in his works the artist used to “dissect” his figures often using egg tempera, and adapting it in a very personal way to the techniques of the masters of the past (Italians and Flemish from the 15th to the 17th century in particular) to create new works in combinations of tempera and oil, his most recent works are in oil and the figures often appear dissected in “drawers” or compartmentalized boxes and are rich in elements full of symbolism that reflect the allegories of the subconscious and their interaction with the irrational: “I use my painting to provide darkness, discomfort, sadness.” says Valls.

“What I do as an artist is to explore the darkest and most unknown part of the human being. My painting is a way to stain the white,” says the artist. In addition to the artwork itself Valls has produced limited series of his books that are masterpieces of craftsmanship and attention to detail: they are both precious and curious at the same time. Valls has exhibited in important exhibitions both in Europe and America, but while the public in Europe has accepted, appreciated and admired his work, in America criticism has not been slow to arrive. Criticism to which the artist, not without a sense of humor, responded by saying that his art is like a Rorschach test in which people see only what they carry within themselves.