The 17th edition of Design Miami/ explores the theme Human-Kind, the designer’s vision for a more equitable and interconnected future. 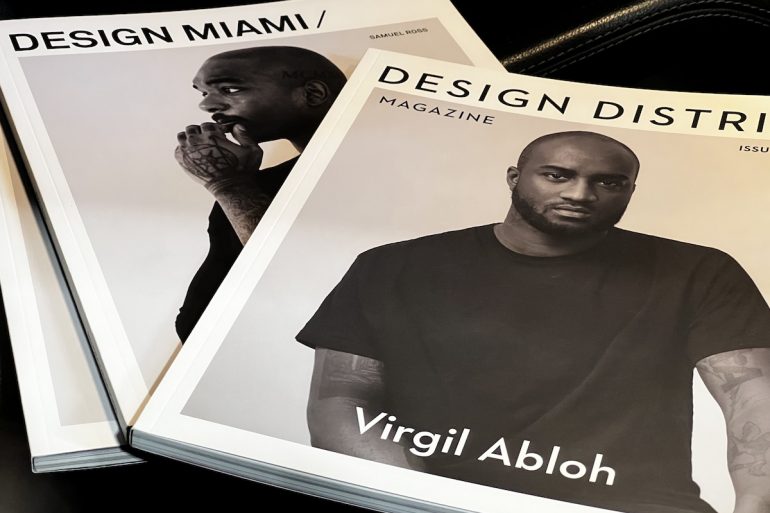 Design Miami/ returns to the marquee set up in front of the Miami Beach Convention Center, after a return to its origins that brought it back, last year during the COVID-19 pandemic, to The Moore Building, in the Design District.

This year the iconic marquee returns more colorful than ever with its large spaces due, in part, to the distribution of exhibitors. Among the big news this year are: the new curatorial director, Wava Carpenter, who has replaced Aric Chen, appointed General and Artistic Director of Het Nieuwe Instituut in Rotterdam, Netherlands; the presentation of the Official Design Miami/ Mobile App; the introduction of NFT and cryptocurrency that will allow payment through Coinbase and the presentation of the Collectors Lounge Designers Commission created by BADG -The Black Artists +Designers Guild.

Wava Carpenter, a specialist in modern and contemporary design, is not a new face among Design Miami insiders. She has been the director of programming, design and commissions as well as a curatorial consultant for the fair for several years. This year, in addition to overseeing the live events, she also supervised the new digital platform established by Design Miami/:  DM/BX.

DM/BX is the online destination for design -launched for the first time in September this year- that not only responds to the emerging gap in the current market, but also offers the public a curated look at the latest in contemporary design culture. It’s a sort of online showcase where the proposed works come from a mix of independent studios, top galleries and experts -craft manufacturers, underground brands and many others- that will be available continuously at the click of a button on the website: www.designmiami.com

BADG, on the other hand, is a platform founded in 2018 for creative professionals seeking community, collaboration, and creative support. This year’s Collectors Lounge showcased the work of designers Leyden Lewis -Leyden Lewis Design Studio- and Danielle Fennoy -Revamp Interior Design- who created camouflage walls -Blackouflage- for the occasion in a spectrum of different hues reflecting the myriad of fluid identities that are encapsulated in the black community. Enclosed booths also offered intimate spaces to sit and converse and to do self-reflection through the mirrors present.

Greatly absent from the press preview was the founder, Craig Robins, who was replaced in the official celebration of the event by both Carpenter and Jennifer Roberts, CEO of Design Miami/, who entertained the press in the new space: the Design Talks Theater, set up with USM Modular Furniture x Luminaire: essential modular modules that also included the Phaidon x Books & Books bookcase, the exclusive bookcase of Design Miami/, which offered a Limited Edition by Mickalene Thomas.

This year’s Talks embraced the fair’s hybrid format, offering both in-person and digital lectures, available to visitors from around the world, that explored the current and future journey of mankind in the world. An uninterrupted succession of over fifty speakers, among them: designers, curators, critics, collectors and gallerists, made the various Talks must-see appointments of Design Miami/.

The theme of the 17th Miami Design/ is based on the Human Kind and featured 22 Galleries, International and 19 Curio exhibitions. In addition to all this there were satellite events scattered throughout the city and additional programming that included: presentations by FENDI, Lexus and SCAD _Savannah College of Arts and Design- as well as new partnerships introduced including DIOR with its Medallion Chair, at the new Superblue Miami.Accompagnati nel tour da Jennifer Roberts, particolarmente interessanti sono state:

The FENDI exhibition which presented, in collaboration with MABEO -an associated studio from Botswana- the Kompa project: a collection of ten pieces of furniture composed with distinct and interrelated methods. For their creation, MABEO turned to artisans living in a desert environment where materials of plant origin are scarce. Using traditional methods of tanning, treating and stitching, with components cast in metal and hand-carved from wood, the immediacy of the artisans’ relationship with their environment comes to the fore, demonstrating an interest in respectful and balanced interaction.

Kohler, one of the leading global kitchen and bath brands, presented Stone Flow and Rock.01 by Daniel Arsham, who created not only the sink (made by 3D printing in a number of only 99) but also a series of stone-like objects and shapes that reveal the exploration of his design process, which plays with organic shapes found in nature. In creating the exhibit, Kohler collaborated with DigDeep, a nonprofit organization that works to bring clean water to families on the Navajo Nation.

Lexus unveiled in collaboration with architect Germane Barnes of UM-University of Miami-an immersive installation inspired by the power and potential of Lexus’ LF-Z Electrified Concept car: the power of a zero-carbon future, powered solely by electric technology. The installation is a sculptural rendering of the car that lights up with LEDs -with customizable lights- via on/off switch. Participants were invited to create their own lighting scheme for the display, altering the colors of the walls, car, swings and furniture.

The ever-present Maison Perrier-Jouët, present at Design Miami/ since 2014, presented Embodied Nature, an interactive art installation by Austrian design studio “mischer’traxler” that invited guests to explore the interconnectedness of the relationship between man and nature. The installation composed of 100 species – including flora and fauna from around the world – was set up in a “cabinet de curiosités”: a space including an interactive mirror screen that portrays the viewer’s silhouette as if it were composed of all the different species, encouraging reflection on the relationship between humans and nature’s ecosystems.

Panerai used recycled and responsibly sourced materials for the various elements that made up its booth, entitled: “Dive into Sustainability.” The booth featured eco-friendly watches, from the latest collection, including the Submersible E-Lab ID. The watch is the first open source project in the luxury watch industry, a commitment by the brand to help move the world toward a more sustainable future. Panerai also celebrated its recent partnership with UNESCO for the Decades project, which aims to raise awareness of the Seven Principles of Ocean Literary.

In the Curio section, exhibitors explored new materials, among them Miami-based Bea Interiors Design, which sought to blur the boundaries between sculpture and functional design, pushing the limits of materials in unique and challenging ways as it develops organic forms.

But it is on the Friedman Benda Gallery, that the attention of the 17th edition of Design Miami/ is focused, especially in relation to the recent departure of the visionary Virgil Abloh, designer for Louis Vuitton and creator of the brand Off-White that has included street style in the luxury sector. Friedman Benda Gallery in New York exhibited the works of Samuel Ross -British-African-Caribbean multidisciplinary artist, designer and creator- with a singular innovative approach that combined the power of beauty with the sacred elements of toolbox design. “Ross will transmute the traditional fair booth into a quasi-industrial setting. The space, caught between construction and deconstruction, acts as a liminal staging ground for select works from three discrete but intersecting series: SIGNAL, AMORPHOUS STRAND and RAPTUR) Friedman Benda stated.  The three series extrapolate formal lines through colliding archetypes of West African furniture with references to modernism, brutalism, and color theory.

Above all, RAPTURE, with its lines combining marble forms resting on seemingly slender geometries of powder-coated steel, finished with Ross’ signature, captured the audience.

Like Virgil Abloh, Samuel Ross founded his own luxury menswear brand” A-COLD-WALL* which led him to sign important collaborations with Nike, Converse, Dr.Martens, Macintosh, Diesel’s Red Tag, Hublot and Louis Vuitton. He has won numerous prizes and awards, among them, in different areas, the British Fashion Award. His brand combines clothing with large-scale installations and sound design in an approach often summarized by the artist as: “a material study for social architecture. Ross is a philanthropist and with extreme concreteness is committed to Black Lives Matter.

Already a collaborator of Virgil Abloh, there are those who swear that he will be the next undisputed star in the fashion world.

(on the title, Virgil Abloh and Samuel Ross)

The LOWE Art Museum - University of Miami is pleas

A stop at the Jungle Plaza in the famed Miami Desi

(…)Specifically, the project for the Design Disc

A Poem in Four Letters by Terry Strickland. Oil on