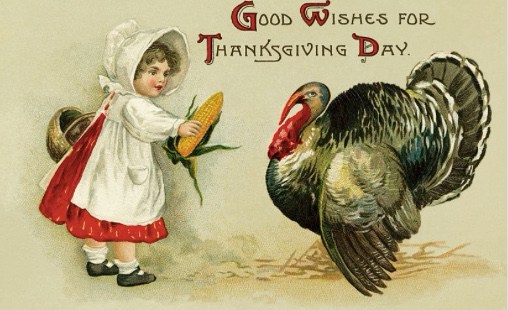 The story tells that in 1620 the Pilgrim Fathers of persecuted believers decided to leave England to try the New World and boarded the Mayflower arriving on the American coast after a grueling journey across the Atlantic Ocean.

Once settled in the new territories, they planted seeds they had from England, but the hostile climate, the winter at the gates and the adverse terrain did not favor any crop and through that year, the population was decimated. The following year,  Native Americans in a climate of cohabitation and moved to compassion taught guests what products to grow and which animals to breed: corn and turkeys. When the first harvest was made in November 1623, William Bradford, then governor of the colony founded by the pilgrim fathers at Plymouth in Massachusetts, gave orders to hold the Thanksgiving Day to thank God for the abundance of the harvest and for the luck they had. On the menu of that first American thanksgiving there were dishes that became tradition for the holidays, including turkey and pumpkin. 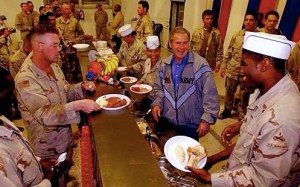 In the following centuries the tradition of Thanksgiving Day spread to the whole country but it was only with George Washington, first president of the United States of America in 1789, that it was decided to elect the fourth Thursday of November as the national celebration for thanksgiving. Since then, with the exception of Thomas Jefferson, of opposing ideas and some scholars who claim that thanksgiving is an admission of guilt for the suppression of Native Americans, every year the president of the United States celebrates a solemn speech and celebrates the feast day by eating with  soldiers. A couple of days before, it is tradition for  the White House to hold the ceremony of the “Two Turkeys Presidential Grace”, known as National Thanksgiving Turkey Presentation, dating back to 1963 and established by J.F. Kennedy. 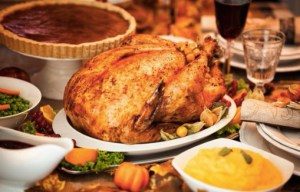 In the somewhat bizarre ceremony, two turkeys are spared to the diners and since 1989 the graceful gallinaceous open the parade on Main Street in Disneyland, California and are then moved to the Frontierland ranch. Starting in 2005 their transfer from Washington to Los Angeles takes place with a first class flight of United Airlines and since 2003 the American citizens are invited to choose the names of the lucky turkeys, among the most curious are: Biscuit and Gravy, Marshmallow and Yam, Pumpkin and Pecan, Popcorn and Caramel, Mac and Cheese and Flyer and Fryer, names of common dishes in the life of the American population. In addition to the deeply felt religious ceremony that generally ends with “Amazing Grace”, Thanksgiving Day meal is an equally important and time-consuming ceremony: it is customary to dedicate time to preparations starting from the Monday before the holiday. 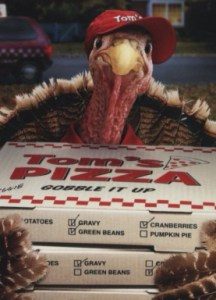 The main dish consists of turkey and it is calculated that 40% of turkeys on American soil are consumed during Thanksgiving Day. Combined with turkey what cannot miss is: stuffing  and gravy sauce (from reducing cooking to turkey) and then depending on the area: cranberry sauce, maize focaccia, wild rice, , a special type of rice produced in America symbolically dear to Native Americans as a sacred seed and gift of God. There are obviously traditional sweets: first of all the Pumpkin Pie, Pecan Pie and the classic Apple pie . With the end of Thanksgiving Day, in the late evening, the Holiday Season is officially open, the Christmas season, which sees its beginning with Black Friday, the day after Thanksgiving. The day of Black Friday shops open their doors at 6 am and are besieged by women, mostly, willing to do anything to not lose a pair of shoes from the bargain price as in the best American films that make us so much to dream.


The Andy Warhol Museum in Pittsburgh, PA, in celeb

EN- The article by Miami Niche in the journal of t