Terre Rybovich: the power of imprinting through the multi-track range of her body. 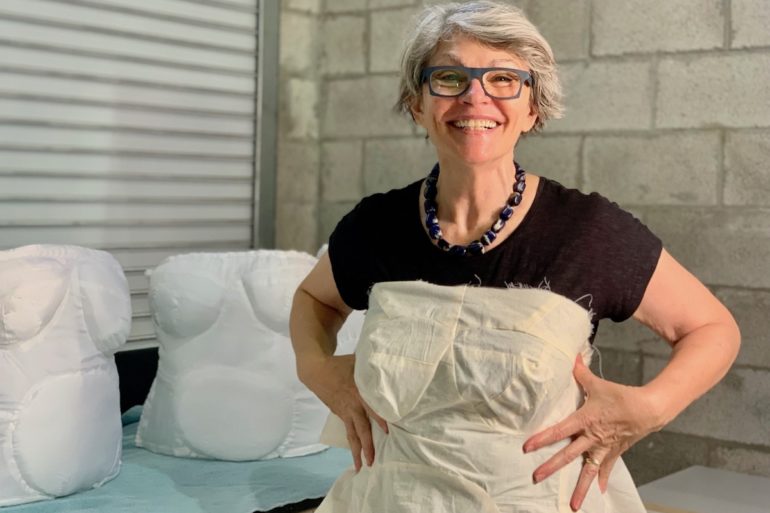 There are different ways in which to verge the art, that of Terre Rybovich is undoubtedly one of those more authentic because it consists of a multi-track range of body movements. Her body.

For Terre Rybovich, from West Palm Beach, passion and creativity are characteristics that flow in the family’s genetic imprinting. The famous Tommy Rybovich, her father, was the man who in the 40s created the first luxury sport fishing boat in Palm Beach, becoming the architect, along with the brothers, of Rybovich fame. Terre speaks and remembers her father’s blue boat models with nostalgia and deep respect, looking at the design of boats with referential rigor.

But if her father was involved in construction and nautical design, Terre cultivated her talents over time, initially studying economics and politics, and then becoming an activist in the social field.

Sixteen years ago she then decided to abandon the economic-political notions to make art, but still after some time she admits that the activism of the past was a courageous push that channeled into the artistic world.

The idea of ​​drawing with her body came years ago when, due to flu and high fever, she had delirium episodes that led her to enter this artistic form with which to create a generative and stimulating work on a large scale. The process is as simple as it is interesting: after covering the sheet of paper with compressed charcoal powder, she strips naked and rests on the sheet, letting her body leave its mark, body printing and composing it unconsciously.

Movement, conformation of the skin, pressure of the body and sedimentation of the charcoal, are components that affect the final result, which has as its main factor the role-played by chance. Chance, interpreted in the common game of dice as drawing of lots, represents for the artist, a fundamental element that allows her to understand how the human mind reacts in a totally unexpected way in front of creative inputs that it has not voluntarily generated.

After the physical work is on the sheet, Rybovich stops, and sits on a chair in silence, and at a safe distance observes for a long time the stabilized image of the charcoal. Every new design, in which the mind renounces its role as author, requires a period of acceptance before the mind recognizes the imprint of the body. With a shift of perception, and sometimes with the use of graphite and pastels, she elaborates and emphasizes other elements that the mind recognizes.

It is very easy to see in her unconscious compositions, somehow Michelangelo style, or Egon Schiele’s body twists. Her work becomes a profound spiritual connection that invites the observer, to explore black-gray areas that are connected to the collective memory.

Her works lay bare the unconscious, taking on depth with emotional contours that she sometimes deliberately emphasizes, incorporating small parts of color, with a preference of red.  She considers the red a very powerful color that becomes a kinetic projection of the self: beyond to give movement to the composition, it represents her unconscious exuberance.

Parallel to drawing and body art is Terre Rybovich’s passion for bird watching, this form of bird observation, to which she combines small-scale artistic representation In her studio. The works are exhibited on a metal structure vaguely reminiscent of an aviary that attracts the attention and it seems almost as if the birds are chirping. Unlike the corporal works, the birds that Terre studies, are represented in a very colorful shapes.

Her works boast several exhibitions in South Florida and are featuring in private collections, as well as being part of the Viewing Program of the Drawing Center in New York City since 2004.

Following the exhibition in Istanbul, Turkey, she became interested in Sufism, the art of Islamic mysticism, and in 2008 completed a tour entitled “The Naked Brush” in which she personally met gallerists around America, interested in her work, that was also followed by a blog, which represents the stages of her journey with unperturbed sincerity and beauty.

Among the latest paintings one is currently exhibited at the Ann Norton Sculpture Garden in West Palm Beach, on the occasion of the performance of “The art of Sherlock Holmes“, conceived by Phil Growick. The curator of the book, and author of numerous volumes who personally knows Terre Rybovich, and to celebrate the first volume, composed exclusively of illustrations by artists residing in West Palm Beach, each artist was given a story. Terre Rybovich illustration relates to the story of David Marcum, The Stolen Relic. In her work she portrays in her style the palm of his hands combined with the image of her as a child, the grayscale rhythm is broken by the red roses inserted at the bottom of the sheet that symbolically represent the scent of roses that according to legend, and the story represented, seems to come from the tomb of St. Nicholas of Bari.

If the creativity of the father has served for artistic imprinting, the legacy left by the mother is no less in the experimentation and production of her latest works. In her experimental works she researches images that are both beautiful and curious, and reproducing the teachings of cutting and sewing impartial by her mother, she produced a series of paper and fabric busts modeled on her torso. In 2015 he also produced sculptures based on maternal teachings: The sculptures depict her holding a pile of books on her head (the fundamental texts in her career as student) according to the way her mother had taught her to maintain a correct posture.

Many, infinite possibilities to interpret and compose art, and if we have the courage to put ourselves in first person with the desire to explore different communication channels with our body, we can really create something incredible, and as Terre Rybovich says: “Beauty looks at us, it’s up to us to take it “.

4 thoughts on “Terre Rybovich: the power of imprinting through the multi-track range of her body.”